“As the sun rose today, a traveller ventured into our village and told us about a plague, which had killed nearly half of his hometown before he left. His eyes were filled with fear and panic, so that nobody could doubt the truth of his words. To survive we left our village and are now travelling towards the coast and its harbours to leave this cursed country.”

Blood Trail is a turn-based exploration RPG about a small band of five medieval refugees who try to reach a harbour, fleeing a deadly plague. It was made for Ludum Dare 43 (Theme: "Sacrifices must be made").

The game is made of two parts: a map view, where you can command your group across a procedurally generated world with forests, cities and plains and random encounters: while travelling through the lands, you will randomly encounter friendly or evil people, with whom you can communicate or fight.

At the moment the game is rather a prototype and we appreciate every feedback we can get. The current version should provide a basic game flow and includes some features that were not finished in time for LudumDare.

Thanks for voting and helping BloodTrail on it's quest to become the 2021 Indie of the Year. You are now in with a chance to score some free games. Help this game secure more votes by embedding the widget (or link) we have included below on your favorite sites.

For LudumDare 43: "Sacrifices Must Be Made" we prepared BloodTrail, a turn-based exploration RPG, which puts you back in time to experience a medieval adventure. A plague is coming over your loved country and leaves a small group of survivors with no other options than to flee to a harbour and try to escape the doomed continent. During their journey they will encounter various other people, who might be hostile or not or something in between.

You command a group of randomly generated survivors across a 2D map to the nearest harbour. When moving across tiles, there is always a chance of meeting other people who either give you a chance for awkward social interactions or a fight. Fights are turn-based: each characters agility-stat determines the succession of their turns during which they may perform various attacks or defensive actions. Wise tactics, proper equipment and high character stats are needed to succeed.

Some people just want to talk: 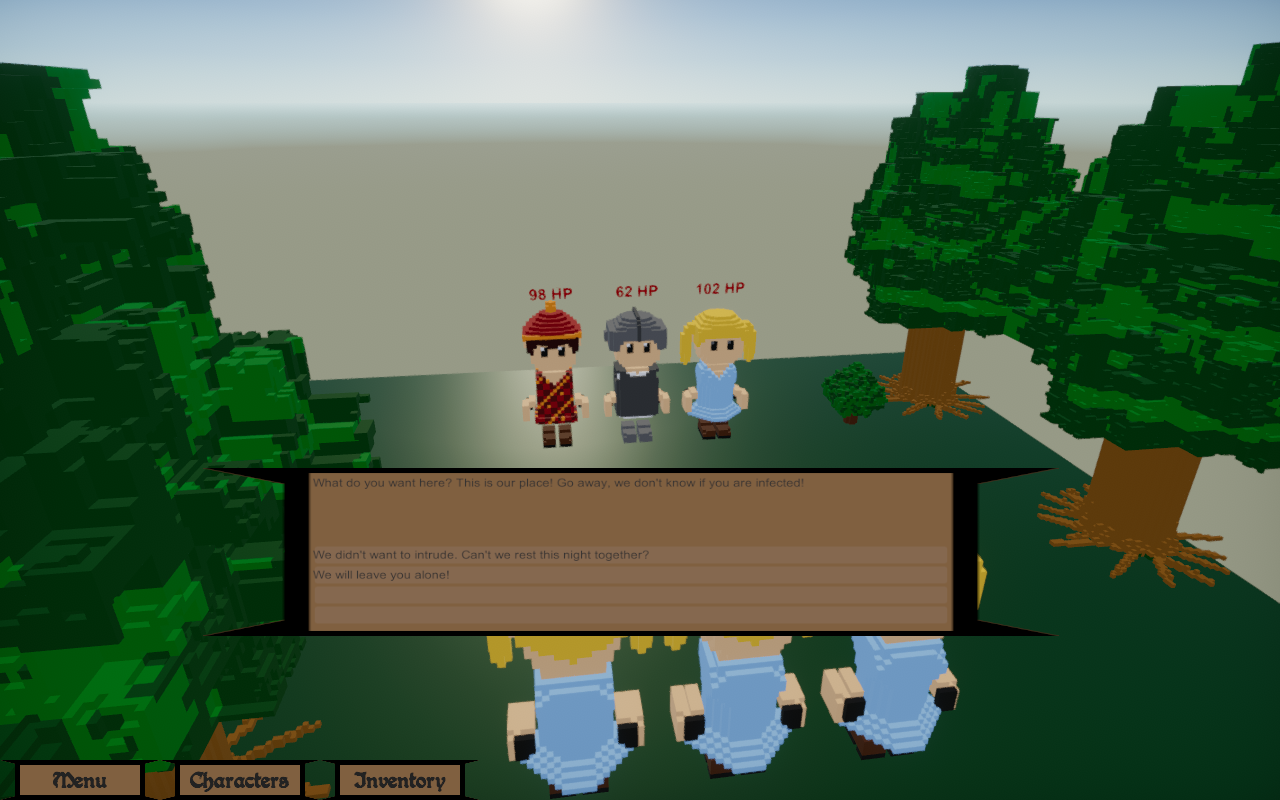 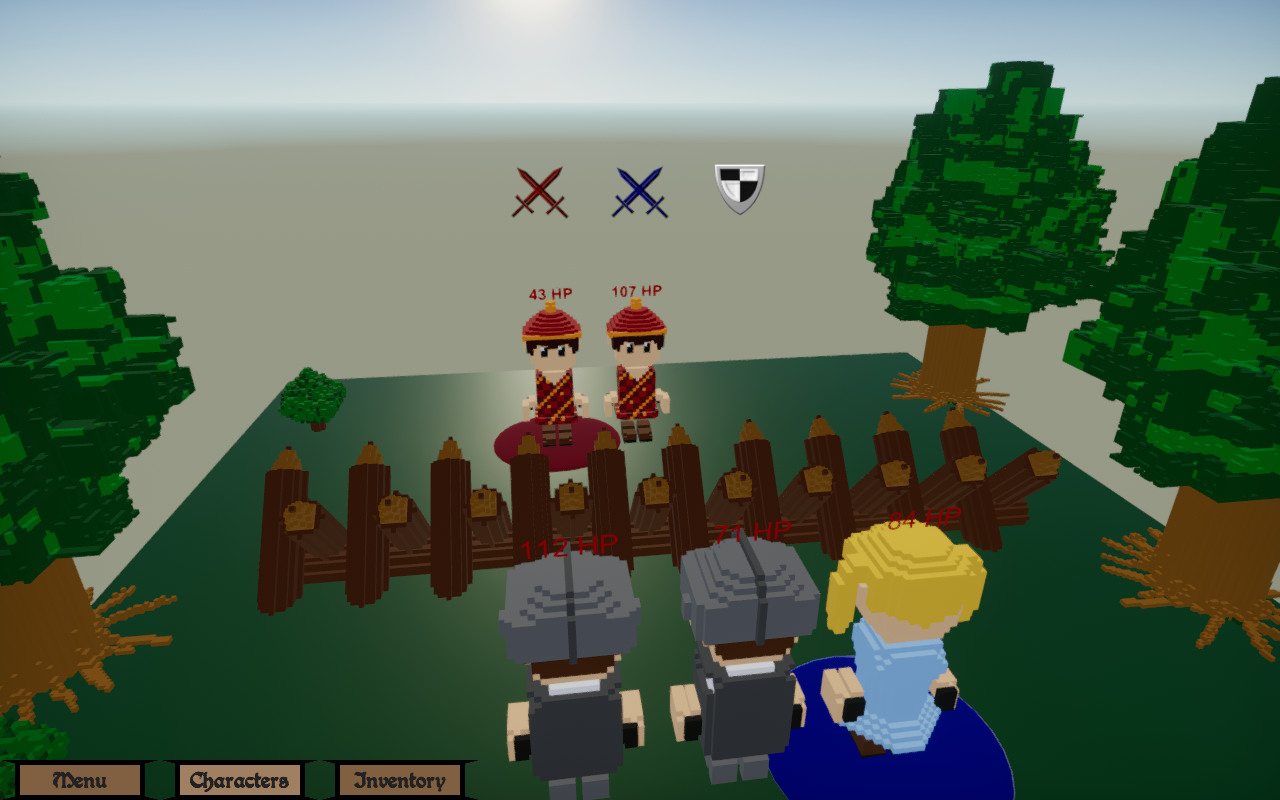 The maps are procedurally generated: 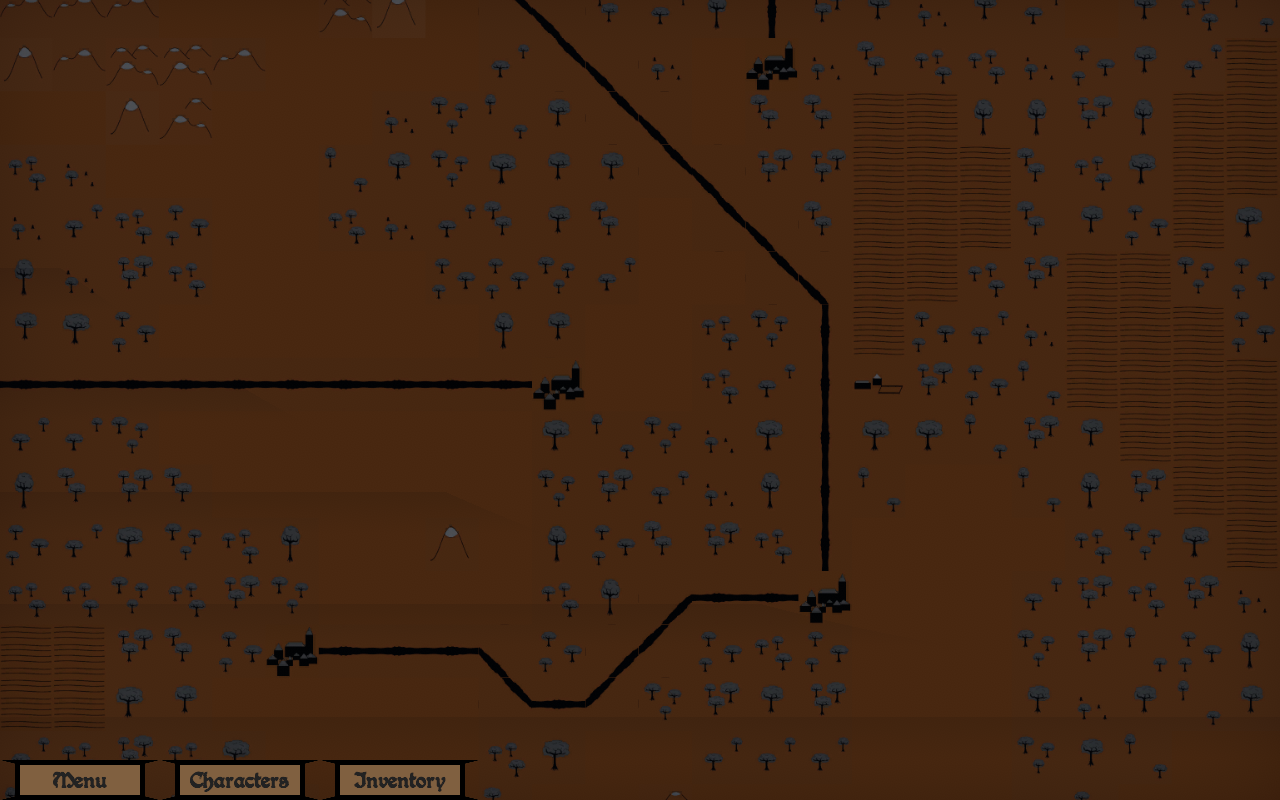 And mostly look like medieval traffic planners were always drunk: 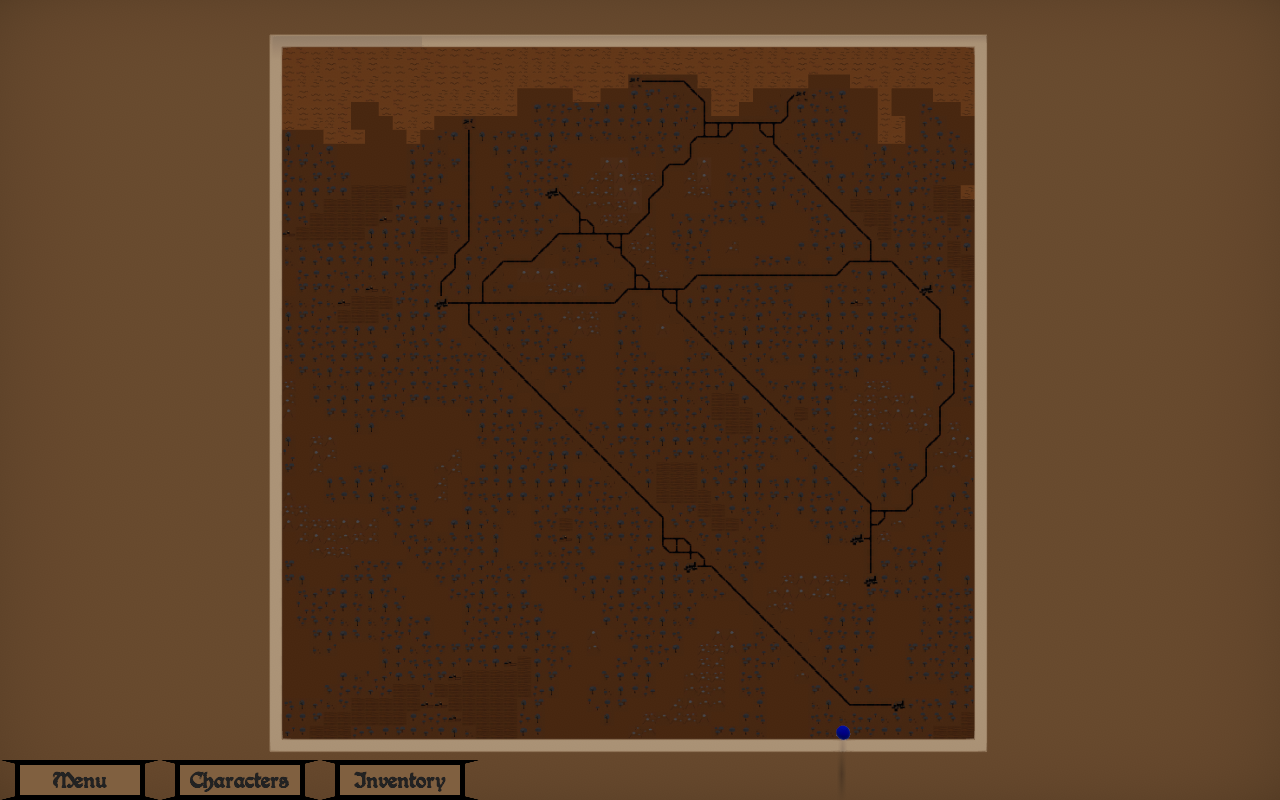 Every character has a fancy and almost pronouncable random generated name and random stats: 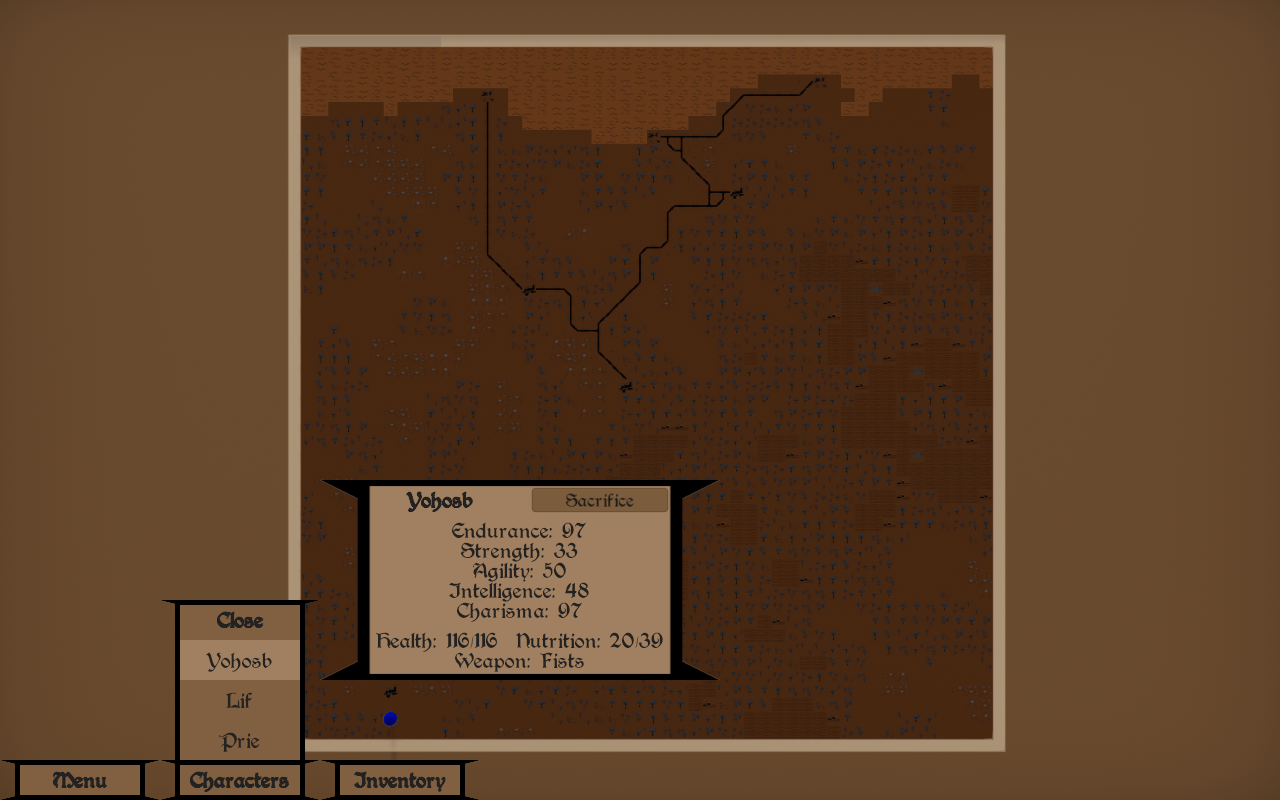 A raw draft of the inventory system is in place, we plan to improve on this for the next update: 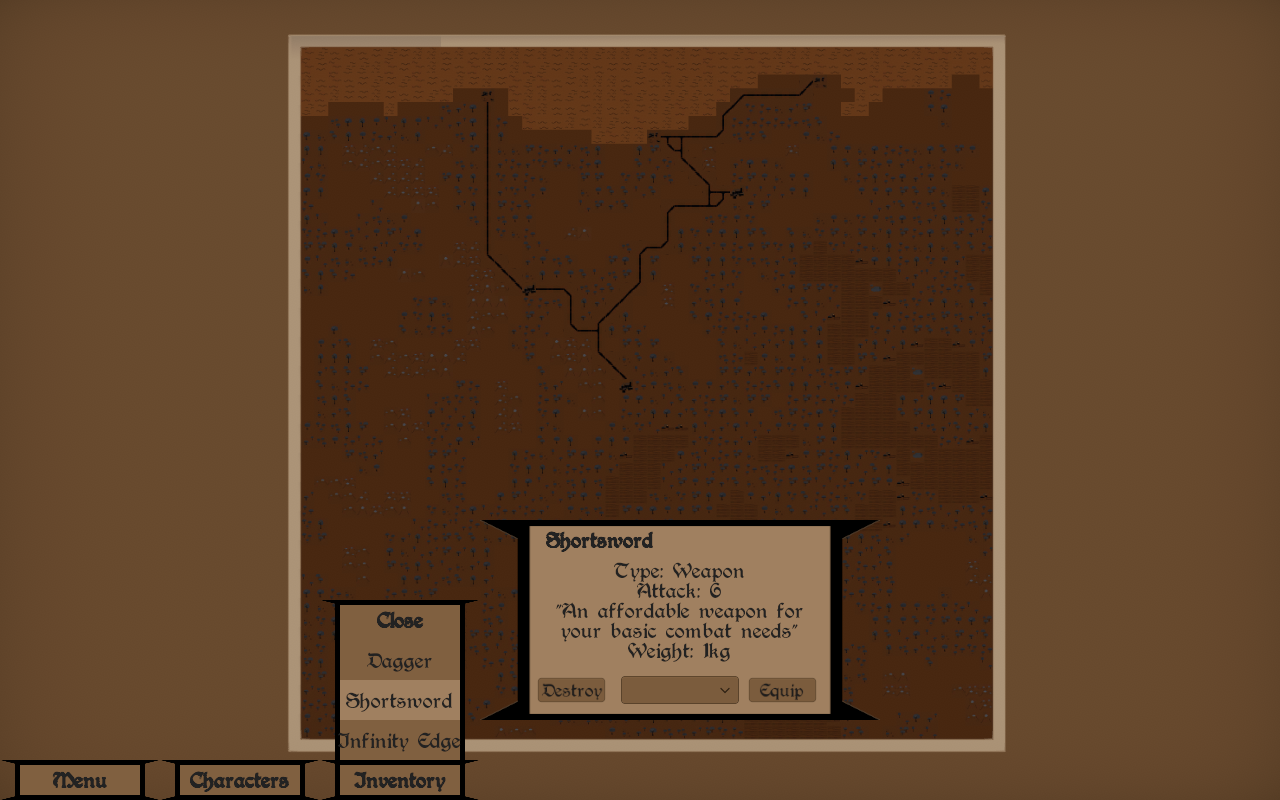 That sounds totally awesome and you already implemented all of this?

We decided to push the game out very early to ensure, that we are steering development into the right direction. That means, that we now have a playable prototype, but still many features are lacking. What is implemented now is movement across the map, basic fighting mechanics, a number of dialogues and a rudimentary inventory system, which allows you to equip your characters with weapons you spawned with. The most important missing features atm are support for more item types other than weapons and actual mechanics for getting new items. The dialogues for this are already in place, but not functional right now. We look forward to include this into our next version, together with more refined combat. To get a detailed view of our roadmap, please refer to our issue list on GitHub: Github.com

Nice, I cant wait to get my hands on it!

The game is released on itch.io: Fluffyvoxels.itch.io

The games sourcecode and old versions are available on GitHub: Github.com

After tinkering on our LudumDare 43 submission for some weeks, we finally decided to push out an early access version on itch.io to get some more feedback.

No Turning Back Roguelike