Kraden's Crypt is a momentum driven, rogue-like, dungeon crawler currently under development. Our target platforms are Windows, Linux and Mac. Are you brave enough to enter the domains of Kraden and face the creatures that there dwell?

We have received many requests from players who felt that it was unreasonably difficult to block character motion when a melee weapon is being held. So we decided to get rid of this restriction for now, and see how players will react. Note that the usage of ranged weapons will still prevent your character to move.

Another great improvement on this release is that the assets are now being loaded asynchronously. This means that we can have animated loading screens, and the game no longer displays a “not responding” status on Windows while loading.

You can find the latest version in the download section

After a very busy few months, our team have been working hard to get something out to the public. We decided to launch a Greenlight, Kickstarter and an...

This is the story of how we attempted to improve player experience based on feedback we got from our attendance to the London Anime&Gaming Con.

Bull boss, new sounds, random level generation, new spells, character outer glow... those were the remaining adjustments we did before presenting our...

Kraden's Crypt is a skill based rogue-like game with physics elements. It currently supports single player and couch co-op modes.

Kraden's Crypt is a skill based rogue-like game with physics elements. It currently supports single player and couch co-op modes.

Hi, I'm Joe Davies. I am a final year college student in Swansea Metropolitan University. My course is in Illustration, but I have a deep interest for video game design. Which is why for my major project of my final year, I would like to design a video game. By that, I mean I can provide character designs, concept designs and even environmental designs to the development of a game.

I came across your game, Kraden's Crypt, on Kickstarter and I found its visual style compatible with the style I work with. This is why I would like to help you design this game as my major project in my final year in college. As such, I will not ask to be paid, however I will ask for permission to use whatever designs I make for this game for an exhibition that will be held at the end of my year.

I can't show examples of my work through this comment, but I can give you a link to my DeviantArt gallery which should give you an idea of the kind of art style I have.

Thank you for your time in reading this, and I look forward to hearing from you.

I made a video preview to show off some of the features and gameplay of this game!
Youtu.be
I hope you enjoy!
Martyr 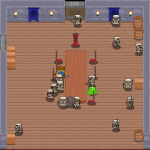