The last month has been incredibly busy with all sorts of interesting things, and lots of technical challenges. In this development update, I talk about design and programming, lots of user testing, bug fixes, and an awards nomination! Here's what's been happening.

Posted by PhilipBuchanan on Apr 9th, 2018

39 Days to Mars is a two player co-operative adventure game, and it's launching in just under two weeks! You can watch the trailer here and add it to your Steam wishlist here.

The last month has been incredibly busy with all sorts of interesting things, and lots of technical challenges. In this development update, I talk about design and programming, lots of user testing, bug fixes, and an awards nomination! Here's what's been happening:

Play by Play is New Zealand's International Games Festival, held each April. The exciting news this year is that 39 Days to Mars is a finalist in the play by play awards! The game will be showcased from the 16th until the 21st in a games exhibition on the Wellington waterfront, with the awards ceremony on the 21st. I'll be there, so keep an eye on my twitter or discord for updates!

There are four major areas I've been focusing on leading up to launch: design, bugs, polish and marketing. Juggling the importance of each task is always difficult, and often the hardest to judge are changes in the design. I'm tracking how people play the game, and running as many playtests as I can, trying to balance out the last of the problems before it's released to the public. The risk at this point is that there's little time left for testing, and making major changes could potentially cause bigger issues than they solve!

However, the controls puzzle - which I've already talked about multiple times - was still causing a lot of confusion, and I was worried that launching without changes would leave a large number of players stuck and frustrated. Something had to change. 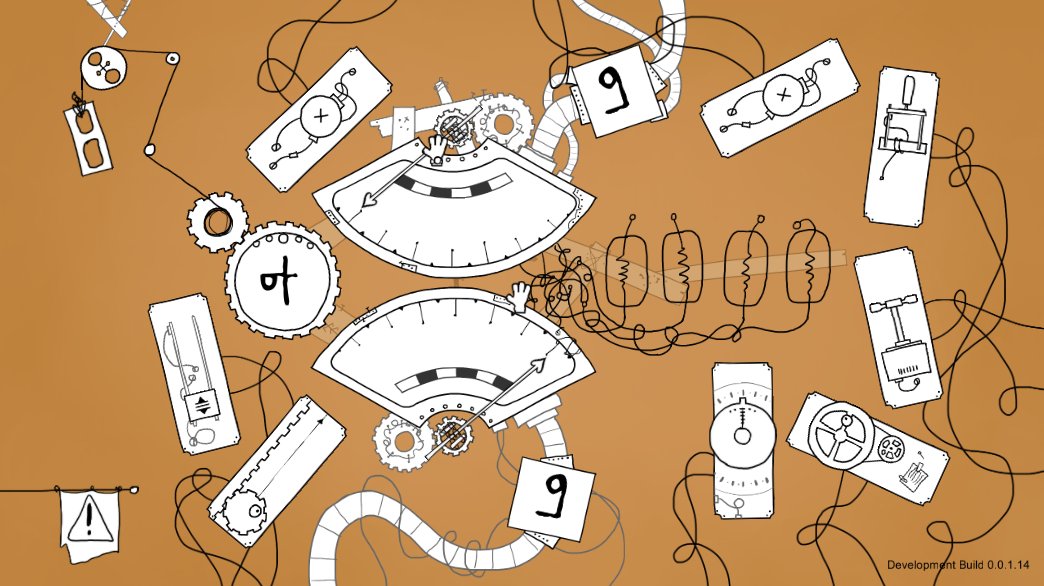 It wasn't obvious that the goal was to match all three symbols together, and there were two major reasons why this was the case.

One was that there were too many layers of indirection between the player's input and the result. You can see above in the old version how there are two gauges, and the needles pointed to little marks along the edge. Each mark represented a symbol, which is shown in the square beside the gauge. These symbols are connected by wires to show they are related. Even though each step makes sense by itself, there's simply too much information in too many different places to easily process.

Additionally, there was a lack of feedback for each part of this process, and when you did make progress everything moved too quickly and with too few effects to be obvious what was happening. Often solving parts of the puzzle was done by accident, and was so unclear that even after a success you still weren't sure *why* you had made progress. 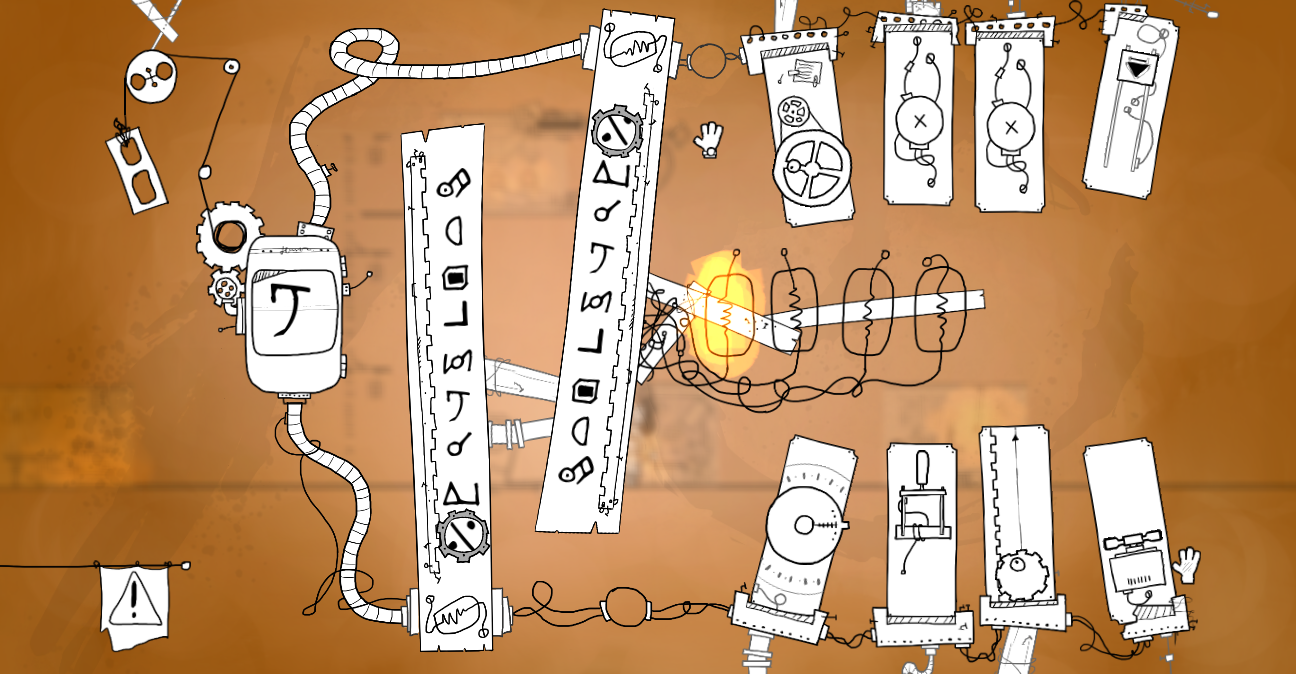 I made two changes that I hope will solve these problems. The first was to remove the gauges completely and replace them with a list of symbols. The pointer directly shows the symbol, removing a lot of the indirection. Additionally, I made a new effect for success, that takes longer and shows a clear progression of which part of the puzzle is driving the rest.

Between the two changes, the puzzle became much more easily readable.

In addition, I re-made the effect for when the puzzle is broken. Because there is a much more obvious use of symbols in the puzzle, the effect was easier to design and strikes a nice balance between relevant, irritating, and funny.

In addition to a couple of major changes, I've fixed hundreds of tiny bugs and graphical glitches, things that won't prevent the release of the game, but it's nice to have them fixed so that 39 Days to Mars plays as smoothly as possible. 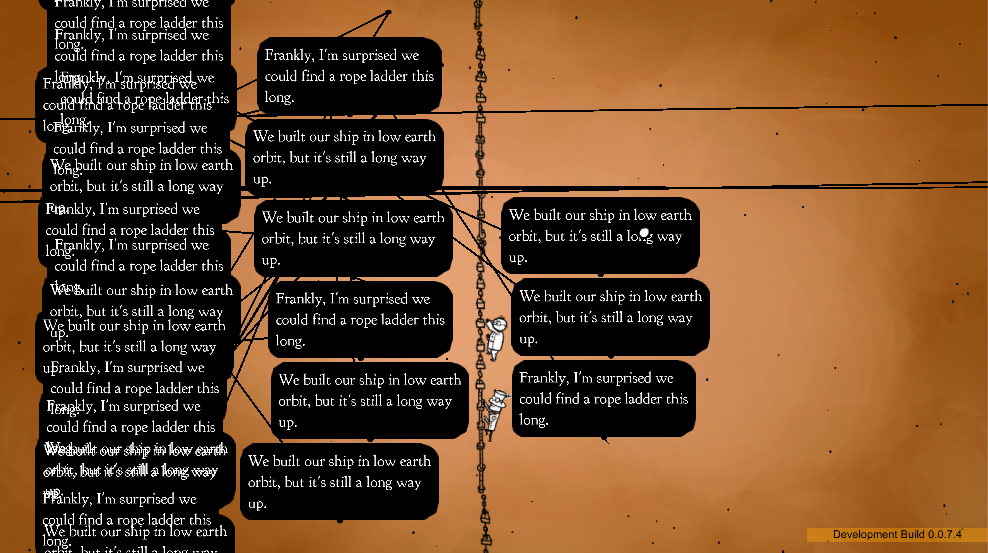 A slight issue with speech bubbles. 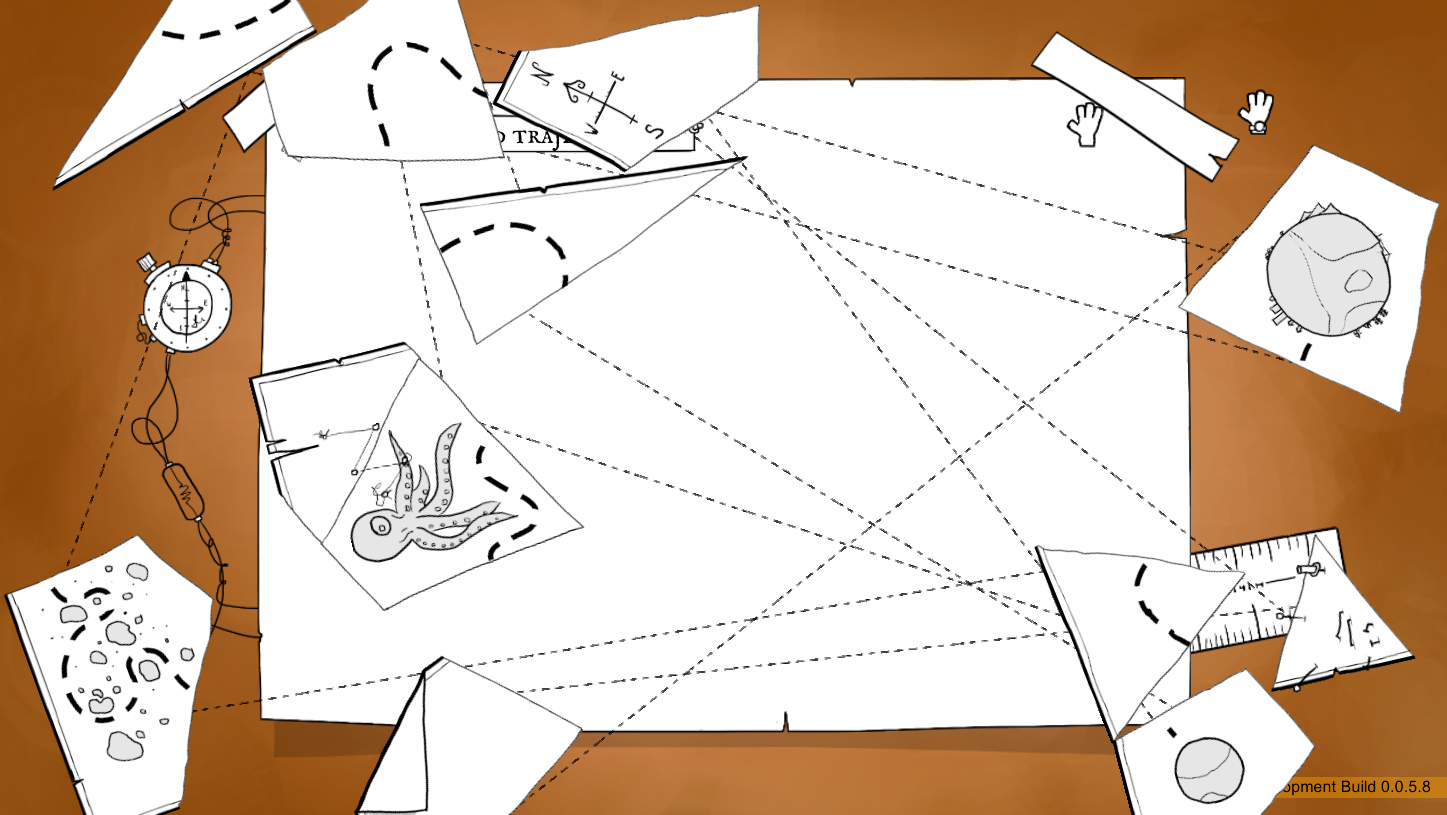 Let's talk! There's a discord channel for 39 Days to Mars, which you can join by clicking here:

Come and chat about 39 Days to Mars in real-time. I'm usually around to answer questions and chat about the game, and when I remember, I also post about what I'm working on.

In the next two weeks I'll be fixing the remaining bugs, and getting ready for launch! Next I'll be talking about more in-depth next week, in the last update before 39 Days to Mars launches!

As always, leave your comments or questions below, and don't forget to add 39 Days to Mars to your steam wishlist!

Good luck guys! May the videogame gods be with all of you :)