What to do with long dialogue in a game? Besides get rid of it? Walk-and-Talk for the win!

I love a good walk-and-talk, in real life, in movies/TV, and especially, in video games.

Following Wheatley around in Portal 2 while he gave dubious advice was a blast. I knew that those corridors were dialogue delivery mechanisms, contrived to make what amounts to an interactive cutscene. But the seamless integration of story and gameplay worked perfectly for me. To this day, I still think of Portal 2 as the gold standard for conveying dialogue while letting the player move through the game.

So it’s no surprise that I use some of the same tricks and sensibilities in my game.

There’s this level in The Godkiller called “Precipitalus”. It’s got a “dark city” vibe to it.

Story-wise, I wanted something big to happen here. So far, I’ve been ruthlessly spartan in explaining how this world works. In Precipitalus, the player would be about two-thirds through the game. I felt they were ready to get some questions answered. If I hit the player with that stuff at the beginning, it’s just boring backstory and exposition.

Brief story summary: Emm, the main character, is born into an afterlife that she doesn’t understand. She’s introduced to new people and rules of reality as she explores. Thematically, it’s a bit like Alice in Wonderland or Gulliver’s Travels.

I wrote about three minutes of dialogue to be spoken by a new character, Baldface, who’s a savvy, realpolitik type. Three minutes is a monstrous amount of dialogue for a game. I cut it down to one. One minute is still a helluva lot. Is the player going to want to sit still and listen for a whole frigging 60 seconds? I think not.

So I used the “walk-and-talk” technique. Baldface says, “Hey, can we go for a walk?” He darts out the backdoor of his office, and starts a Sorkinesque spiel as Emm trots along.

The player can depart from the talk at anytime, excusing herself. If the player then brings Emm back to Baldface, he’ll resume the walk-and-talk using the interruption algorithm that I explained earlier in this article. So as the player, you do what you want in the level, and the game responds to you.

It works quite well. And I like it much better than having Baldface stand behind a desk while spouting his monologue.

One last thing… the screenshot at the top of the article for Baldface’s office had some placeholder 3D models in it. I’m getting some help from Ian Zimmerman to properly furnish it. 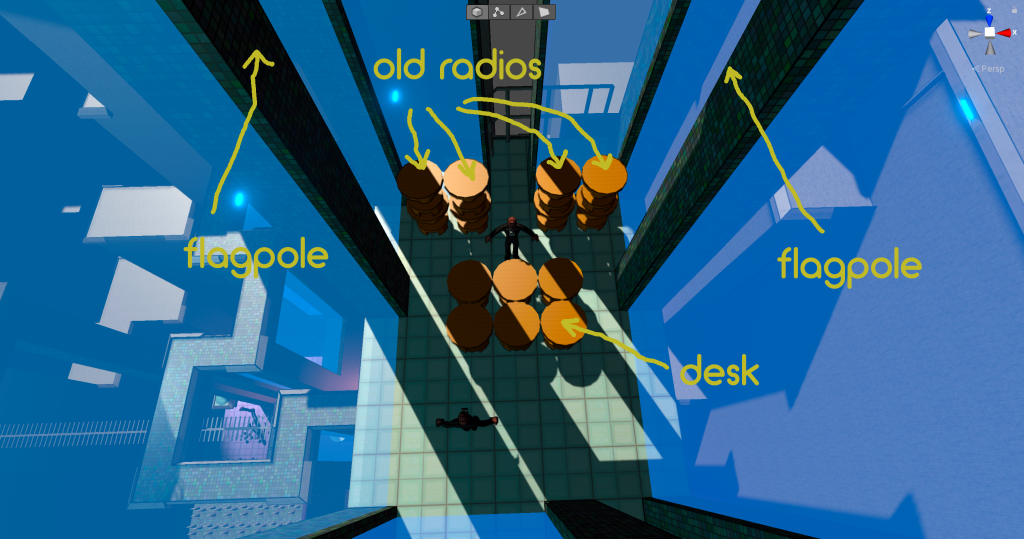 This is my unborn child- I mean my game, The Godkiller. My baby wants to be wishlisted on Steam!