The curse is also the gift. Some things that indies can do better than the big studios.

Years back, I was hired to work on games by Webfoot Technologies, a scrappy double-A studio that pushed out an impressive number of titles. I scripted a bunch of the levels on a Gameboy Advance title called Dragonball Z: Buu’s Fury. I’m going to pick on one part of the development process that was sub-optimal. But I hastily add that it’s a solid game – nothing to be ashamed of. People liked this game. I’ve talked to some of them.

You’ve maybe heard of Dragonball Z and Funimation. Who do you think wrote the character dialogue for the game?

Funimation. Not me. Not Webfoot. Super-definitely Funimation.

Are they going to entrust a bunch of contract game developers to put words in the mouths of their beloved-by-many characters? Of course not! And they were understandably inflexible about making changes to the dialogue based on what the developers said. If the door wasn’t completely shut on feedback, I would have humbly suggested they cut down the length of some of the text. 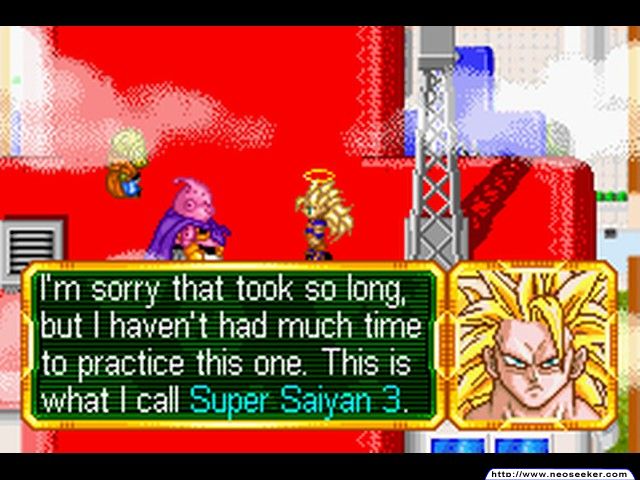 Imagine hitting the “A” button for five minutes on a handheld device to read paragraphs about the Triple-Super-Duper-Fusion-Saiyan transformation.

But also, there’s times where the people writing dialogue should look at the game and draw inspiration from the level. You might notice for example, that Goku has walked up ten stories of stairs and have him say, “That’s a lot of stairs!” I’ve written tens of pages of dialogue this year by just staring at a level inside the scene view in Unity, and thinking… what would be fun to have happen here? The story and level design can influence each other iteratively. Also, you can pay attention to what playtesters are actually thinking and doing in the game to make an empathetic bond between the character and the player. (More about this in my “What’s Better than Player Empathy?” article.)

I’m not just spouting flimsy game design aspirations. I’ve made games like DROD where story is tightly meshed with the gameplay. Yestin Harrison wrote in his rebind.io review:

Here is the crux of DROD’s genius: the story serves immersion. It is not separate from the levels; it is interleaved to the extent that it could not be separated. It is not the reward for solving a level; it is the level.

Exactly. He gets it.

Dragonball Z: Buu’s Fury was a game based on well-known IP, so the constraints are justifiable. Here, the “story” department was connected, via the thinnest corpus callosum, with the “dev” department. And information flowed in just one direction. Any typical modern software project with more than 5 people working on it will probably suffer from the same problem. Companies are trying to do big things fast, so they have different teams working on different aspects of production. There are cross-team meetings, specs, story bibles, mock-ups, and demos to help build a common vision of what the product is going to be.

Scaling to deliver large projects requires you design the production effort to minimize communication. If you are making a large game, you do not want a massive all-hands general assembly with hundreds of people every day. Nor do you want five small cross-team meetings every day, pulling your developers, level designers, artists, musicians, etc. away from their desks where they could be getting work done.

(mild to medium game spoilers for The Godkiller ahead)

Now let’s head back to Indieland with me and my underdog game, The Godkiller, a Sokoban-like puzzler set inside a large story. My “team” is me doing 95% of the work and hiring a few specialists along the way. I will show you what I can do easily that an Activision or Electronic Arts cannot.

I’m working on this level today. Here’s a quick shot of it halfway finished. 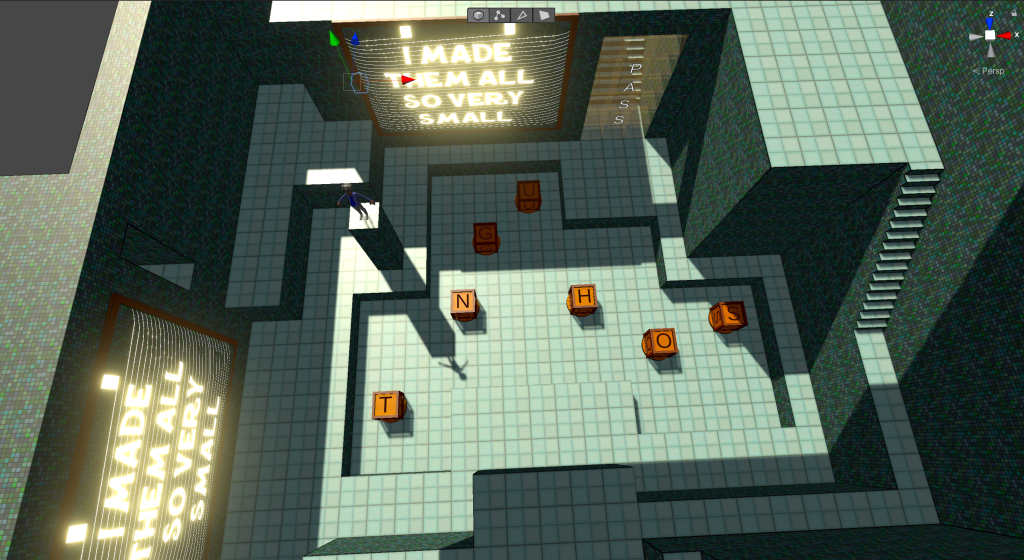 It’s a room where Emm, the main character, takes an “entrance exam” involving pushing some blocks around to spell words. If she passes the exam, she’s allowed entry into an exclusive, special place called the “All-Blocks Plateau”.

You can see a little man standing on top of a column. (Apologies, I haven’t done the lighting in this level yet. You’re looking at Disneyland before the park is ready to open.) 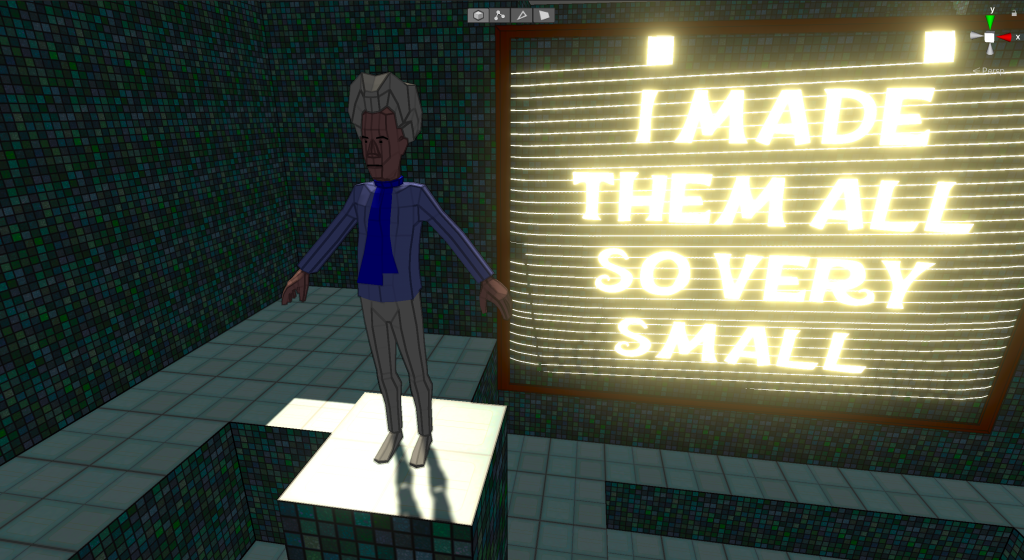 This guy’s name is “The Songleader”. His job is to administer the test. I was going to have a different character here called “The Proctor”, who would be a no-nonsense-but-fair sort of person. But the “project manager” part of my brain thought about using The Songleader instead, who is a character that already appears in a different part of the game. An artist, Bettina Throckmorton, is busy making animated face assets for The Songleader. 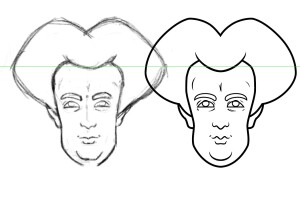 I’m already invested (with actual money) in this character, whereas I haven’t commissioned any art for the newly imagined “Proctor” character. The “story writer” part of my brain also wants a little more screentime for The Songleader so the player can get to know him. So I make a decision, quick and simple, to reuse The Songleader in this scene.

And then I think… but he’s the song leader. In the other scene, which comes later, he actually leads a song and his name/title makes sense. And if this is the first scene that he appears in, the player will notice through game UI that he has this “song leader” title. So it seems like he should do something musical.

I spent 30 minutes this morning writing a song that includes all the instructions the player will receive while taking the test.

Gut, gut, gut.
No stomachs, but
We can have a hunch
With some tiny luck.
.

…and there’s five more verses like that. I can hear the melody in my head. It’s got harpsichords. I’ll work it up in Logic X Pro later. Let’s be real – my song won’t be as good as a Jonathan Coulton masterpiece written for Valve. But it will be likable, fit the game well, and express me as the creator. And it will get decided upon and created in one-tenth the time that an AAA studio would take.

The “developer” part of my brain understands exactly what should be done to make The Songleader begin each verse at the right time, in response to the player’s movements in the level. So in this quick “meeting” with the different parts of my brain, the “developer” nods his head like a curmudgeonly Gilfoyle. “It will work.”

The conversation between the different parts of my brain roils. It’s thoughts like:

This is the kind of stuff that can take weeks of cross-team communication to figure out on an AAA title. And for me, it’s all done in one morning. Sometimes, it’s good to be indie.

The Godkiller is a 3D puzzle-solving adventure game under development. It will release January 1st, 2022 on Steam for Windows and Mac. Wishlist today!