Post feature RSS The one problem with all tower defense games

I talk about a design flaw that all tower defenses have, and how Whitevale Defender fixes it.

I've played a crap ton of tower defense games and there's this one design choice that has always bugged me. I've always had to just deal with it because I was powerless to change it. Well, now that I'm creating my own tower defense game I finally have the opportunity to fix it! The central idea that I will be talking about revolves around the concept of a Positive Feedback Loop. I'll dive into more detail on that but first let me explain the design flaw.

The in-game money increases with each kill

In both Desktop Tower Defense and Skibi's Castle TD you can even see a floating +1 above the enemies head after a kill.

That feels pretty good because you're getting rewarded for doing a good job. What that boils down to is the better you defend, the better you'll be able to defend in the future. Take a look at the diagram below for an illustration of this. 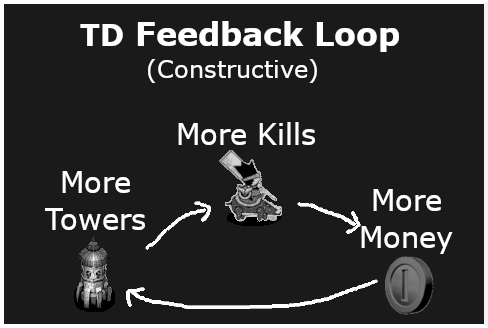 I'm going to take a brief detour and talk about what a feedback loop is.

These feedback loops are found in many places throughout the world. In nature, the human body, weather, & engineering. The diagram above illustrates a feedback loop that positive and constructive. Constructive simply means the loop is beneficial to the player.

Ok back tower defenses. But let's think about the opposite effect. What if you place a tower in a bad position, don't build the correct tower to counter the enemy type, or you don't upgrade in time before the next wave starts? Well you still get a positive feedback loop except it works against the player, a destructive positive feedback loop. 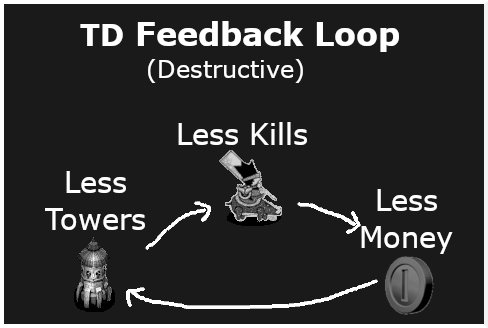 Inevitable failure with one mistake

So if you make one mistake as a player, it puts you on a path towards an inevitable failure. If you mess up in the first few waves, you might as well quit. But most player's won't quit that early. They will give it their all and try to make the best out of a bad situation. This often ends up with the player wasting 20 - 40 minutes of their time thinking they can win, when it may be impossible. As a player it feels really crappy.

Ok so how does Whitevale Defender fix this design flaw?

1) You get a fixed amount of in-game money (minerals) each wave, regardless of performance

So if you place your towers in great positions and you have a perfect wave, you receive 30 minerals. Also, if you don't build enough towers before the wave begins and you leak 10 enemies, you still receive 30 minerals. So there is always an opportunity to re-adjust your strategy and still win the game, even if you only have 1 health left!

Minerals you receive each wave

The special tower is called the mining drill. You can build them over the top of mineral stones randomly placed around the map. Then the drill will give you a small amount of minerals over time. You can also build multiple drills at once to really get the income flowing. This allows you tightly control the positive feedback loop in your favor. The more drills you build, the more money you get, the more towers you can build.

So there you have it. I explained the design flaw in most tower defenses and how my game Whitevale Defender fixes it. I think it is a breath of fresh air to tower defense games. If you are a fan of the tower defense genre, I know you will really enjoy how the new system works.

but then how will you balance the waves of enemies to make it progressively harder --- what you've done is just made it so in the end you will have to be a pro and mine all the mineral spots to have enough to beat the last wave, it's just adding in a boring mini game / detracting from the purpose of stopping units getting from A >> B

Hello. As an avid tower defense player, I understand your concern. I've been very careful about the balance of towers, enemies, and resources so it's challenging.

In my opinion, just building towers and watching the enemies go by is kind of boring. Adding a touch of resource management adds a layer of depth.

The mining actually adds a lot of interesting decisions to be made. Such as:

- timing (mines cost money so you have to balance short term loss vs long term gain)
- number of mines (if you build too little you won't have enough money towards the end, and if you build too many you'll have wasted your money and not have enough towers)
- upgrades (you can upgrade them so they mine faster, but you only have so many upgrade points and cannot upgrade everything) (if you dump all your points into the mine, your towers will not be powerful enough)

But don't worry, managing your resources is just a small part of the game. You still have to worry about the position of towers, especially because the map has multiple paths that criss cross, and upgrading them.