Post feature RSS The Mysteries of the Southern Continent

This week’s lore post is about the various mysteries that Charles will encounter (and hopefully solve) in the southern continent of the Animal Kingdom while searching for the origins of the Ark Fantastic.

This week’s lore post is about the various mysteries that Charles will encounter (and hopefully solve) in the southern continent of the Animal Kingdom while searching for the origins of the Ark Fantastic (this being the second act of the game).

Since we don’t have many art assets for the southern continent yet, this blogpost will be filled with pictures of the step-by-step artwork process for our first artwork ever – the three protagonists exploring the southern jungles.

This artwork was done way back in 2018 when we still had many different ideas on what exactly we want out of the game, and served as one of only a few mock-up pieces we sent to our Creative Europe application in 2019. In a way, the pictures tell their own, separate narrative from the text, and hopefully, both are equally interesting.

The Mysteries of the Southern Continent 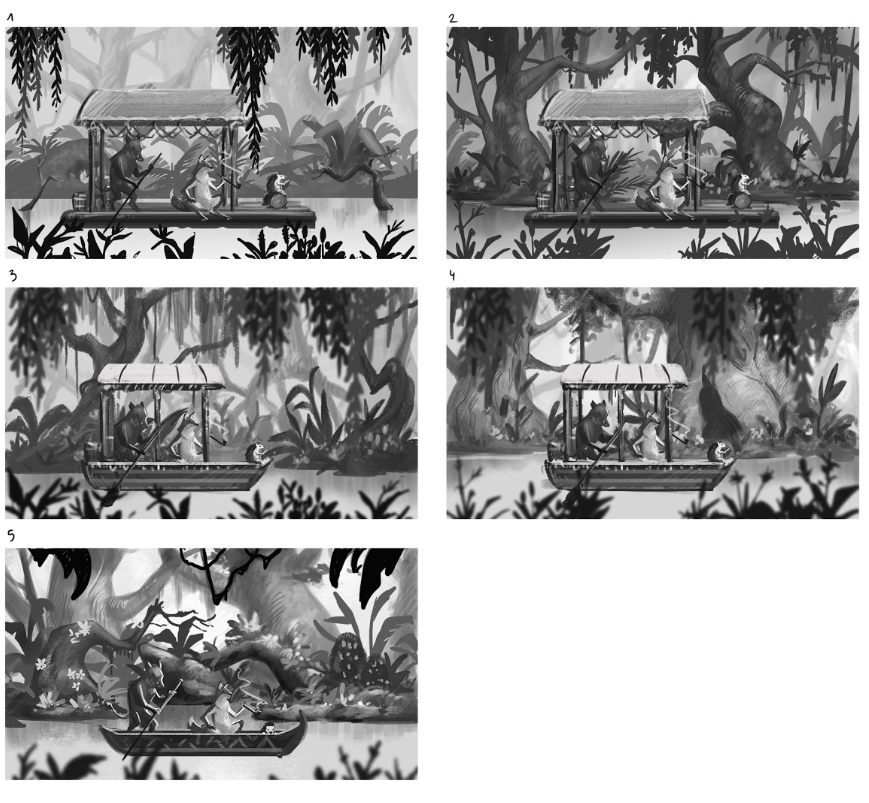 For as long as collective memory serves, the Kingdom has been a large landmass, surrounded by sea on all sides. This is the continent we now call Kingdom Proper. However, a new southern continent was found during the recent times of King Michaël.

This caused major ontological and cosmological troubles for the scholars of the Kingdom – how to fit this new continent into the world we thought was just a single landmass surrounded by sea and nothing else? Many hermeneutical ideas about the Ark myth had to be done away with, and many more had to be re-framed to fit newfound truths – such as the existence of monkeys, crocodiles and various birds found on the southern continent, all of which bear no mention in the Ark myth. At least not in its modern form. 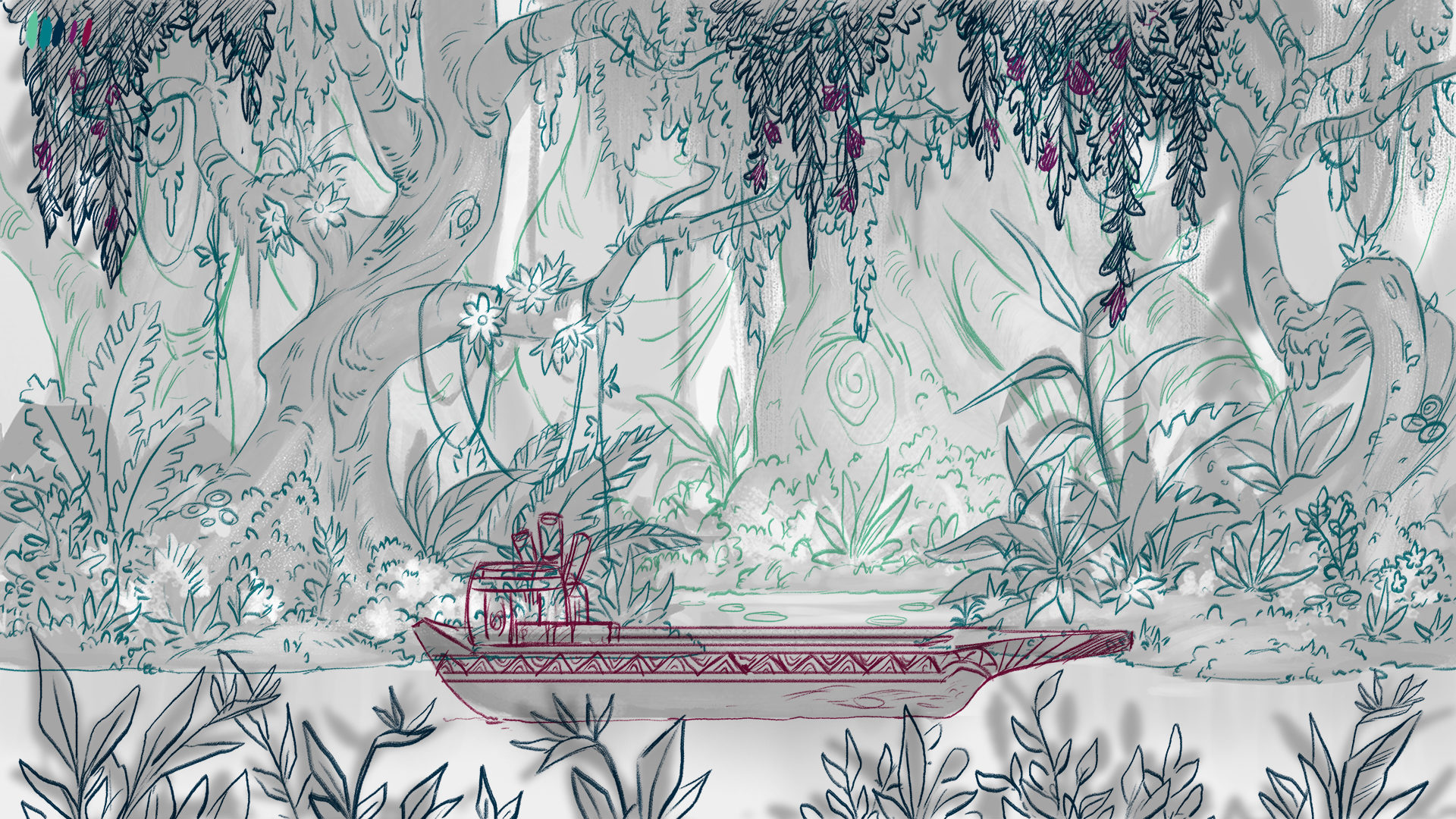 While technically a part of the Kingdom in its entirety, the Colonial Continent is very different from the Kingdom Proper. The flora and fauna are very different, and even the land behaves strangely – whenever Vincent’s expeditions tried to set a foothold deeper in the continent, rivers would dry out, like they had a mind of their own, and new ones would spring from dry beds… There have been many old-wives tales and folklore pertaining to ghosts and river spirits, all scorned by serious scholars of course, but unfortunately no scientific explanation has yet to be found for this erratic and the seemingly “intelligent” and maybe even “mischievous” behaviour of the southern waters. 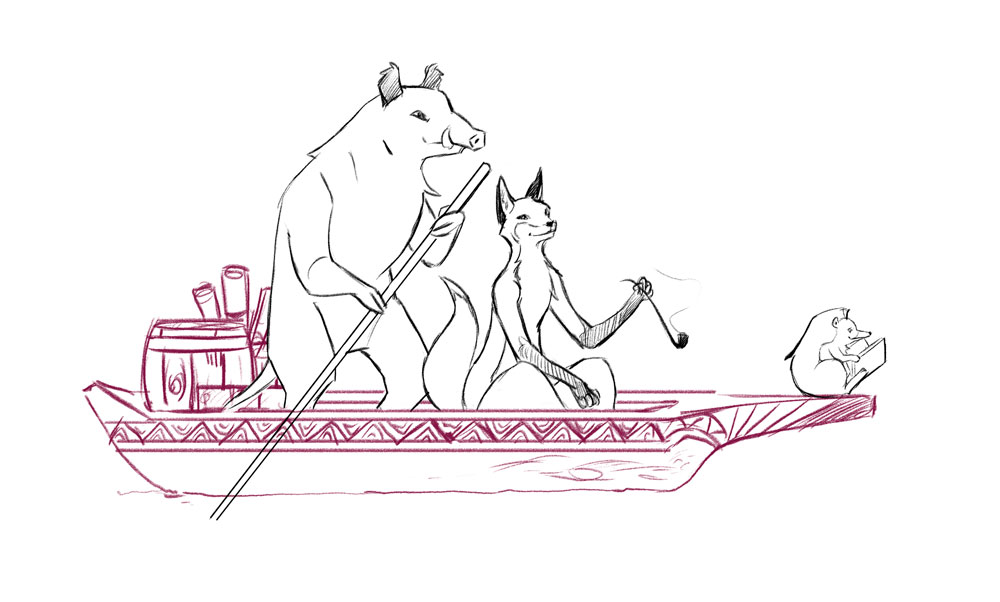 The Valley of Gilliam

While the river mystery has puzzled the scholars for centuries, but it is not the most interesting one, by far. No, the most alluring mystery of the colony is the myth of the “Valley of Gilliam”.

The Gilliam mountains in the deeper reaches of the continent are where many monkeys dwell in huts and villages, but there has often been talk of a secret valley hidden in the mountains, that holds the City of Gold, a city built by monkeys and hidden from the colony. Explorers have devoted their entire lives to the scouring of the mountains in an attempt to find anything of the sort, to much derisive laughter of the local monkeys, but to no avail. 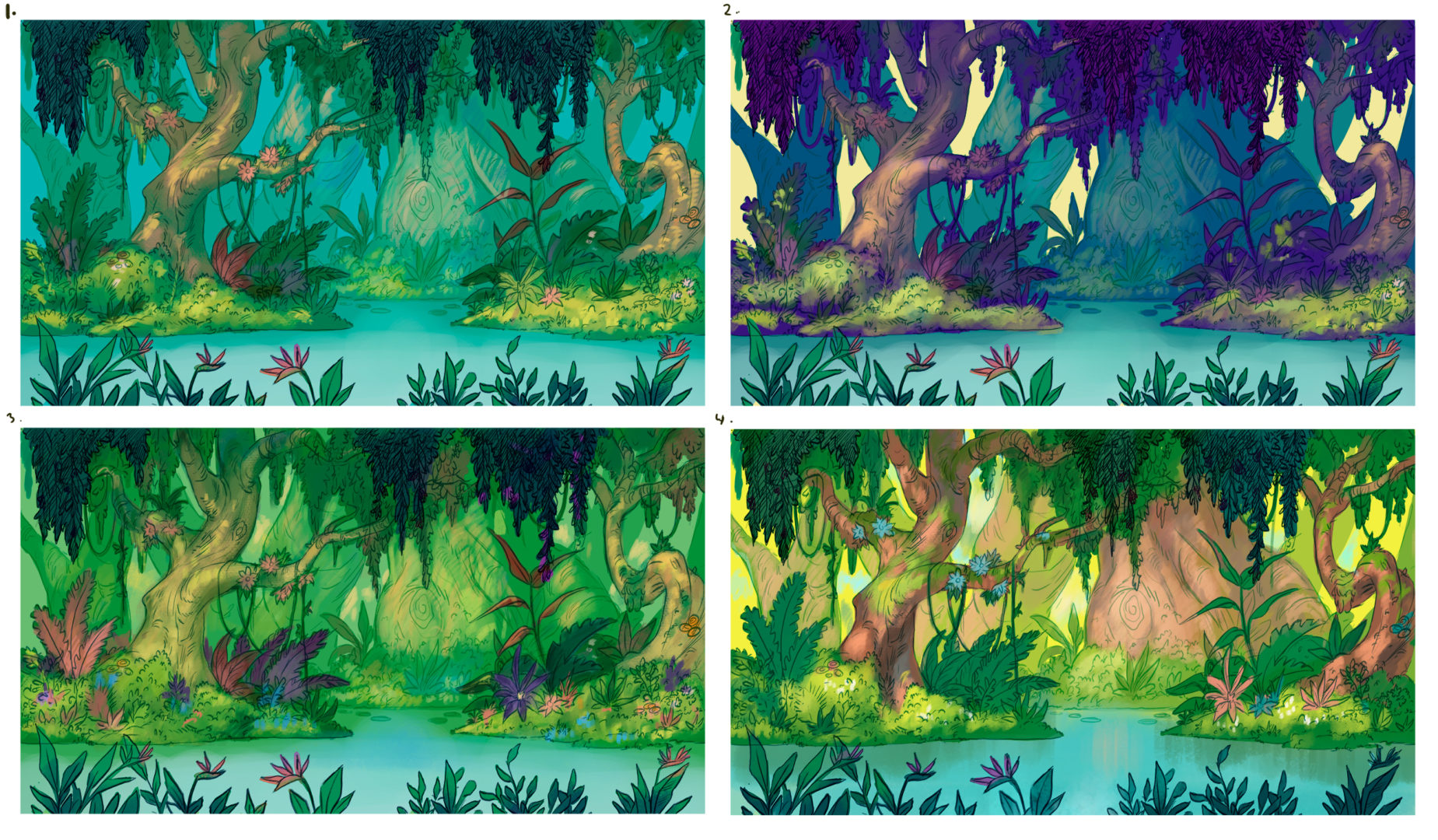 Where the Money Trees Grow

The biggest mystery in relation to the Ark myth and the history of the Kingdom is the Money Forest in the newfound continent. While the Money Trees (the trees that grow the leaves used for commerce in the Kingdom) are grown only in the royal capital, and the secret to their cultivation and growth is heavily guarded, it appears that in the colony there is a forest where these trees grow completely naturally without any need for cultivation. Indeed, it would seem the colony is their domicile, and they were imported in the Kingdom Proper across the sea many years ago. 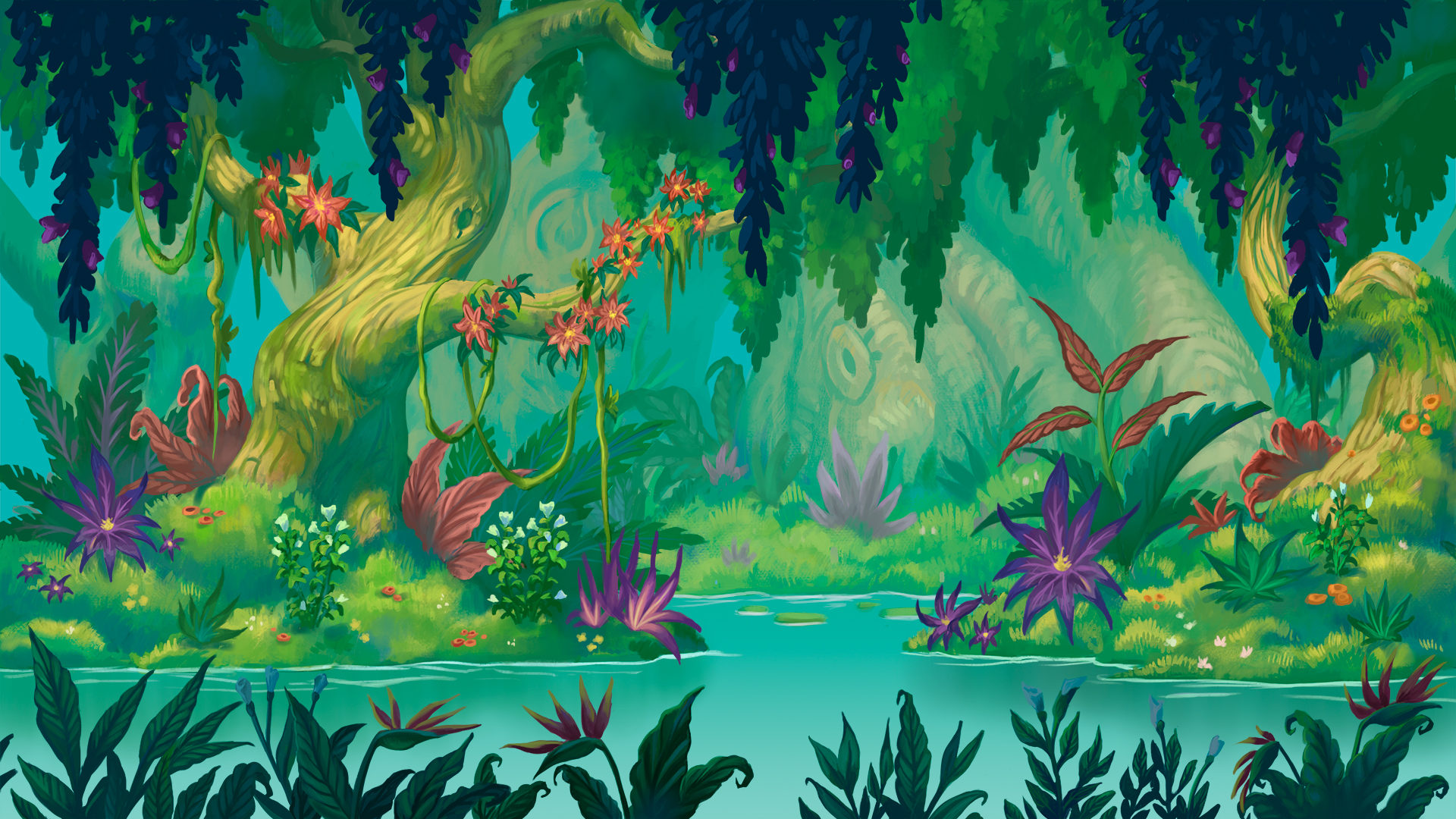 This strange discovery has changed the idea about the Kingdom – the dominant school of thought is that after the flood, the Kingdom ruled over both continents across the sea – the north as well as the south? And, as the theory goes, at some point, there was a dark age and the southern continent was cut off from the Kingdom, and all knowledge of the south was forgotten. When did this happen, and how, is still a hotly debated topic in arkology. 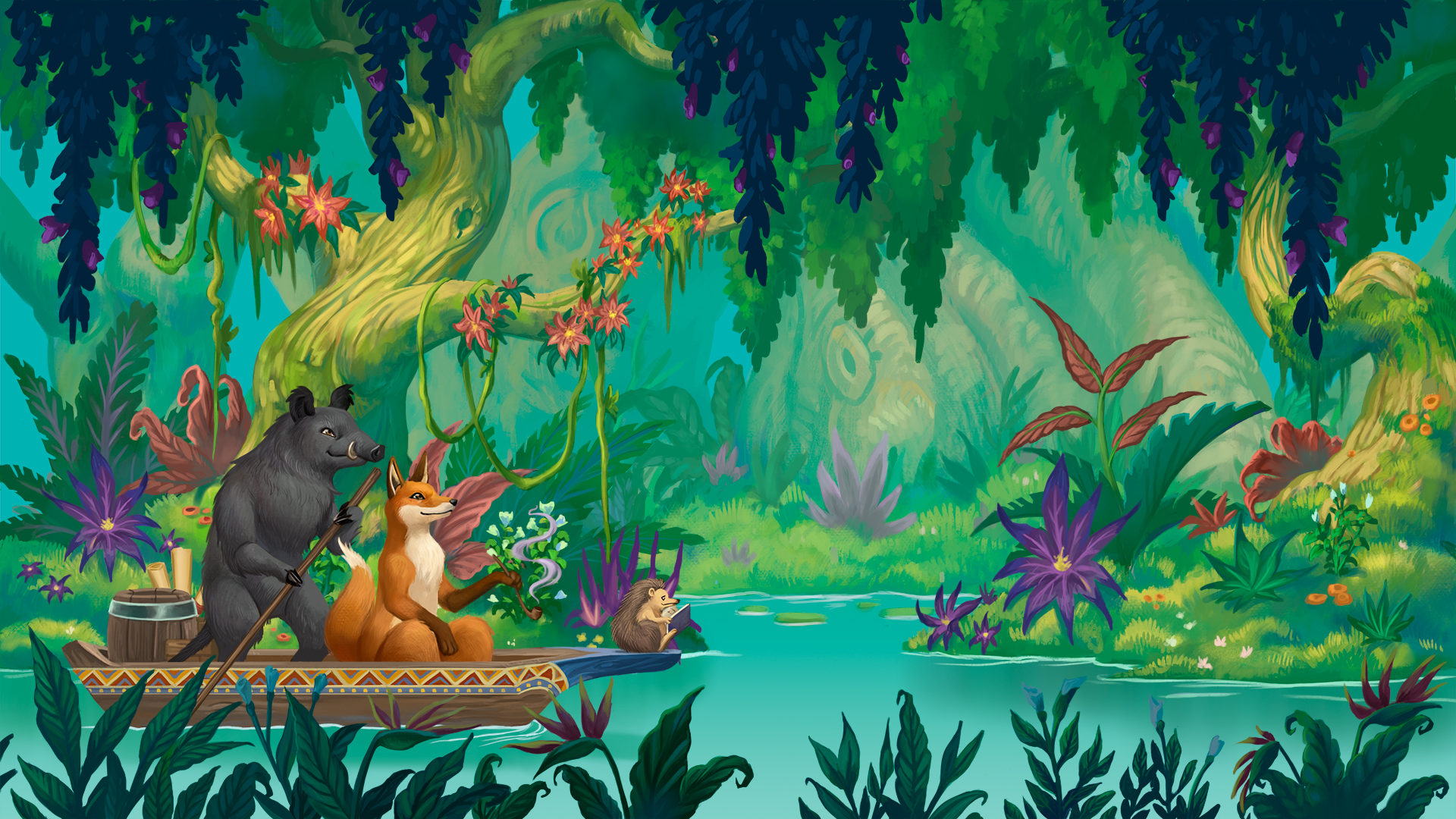 In any case, these mysteries, and many more, are what awaits Charles as he ventures to the colony in search for the elusive Ark. 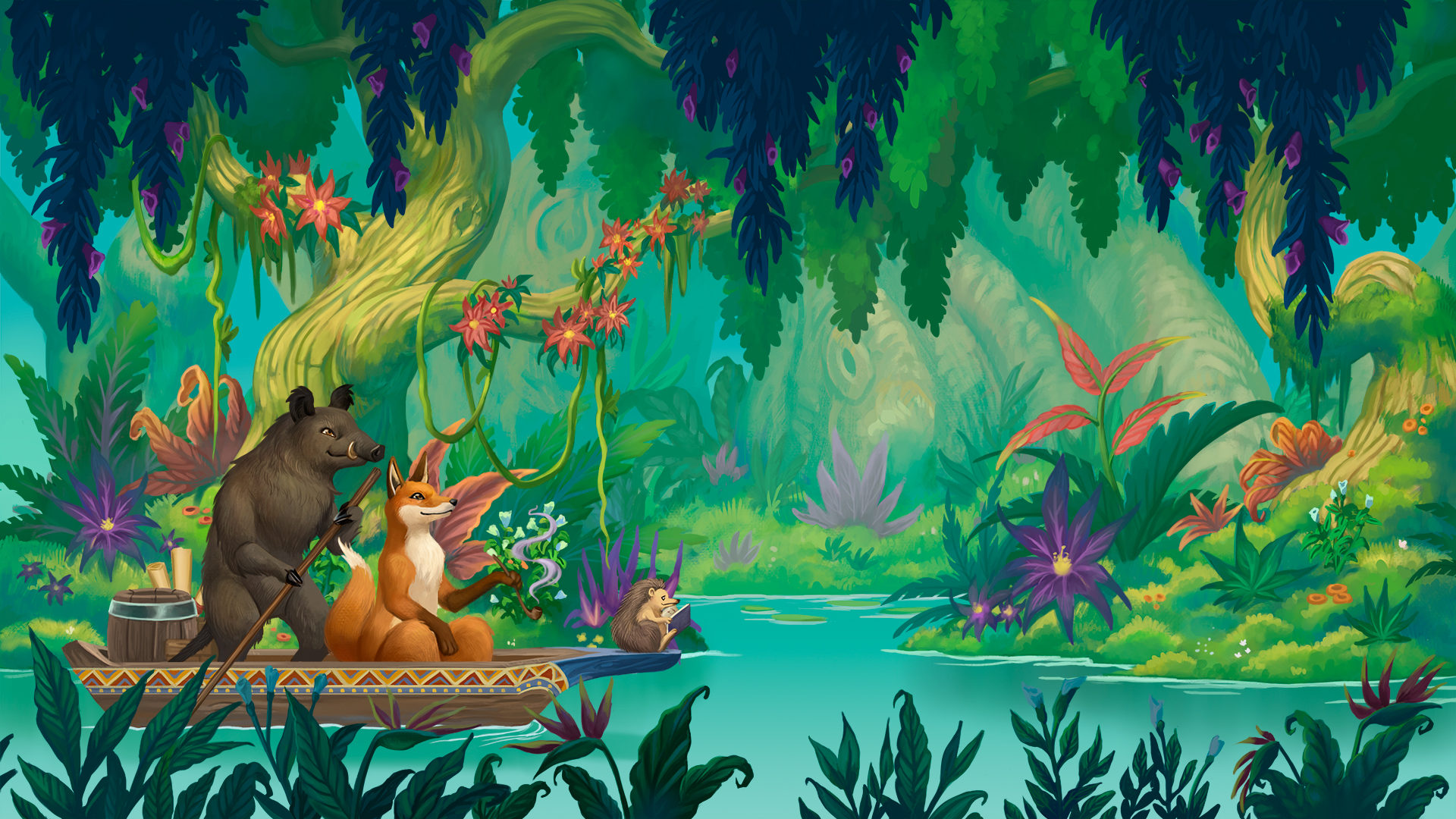 While you wait for the game to be finished so you yourself can find out the answers to many of these mysteries, if you’d care to know more about the world of the Animal Kingdom, be sure to follow us on Facebook or Twitter or even talk to us developers via our official Discord.