Post feature RSS From the past to the present: D E E X I T

Fist entrance of our Devblog, where we explain how the demo of D E E X I T have evolved since we started work full time on it! This are the points we develop at the Devblog: - Improving character and camera handling (and control); - Visual rework and polishing, specially for post-processing and lighting; - Visual feedback regarding game events and game environment; - Making the environment more dynamic, more alive; 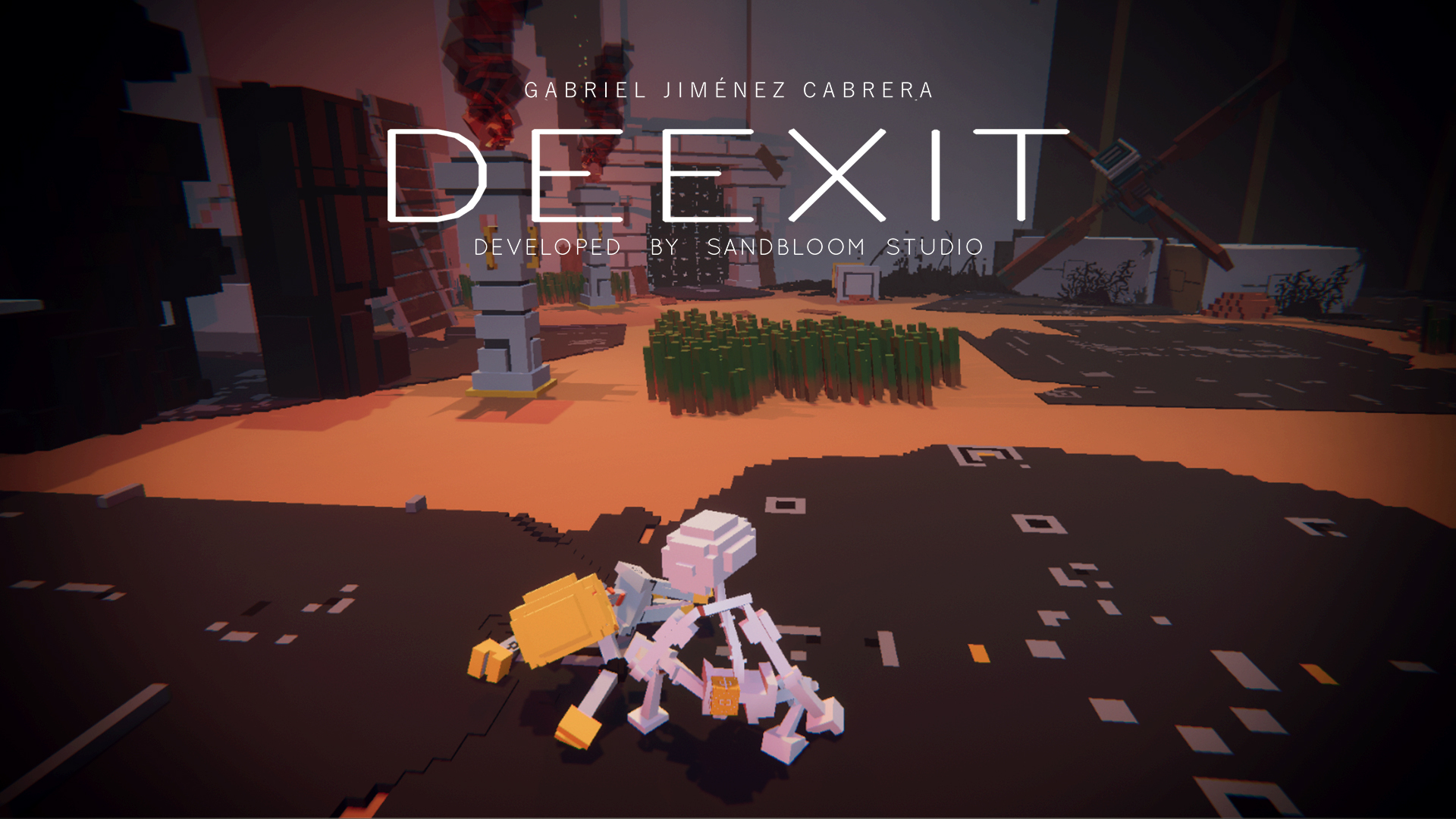 Welcome to the first REAL post on our Devblog about D E E X I T ‘s development. For a while now we’ve been wanting to show you our advances and setbacks on the journey to create a game like this one.

But let us start from the beginning. When we picked up the technical demo for D E E X I T , we saw a lot of potential in it, but we also knew there was much work to do. Our main focus was to obtain a solid, coherent and consistent demo, since we knew (from external and internal feedback) there were still some issues in these areas. To say it plainly: the demo, although being attractive in many ways, was still erratic (clunky in its control, inconsistent in its level design) and lacked polish.

So we decided to establish a few deadlines and short-term goals that would help improve the feel of the game in the most direct way possible. This meant:

Player and camera controls were really clunky and hard to use in the first iteration of the demo. It took the player out from the immersion of the game and it had to be addressed as soon as possible.

We knew that, to get the result we were looking for, we had to strip what we had down to the bare minimum and create something new, both in code and animator. We improved transitions between animations for them to be smoother. We also worked on movement and interaction with world objects so that player input would be optimal and satisfactory, adapting to the environment in a more organic way.

Cameras were actually a strong suit of the first technical demo. Cameras were there to give strength and emotion at the right moments and to show what needed to be shown in a meaningful, cinematic way. The main issue was with the free camera and the way it handled.

We had to work on lot of points on this camera in order to give the player a system that was both responsive to the game world (it had to not get caught within walls, always transition from one type to another in a good way) and that felt good to the player when looking around. 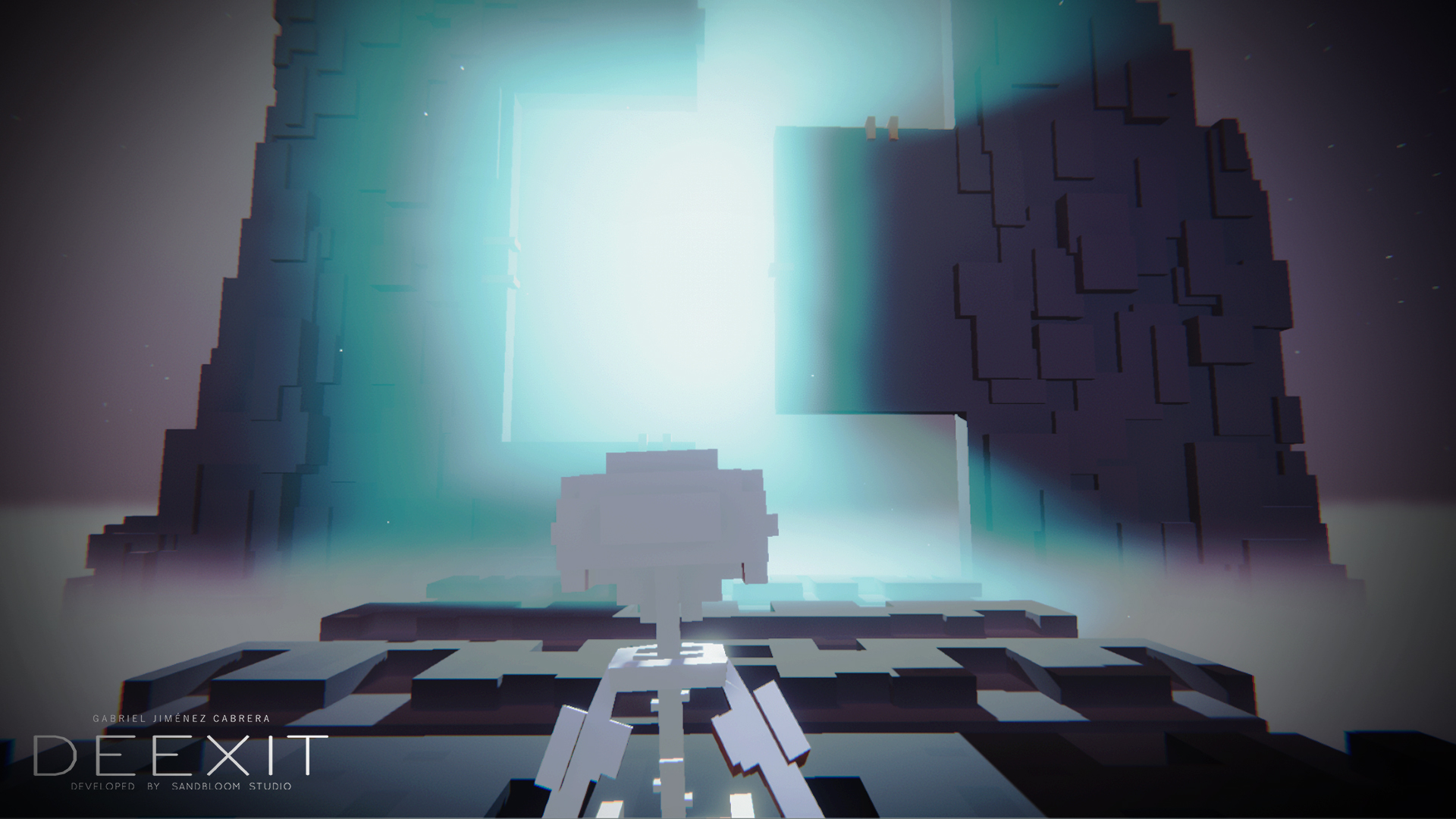 The problem with the lighting is that is was quite flat when we picked up the demo. It was used more in a “functional” manner instead of in a way of conveying emotion and artistic meaning. Where we are now, the light is thought to move the player, to make them feel what type of environment they are in, be it a hostile or calming one.

We knew that we wanted (and possibly needed) volumetric lighting in the demo. We wanted a way to give a realistic effect, in order to heighten the minimalistic meshes and modelling. We started by using Unity’s HD Render Pipeline, a system of calculating light for high-end pc and console, and the results were truly positive. Unfortunately, due to the fact that HDRP was still in a preview phase and some technical issues connected to this, the project did not work as we needed it to so we went back to the built-in render pipeline. Though some tweaks and experimentation were needed, we were able to get very good results as well. Also, the project is stable and running at more than 20 fps on all our work computers, which is nice.

Post processing was probably what needed more work in the original demo (visually speaking). Like lighting, what was already there was mostly functional and generic. Introducing subtle and delicate elements that worked in unison with lighting (and the rest of the art already present in the demo), we created an atmosphere aimed to envelop and fascinate the players. The goal is for all these elements to convey a mood, an idea and a feeling on their own. We also added local (and bolder) post-processing effects, elements that changed the overall style and mood of the scene depending on where the player is. 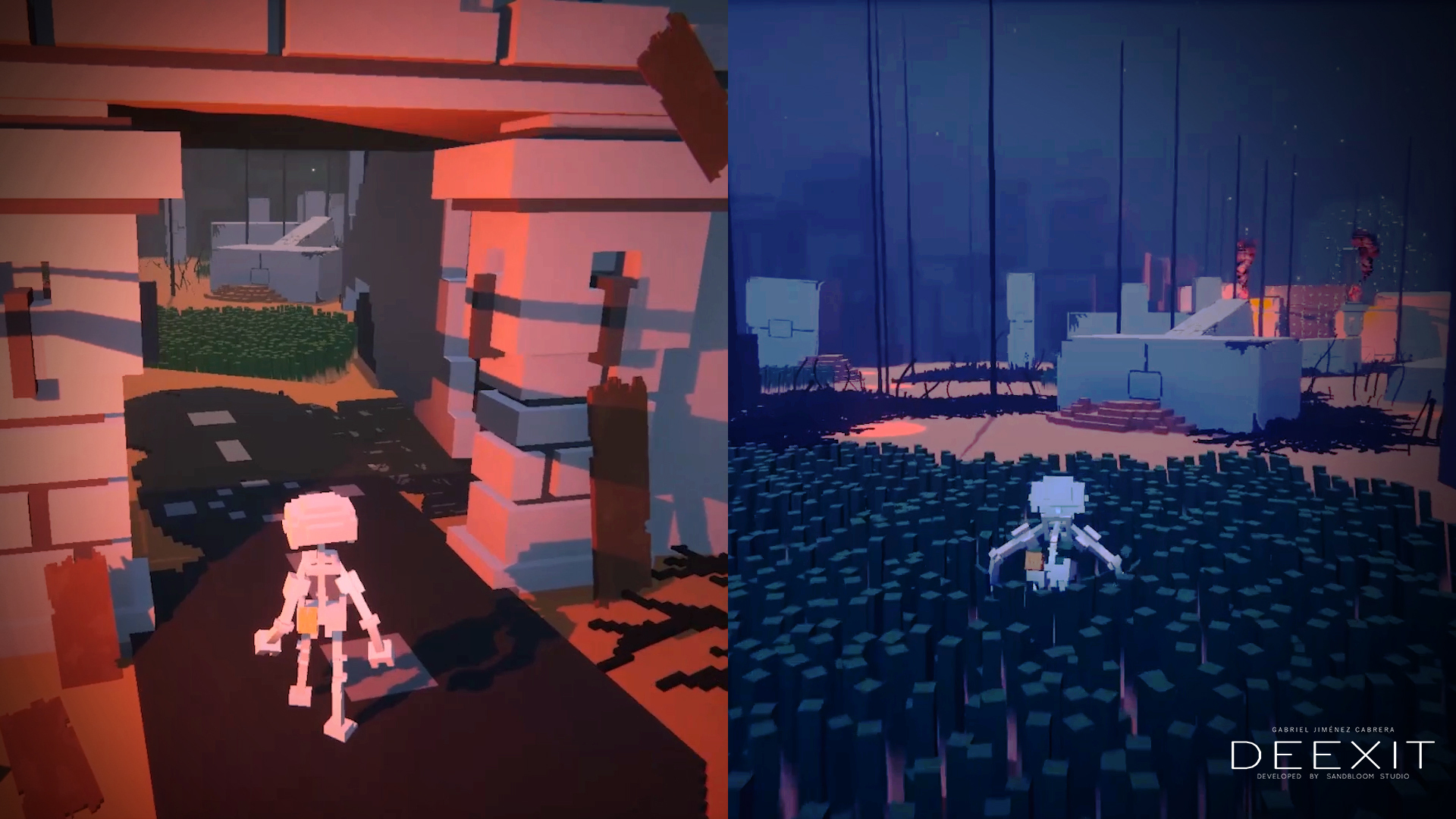 We can see here the lighting and post-processing changes we talked about before.

Visual feedback is key in a game. From enemies showing beforehand that they are about to attack, to special vfx that activate when you step in a dangerous zone to show the player that he should be careful. These elements not only augment the game visually but also make the game nicer to play, less frustrating. Without these elements, the player might fall or die without understanding truly why or how to avoid it the next time.

In order to improve this in our game we have included some new particle effects to highlight potentially dangerous or important elements. For example, we needed to call the attention on which objects could be destroyed or illuminated, which others could kill you and so on. In the new demo, it is easier to understand where to go, what to do and what to avoid.

We here can see the difference between a dangerous and menacing situation and a more calm one.

The voxel aesthetic of D E E X I T has been attractive visually from the start thanks to it’s clean and minimalistic shapes. The various environments are built in a way to tell stories of the world.

From the beginning we realized that there were a lot of good elements in the demo as it was but it could be better! For instance, it was not truly alive. There were a lot of static elements, no much variety and so on…

We started by introducing a variety of particle effects. For instance, we created grass that moved with the wind, animated elements that were once static or that you could barely see actually moved. We also added elements to make the world more complete (volumetric fog, fire and smoke) and interactive, filling it with color.

But there is still much to do!

Summing up, from the initial demo to now we established strong foundations for D E E X I T . We also did some initial dusting and polishing to give true potential to the game, both at a technical and visual level. We were able to reach our main objective, which was to give a sense of coherence to the game.

We are contemplating three main goals at short-term: 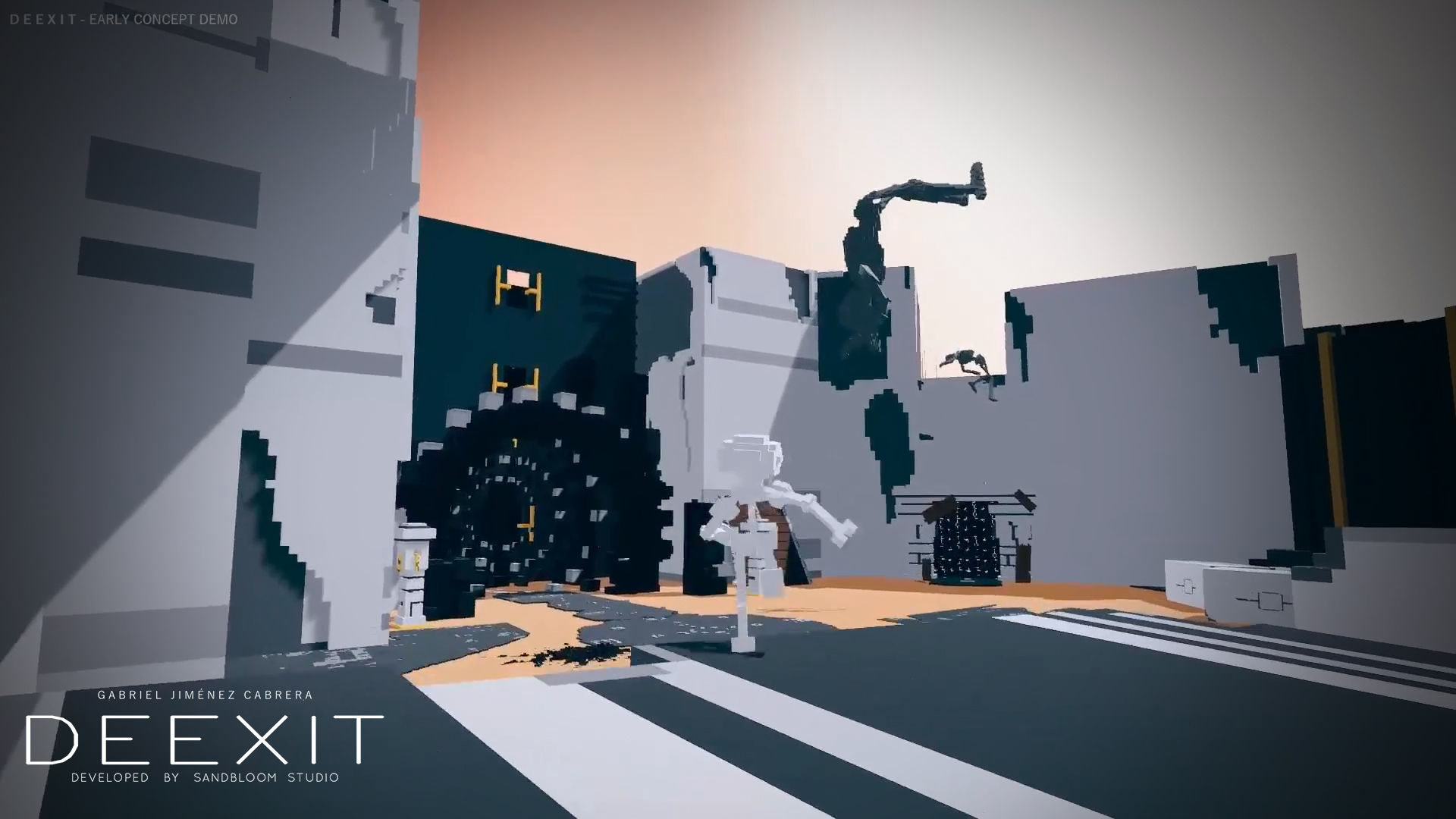 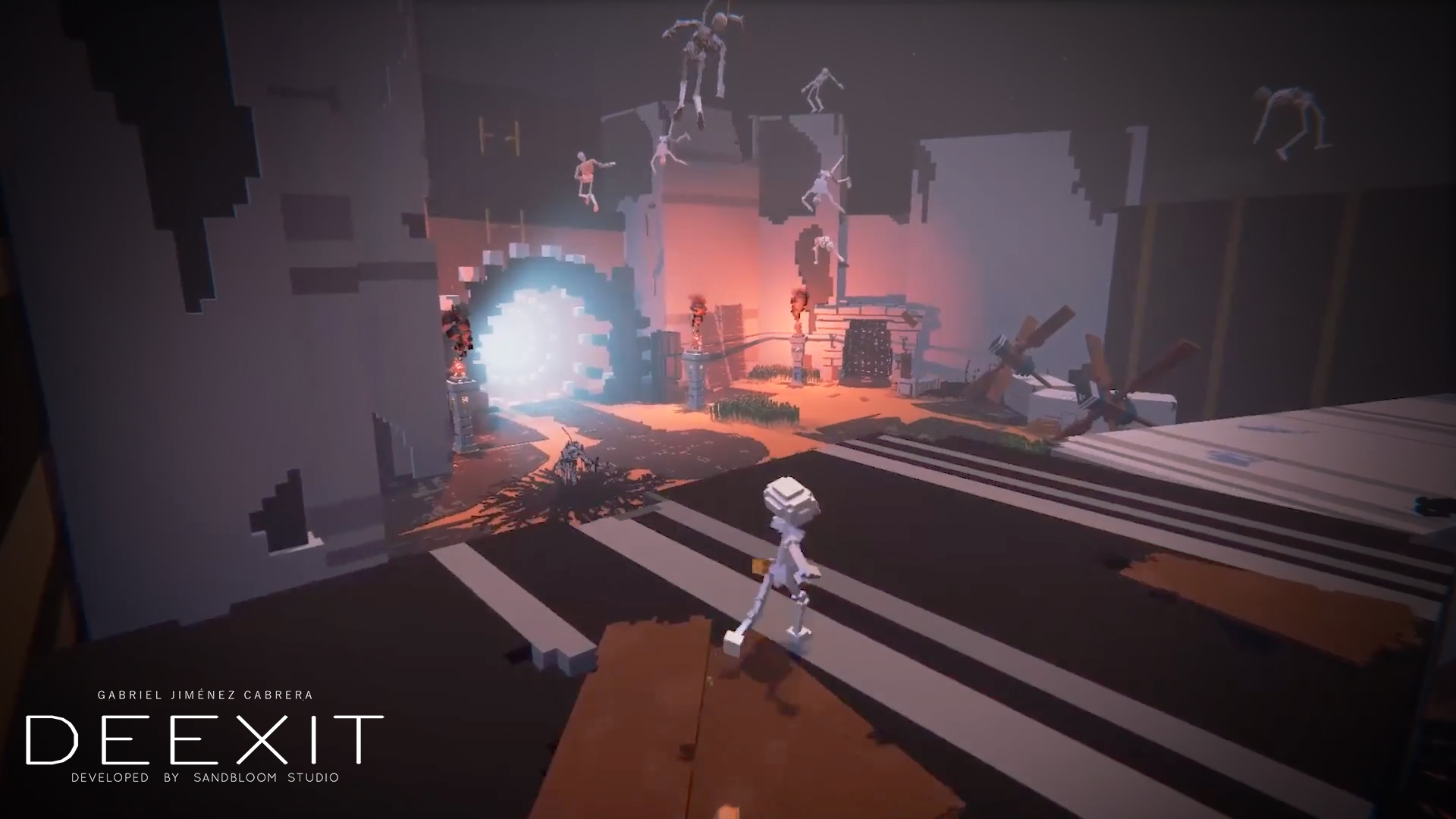 Remember that you can always contact us through our Twitter, chat with us on our Discord, be always updated on our development progress through our newsletter.

Thank you very much! We are pouring a lot of love and effort to make it look as amazing as possible!