Introduction to Control strategy in Rise of Titans, using the Egyptian started deck, focused on this type of strategy. 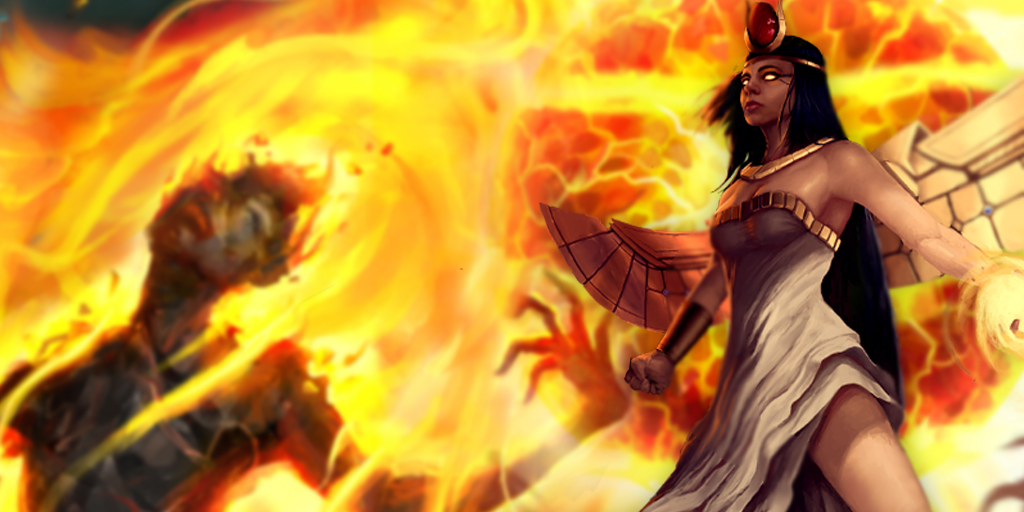 Egyptian starter deck is centered in a control strategy. This deck is built to win during turn 8-10 or more. The longer the game is, the more effective this deck becomes and the chances of winning increases. To make it work, we’ll have to endure the first and middle turns, but if we overcome them, we will win.

The main goal of this deck is combining attacking the hero with cleaning the battlefield. Is important to focus on attacking enemy’s creatures and protecting your own hero until turn 6-7, and from then on, focus on the enemy’s hero.

Spending cards to attack directly to the enemy’s hero seems like a good idea at first, but our hero, Isis, has low life and low resources (most of her cards have high cost), it’s better to endure and wait for the enemy to have run out of cards to directly attack their hero. It will be much more efficient.

Furious Warhog. It works as a spark, to finish enemy’s creatures or do damage to the hero.

Chillstone. Elemental, works really well with the Egyptian deck and control strategy. Pierce ability allows it to clean efficiently the battlefield if you know how to place it. It is also a good unit to place at the city, since it has Fade and each turn it loses helth, but it would be regained in the city. Very important to haveElementalist with this race.

Spearbreaker. Another elemental. A tank 1/5 with provoke. Perfect to protect our hero. Goblin War Drumand Elementalist can expand its life and power.

Punish. For only 2 of mana, this spell does 2 damage in area and steals a card. The more cards in your hand, the better, since it brings much more possibilities to the battlefield. Its damage can be increased with Isis’ Orb, reaching 5 damage.

Elementalist. The pillar of an elemental deck. It avoids fading and gives +1/+1. Protecting it is important.

Goblin War Drum. Very mobile. It has low attack but with range. For only 3 of mana it can buff near creatures with +1 attack.

Demolish. During a play, players tend to position their heroes on mountains to protect them. This is the moment to use demolish, especially during late game. Isis’ ability increases damage points, this spell can be a good way to finish a weak hero or creature trying to protect themselves. It can be also used as a protection in your battlefield, to avoid that your enemy invokes Volcanic rebirth near your hero.

Horus’ Herald. Has really good stats for its mana cost. A 3/3/3 with flight.

Hungering Serpopard. Can clean creatures at a distance of 1-3 tiles.

Forest protector. Has good stats for its mana cost. Heals 2 life points to nearby allies. Super useful for midgame to restore health to your units and hero.

Volcanic rebirth. Creates a volcano that reduces defense and a magma elemental with pierce. Thanks to the Elementalist, the magma elemental can endure more turns and increase its attack to 8.

Sunfire. A must for every spell deck. 5 damage points for 4 mana in area.

Gust. Its power can be increased with Isis’ Orb, allowing it to clean most of the battlefield.