It wasn't easy to come up with a compelling single-player campaign for a strategy game about ants. We really want the Empires of the Undergrowth campaign to be something special and we went through a lot of ideas before finally settling. This article gives a breakdown of our thought process and also a hint of what you can expect from the Empires of the Undergrowth campaign.

From very early on in our plans for Empires of the Undergrowth, we had agreed that we wanted to produce a single player story campaign as the main part of the game. This is in line with a lot of old RTS games and a very important feature for us. Especially as we had decided that multiplayer modes would be too much additional work to code and balance. It is not something we are confident to take on currently, especially in a short time frame. We do want to add skirmish modes too for challenge maps and custom play settings but at its heart, we felt like this game needed a good story campaign to be complete. Before we could plan out a campaign however, we needed to know some facts about our ants and the world they lived in.

We knew that to create a rich strategy game experience, with players having the option of various play styles, we needed to include good range of unit types. By this point in the process we had already decided that we wanted to base game units around real species of ant and were already getting excited about which ones we could include.

You can see some of the species we will feature here:
Imgur.com
Imgur.com

However, even in species which exhibit a high degree of biological polymorphism (where colonies have big soldiers and multiple worker caste), unit choices would have still been relatively limited and battles would have been less about tactics and more about numbers and sheer strength. Despite this fact being for the most part true in nature, it would quickly get tiresome in an RTS and so we needed a way to allow the player to diversify their colonies. Basically we needed to have different species of ants within the same colony. Now there are actually some species in which this occurs naturally, slave maker ants will conduct raids on other colonies and steal larvae to raise as their own. We looked into basing the game around a type of slave maker ant that would collect larvae throughout the game but the idea started to get complicated. Trying to balance accuracy in nature with enjoyable gameplay was causing a lot of headaches and in the end we concluded that we were going to have to bend the rules a bit.

Seen as we decided that we weren’t going to be able to accurately represent a real species of slave maker ant whilst producing the game that we wanted, we came up with our own: The Formica ereptor ant. Actually, by inventing our own ant, we gained the freedom to do what we wanted with it, whilst keeping all of the other species in the game as true to nature as possible; having a very clear line between fact and fiction. The ereptor ant is able to harvest the DNA of its vanquished foes and integrate it into its own colony. The idea being that the queen can produce larvae that grow into ants that exhibit the traits of the assimilated species.

So we had our DNA-harvisting ants, but now we needed a way to include all of our favourite species in the campaign. The problem is that ants live almost everywhere and interesting species are spread all over the world. We cycled through a number of campaign possibilities, the first was a worldwide epidemic where ereptor ants would spread from continent to continent, causing havoc with eco systems or possibly even taking over the world. This idea spawned lots of funny story arcs within the team but we never really hit on anything that seemed to work. We mulled over the possibility of having the ants or ant queens harbour some sort of high level intelligence where they were actively planning to take over humanity, but things were getting a bit too sci-fi and we wanted to concentrate more on nature. Another possibility was for them just displace all other ant species, travelling over the world because of their invasive, and nomadic traits. The ants would essentially be innocent in their quest, and the story of how they were effecting plant and animal life over the world would be told through news reports. Again, it was quite far-fetched, and no one was particularly satisfied that we had hit on a winning idea.

We went back to the drawing board and looked at why we wanted to make a video game about ants in the first place. The answer was really quite simple, we are all fans of nature documentaries, we had all been fascinated by ants and, being gamers we had identified their potential for a real time strategy game. We realise we aren't the only ones too *See “Sim Ant”, “Empire of the Ants”, “Formicarium” etc. Anyway, we thought, why not base the game around a TV documentary? After all, games are based on TV shows films all the time. Seen as TV documentaries had been our inspiration, it seemed to make perfect sense.

Something we had been worried about from the start was being able to have the player empathise with the ants, without them being intelligent. The documentary narrator gave the perfect solution. A good narrator can make any creature seem cute, friendly, dangerous, or evil. When the Corral colony is destroyed at the end of BBC’s “Empire of the Desert Ants”, I was really quite upset. But it was the narrator's fault, not the fact that ants were being slaughtered. (I just found out that the narrator is Andy Serkis, the actor who plays Gollum in Lord of the Rings… Though he does different voice fortunately)

Here is the raid:
Youtube.com

Ok so we had a great way of telling a story, but we were still no closer to the story itself. We needed to join the idea of assimilating all sorts of different species with a documentary film crew making a show. The problem was solved with yet another side step from reality. We decided to invent our own island, full of all the ants we wanted.

If we wanted the ants to meet all the different species in geographically accurate locations, we either needed our ereptor ants to travel the world, which would be very difficult for a film crew to follow, or involve multiple colonies in which case we would lose the connection between the player and their colony. Instead it made more sense for the ants to come to us. Instead of concentrating on where ereptor ants had come from and what effect they were having on the world, we could examine them in their natural habitat, on “ant island”, with all the other ants (we still need a name for it). We decided that it wasn’t important to have a reason why the ants are all here, we just assume they are, and they have been here for a long time. The ereptor ants are part of the eco system of this island and the documentary film crew have come to study them for no reason other than to make a show about ants. Perfect; now we are in real documentary territory.

With the lore of the universe set in place, we were able to finally sketch out a campaign.

So in this single player campaign you will take control of a Formica ereptor colony, these nomadic ants have just landed on a beach and all you know is that you must collect food and move on quickly. You learn that your queen comes from a much larger super-colony of ereptor ants, far away on the other side of the island, in a place we refer to as the “fertile pinnacle” and that she travelled to the beach by air on her nuptial flight. 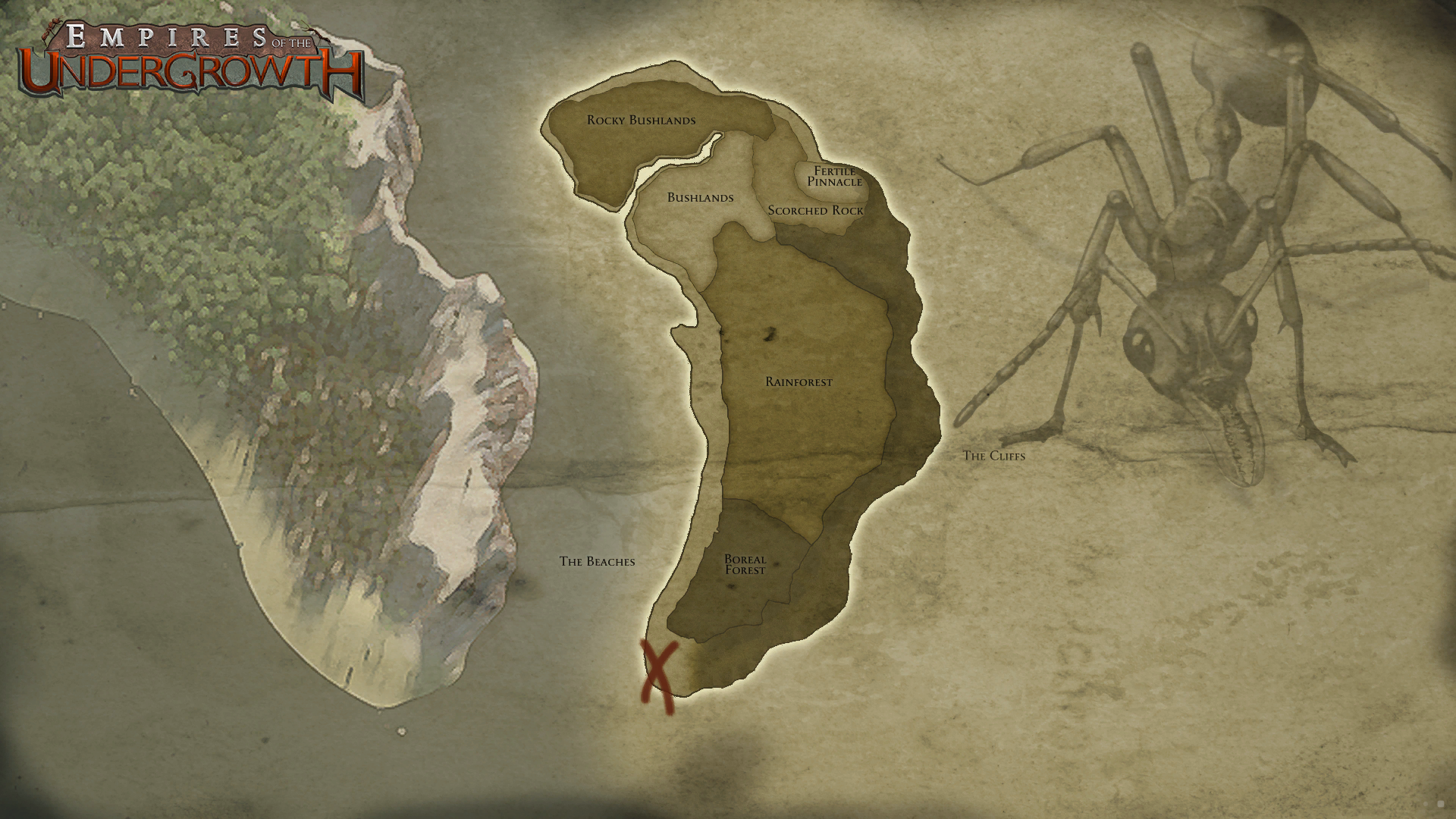 The narrator will explain that your primary goal is to travel back to your kin and re-join the super colony far away. Ereptor ant colonies are only strong when they have a diverse range of other ant species integrated into their colony, unfortunately over time, the genetic material harvested by the queens that allow them to produce multiple species runs out and of course queens eventually die. The purpose of flying so far from home, and travelling back over the land is to collect new genetic material and bring it back to the supercolony. Without it, your birth colony will grow weak and be displaced by neighbouring, rival ereptor ants. It’s a very important mission, and your kin are counting on you. Although you are fairly weak to begin with, being able to only produce ereptor ants, in the process of collecting the new genetic material from other species, you also gain the ability to produce those species, making your colony much stronger.

It’s a fairly simple quest, though the reasoning behind it may take the narrator a few missions to fully explain. We don’t want to bombard the player with too many of our made-up ant facts all at once.

Time is also of the essence on this quest, as your kin are not the only ereptor ants fighting for dominance of the fertile pinnacle. You need to get home as soon as possible. In between levels, your colony travels, it moves as far as possible each time before setting up a new temporary home. Over the course of each leg of the journey, your colony loses ants until only a handful remain. This is the reason that we give for beginning each level with only a small number of ants. It is the new genetic material that you carry on from level to level, not your army.

The levels in which you play as the Formica ereptor ants will usually involve raiding a rival colony and assimilating them. There will be different challenges and play styles depending on the type of ants that you are up against, and on top of that, other dangers from parasites and extreme weather will need to be faced.

You will also learn of your nemesis; we call them “the counterpart colony”. The counterpart is another formica Ereptor colony that you will encounter early on in the game. They are on the same quest as you and always seem to be at about the same strength. They have no special link to you other than being of the same species, but you are always aware of their progress.

In around 40-50% of the missions you won’t actually play as your Formica ereptor colony. We decided that for each new species that you encounter, you should play a game as that species first, to learn about them and how their abilities work. These missions will be survival missions; in the end, the colony you play as will be destroyed by the counterpart colony. So you get to play against the counterpart colony regularly, and see how they grow and what abilities they gain, but without your Formica ereptor colony directly fighting them.

Of course the counterpart colony has another role to play, but I don’t want to give everything away.

So that’s a basic overview of our campaign plans. It should give you a good feel for what to expect from Empires of the Undergrowth. 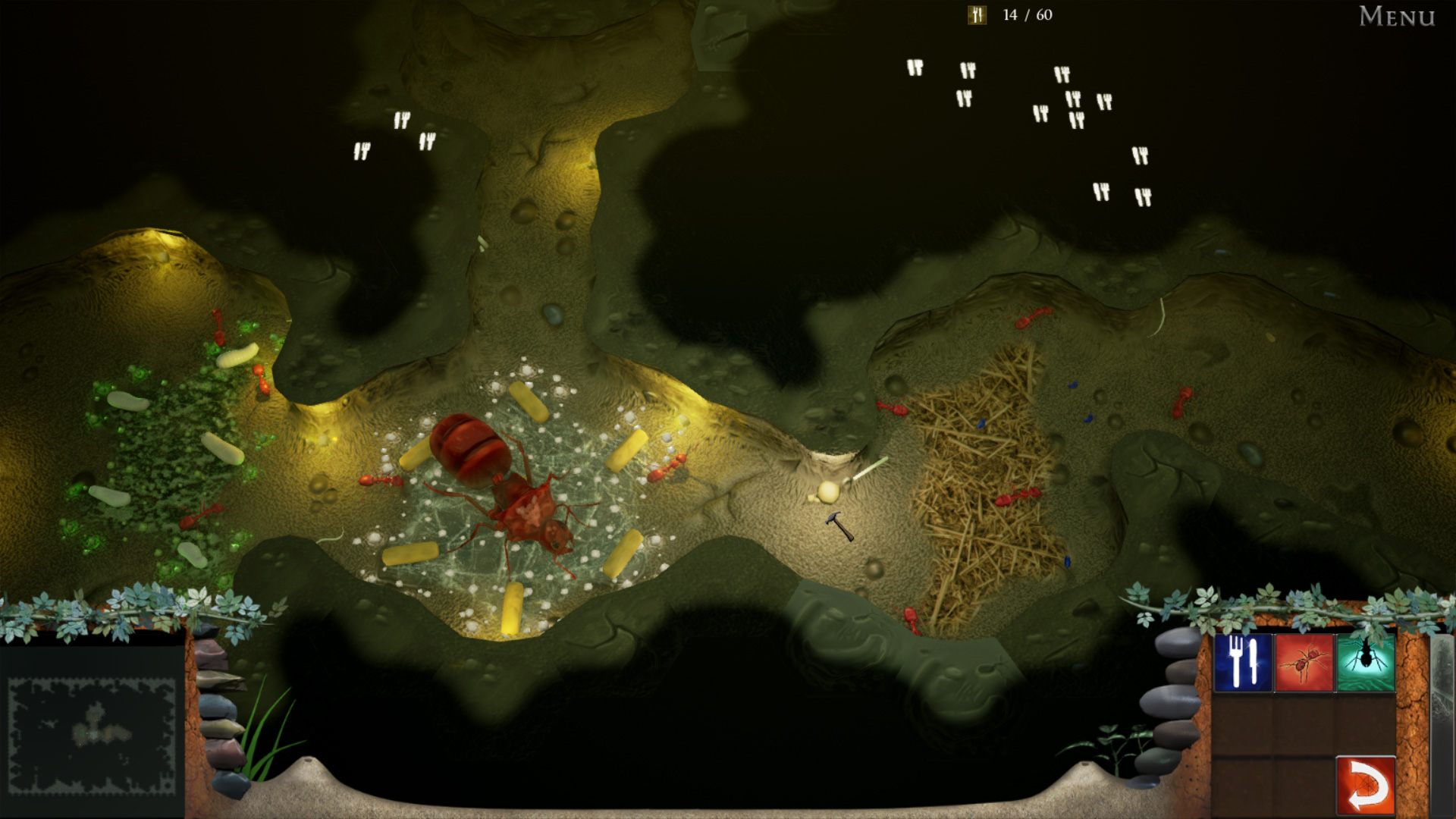