Here we show you some of the lovely main characters, and tell you what's their role in the game.

Let me show you the main characters and talk a bit about them! Note that they do not all appear in the soon-to-be-released Demo... they will be introduced in the full game in the later chapiters. 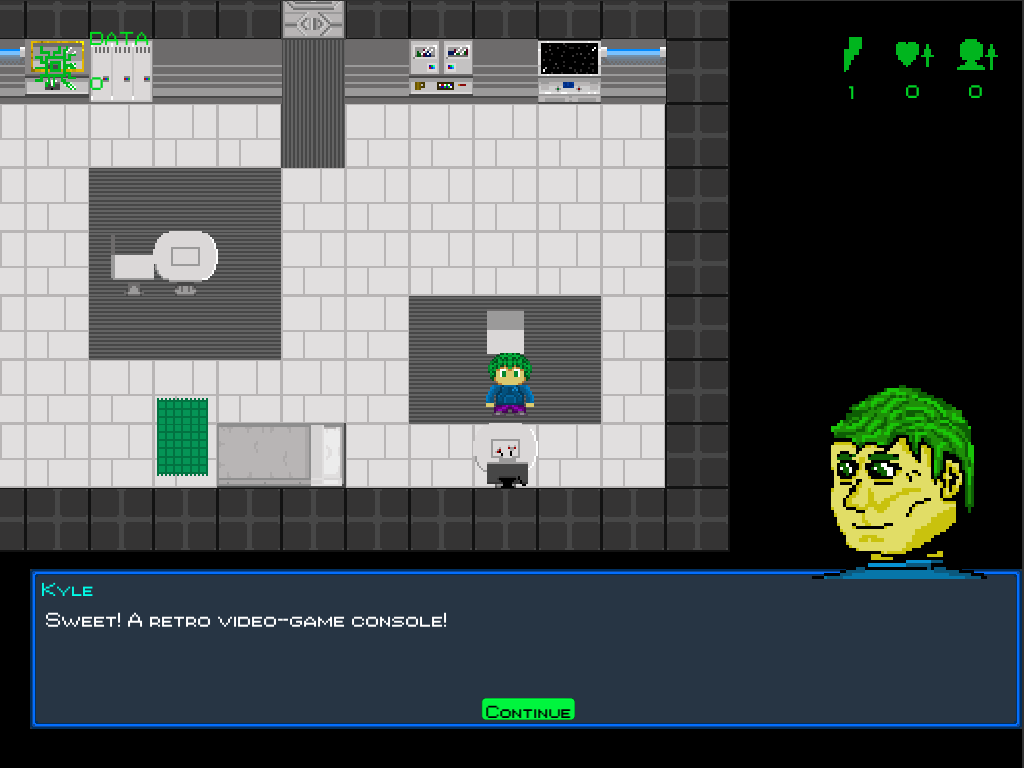 That's you! I mean... the character you play... the main character, that is. He was young when he participated in the Alien invaders war, and he was one of the best pilot! He is an independent guy and don't want to be emotionally attached to anyone or anything, and some peoples have a probleme with that. He still go visit Gary, his "old man", just to be sure that he does not fall into depression, because he's the total opposite of Kyle. Kyle has green hairs... and it's not dyeing. Doctors says it's about a weird unknown gene he got, but it does'nt cause him any harm, so Kyle is pretty chill about it. 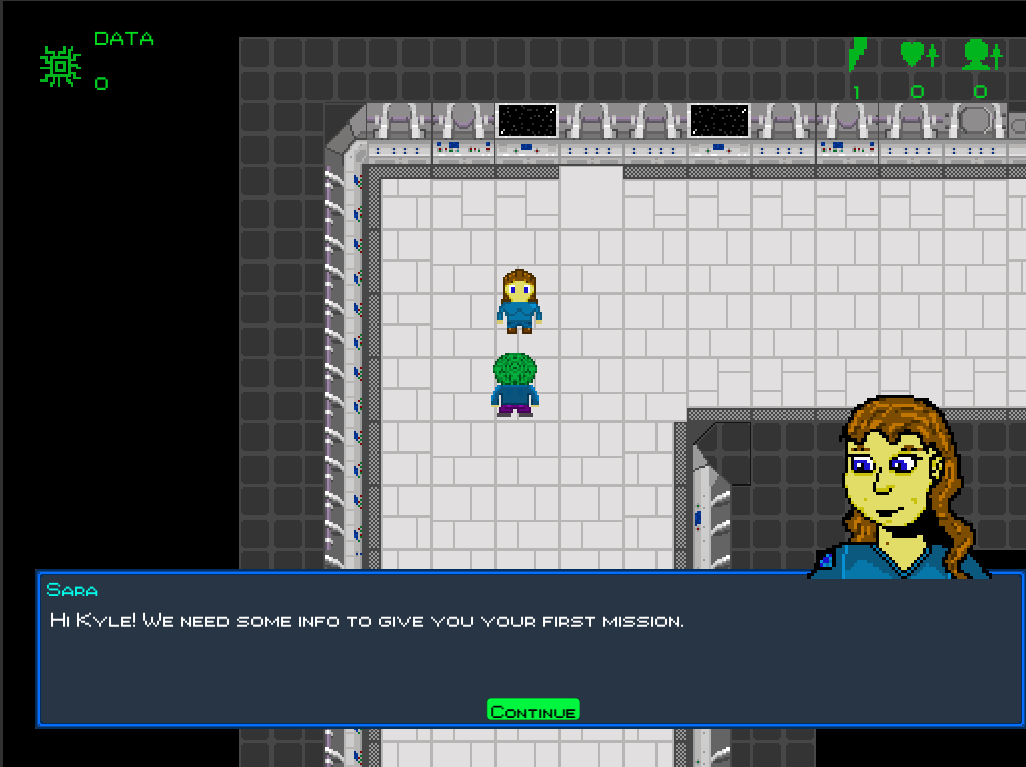 Sara is your boss. She found you on a flying test session, and hired you immediately. She started that Merc business and knows about everything in the field. She has great leadership and comunication skills and is a genius for analysing informations and how to find it! She is also cute and gentle but if you do something against her convictions or you do a bad job... you will not do it again, trust me! 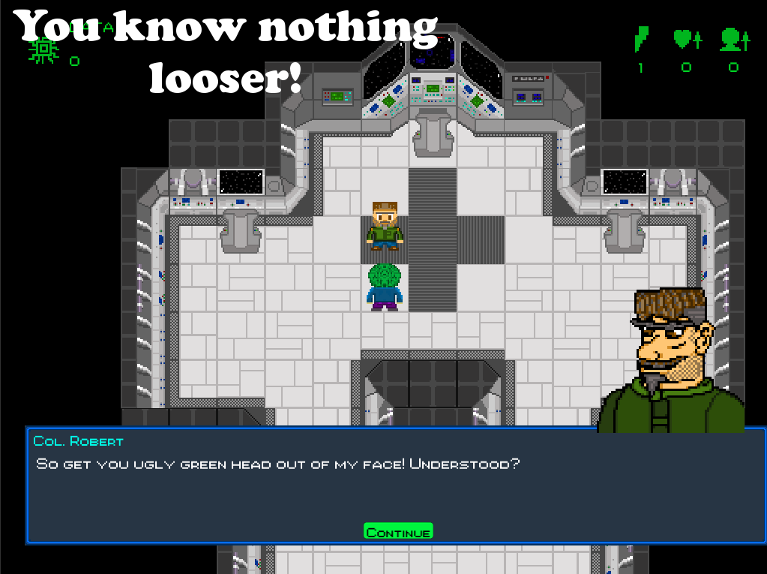 Col. Robert, yeah, him... He's an asshole. He treats everybody like shit, and is single since forever because no woman can tolerate his temper. But Sara keep him as an employee and he's the best at what he does. He's the best strategist to be found and a good pilot to! He doesn't join the fight as a starfighter pilot though... He's in charge of piloting and taking care of the HQShip. If you wan't to move to a far away destination you have to talk to him (sadly). 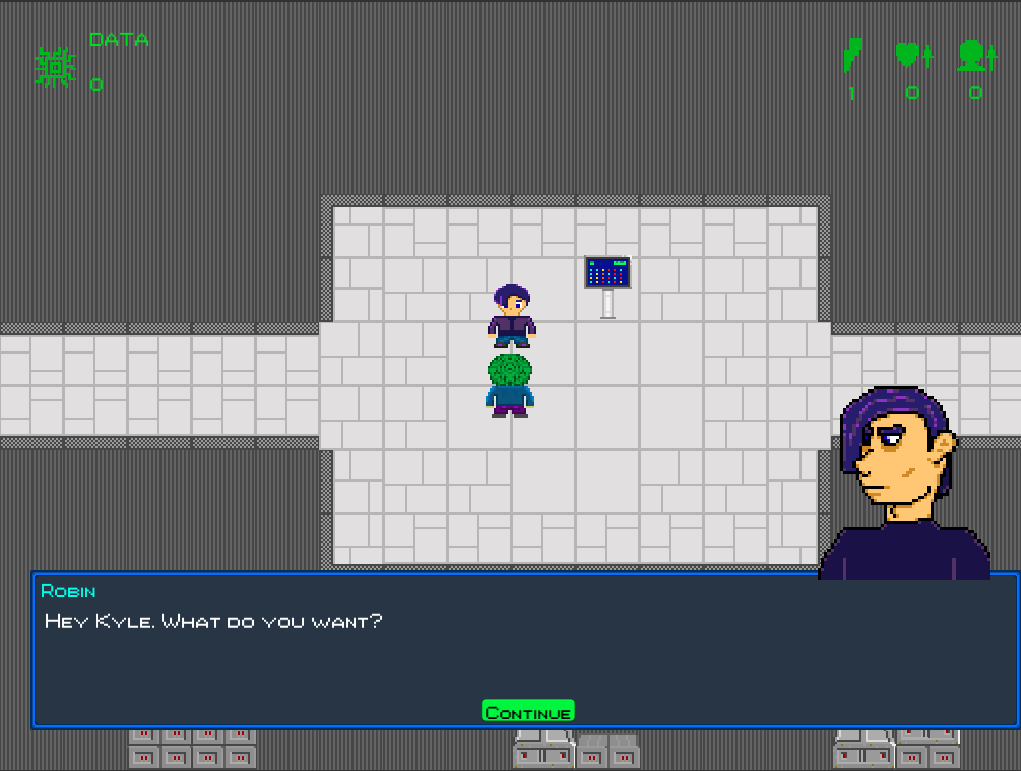 Robin is your team tech expert. He's young but is a genius at mechanics, hacking, electronics, and everything that includes technology. Robin's also sarcastic and has a dark sense of humour. He's a bit of a goth... but it's not just a phase... 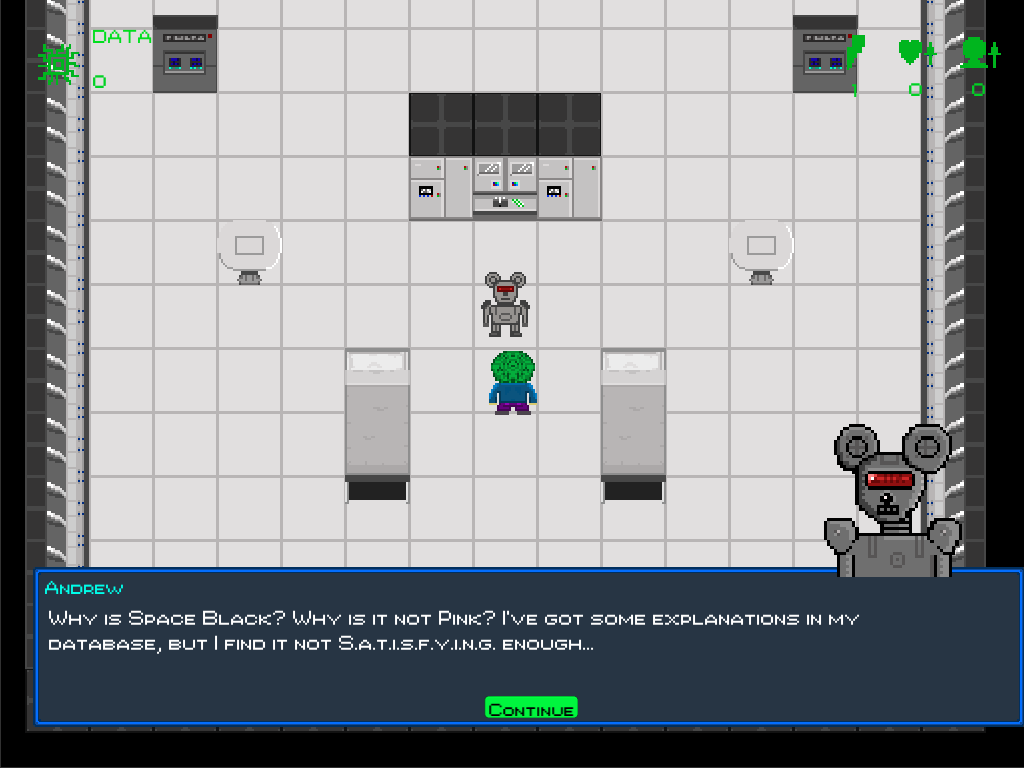 That metal thing with the cartoon-mouse ears is Andrew. He is the team Droid. He does all sort of tasks for the crew, like all medical needs and help Robin to take care of the Space Ships. He's also the ship AI and is directly connected to the ship. His personality is fine, except he's going through a philosophical/existential crisis. He's also obsessed with his past and is sure that the meaning of his "life" is hidden somewhere in his Database. 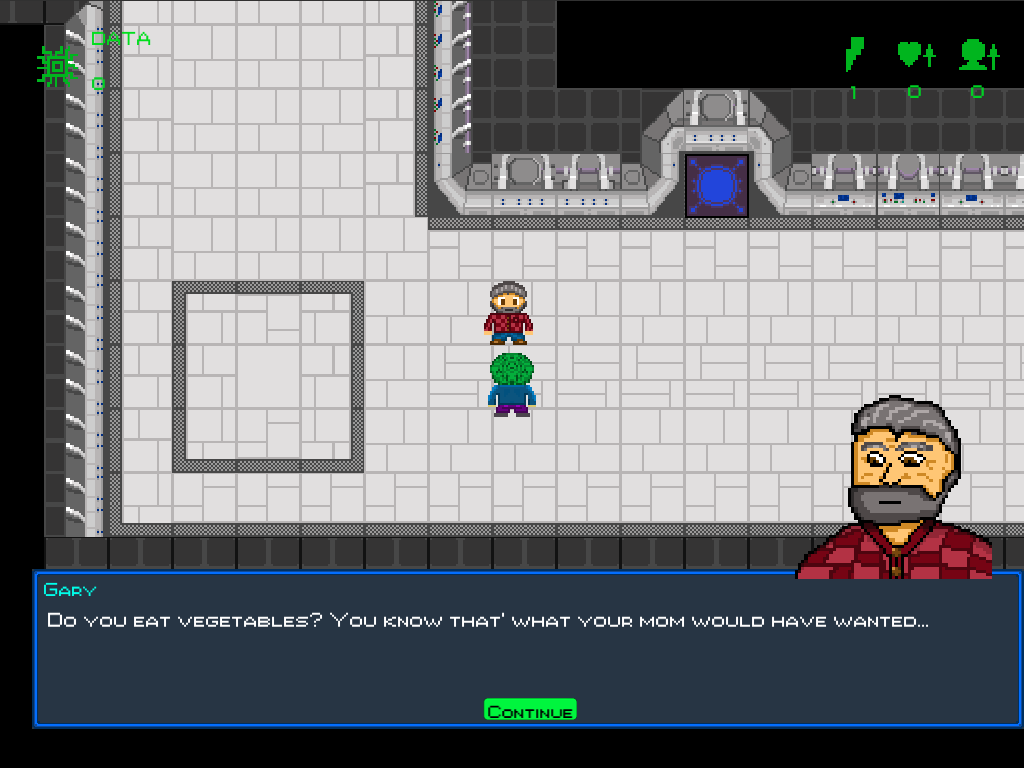 Gary is the only person still alive in Kyles' personnal life. It's his "old man" as he always call him. Gary has a little anxiety probleme and always care about Kyle. He's also stuck in the past and talk about Kyles deceased mother at every opportunity. 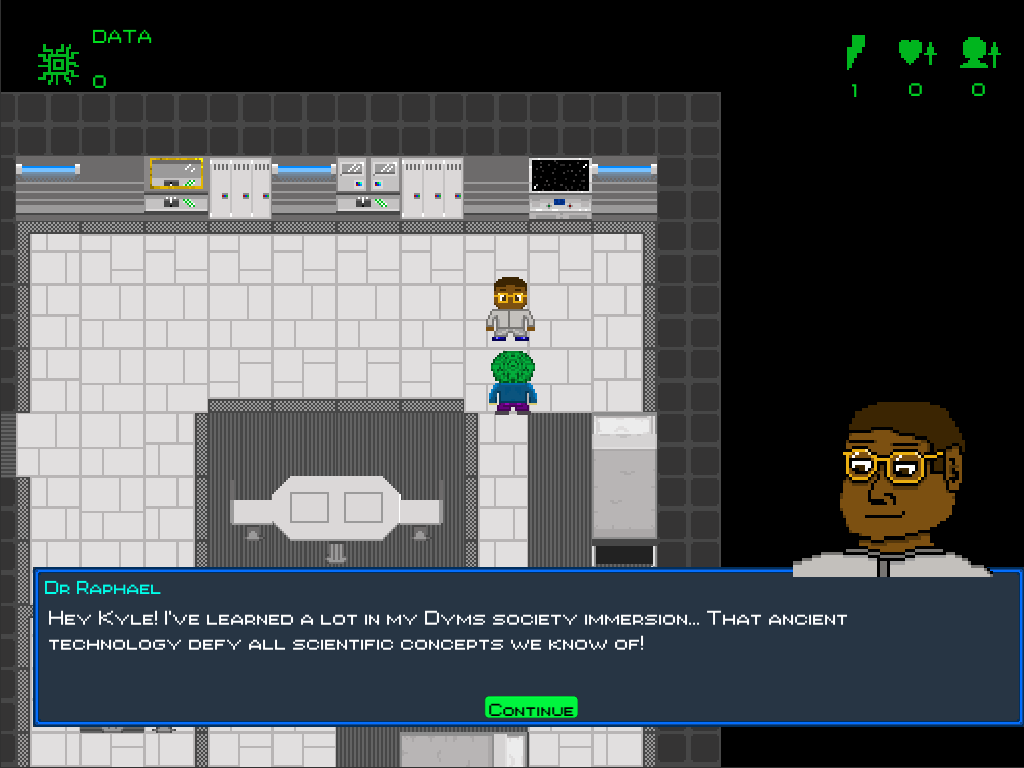 Dr Raphael is considered the smartest human being alive by all scientists. So he's the best candidate for studying the ancient Dym technology, and he's totally facinated by this, even if he doesn't really understand how it work. He already had used his knowledge to build devices into your ship mixing the Dyms technology and will be working on future assets. Truly a brilliant mind! 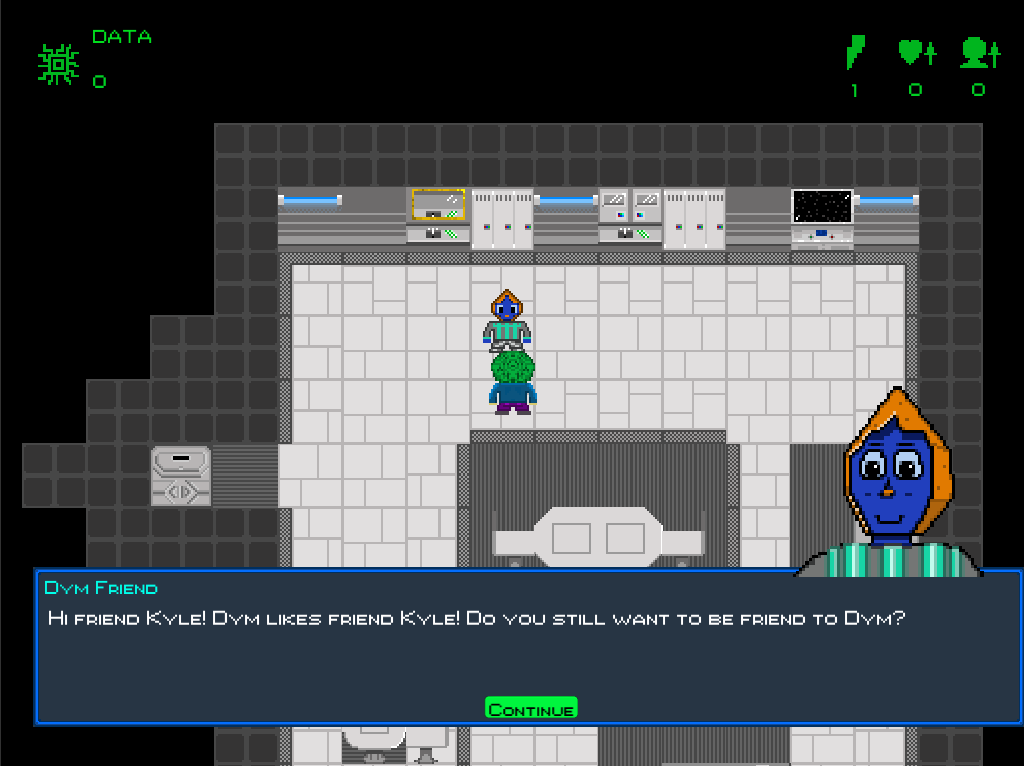 The "Dym" is a friendly alien race with a mysterious past. They're like, really, really friendly. This one's an ambassador and will be part of your team. His name is "Ssoadoapahiaap", but Kyle will soon find him a nickname that'll be easier to remember. The Dyms have a strange technology that their ancestors build, and they use it every day on their planet, but they have no idea how to replicate it or any theory about that science. They're not that smart and are pretty naive in general. But this Dym will be very usefull in your quest. 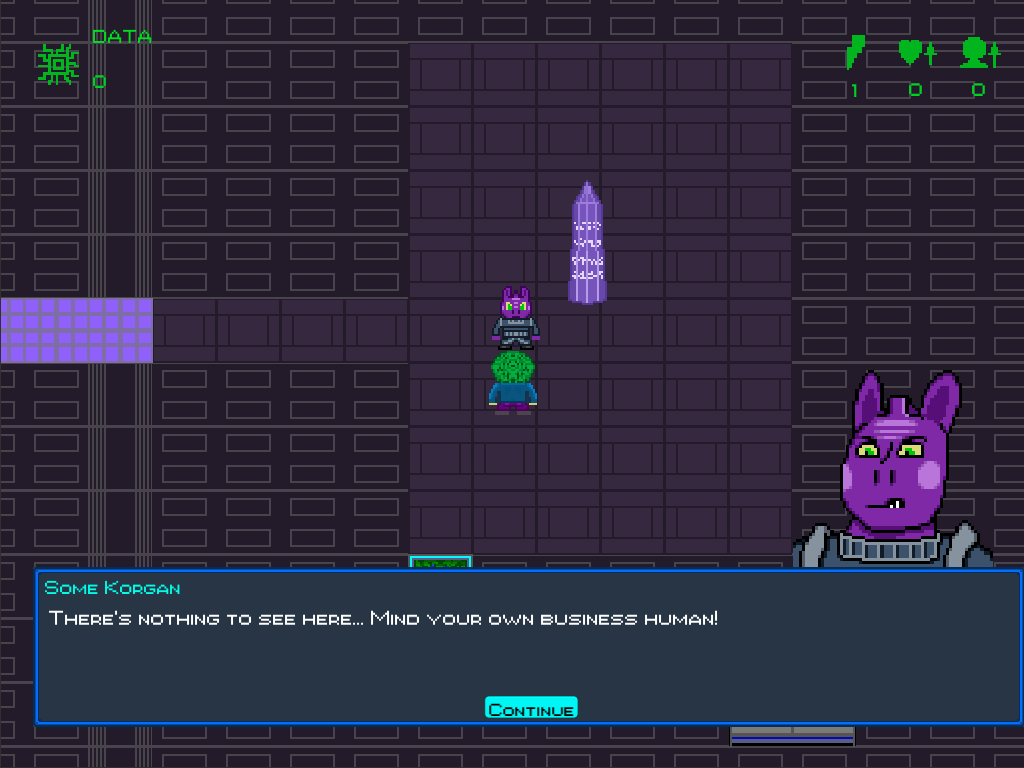 The Human race from earth has made contact with 3 distinct Alien civilisations. The first one was the Insects, that tried to invade earth some years ago and are comming back, it seems. The second was the Dyms, who are total pacifists and are willing to colaborate with us. The third one is the Korgans, except this one is a bit aggressive and has a bad temper. They want the human technology but are not willing to share their knowledge. Most of them are hypocrites and cannot be trusted. But they never made war to the humans because they know that we have serious army forces and have a more advenced technology. They come to earth for tourism and business and some are good entities. They prefer to not interfere with our politics... Still, we're sure they're brewing something...

That was a quick look at some of the main character. I'll talk about the story later. For now I'm trying to finish the Free Demo that will cover the first chapiter. If you want to support me you can follow me on Twitter, Facebook, and Instagram!