Eclipse: Skywyre Primitive Edition is a primitive version of the engine I've built for my personal projects over the last few years. No, the Engine doesn't have all of the features that my project has, but it is very stable and still feature-packed enough to make a game with right out of the box.

Please note that, if you are going to be using this Engine, you must credit me.

Without further delay, here is the feature list. Do keep in mind that I'm going off of memory, so I may keep out some features from this list.


~Bug Fixes~
(Also, if you wish your item to not have a description, simply put a "." in the description textbox. Same thing goes for NPC Say)

~Class Advancement Customization~
Without needing VB6 you can now customize what classes advance to what.

~Spinning~
You can spin in place by using the PgUp and PgDn keys.


~Basic Crafting System~
Basic crafting with the use of Recipe Items and Crafting Tools. Must be in a Crafting Zone to craft.

~Day/Night Cycle~
This Day/Night Cycle is dynamic and looks great. Day slowly turns to Night and blocks out view. NPC's can be set to spawn at Only Day or Only Night, leading to dynamic NPC spawns. You can set maps to Day Always or Night Always for buildings and caves respectively.

~Lights~
A new tile attribute. This will show a Light on the screen that flickers. Color is customizable from the Attribute Editor.

~Quests~
Alatar's Quest System with the ability to give Quests from Events.

~Spell Evolution~
Spells can level up if set to in the Spell Editor.

~Dynamic Stat to Spell Vital Scaling~
Choose from the Spell Editor which stat the Spell's vitals will scale from.

~Stealth Spells~
My stealth system. Renders you semi-transparent on your screen, while you are completely invisible to other players and enemy AI.

~Blind Spells~
New spell type: Blind. Renders a completely solid black tint on your screen for the duration. All attacks will miss during this time.

~Npc Spells~
Npcs will select a random spell from it's list and use that spell's cast and cooldown times.

~Npc Projectiles~
Npcs can now launch projectiles at you.

~Npc Attack Speeds~
You can now select a unique attack speed for each Npc.

~Npc Movement Speeds~
Select a movement speed for each Npc.

~Npc Multiple Drops~
Npcs can drop more than one item with varied percentage based chances.

~Npc Boss Option~
Selecting this will then announce globally when a player has killed the boss and in what map.

~Element System~
Items and Npcs can now have an element assigned to them. Each element has strengths and weaknesses to the others.

~Tool Power~
Items can now have an assigned tool power. If it is below the required tool power designated to harvest a resource, one cannot gather it.

~2 Handed Weapons~
Will un-equip a shield if equipped. Now has a higher damage ratio than 1 Handed weapons.

~Mage Projectile~
Selecting this option will make that projectile weapon scale off of Int rather than Agi.

~Stamina and Weight~
Items can now have an assigned weight. If you are carrying more weight than you have Stamina, you cannot run.

~Stat Reset Item~
Use of this item will reset a player's stats.

~Class Advancement~
Upon reaching Level 25 a player will be given a choice of a class to advance to. Currently hard-coded. Editor for this coming soon.

~Dynamic Class Restrictions~
You can restrict multiple classes from using an item.

~Item/NPC Tinting~
You can now tint items and Npcs.

~Weather~
Maps can have weather effects on them.

~Map Tinting~
Maps can be tinted.

~Map Fogs~
Maps can have a fog on them.

~Upgraded Map Report~
Map Report now opens a form which lists all maps. You can warp to any map from here.

~Party Only Maps~
Maps only accessible to players in a Party.

~Menuized Admin Panel~
Pretty nice and clean. You'll see when you use it.

~Hideable GUI~
Press the H key to hide the GUI.

~Stable, well constructed base.~
As far as I can tell, no bugs!

I also shipped this with the GUI I had initially designed for Skywardens but am having it redone later. Feel free to use it, but you must credit me. 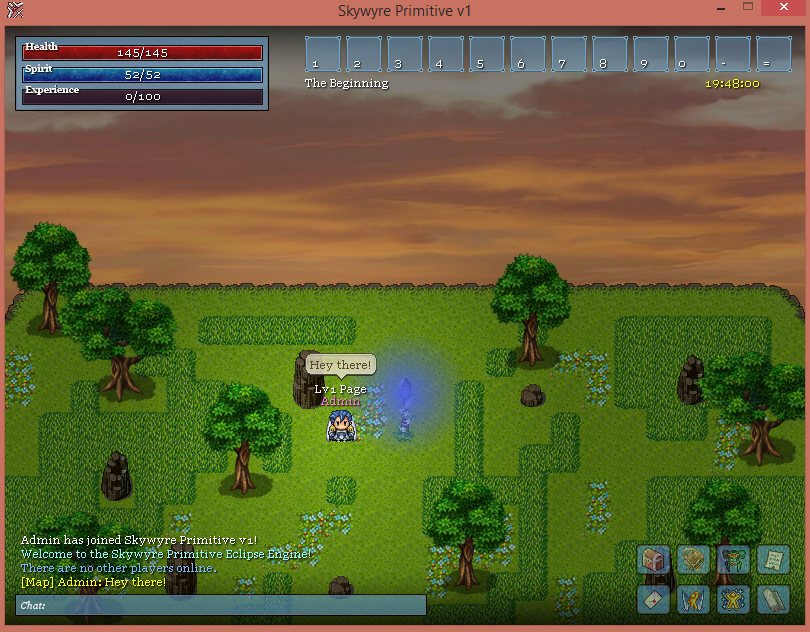 To promote Eclipse Skywyre 2D ORPG Maker and grow its popularity (top engines), use the embed code provided on your homepage, blog, forums and elsewhere you desire. Or try our widget.

RPG history takes place one month after the 10,000 players enter SAO, players are invited to enter the world of Sword Art Online to help players reach...

Making live collaboration across the globe possible. HeroEngine is an MMO development team’s dream come true - it streamlines the entire process of...

The Source engine is a 3D game engine developed by Valve Corporation. Its unique features include a large degree of modularity and flexibility, an artist-driven...

Corona Labs is the leader in 2D game and app development and is reinventing how the world builds for mobile, connected TV, and desktop platforms. 300,000...

AndEngine is a free 2D OpenGL Game Engine for the Android platform.

No engines were found matching the criteria specified. We suggest you try the engine list with no filter applied, to browse all available. Join now to share your own content, we welcome creators and consumers alike and look forward to your comments.

Mod SDK & Community
Built a game for Eclipse Skywyre 2D ORPG Maker and want to support mods? Try mod.io, a cross-platform mod SDK created by Indie DB which makes it easy to get a mod community up and running in-game. Currently seeking games to integrate and promote