This week's screenshot shows an edit to a previously-shown part of the level-four cutscene: 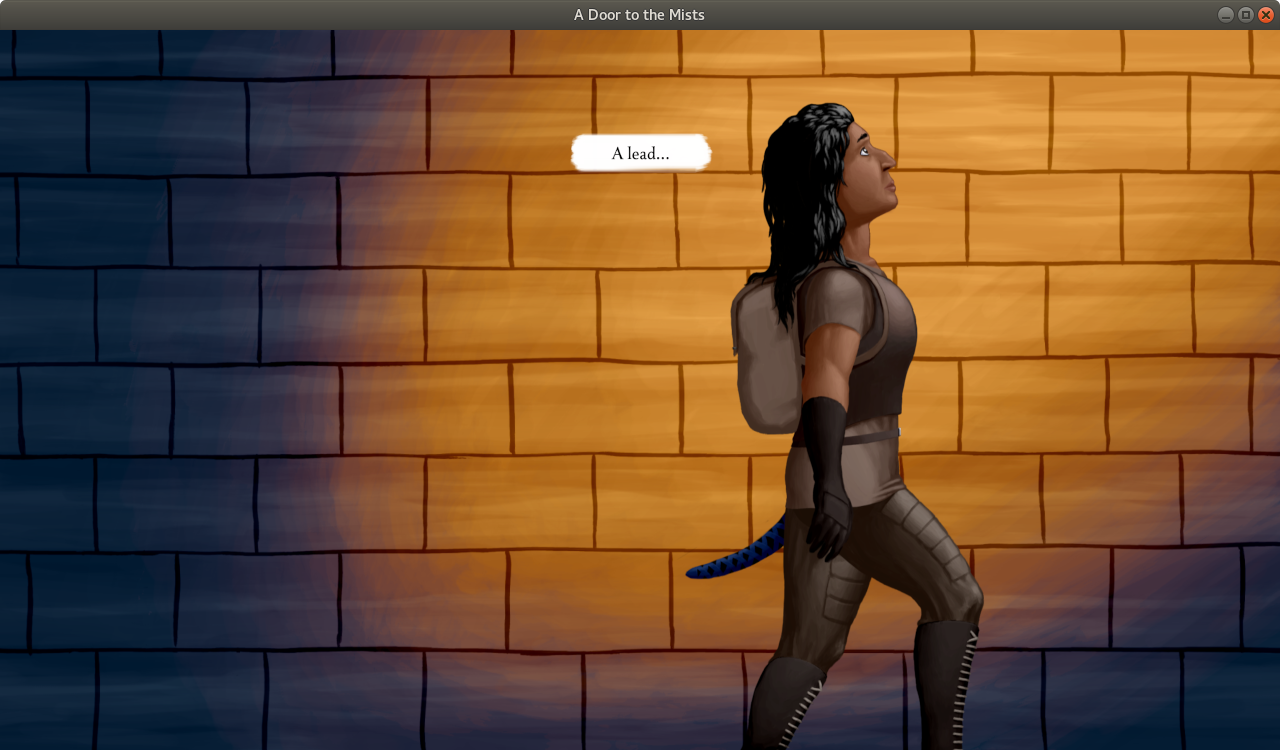 The week just past was once again given to the painting and construction of that cutscene:

To start with, and as shown above, I extended the backdrop to the first scene of the cutscene. (And incorporated a bluing of its shadows.) It felt, I think, a little out-of-place to start the cutscene with a square aspect-ratio when previous cutscenes had been wider, especially as there was little reason to confine that scene.

I also painted the elements for the final two scenes of the cutscene--to be specific, I painted the second-to-last from scratch, and edited a backdrop from another cutscene to make the last.

These two scenes for them lead-in to level four itself: the second-to-last shows the narrow street onto which the level's building opens, with a hint of the city beyond; and the last shows the doorway of that building, as a segue into the player finding themselves standing within.

As mentioned, the backdrop (and sole element) of that last scene is an edit of a previous one: the cutscene for level two ends similarly, which allowed me to simply change the wall-surfacing to fit.

(I currently have it in mind to do something else for the level three cutscene, so that I don't have multiple cutscenes in a row ending on more or less the same shot. ^^; )

Moving on from the painting side of things, work continued on the construction of the cutscene.

This involved a few changes, but perhaps most salient was that I constructed those final two scenes.

Neither was enormously tricky--the last in particular is just a slow zoom into the backdrop. However, the second-to-last did present two minor challenges:

The first challenge was the animation of a crowd on a distant street; this I ended up handling in a script, using time and sine-functions to fade between variations of the crowd.

The second was that I wanted to zoom in (as with the final scene), but felt that doing so my usual way--i.e. zooming each individual element--might be awkward.

Now, I already had the means to zoom the scene itself as a whole--but that would have affected the overlaid text, too, which was not an effect that I wanted. So, concluding that it seemed unlikely that I would often want text to be included in such scene-level animations, in the week just past I altered my cutscene system such that text is separate from them. As a result, I now have the scene zooming in, but with the text remaining static over it, as desired. ^_^

Here's a look at the resulting scene:

Continuing with technical changes, I made a small modification to my cutscene editor: it now supports the toggling of sound and music each, where before it simply used the audio-settings applied in the main game. This new approach should make dealing with cutscene audio a little more convenient, I think!

Speaking of sound, I began looking for music for the cutscene. This is very much still a work-in-progress--but as a result, I may have settled on music for the game's very final cutscene...

And finally, I also added a little bit of extra movement to the third scene--a scene that is rather wordy and static compared to the others--in the hopes of making it feel a little more engaging.