Post news RSS Who ordered another round of shots?!

When I walk in the mine, All eyes on me, I'm with the Deep Space crew, All shots are free!

Two days ago I gave you a small insight into our first experience showcasing a game at a games festival, which is something not a lot of people get to do, but we know that what you really care about is the game itself, so today we just have screenshots! Want the chance to try out Deep Space Mine? Make sure you read to the bottom ;)

At the start of the game players are shown The Market. The main panel is split into two distinct parts. On the right you can see the four types of mineral, the stock you own of each one and the buy and sell prices. As you can see at the start of the game they all cost the same and you start without any minerals. On the left you can see the equipment you can make, which for now is just drills. Drills cost 100 credits and 4 minerals, so with your starting credits you can afford to buy 4 minerals and combined with the remaining credits you can buy an additional drill. 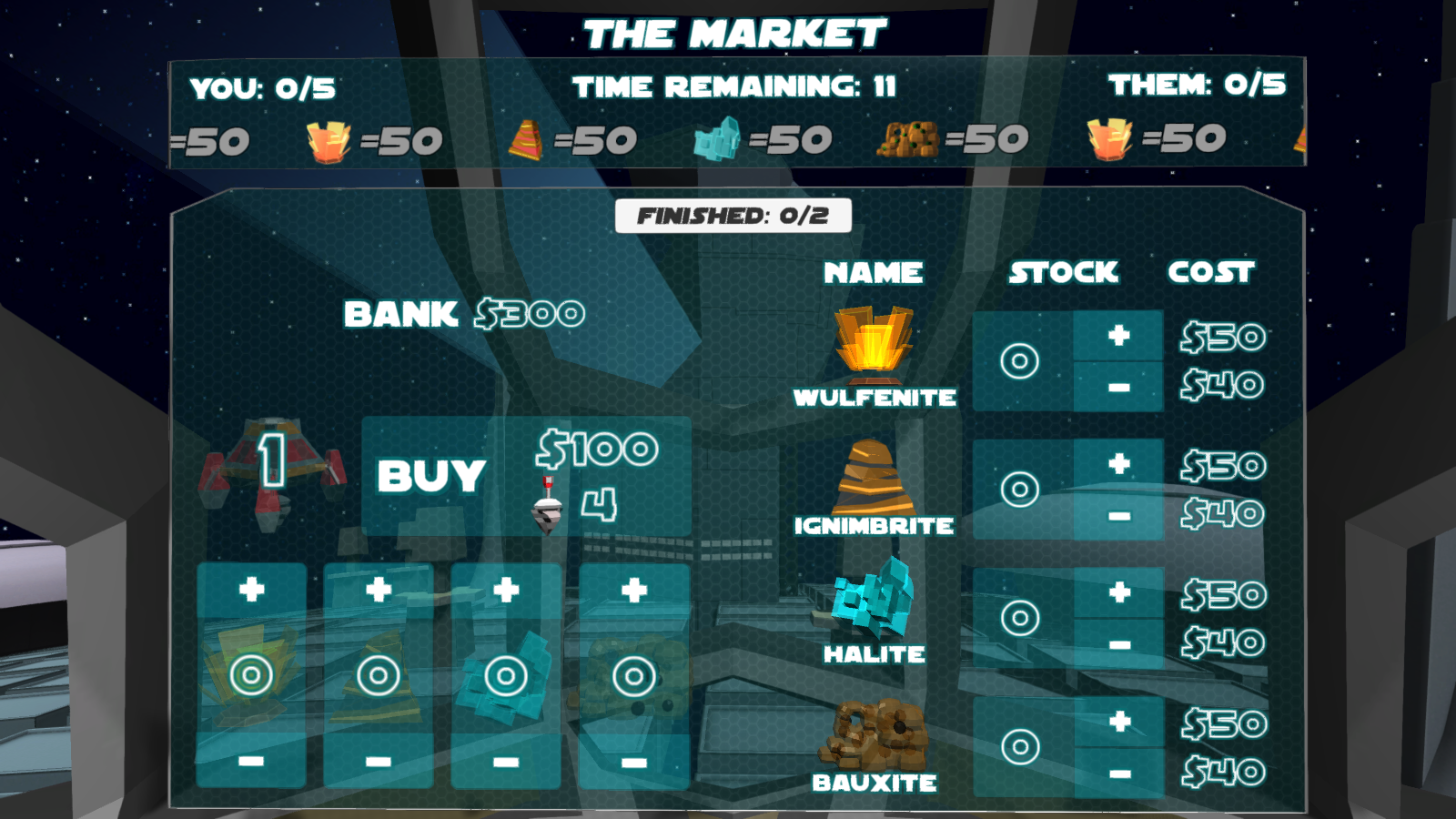 The top panel shows the game status and persists throughout the game. Here you can find the current buy prices of each mineral, the time remaining in the current phase and, of course, the scores. When the time runs out, or both players have clicked the finished button to indicate they are ready to move on, the players move into the next phase.

The other, and bigger, half of the game is farming. Here players are shown a Planetary Overview which shows the state of the game world. As it is the start of the game in the screenshot below there are no flags as neither player has gained control over a planet, and thus the score is also 0-0. However you can see that the prices of the minerals have already changed as the players will have bought minerals to create drills. 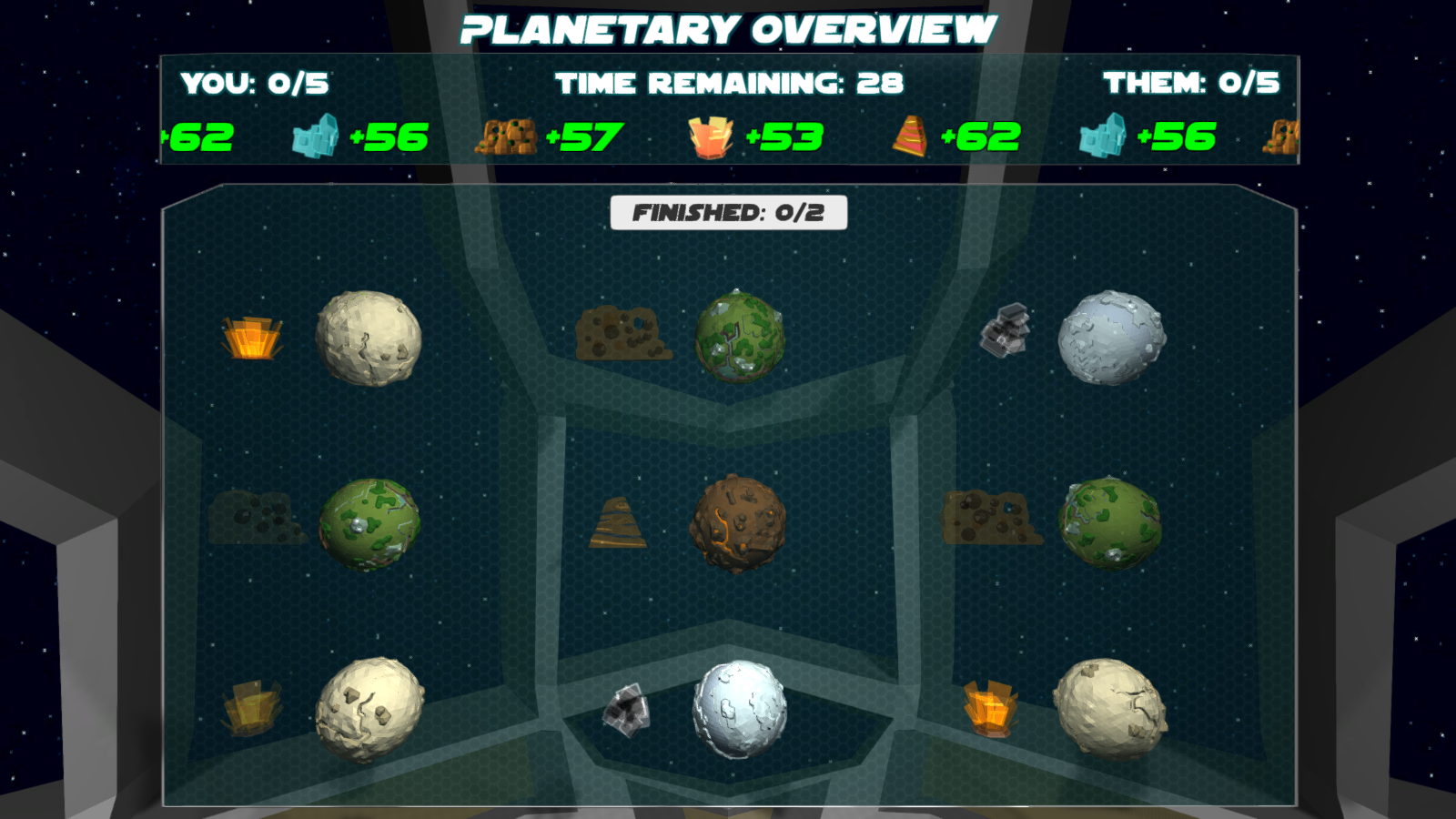 To determine how many resources you get from a planet, and also to gain ownership over a planet, you need to scan the planet for mineral deposits and call in a drill when you think you've probed for the highest number of minerals. You can see below the player has chosen to go to a volcanic planet as they offer ignimbrite and that is the most valuable mineral at the moment. 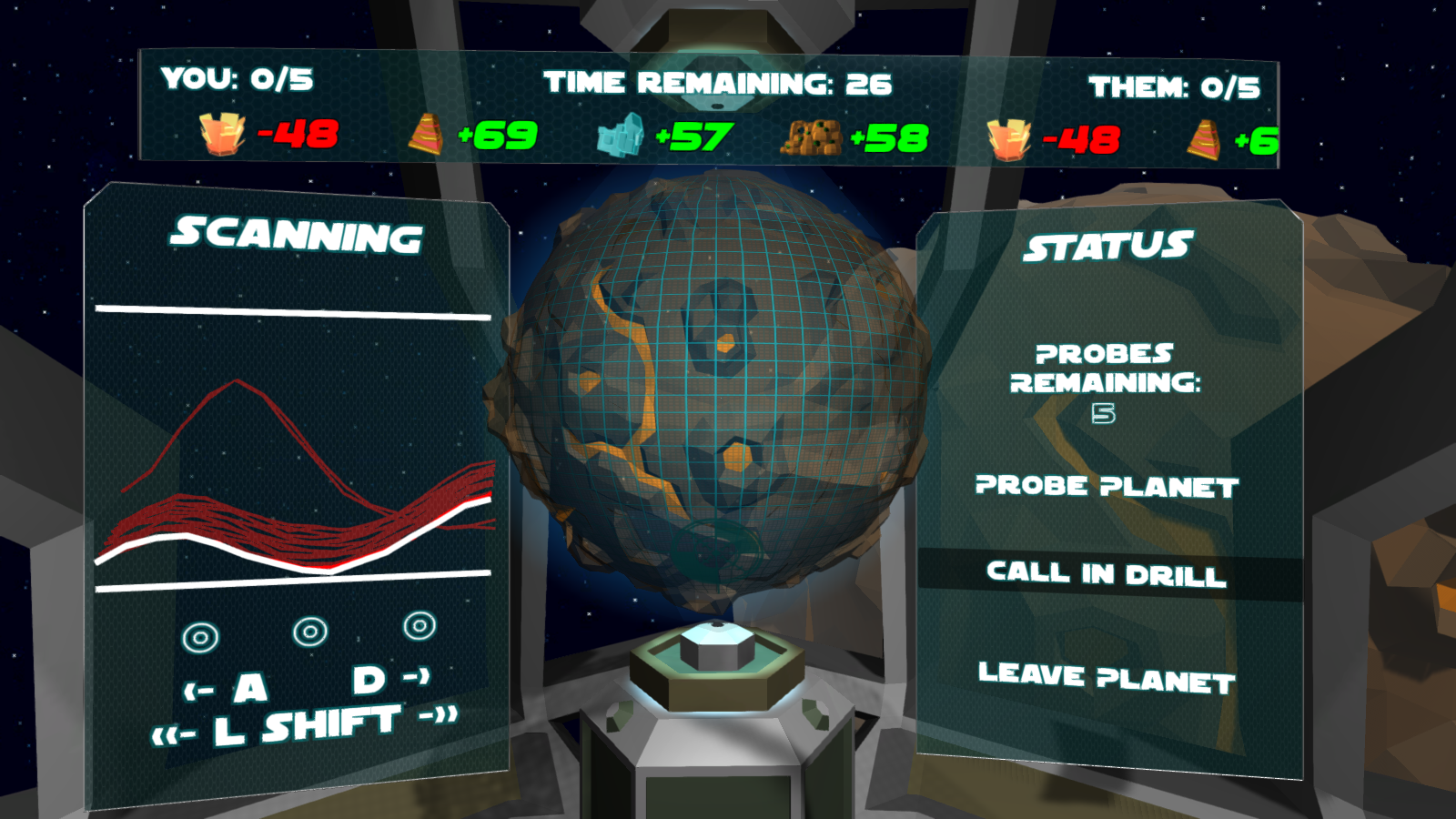 Comparing the above and below screenshots you can see the player has used four of their five probes (on the right panel) and their three best probes found 8, 7 and 6 ignimbrite (on the left panel). These values are determined by the average height of the graph, and in the screenshot below you can see this marked by the horizontal lines. Once the player has probed at least three times, they can call in a drill and will be rewarded with an average of their three top probing values, which in this case will be 7. 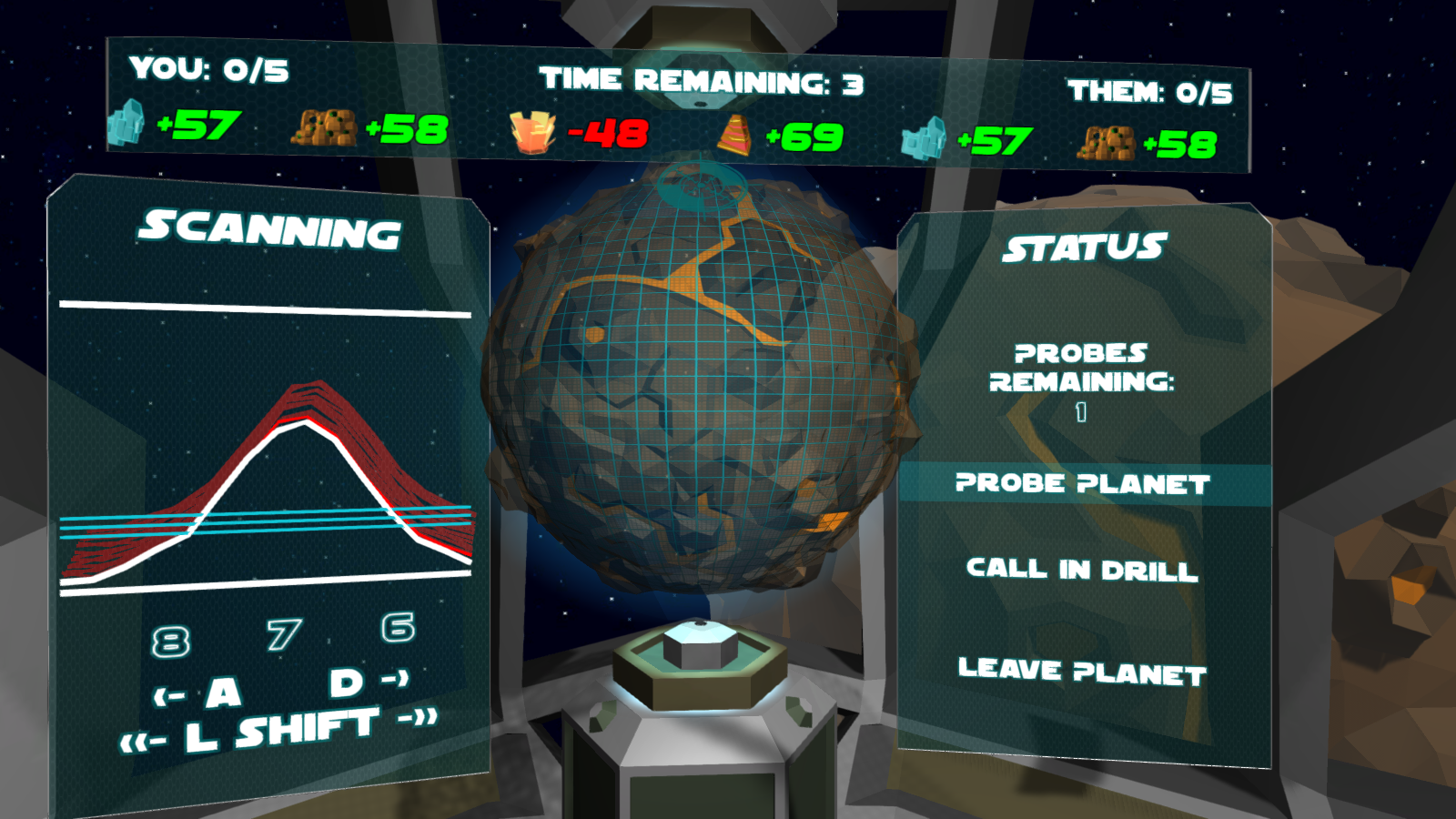 After the round has ended and the player has visited the market with their new minerals to buy more drills, they will see the planetary overview once again but this time with flags. Here we can see the player has gained control over one planet and their opponent has none (and in fact didn't mine any planet). 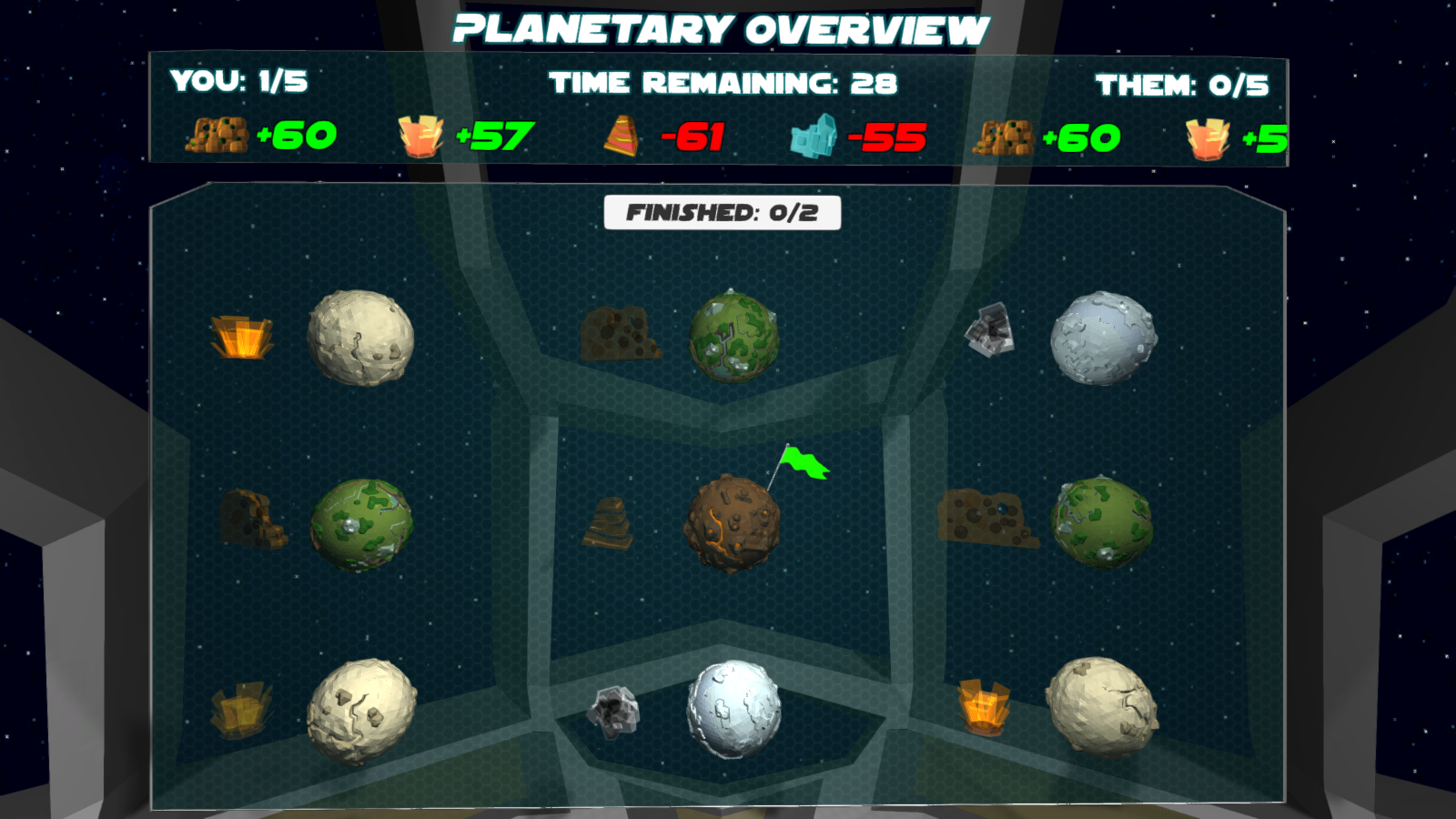 After another round has ended we can see the new planetary overview below. Here we can see both players have gone to the same planet as there are two flags on that planet, but the opponent's flag is smaller. This means they didn't gain control meaning they will have mined fewer minerals from the planet, and so the player is winning 2-0. 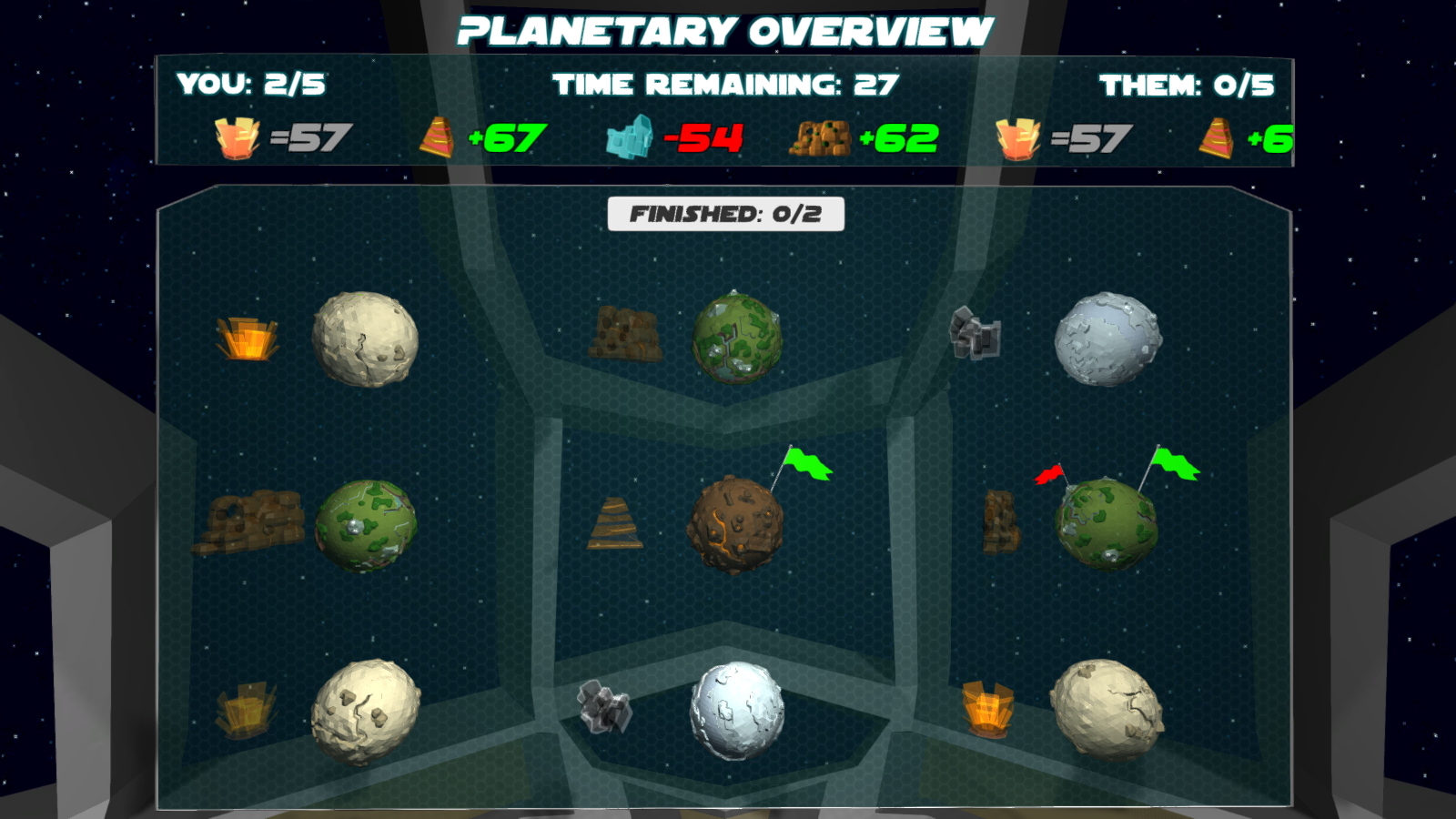 After a number of round players will have stolen planets from each other and the scores can go back and forth quite quickly. Players will be second guessing which planets their opponent will go to to decide which planets they want to go to, while also trying to make as much money as possible to make more drills. Because of the limited time each round players will only be able to go to so many planets. They will decide if they want to spend more time probing to make sure they become the owner, or call in a drill as soon as possible getting few minerals but hoping your opponent doesn't go to the same planet so you gain control. 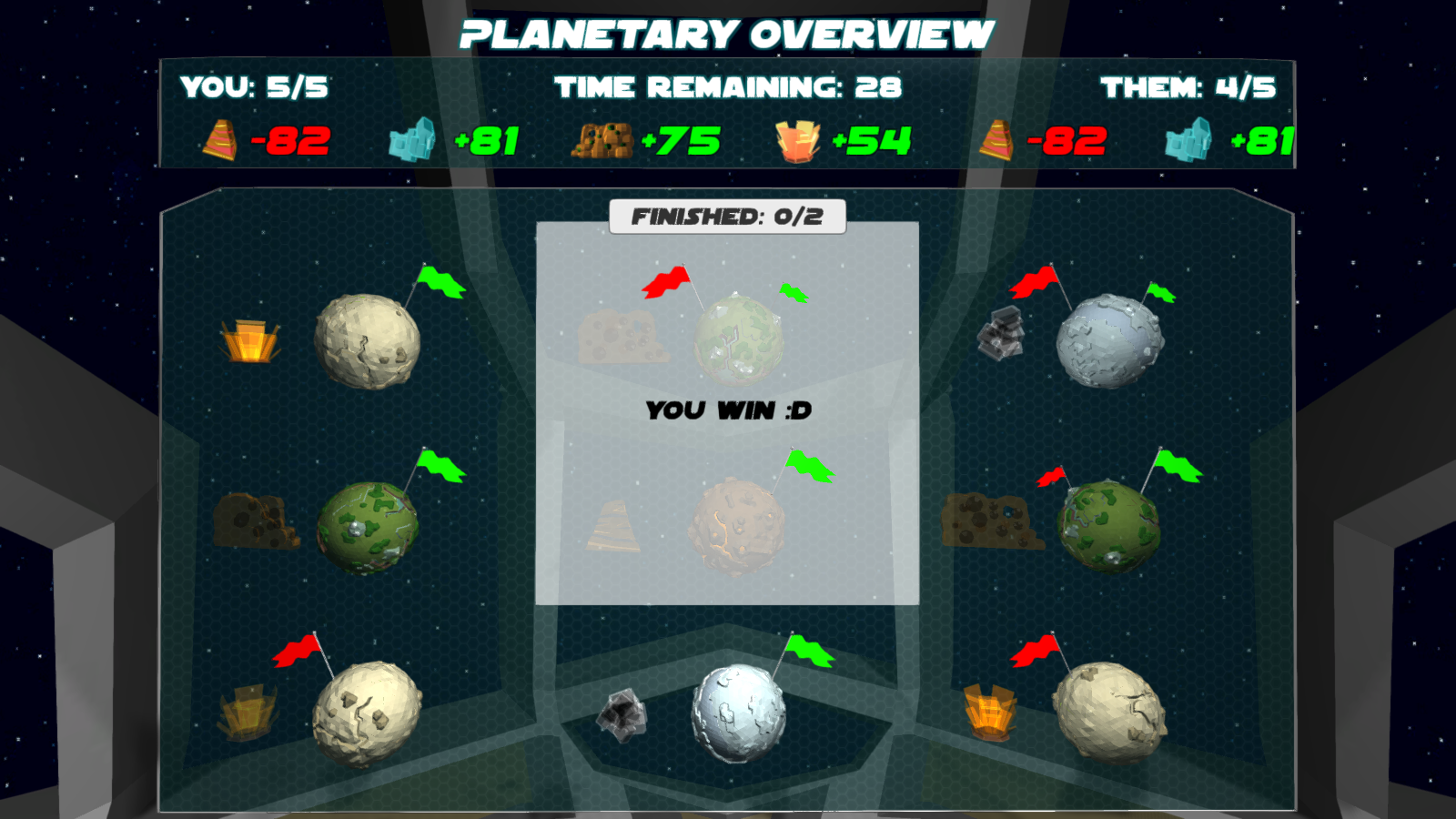 It's always good to share screenshots of our latest work, but next we want to show you footage because we know that's what you want! To make sure you're up to date with the latest content make sure you track this game. Are you interested in playing Deep Space Mine? Drop a comment below saying what platform you would like to play it on (PC or Mac, but potentially also tablets so mention that too!) and we'll see how much of a response we get to open up a beta.

I must say, the opponent must have really sucked at the game ;)

Haha, you're not wrong! It was done largely for demonstrative purposes to be fair.