Screaming crystals! Starry storms! It's the year's end so come see what's up with Underspace.

Hello Starchasers! God this year went by fast. Too fast. It seems like only last month that we were in what, March? Yeah last month was March. Anyway, as Santa slides down the Chimney at the end of the month just remember: it’s your sworn duty, as is mine, to make sure he doesn’t escape to assume his final form. To help you in the unfortunate trial you’ve untaken, I’ve prepared for you a series of updates detailing all the progress we’ve made in the past month. Check it out.

As always, this is a paraphrasing of the main article, which you can read here.

The first real, tangible bits of the campaign are now in. Some of this month was spent working out another (this is what, our third?) scripting system, which has a lot of robust options for spawning and managing things in the game.

There’s also situations where multiple characters need to have a conversation. To that end we made it so that the comm UI can easily switch between multiple people at once.

Missions now have additional kinds of things, such as being able to override or offer unique rewards. There won’t be too many examples of this in the normal game, but modders could do things like add missions that only appear in storms that award unique weapons, for example.

Finally, we’ve been adding and implementing more capital-class ships, mostly as encounters during the main campaign. For example, this here pirate gunboat, which often serves as an early game miniboss. 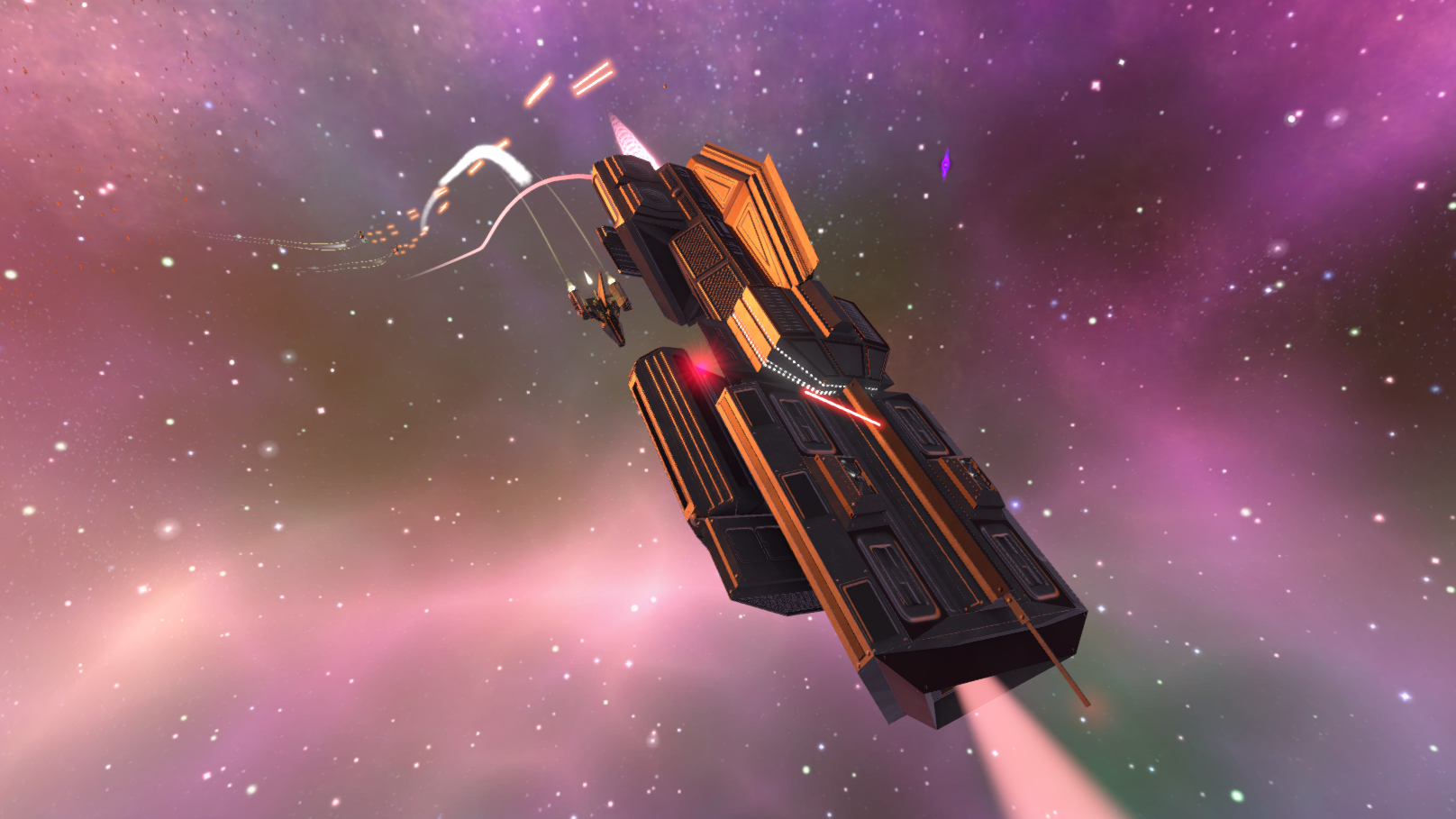 Storms received a huge mechanical overhaul, because the old system had a lot of issues (limited saturation and spread, localized itself to only a few systems). Plus, most of the underlying mechanics weren’t hooked up. 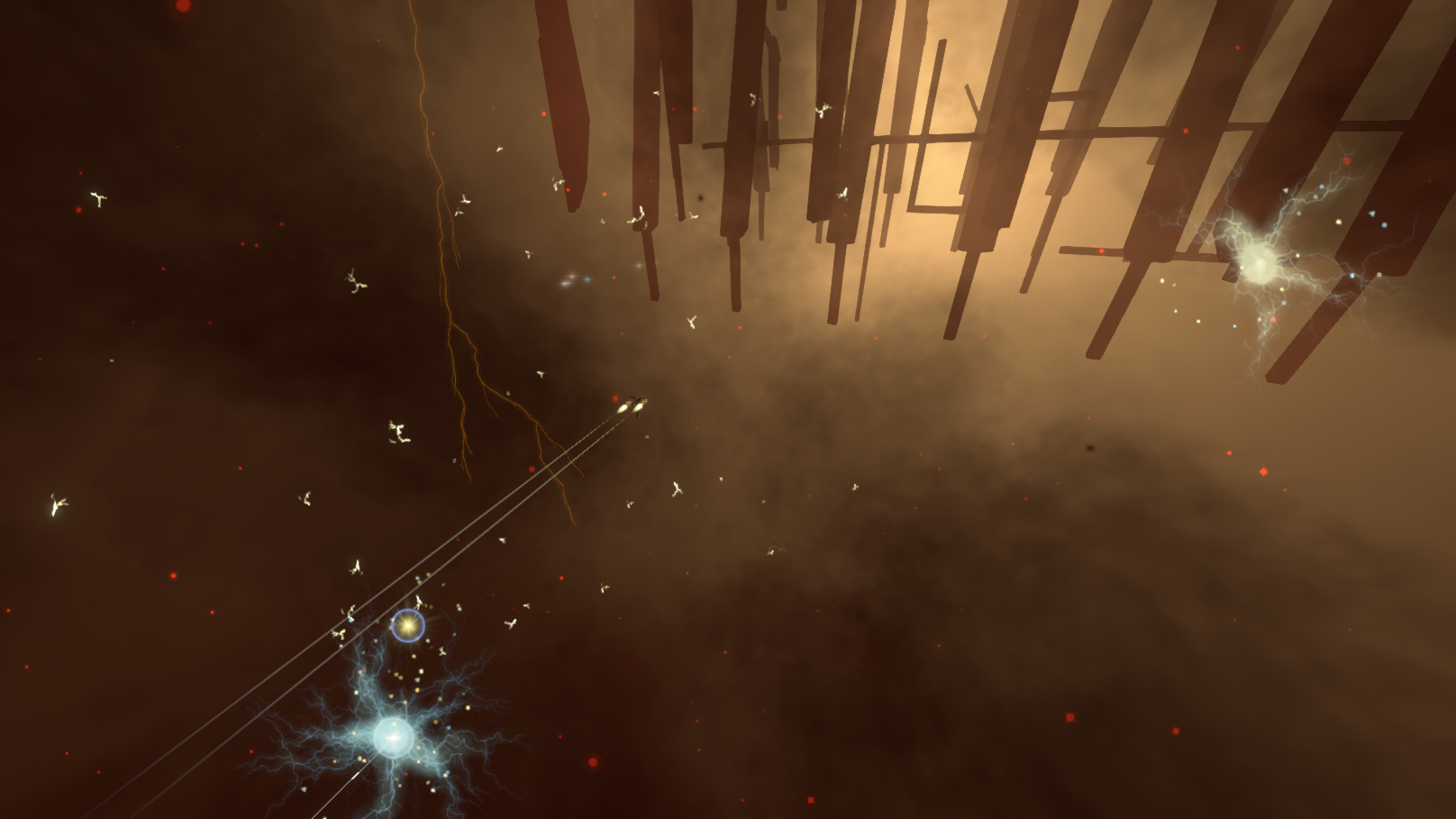 Storms now are based on a regional growth and intensity system. They spawn in a specific node, then slowly spread or intensify as time goes on. A storm that’s too powerful might be destroyed by another starchaser, or warp into a very dangerous and deadly hyperstrom. You can also claim a storm, which will stop other starchasers from going after it. 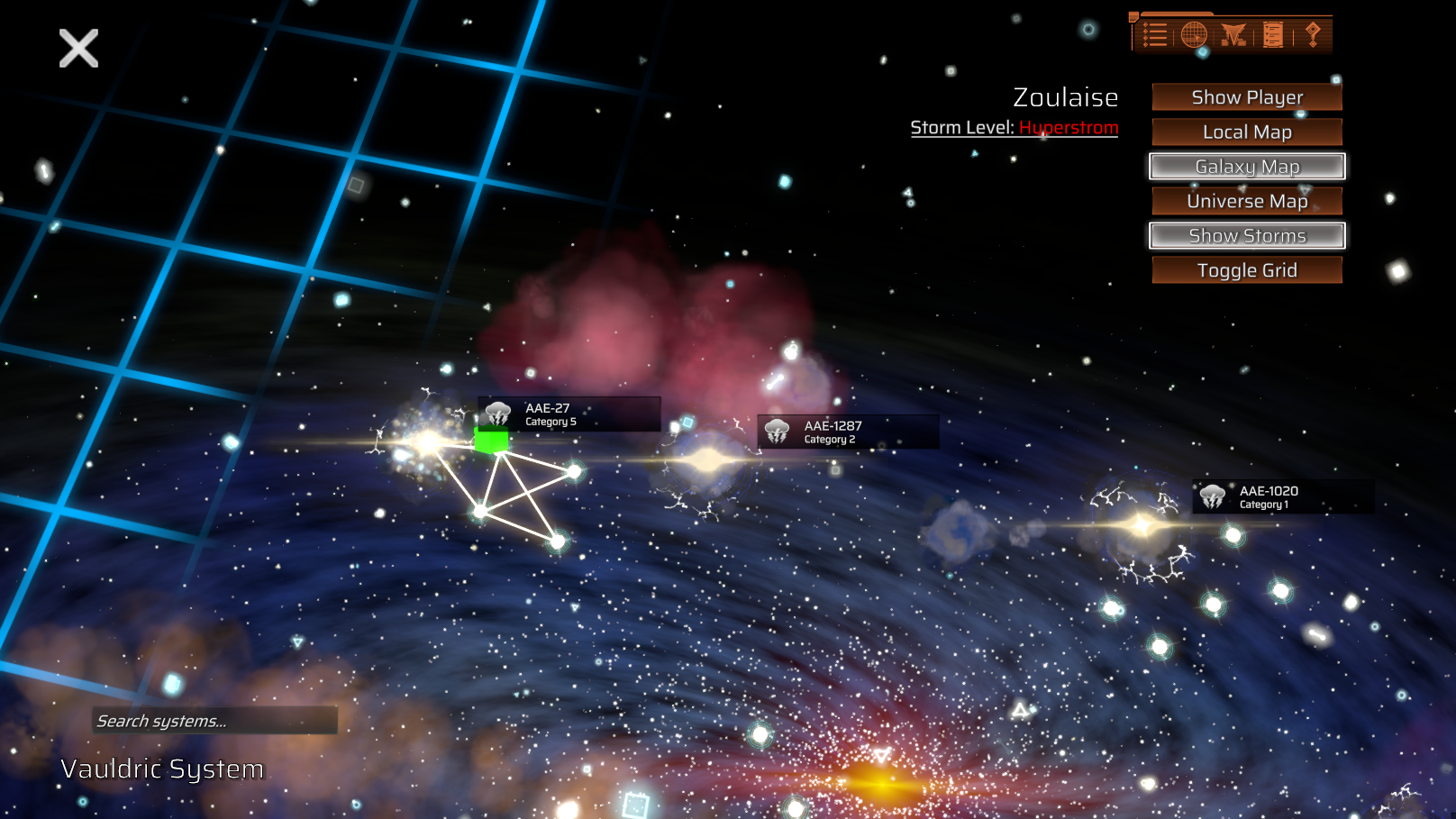 When in a system hit by a storm, there are many various effects. The ships that spawn will go up several levels (dependent on the intensity), and prices in a system for buying AND selling go up by 50%. In place of normal legendaries and ace pilots, strange ships with strange abilities spawn. And finally, jumpholes (but not gates) become unstable, and can sling you across to random systems. 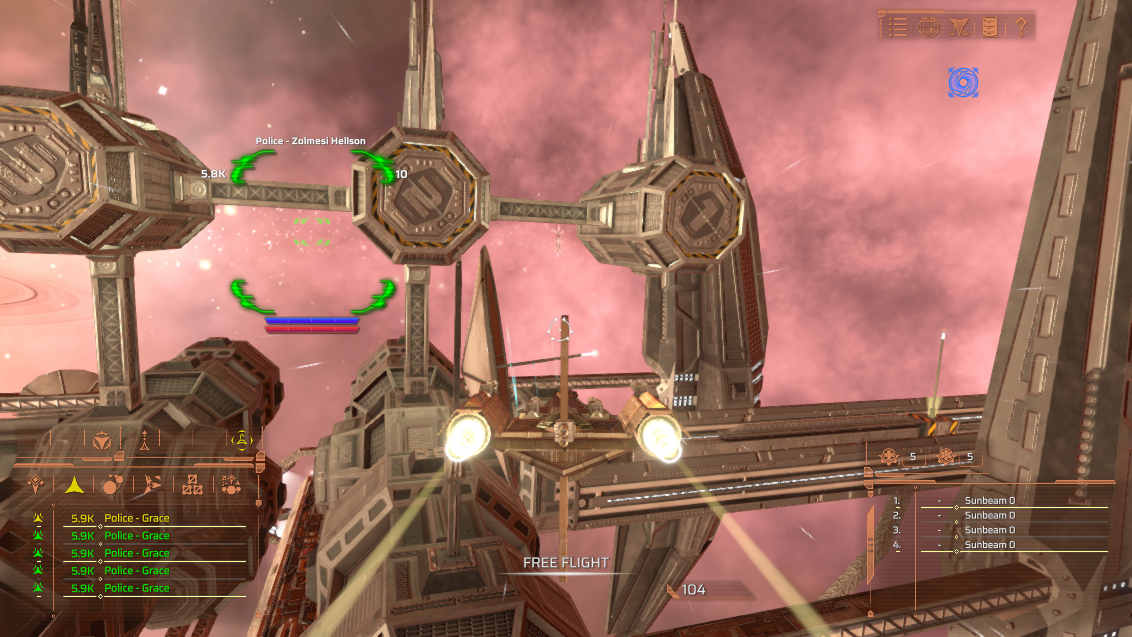 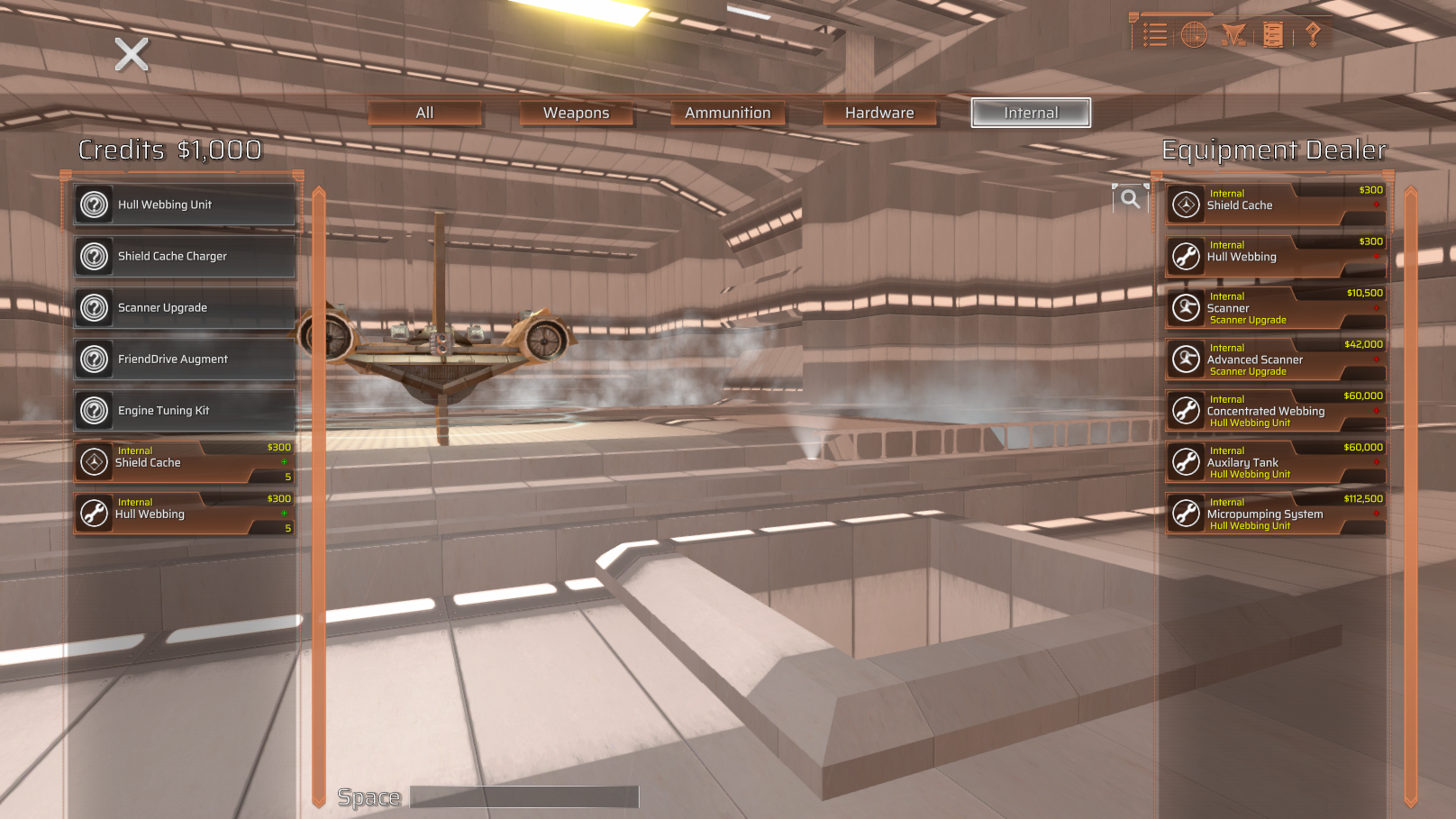 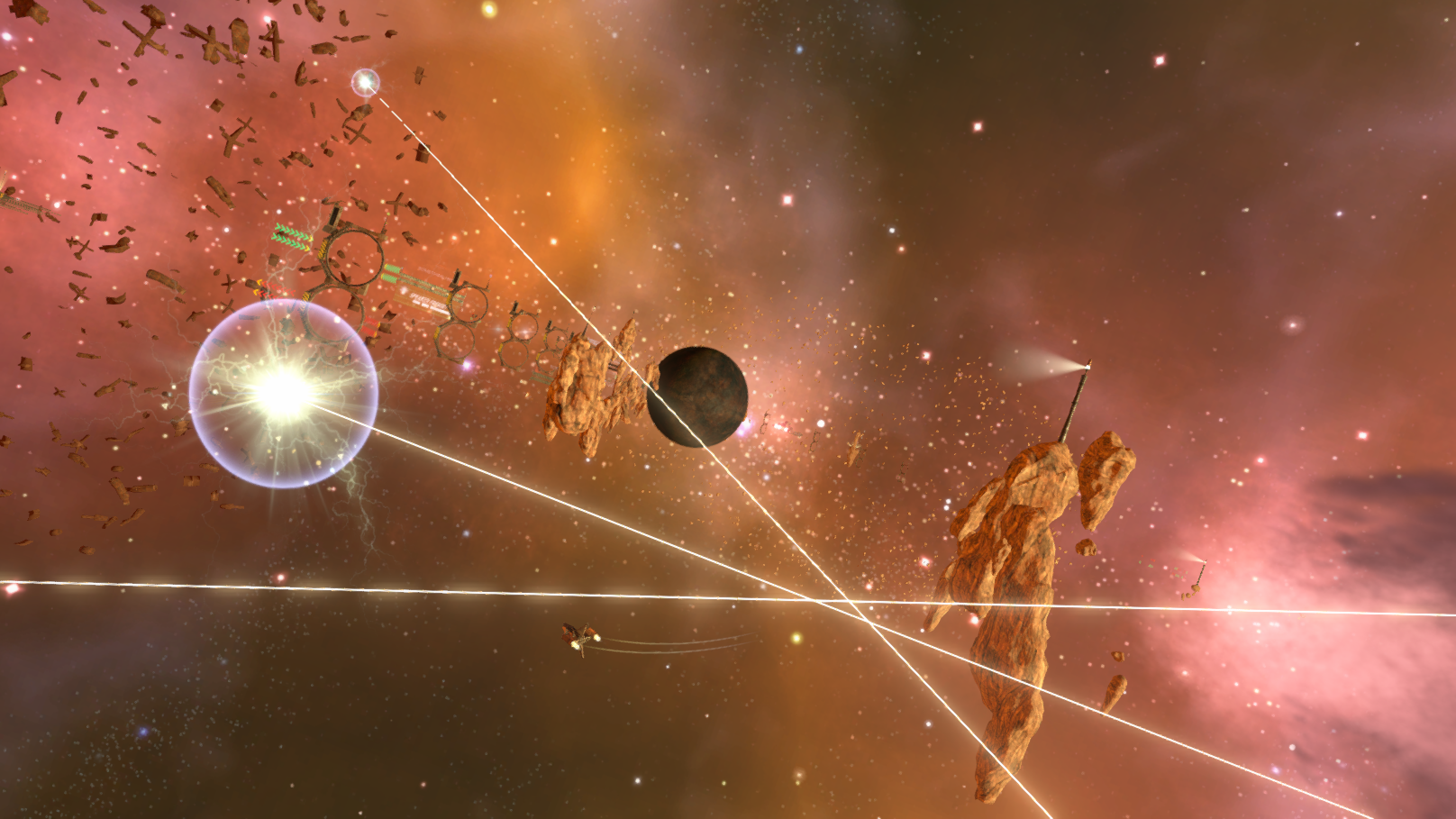 When in storms, things get freaky. Various hazards spawn, lightning flashes light up distant objects, and everything is chaotic as you try to make your way to the central rift (which will let you destroy the storm). Don’t worry though, you’ll often encounter other unique starchasers that might help you out! 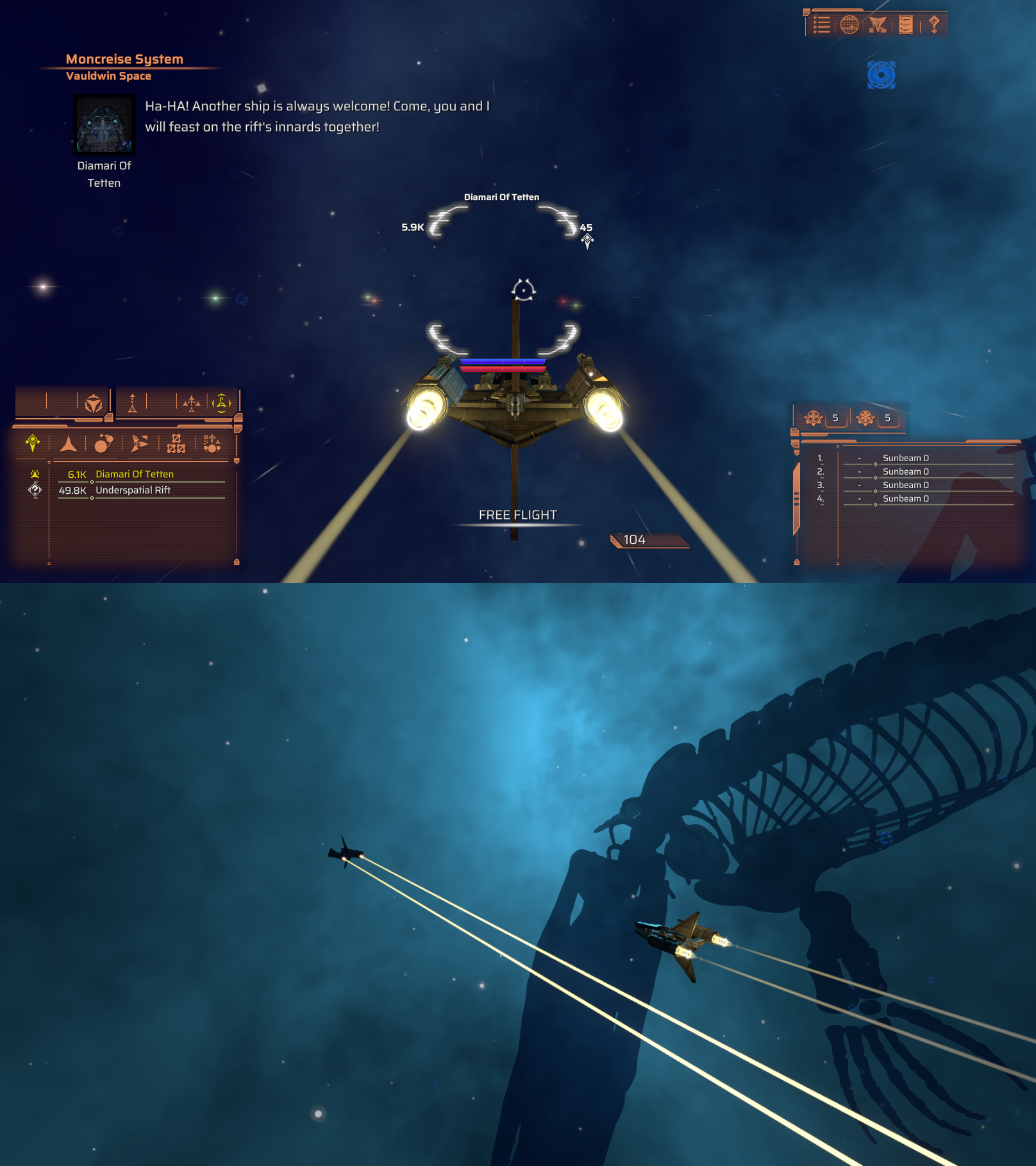 And as always, there’s the usual batch of fixes, tweaks, and features.

Docking’s gotten some improvements; manual docking will display where it wants you to go, while we’ve tried, once again, to rectify autopilot docking spinouts.

There’s lots of new UI feedback elements too. Ace pilots have icons, repair items report how much they repair, and more. 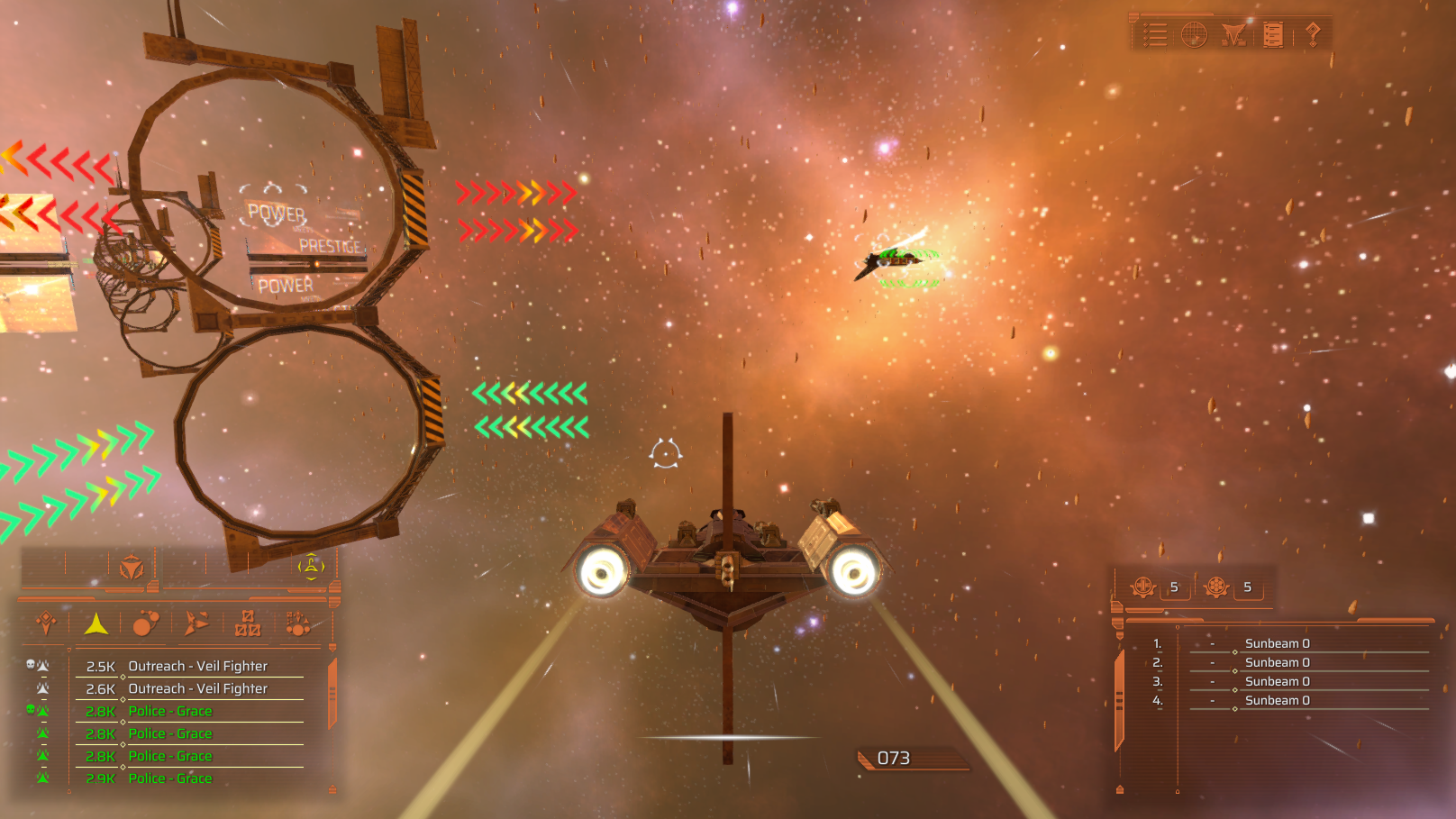 You can also fast-forward through cutscenes.

Finally, if you don’t want to interact with station UIs, things like the job board, news board, and ship services now have physical objects in the world that can be activated to do the same thing. 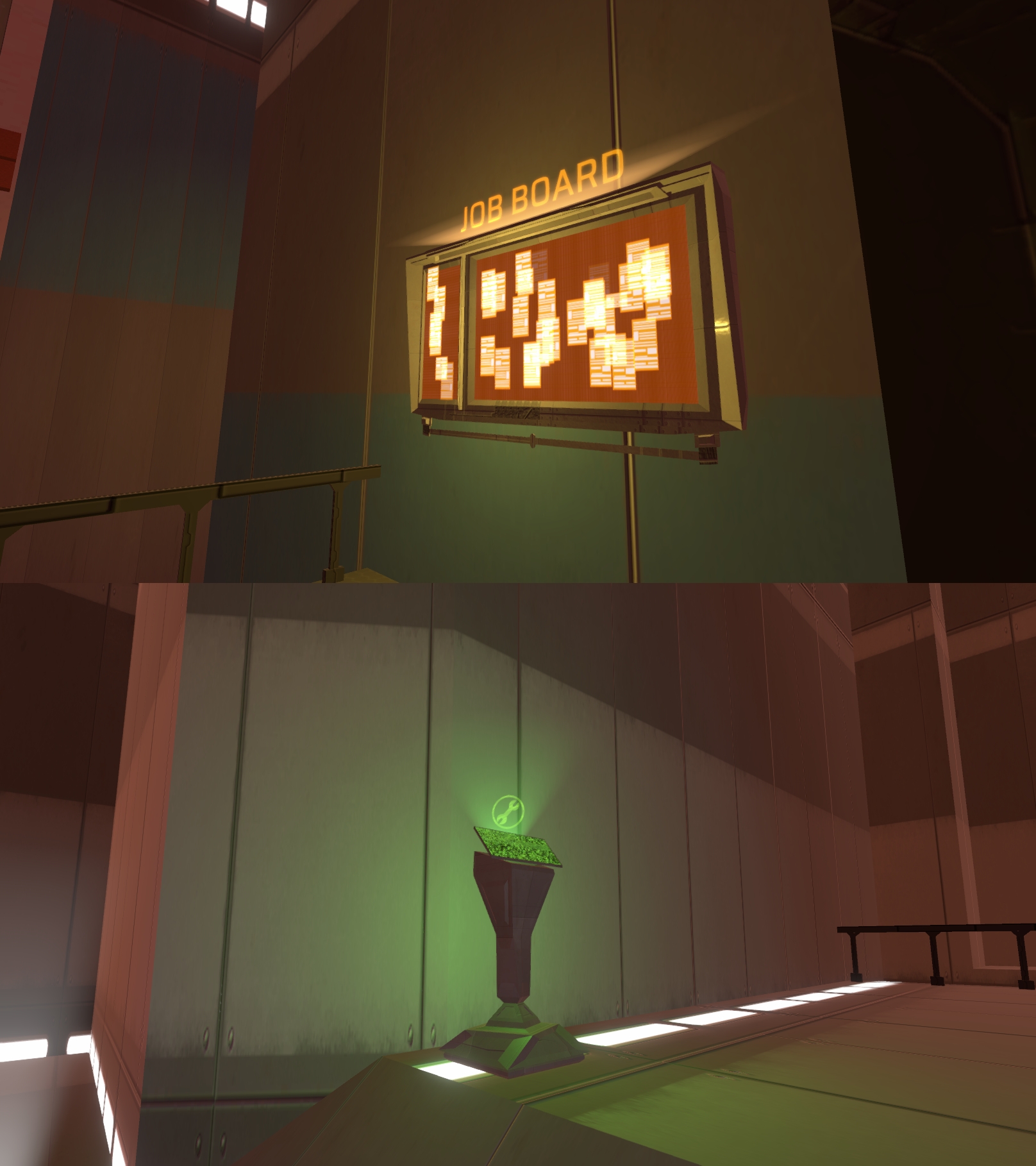 Finally, there’s the usual crop of assets. This month we implemented animations and texture variants for everyone’s favorite screaming swear crystals: the Ast. 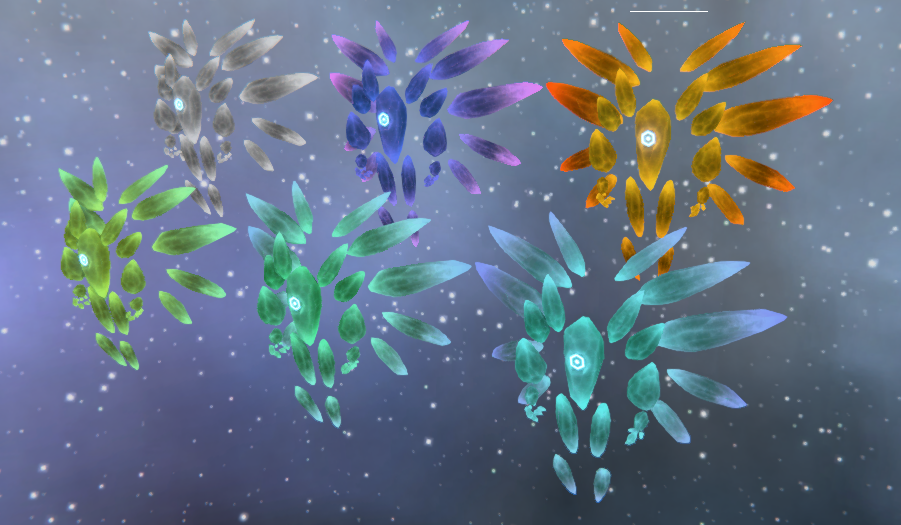 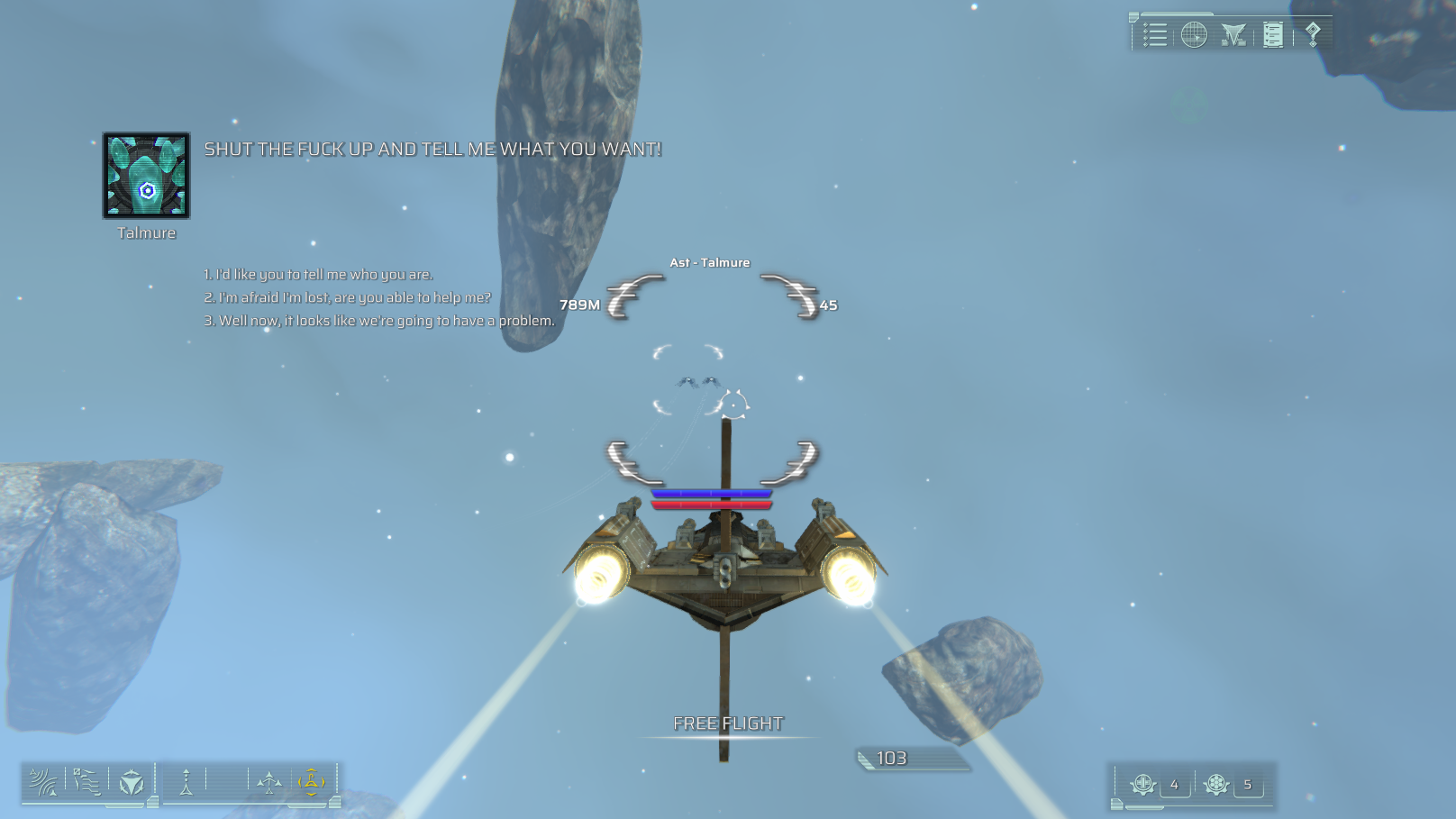 That’s all for this month, check back next time for more campaign work and party member stuff!

Those full white RGB:255 engine exhausts and same for rockets and your projectiles should all be decreased in brightness, made transparent and colored: like blue engine exhaust for the enemies with lowered intensity and you are shooting brighter colored laser-plasma [but not white] into those enemy engine exhausts - as we see in your video. But this way we actually will be able to see something, other than being eye-strained + blinded by those white patches (growing-with-battle-intensity) currently in your video. This way you can communicate more information to the player = about your amazing engine exhaust effects and the nicely done laser energy-projectile particle effects.