Post news RSS The Impact of your Feedback! | Insurmountable DEVBLOG #2

A brief look at all the changes and decisions we made for the camera, the visuals and some events in the last 2 weeks.

After the immense amount of feedback we received at our first public presentation of Insurmountable, we had to decide which tasks we would like to attack first.

To do that we had to analyze the feedback and we analyzed ALL the feedback, to do you guys justice and BOY that was a loooot.

While doing that we had some staff problems. So we're one man down.

However, this doesn't stop us from giving the best we can and we're already working on a solution!

So let's get started with all the things we changed:

As mentioned in the last DevBlog, we want the player to have a good field of view at any time to plan their next moves.

In order to achieve that, we worked on the visibility of the character.

Previously, in narrow sections, the camera zoomed onto the character to fixate him into the middle of the screen. This approach took a lot of control from the player, because it limited the field of view quite a bit and didn't fully achieve the result we wanted to have. 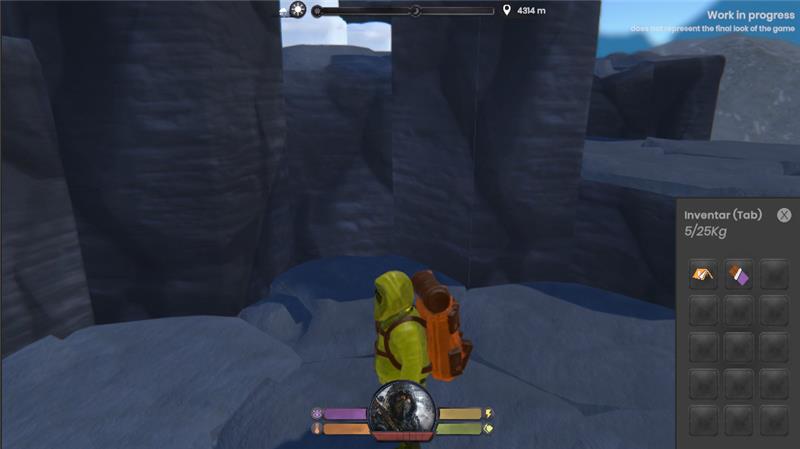 We think it's best to let the player keep full control of the camera in any situation.

So we made the decision to make all hextiles and objects between the camera and the character transparent and not zoom in anymore.

Even though we think this approach works better, we're still not fully happy with this solution.

On the one hand, it gives the player more control and more options in planning your next steps, but on the other takes a lot of the immersion of being in a tight narrow spot, which you have to get out of.

Well, that's what we think.

Which of the two camera options do you like more? Do you want to always have the full view of the map and the surroundings or do you want to immerse yourself into situations where you don’t have full control?

No matter what happens, we keep working on the overall camera settings.

We asked you guys on our Discord (btw, join our Discord ;) ) for your ideas and took some inspiration to implement more follow up events (events that only occur, if you’ve made certain choices in previous events) into the game. We already put several new events into the game.

So, here's how one, which we call the “Rescue Event”, works:

The event can be triggered by stepping on an Encounter Event Field.

You encounter a mountaineer in a crevasse (see screenshot). You can choose to help him, at the cost of Energy and the risks of an injury, or ignore him.

If you manage to rescue him (which is not guaranteed), you get back some Sanity and the feeling of being a hero - that’s it.

*If* you rescued him, you have a *chance* to meet the same mountaineer later (again on an Encounter Event Field, which triggers only if you rescued him AND are low health).

If you do, he offers you some healing herbs. If you take them, you get some health back (a very valuable reward).

If you took the risk of helping the mountaineer, there is a chance that he will come to aid when you are injured. 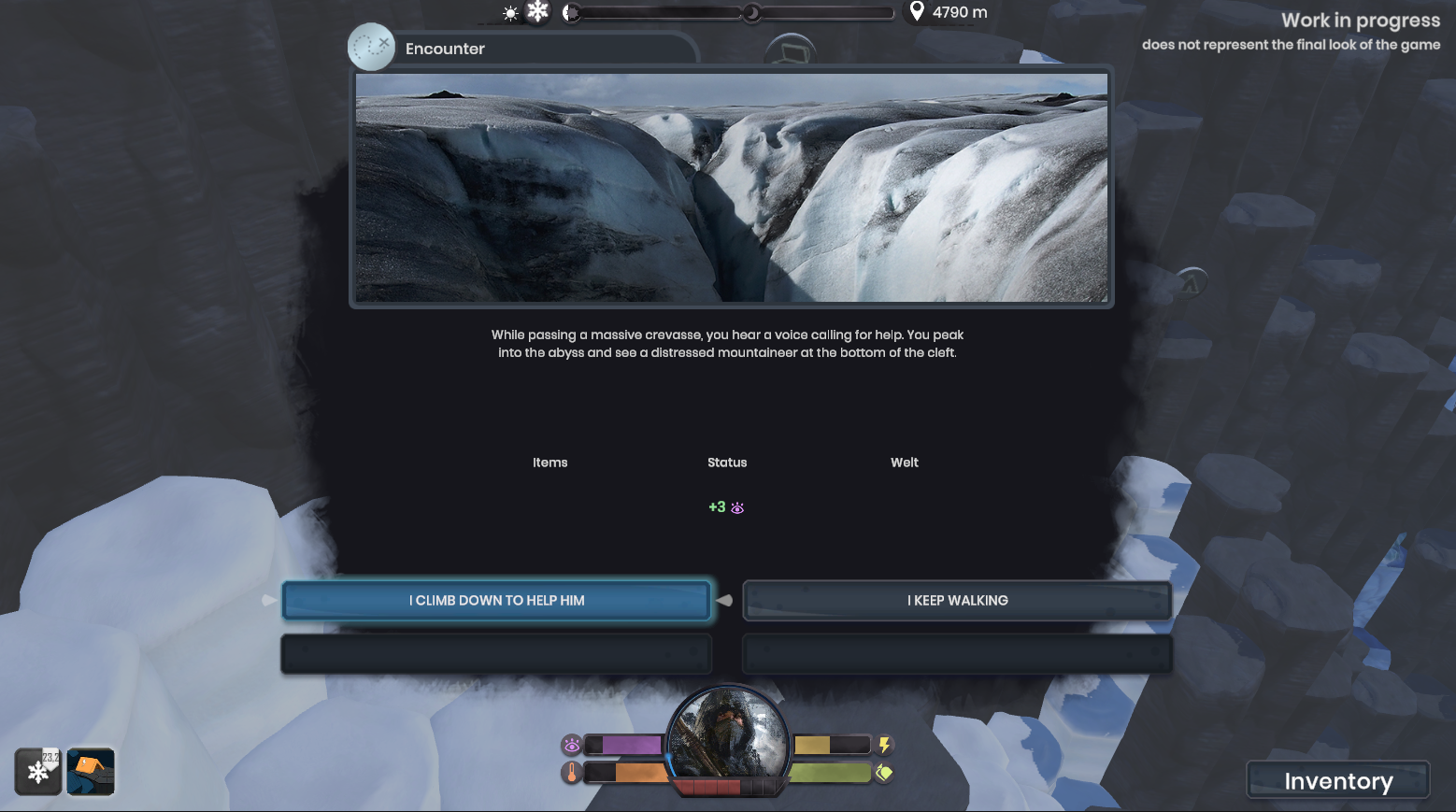 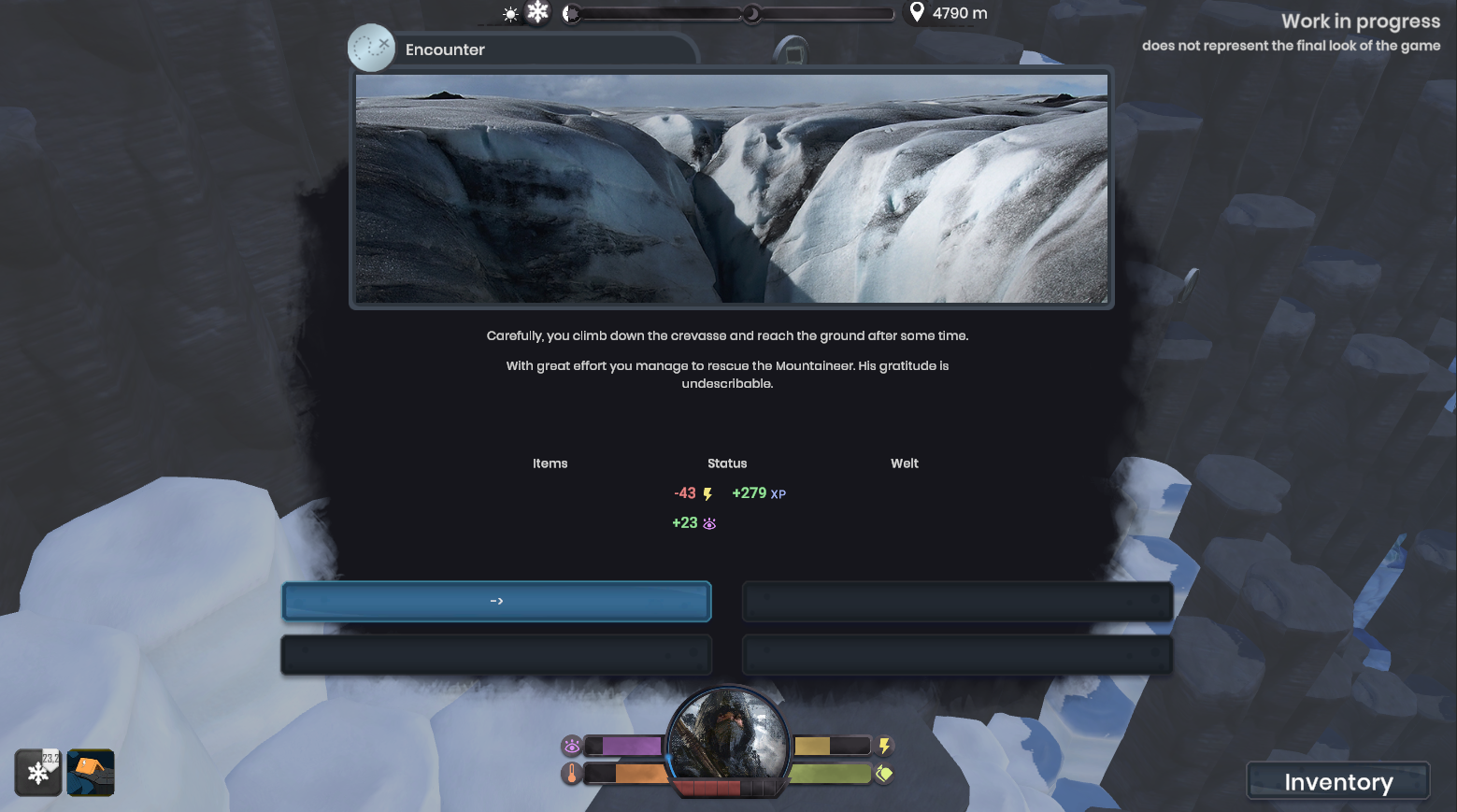 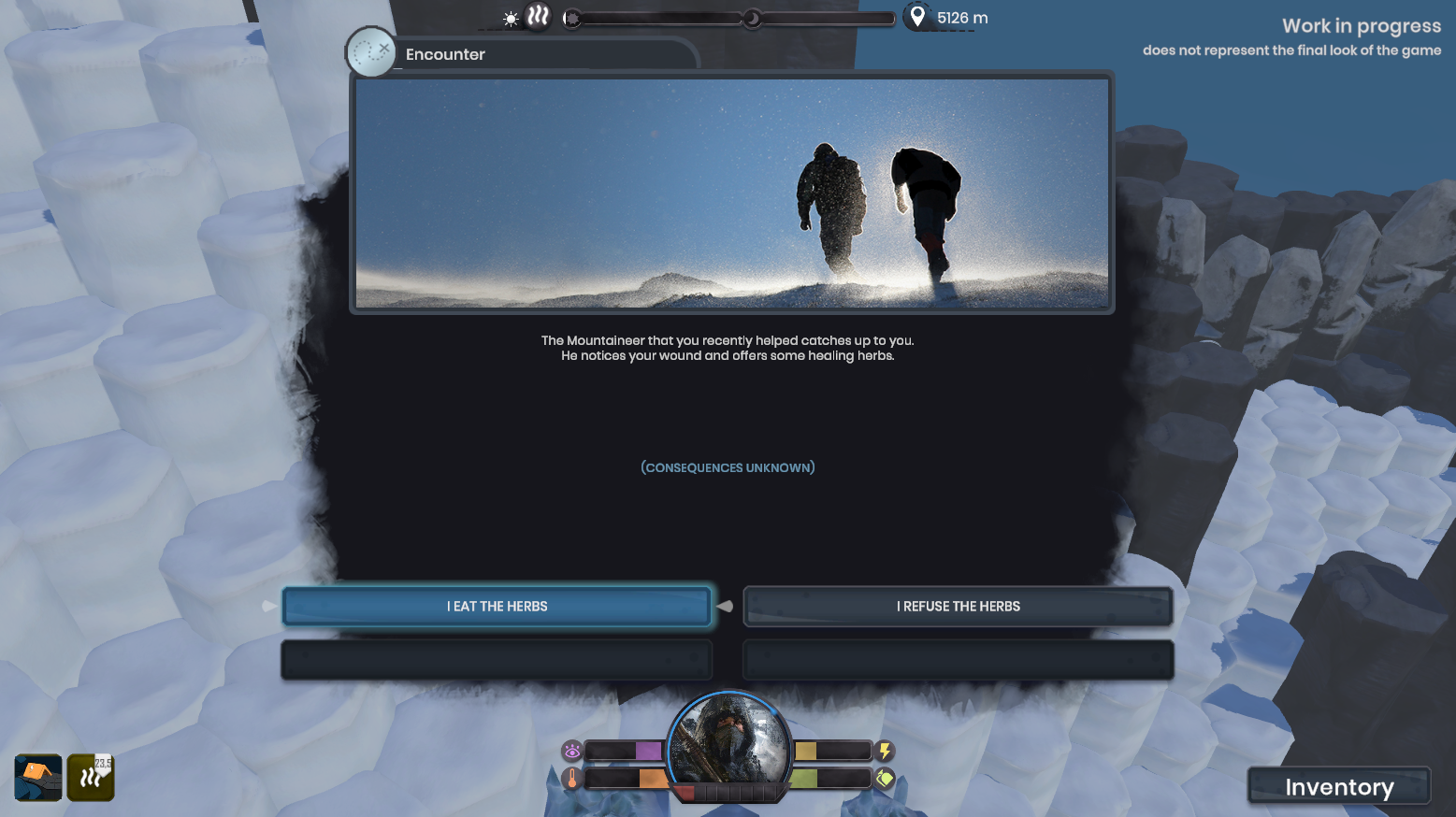 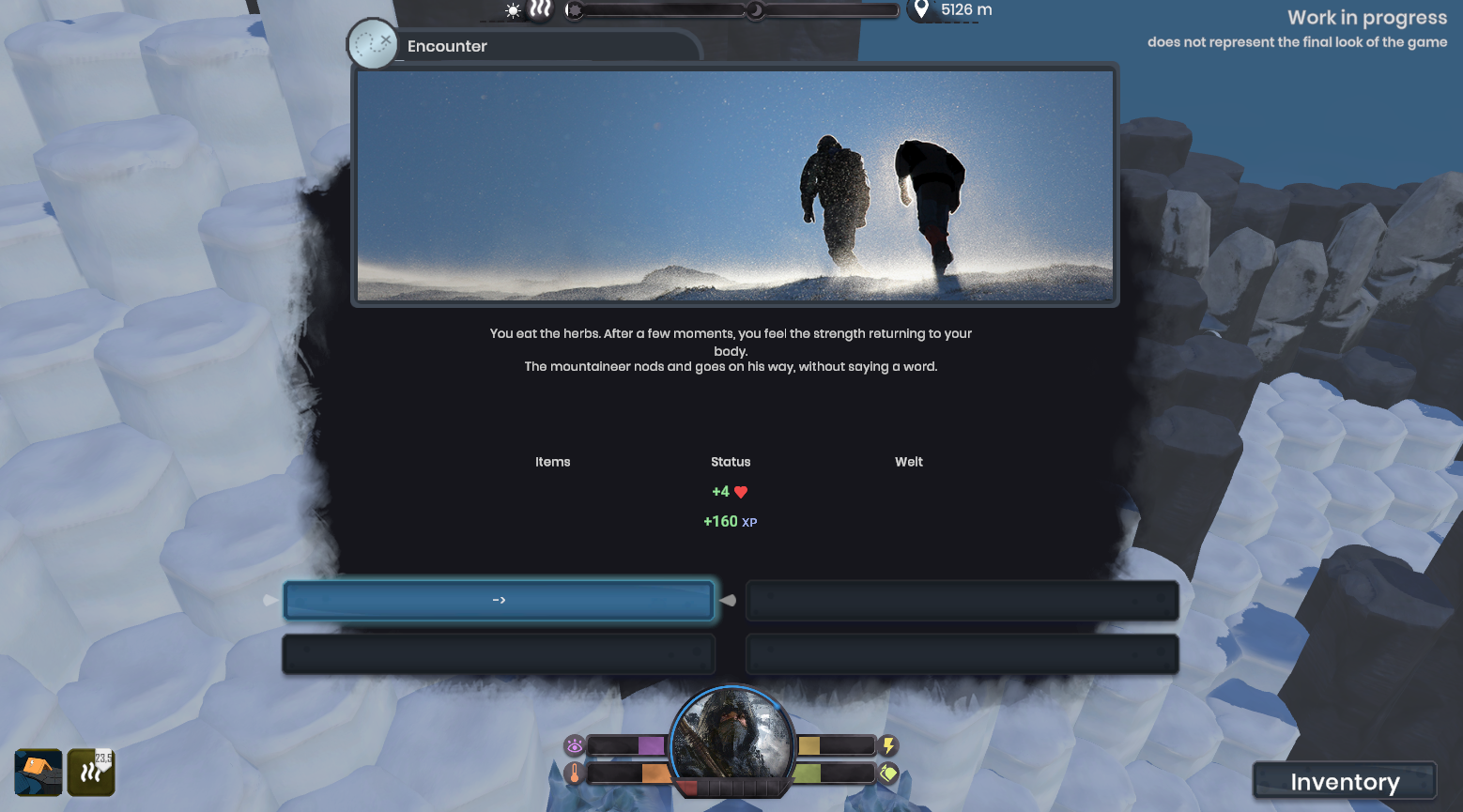 The difficulty in creating such events is to find the right mix between realistic and mystical, between straightforward and tricky and to figure out how to make engaging events with interesting choices, which put the player in a moral dilemma or don’t have clear “right” or “wrong” decisions, without making them super-complicated.

As time goes on we will eventually find the right solution.

Let's stay at the topic of events:

What a lot of you pointed out, was the possibility of events to have an impact on the actual overworld map of the game.

So i.e. in an event which triggers an avalanche you could not only lose energy and some health, but also change the look or arrangement of the hextiles around you.

We’re thinking about adding this, in the later future, but have to set up other things first, in order for that to work. Also, we have to decide what exactly the change of the map should look like.

Should there be animations for an avalanche that rearranges the hextiles or should that just happen while the player is reading the event textbox?

We definitely keep you up to date on how we approach this in following DevBlogs.

We didn’t change much on the visuals this time, but we still made up our minds on how and what we want to change on the visuals of the game to make it as appealing as possible.

We decided to implement more assets, that don't impact the actual gameplay, into the game such as trees, branches, small rocks, icicles, etc., to improve the overall look and make it more interesting and enjoyable.

We already designed this eagle. Even though we're still not sure if he's just going to be flying in the air for the visuals or if he's going to be a POI (event), we already love him <3 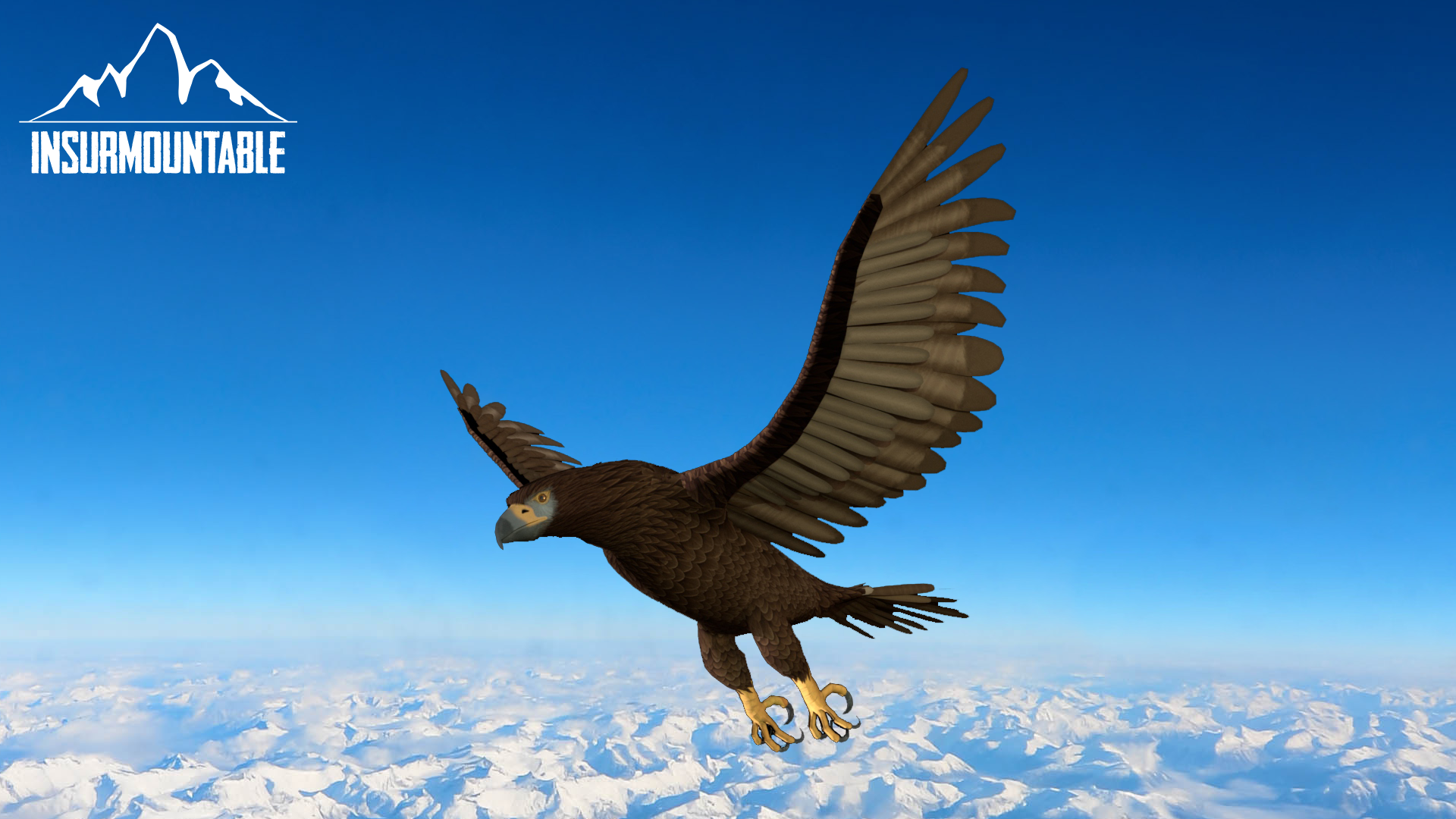 As seen in previous pictures and the Dreamhack version of the game, Encounter Events are displayed as floating “coins” that mark the hextile on which the event triggers. 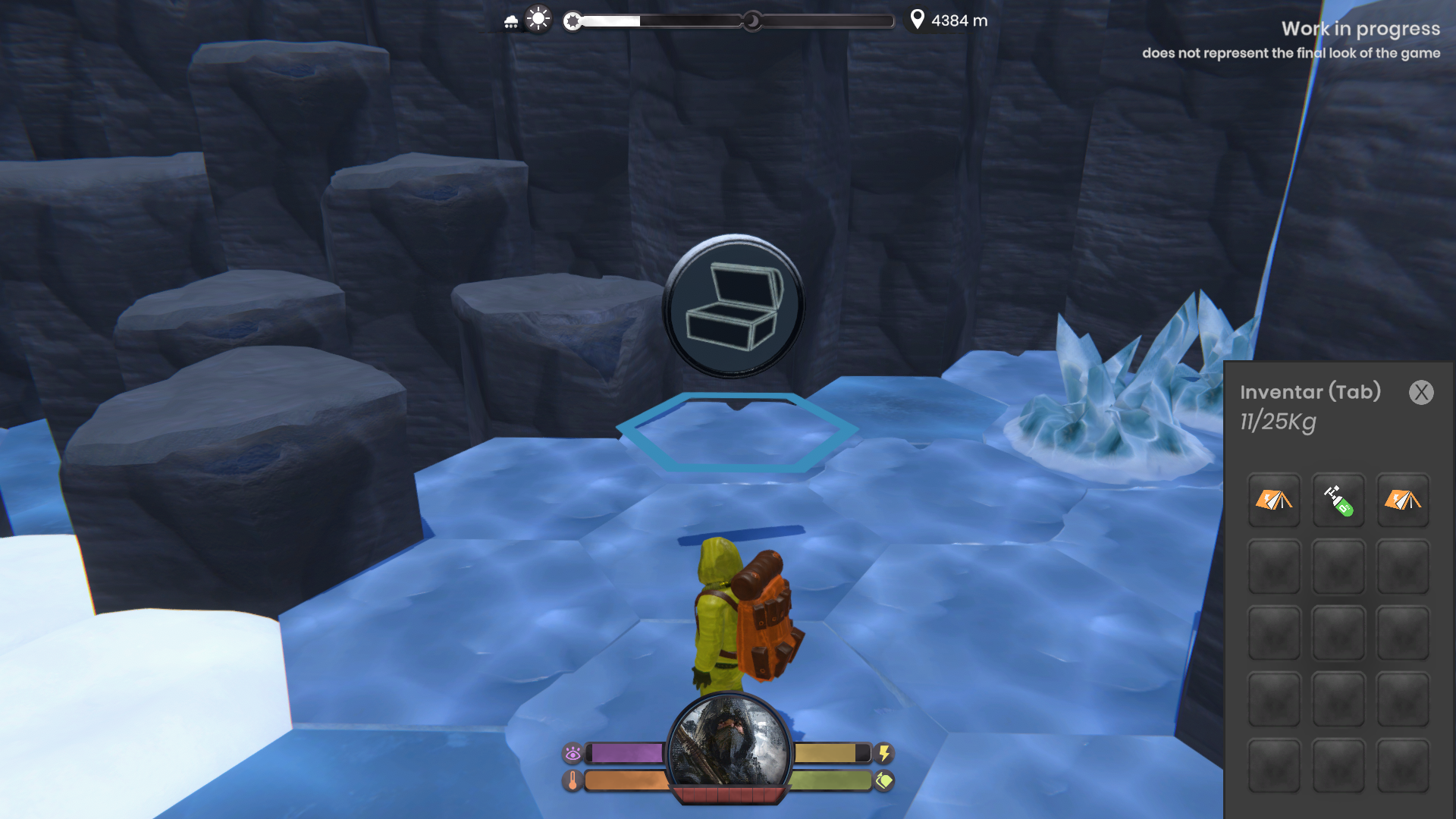 Do we wanna keep them? Are we putting embedded assets into the map instead, which would give the overall map more depth or are we going to do a combination of both to give the player more visual information?

We are still discussing this in the team, but gonna keep you up to date with that one as well.

Alrighty, that's it for all the bigger changes of the last two weeks.

In the next weeks we are putting more emphasis on the visuals of the game, especially adding in more decoration i.e. our big bird, trees and branches, but also updating the look of the hextiles. We also want to balance out the resources, to make every single one of them relevant in every playthrough.