Hey guys! Just some updates on a few things, mostly regarding internal development cycles. There's also a sneak peak about upcoming buildings changes and some awesome work from our programmers. Check it out!

Hey guys! We've been keeping our work somewhat low-tier because we don't want to distract anyone currently working on our other project, Reborn, but that doesn't mean we don't work at all. In fact, quite the opposite!
Workflow
Chronojam, always with game balance in mind, has gone ahead and wrote a tool that helps automate a lot of the annoying grunt-work associated with altering armor settings that govern weapon interactions against pretty much everything. Let me tell you, scrolling through a giant .ini file isn't very fun. I haven't had a chance to test it myself, but here's a WIP shot of the tool in use. 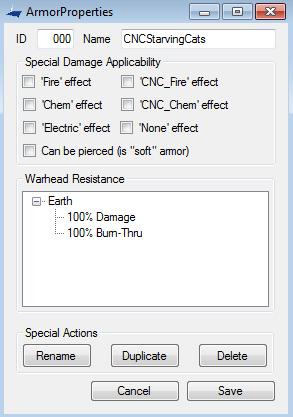 One thing ChopBam and I have been working on is converting a lot of our old gmax assets over to 3ds Max, which is much more stable and modern. Having two object editors is a giant pain, anyway. That being said, converting from gmax to 3ds Max isn't a straight process. At least, it wasn't, until now. Abjab over at RenegadeForums built a relatively decent W3D Importer for 3ds Max a few years back, but there were some serious flaws. I hear he's recently back at work with some Maya stuff, but I'm not 100% on the details. Anyway, ChopBam and I need a working importer for productive workflow. Enter our resident code-master, good ol' jonwil. He's torn down the importer and fixed a ton of things, mostly related to WWSkin, animation, and materials. Best of all, he fixed a deal-breaker bug where objects with the same material would have their UV entirely broken. Yeah, you can only imagine how infuriating that particular bug was. There are still a few animation bugs he's working to fix, but we'll let you know once he's done. It'll be included with the next release of our SDK, along with the awesome exporter work he's done.
On the subject of Workflow, jonwil is working on some changes to Leveledit that allow us to automate a lot of level-building and the like, and site-host Catalyst recently set us up with something interesting known as OwnCloud to automate our asset management. The jist of this all is that working on APB will be easier and cleaner than it has ever been. There are some more things we're doing too, but I'll leave those for another time.
We interrupt this program...
Saberhawk has a message for you:
"There is nothing wrong with your television set. Do not attempt to adjust the picture. We are controlling transmission. If we wish to make it louder, we will bring up the volume. If we wish to make it softer, we will tune it to a whisper. We will control the horizontal. We will control the vertical. We can roll the image, make it flutter. We can change the focus to a soft blur or sharpen it to crystal clarity. For the next hour, sit quietly and we will control all that you see and hear."

Scary. But don't worry, keep in mind that he's (primarily) our graphics programmer. What he really means to say is that our friends at Tiberian Technologies now have full control of the rendering/graphics engine. Nothing is set in stone quite yet, but I'm sure your imagination can run wild with this. The possibilities are immense. Have fun with that thought. 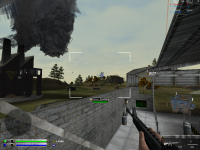 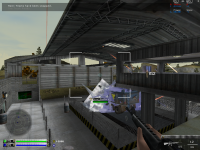 Many polygons sacrificed themselves to make this possible.

Gameplay
Now, I'm not one to ever really discuss gameplay, but I really should mention something. We've had ample time to observe the effects of Tech Levels now, which were introduced with Gamma. I'll let the boss talk about this when he gets the chance, but we have some interesting alternatives and fixes for the system in discussion right now. Different modes, different tech requirements, and all sorts of ideas are floating about.
On the subject of gameplay, Chronojam has been theorizing a new Soviet barracks that will switch gameplay up a bit. From what I can gather, it'll more-or-less be a proof-of-concept for building changes in future versions. I'll let him show off his stuff next time he gets around to writing one of these. It's pretty exciting stuff for sure. We actually have quite a lot of building stuff in the works, but we're not quite finished yet so we'll hold that off for a week or two. ChopBam will be around to fill you in on the details next week. It's pretty neat stuff, be sure to look for his report. In the meantime, he's provided these two images that you can tear apart. Happy hunting. 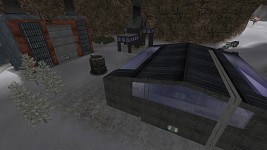 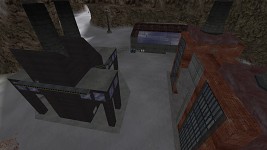 Yours Truly
Finally, I'll talk about what I've been working on. When I'm not juggling summer school or new apartment/old roommate fiascos (ask me about my roommate going to prison!), I'm still doing some work here. Mostly, it's still vehicle and general rigging cleanup, on top of some theoretical code work/discussion with the TT guys. There are all sorts of inconsistencies between the different riggers (me, Spice, Eggman, etc) that can cause problems, so I rectify these and make our vehicles as consistent and functional as possible. I actually had to format my computer recently due to some broken .NET assemblies and lost my source for the fixes I did a few blogs ago. Needless to say, I was pretty pissed at myself for not backing them up. Good thing jonwil fixed that cruddy importer!

Soon I will start fixing up our foliage database, mostly in regard to Level-of-detail (LOD) and maybe some animation to liven things up a bit. This'll make things look and perform better, so it's definitely worth doing. It's a big job and as always I'll be collaborating with ChopBam to get this done.
That being said, are there any outstanding vehicle issues that you'd like me to take a look at? If it's feasible, I'll gladly look into it. Just hop on over to our Bug Tracker and drop a report for it. I'd like to say that, internally, the bug tracker has been a massive success so far. We check it often and look forward to easy categorization of bugs and versions. I wish you could see how incredibly it has worked out for Reborn. Actually, given how functional it is for us internally, it might just be that you don't actually get to use it at all.

Also, just a head's up, the server might appear unavailable for a short time, we're upgrading the back end stuff in anticipation of the pending release of another project. The new backend won't be fully compatible with the existing launcher that APB 2.1 ships with. Sorry for the inconvenience!