The character design process can be really complicate and is one of the most important elements of game design in a conceptual meaning.

I’m tired of games about a man saving the world, I think the stories and mechanics can be about any more that only the hero’s journey. Yeah, I enjoy with nice mechanics and defeating enemies, but if we understand the game as an art, and so I see it, we should explore all the ways that we can imagine about how a game CAN to be (instead of how a game HAS to be).

Shopping Day emerged in my mind because it represents some of my worries and interest, I wanted to talk through my game about the problems of some people, those for which to go shopping can to be a real problem. The capitalist society has turned the shopping activity in one of their fundamentals, It has to be funny and is one of the basis of social interactions in the capitalist society. American films and american culture in general tend to show us go shopping in a ideal way, and games about shopping are not an exception. The shopping games tend to show this idealistic vision about shopping, some of this games, based in creations for the children public, like Barbie or Frozen games, specially directed to female target, are creating potential future brainless consumerists, submissive, expendable pawns of the consumer society. These games show a fake vision about happiness, fun and social relationships. 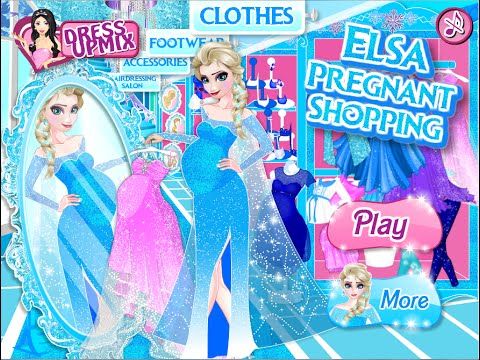 Elsa Pregnant Shopping: not only is a "real capitalist woman" because she is shopping, she is also pregnant

Since the first moments that Shopping Day game idea was in my head, the main character was one of the first things about I worked. She (yet without a name) is the representation of all those worries and interest that I talked before and those about I want to talk with my game.

I have experienced in first person some of the problems of the shopping culture, problems generated by capitalism. As a overweight person I suffer when I have to buy clothes, as a person without to much money I feel excluded by the consumerist society in we live in… But a lot of the problems of the shopping culture are especially focused in women, social pressure about how women has to be, how they have to be so pretty, so slim, to dress with nice clothes, to accept without complaints. Definitely, the shopping culture is full of sexism. Sexism is one thing about I am worried and this game offers to me a opportunity to talk about this. I understand the game design like a way to show my artistic expression about my interests, and the social problems are one of them.

Shopping Day needed a woman as the main character. But not only that, with the objective of tell the complete story she had to be a non-normative woman, according to the strict rules of the capitalism: not a pretty woman, not a slim woman, not a woman that dress with nice clothes, not a woman that accept without complaints… But really she is not ugly or rude, she is only out of the strict canon that capitalism demands for to be a “real woman”, as is named the clothing shop of Shopping Day. 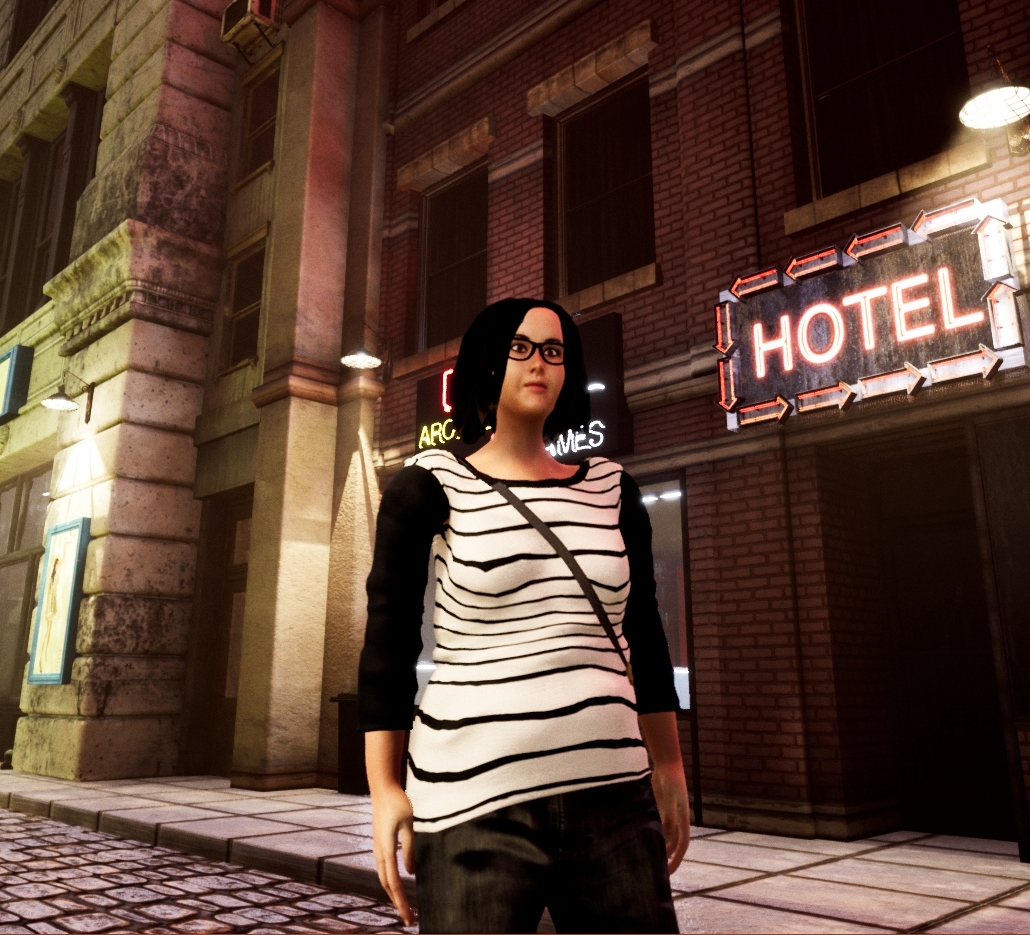 But not only all of that, I want to create a game for the people that usually don't feel represented in games. People like me, not a hero, not a handsome person, just a normal person in a normal and hard day.

By another side, I know, she is not ugly and she has only a bit of overweight, in fact she is a very normative-non-normative character. But in any way yet is necessary to make a character in wich the people in general can feel identified, in this case the non-normative people is covered by this identification and, in fact, is the main target. To create a really ugly character would not suppose a change in the game narrative. As usually, less is more.

I think is also interesting to talk about the technical process of the character's creation. I’m not an expert in character design and human modelling, until now I have always used the Mixamo (Adobe) Fuse tool for the characters creation, this is the case of the first design of the Shopping Day’s main character. But the results with Mixamo Fuse wasn't exactly what I was looking for, especially about how this tools treat the overweight, because yes, in general this tools are especially focused for the creation of normative characters. Mixamo Fuse only offer or “fit” or “stocky” females, first are really thin even on maximum sizes, second has a too morbid overweight and deformed aspect. 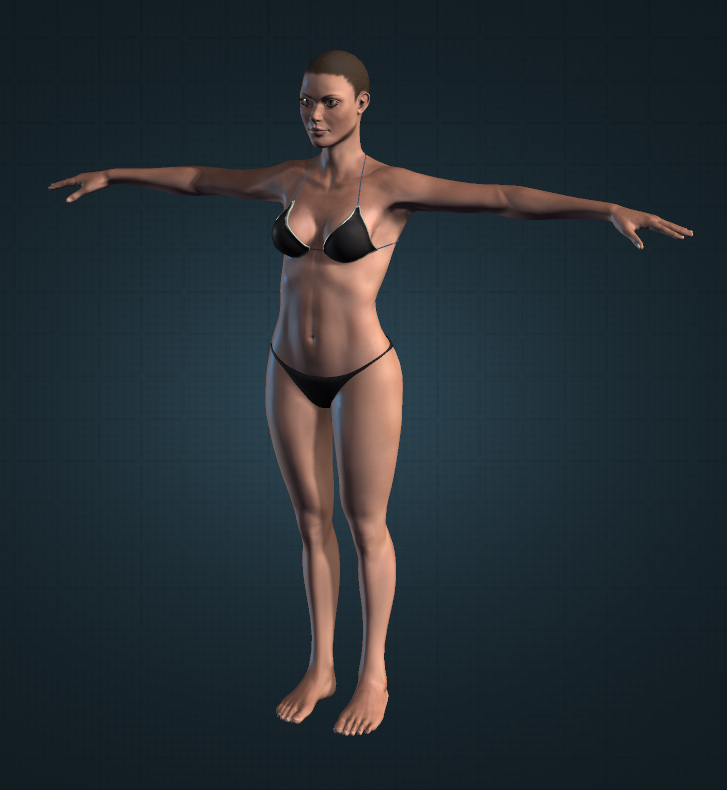 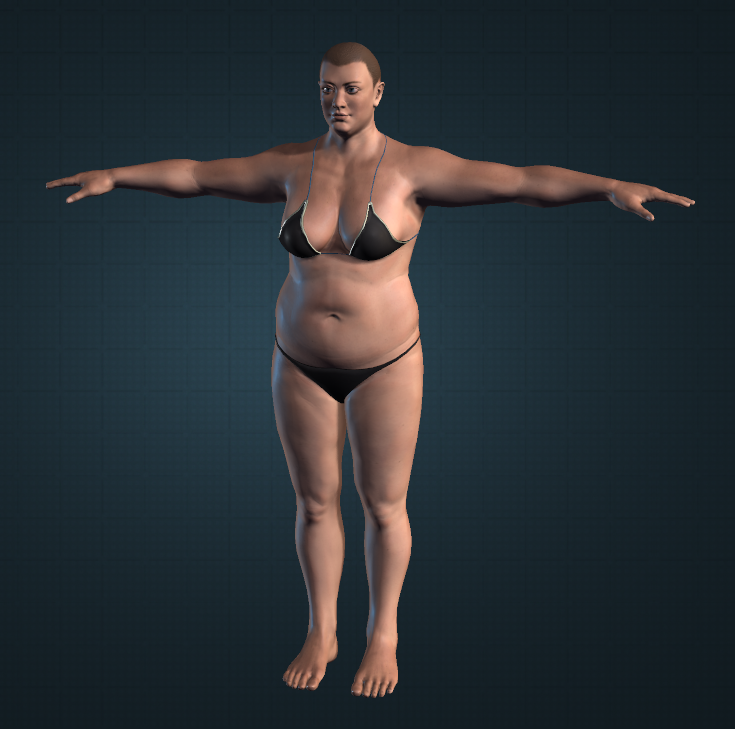 I have been looking for an alternative free tool to Mixamo Fuse. Finally I have used Makehuman, a tool with a weird initial aspect but with an enormous potential with the enough work, and especially useful if we add the community's free content. 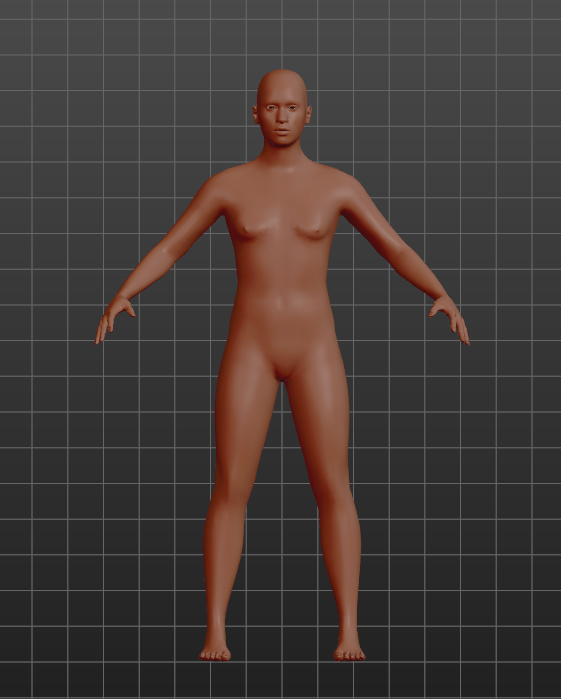 The initial model of Makehuman is really horrific 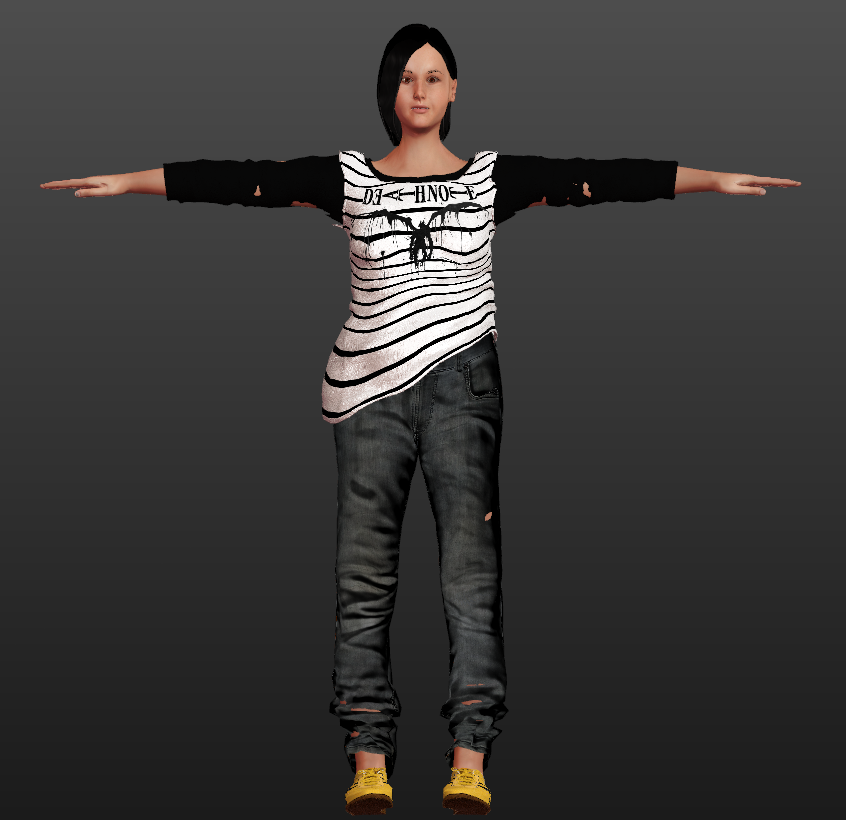 A bit of work and, voilà!

The part that I hate more about creating a character is the hair, because its difficulty and the existence of different ways to make it. There is no any hair that really I like in free community content of Makehuman, so I created a completely new hair with Blender and their bezier curves (thanks to CG Cookie youtube channel and his cool tutorial). First I created the basic mesh, when it was complete I used booleans to merge the different hair parts and finally I used sculpt tool for giving a more realistic aspect to the hair.

Then I modified with Blender some of the clothes that I added of the Makehuman’s community content and I added and modified another accessories as the glasses or the bag, taken from the Sketchfab free CC content. 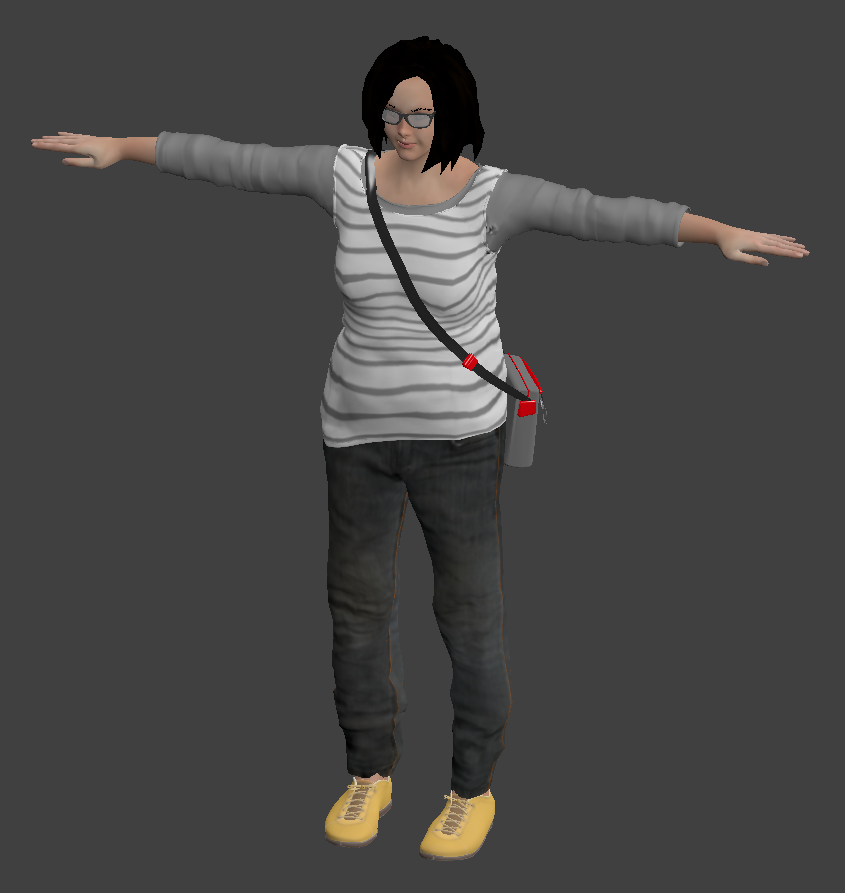 One last thing was to add the animations, for this purpose I used the Mixamo animations libraries. This is a really easy to use content with very professional results and is a very interesting way to save time and work for a small project. I don’t recommend this tool for most professional works because the animations are a nice way to show the personality of the characters and Mixamo animations are nice, but with low options of changes and is really complicated to modified in a exterior tool like for example Blender.

There is yet any details that I want to modify in the main character, is yet a work in progress. It has some textures that I want to improve and some changes that to apply in the final design. Perhaps from here to the end of development I will change again the complete design. Who knows, the work of the game developer is a continuous until the end of the development.