In which the tutorial is reworked; the background to combat is touched-up aesthetically; the new enemy sees work; and a bug in the effect of stamina is fixed.

This week, in place of a screenshot we have a short video: a look at changes made to the game's tutorial!

With the aesthetic changes pretty much done (for now, at least!), I moved on to other matters for much of the week just past. In particular, to reworking the tutorial, and to continued work on the new enemy:

The tutorial in A Door to the Mists is a feature that has been critiqued since the release of the demos. There's a fair bit of text to it, and text that's easy to simply ignore, potentially leaving the player stuck at a later point. The combat tutorial also repeatedly stops play, interrupting the flow of the combat.

Furthermore, I've never been quite happy with just how much the very first tutorial dumps on the player.

Now, some of this I currently see little alternative to.

For one, I really don't know how else to convey the combat mechanic: if I don't stop play, then the player has a limited amount of time in which to read and digest the given information before being required to use it.

On top of that, I'm not willing to assume that all players have significant experience with games such as this. What's more, some features--primarily the universal climbing and the combat mechanic--seem to me sufficiently unusual that they call for explicit teaching, even to experienced gamers.

(And indeed, these two Twitter posts (one related to the other) that I recently happened upon only reinforce my feeling that I shouldn't assume universal gaming literacy:
Twitter.com
Twitter.com )

Still, in the week just past then I set out to improve the tutorial somewhat.

Some of this simply took the form of rewriting the text, and in the case of the combat health- and stamina- tutorials, of consolidating it. Hopefully the tutorials so edited should now better convey what they're intended to teach.

However, I also reworked the fundamentals of the pre-combat section of the tutorial.

The very first tutorial now teaches only the barest basics: movement, looking around, running, and opening the in-game menu.

Interaction, then, is now taught separately. And since there are multiple potential locations at which the player can first interact--the pushable stone at the back, the rock atop the pyramid, and the buttons in the first pyramid chamber--this tutorial is now available at all of them. Of course, I don't want players to be bothered by a tutorial that they've completed, so interacting in any of those places completes all of the interaction tutorials.

This also has the advantage that should the player ignore an earlier interaction tutorial, they'll at least get it again when they are required to interact in order to proceed. 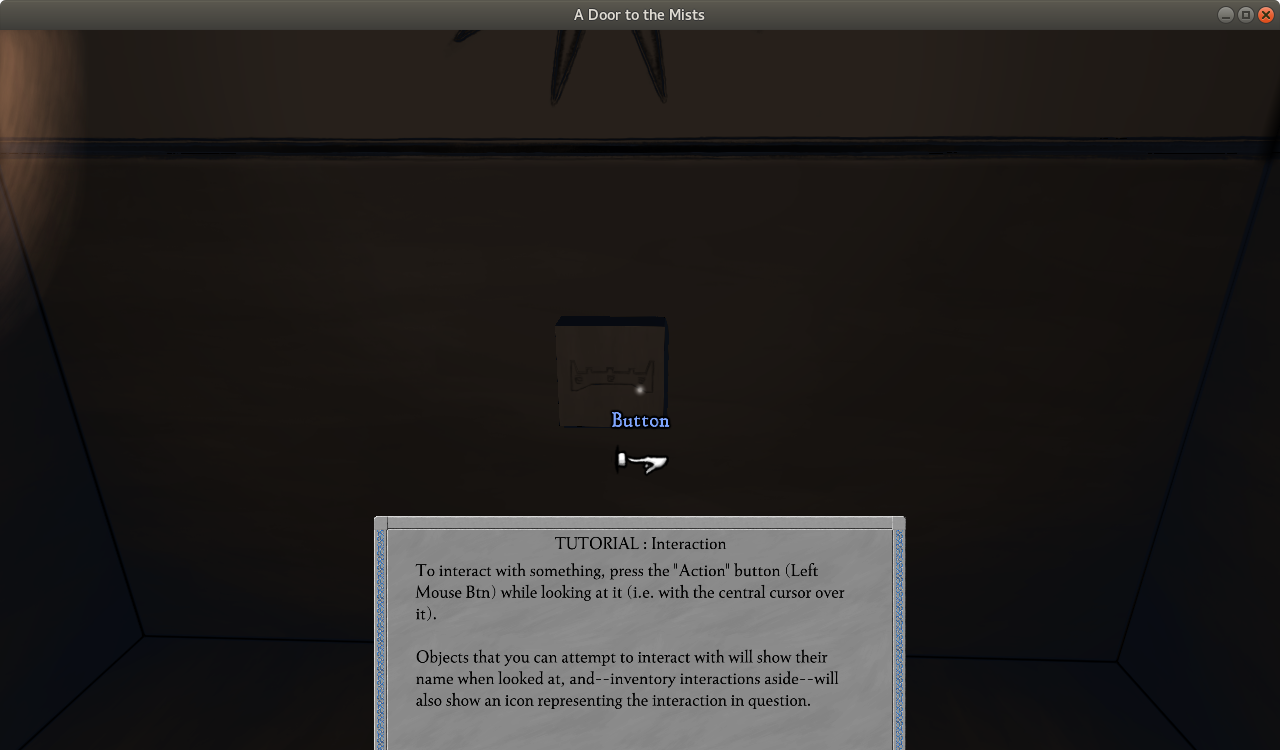 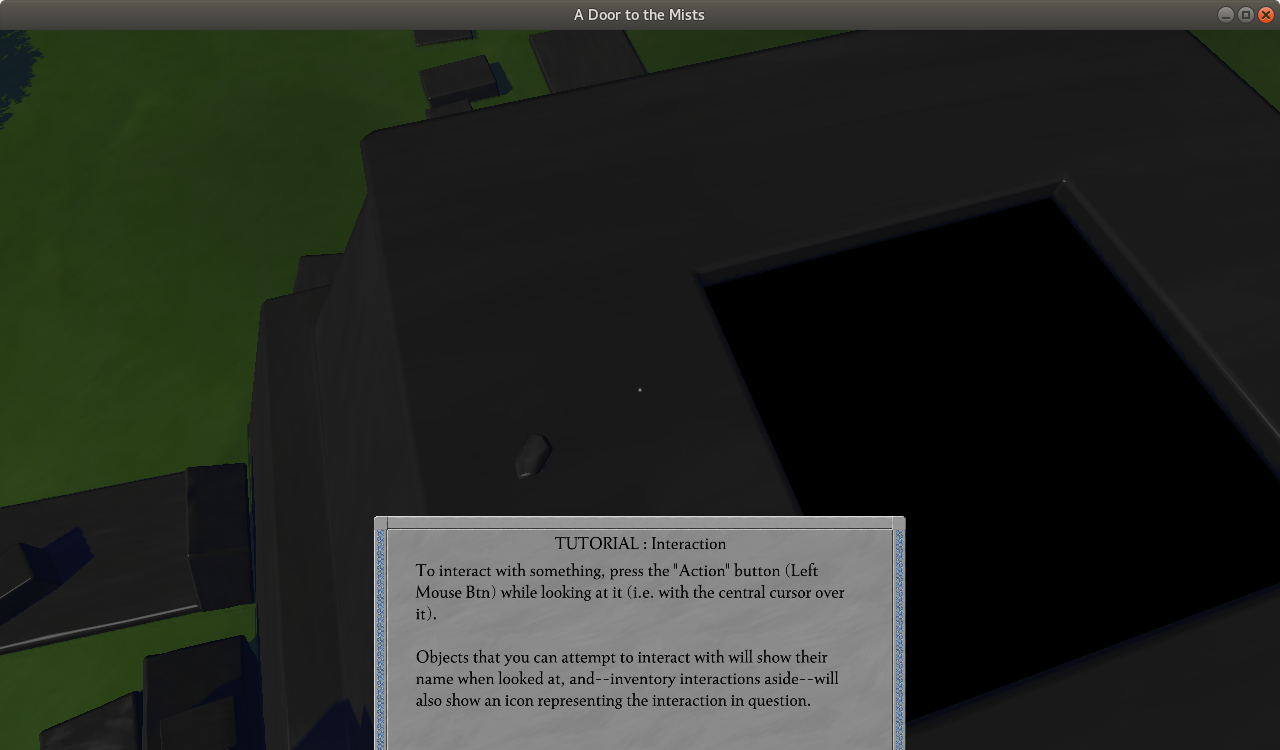 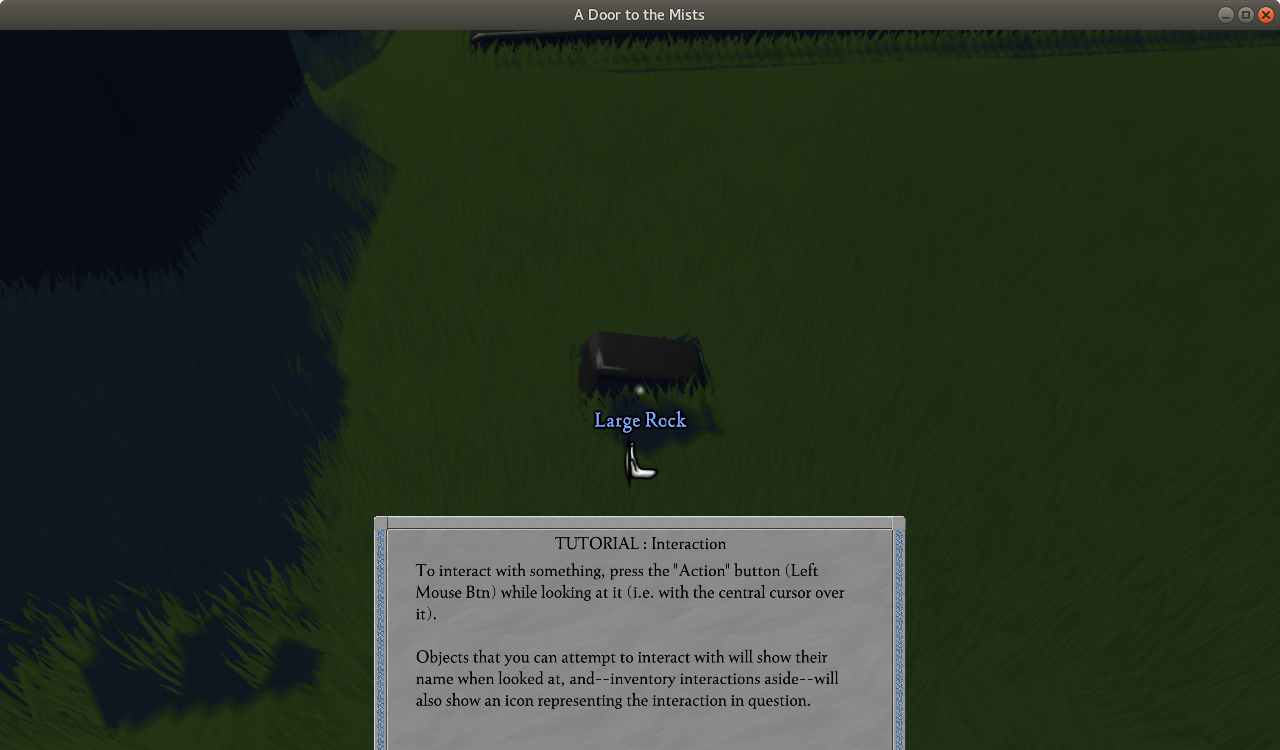 You may recall that the rock atop the pyramid was an inventory item, and was used to teach about the inventory--which might clash with using it to teach about basic interaction.

To that end, said rock is no longer an inventory item: the player simply uses it, which causes it to be dropped into the darkness of the pyramid.

The inventory tutorial is then handled inside the pyramid, at the point at which the player is required to use an item to continue on. 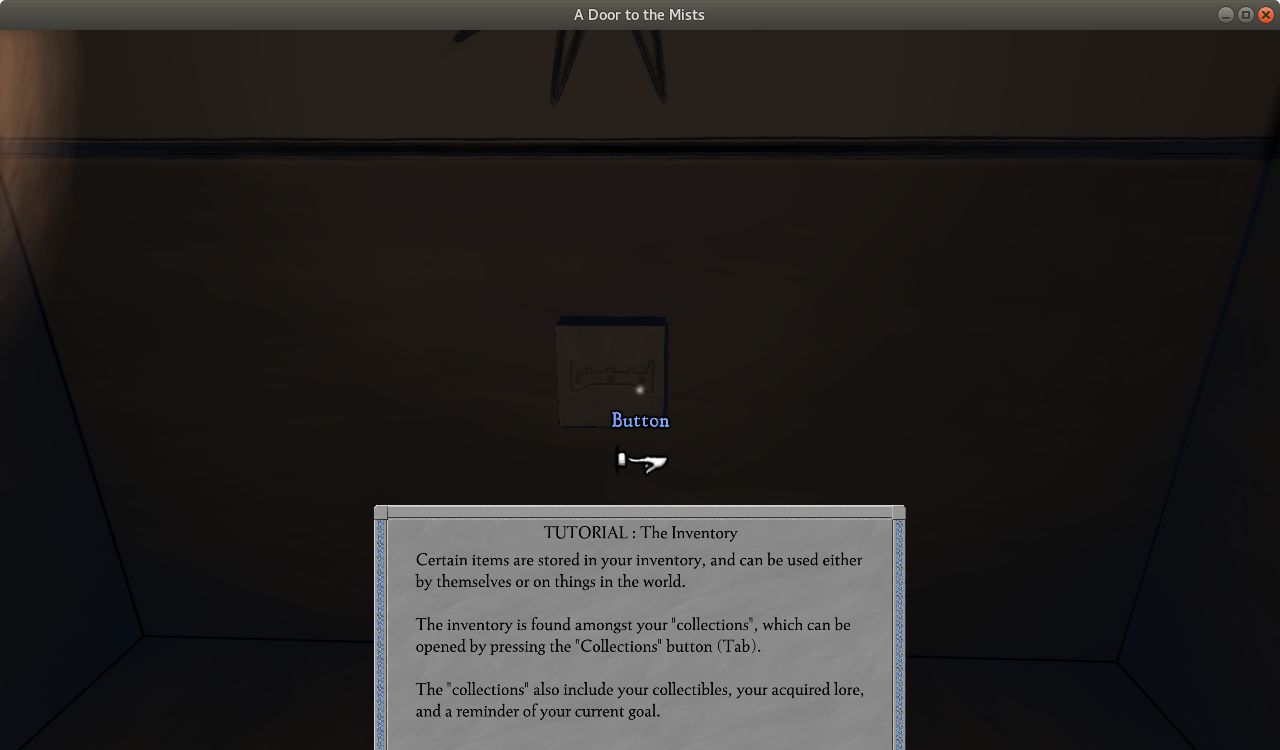 Overall, I think that I'm happier with this arrangement! It does mean that the first pyramid chamber can end up with a pile of three tutorials one after the other--examination, interaction, and inventory--but hopefully most players will act on one of the other interaction tutorials, forestalling it appearing here.

And finally, I further added a little sound-cue to the tutorials. This helps in particular (I hope) to distinguish between tutorials that appear in quick succession, but also (I think) just makes them feel a bit more engaging.

(The sound used for this, by the way, was originally made for my "GDC Relief Jam" entry. ^_^)

Aside from the tutorial, I did some work in the combat mechanic in the week just past.

First and simplest, I've made some aesthetic changes to the background of combat: it's now a little less dark. This should hopefully make it easier to see both the player-character and the enemy--especially in the case of a particularly dark enemy that I have planned for later. 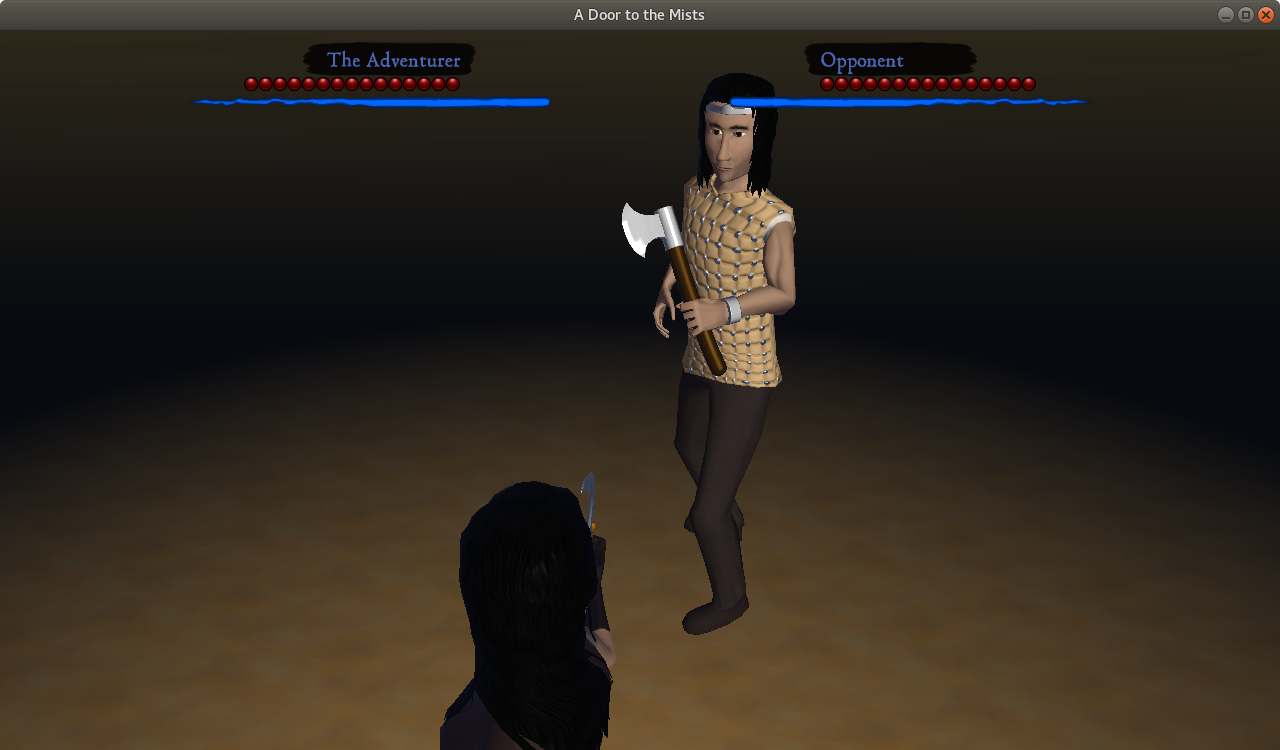 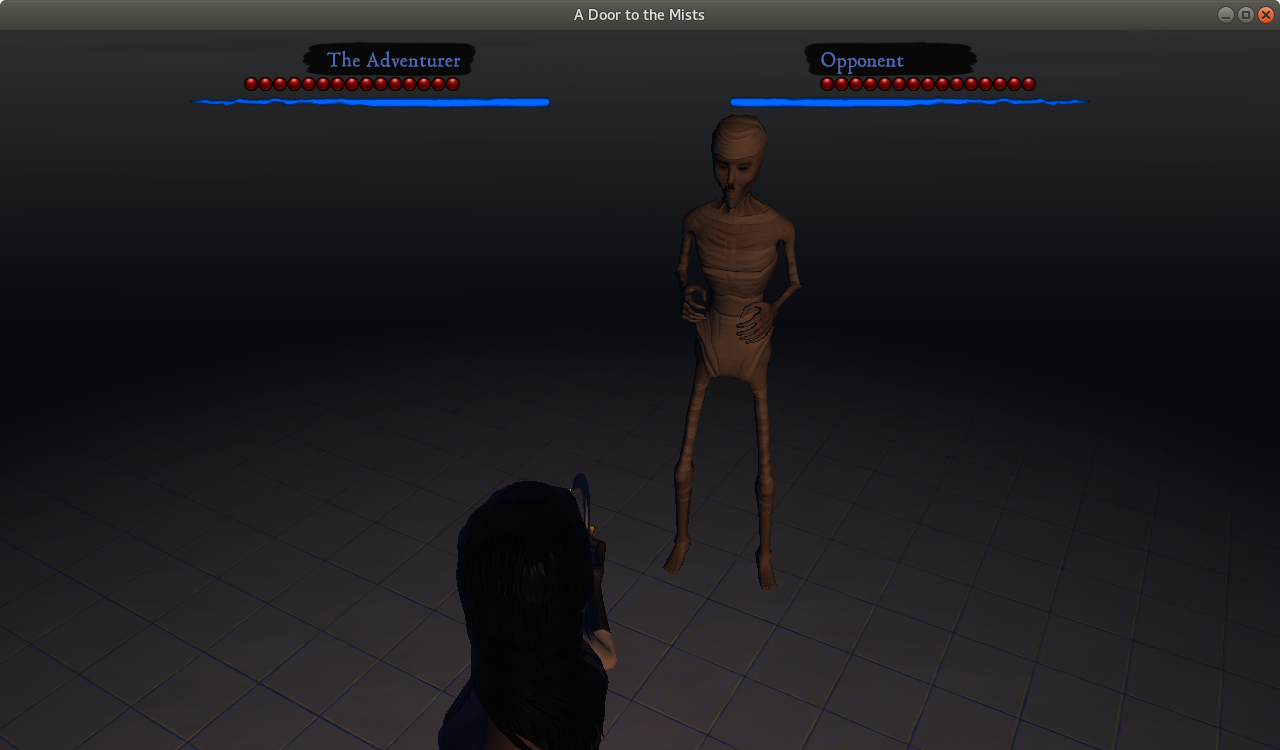 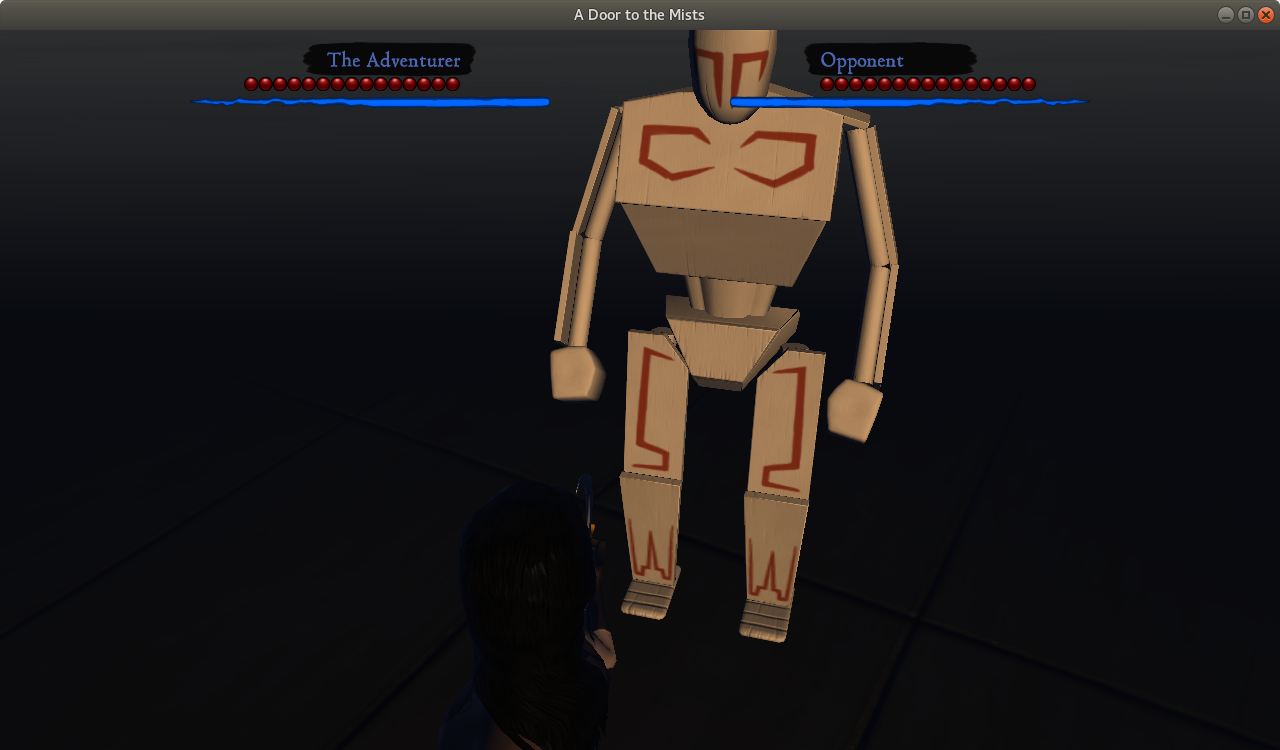 And sticking with combat, I put in some work on the most recent enemy: For one, I've started to make the audio for the fight (although I'm not yet sure that I'm happy with what I've made). And for another, I made various touch-ups to the character's model and animations (in particular, incorporating mouth- and eyelid- movements as seemed appropriate).

I also uncovered and fixed a minor bug in the stamina system: it seems that damage reduction wasn't kicking in until stamina was pretty much zero, allowing combatants to deal full damage even at very low stamina-levels!

And along the way I made various other changes that don't seem worth detailing here!