I know it's been a while since I've posted an update on Pulsar, but that's not because I've been idle. I've been heads down working hard to bring you a high quality indie game. After making a ton of progress I thought it was time to bring you a new update. I've spent a lot of time previously talking about Domination, but this time I want to focus on Demolition, sometimes called Base Hunt. Please join me as I walk you through some of the latest and exciting updates on Pulsar.

Hi everyone,I know it's been a while since I've posted an update on Pulsar, but that's not because I've been idle. To the contrary I've been heads down working hard to bring you a top notch, high quality indie game. After making a ton of progress I thought it was time to bring you a new update on how things are progressing. I've spent a lot of time previously talking about Domination, but this time I want to focus on Demolition, sometimes called Base Hunt.

Demolition is a lot like Domination, but without having to worry about mining or leveling up. Instead, the team starts at level 10, with all potential inventory items available for upgrade. Each team member can customize their load-out to fit their personal play style. However, each player is only awarded 100 points to spend. With that they can choose any combination of items to build their perfect ship. As you play you can earn additional points for kills, survival, and wins.

Games can be from 1-4 teams balanced for a max of 60 human players and AI, and some enemy pirates thrown in for fun. Each team starts with a single base they need to protect. Their base is protected by 4 capital ships, each emanating a powerful shield generator surrounding the base. In order for a team to take out an opposing base they first must destroy each capital ships. However, capital ships are heavily armored and fortified and don't go down easy. Furthermore, teams can leave as many players behind to protect the base and fight off enemy attacks.

Here we have a screen shot of a protected base. 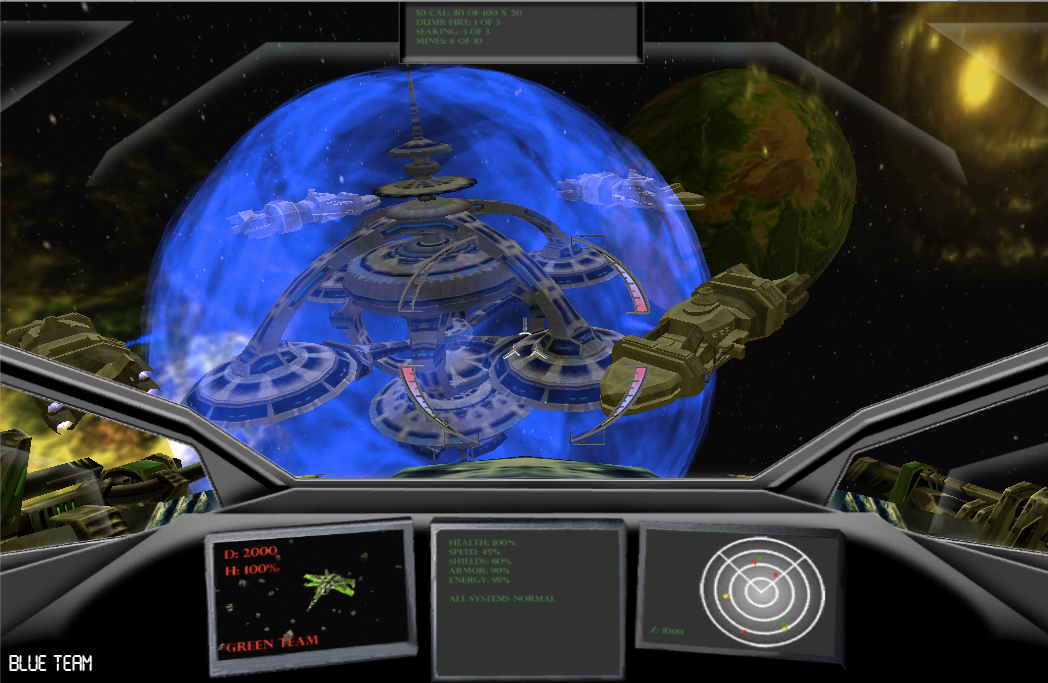 The force fields are impenetrable and flying into them is deadly for an opposing ship. However, same team ships have free fly through the shields as their onboard systems broadcast a frequency that provides them safe passage through the shield.

In this screenshot you'll notice the HUD has changed a little. The monitors at the bottom of the HUD are still just placeholders and will be updated with pertinent information before the final release. The plan as of now is that the left monitor will show information about any enemy ships you are targeting. The right monitor will show a radar of what's happening around you and the center monitor will show various status updates about your ship and team progress. Also, at the very top is another display that will show information about current weapons load-outs. I'm a one man creative and development team and I could really use some art expertise. If anyone is a fan of the genre and strong at art (unity particles is a plus), I'd love to hear from you. I'm hoping to try a kickstarter campaign soon to help cover the costs of the polish. I really want the game to look great, and now that most of the game play is done, having the right polish should help it stand out as a top notch indie title I hope.

New to this version of Pulsar I have added fully automated turrets on the capital ships. There are several different types of weapons that are randomly spread all around the ships. In this screen shot we see 3 cannons on the side of one of the capital ships. 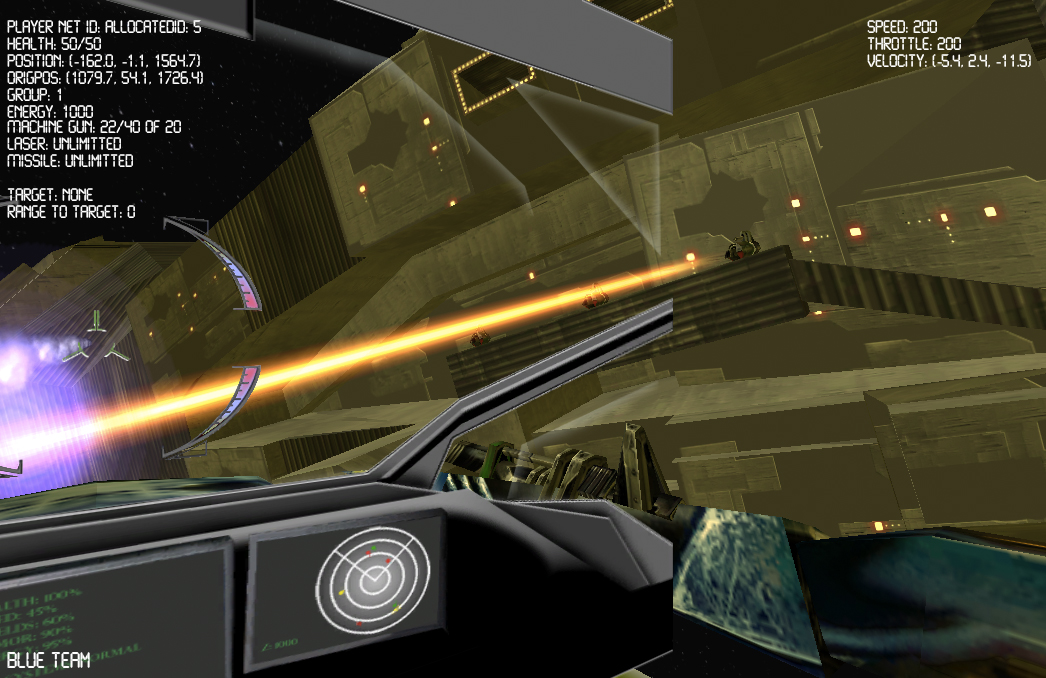 We see a beam weapon being used about to cut down our fighter, unless we do something to quickly avoid it's death ray. In this screen shot we also see the pilot has his head turned to the right, allowing him a clearer view of what's around him. 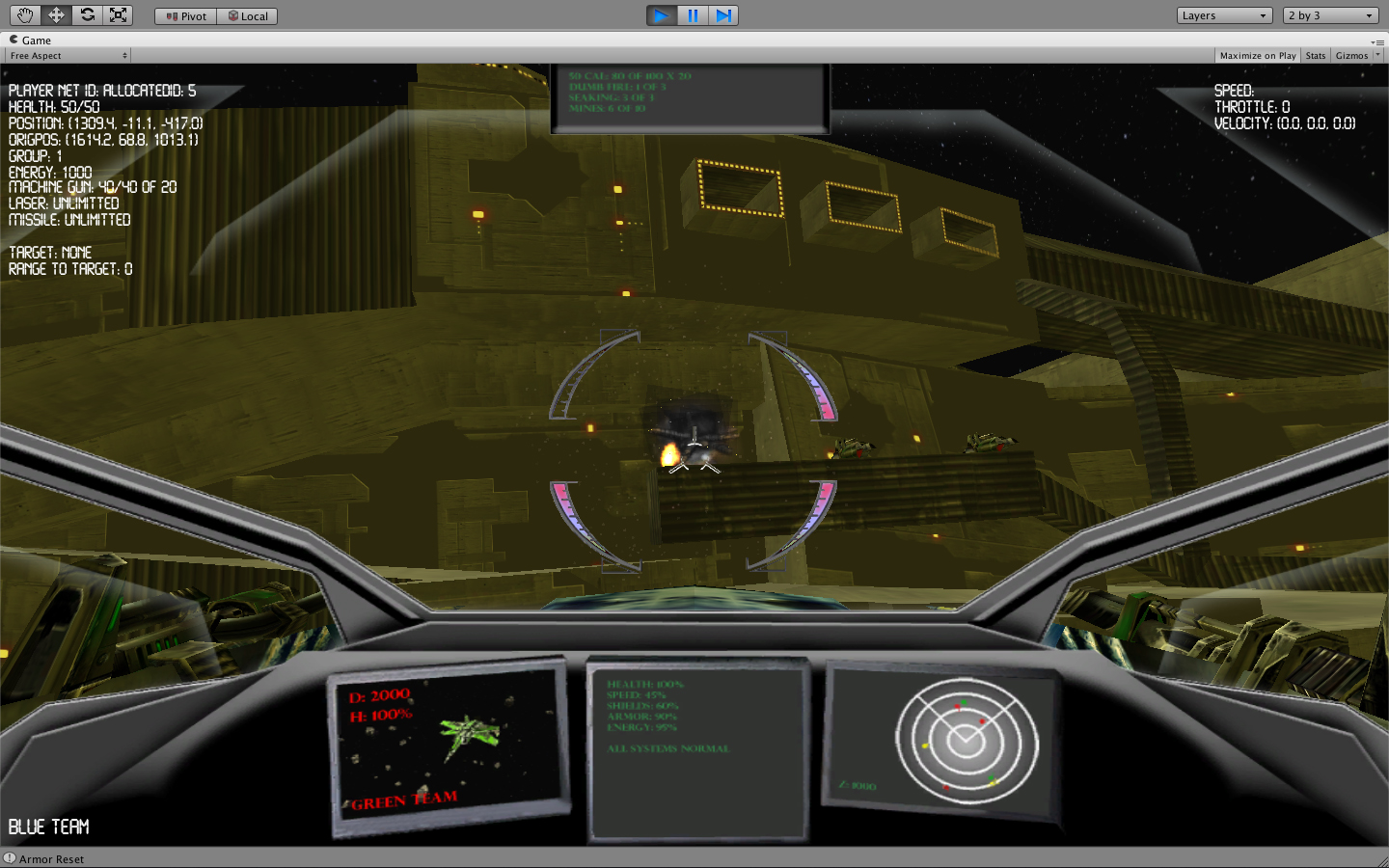 Blowing Up An Individual Turret

As with any good space combat sim, it wouldn't be complete if we couldn't take out the individual turrets now, would it. Here we can see one of the turrets beings destroyed. However, even if you completely knock out all the weapons, you'll still need to take out the ship itself to shutdown the shield generator and expose the base.

You might be wondering why I'm talking about Demolition so much now. Well, in short the game mechanics are just about done, and now I'm focusing on the polish as best I can to get it ready for showing. Because Demolition and Domination require 90% the same code with the difference being that Domination also needs all the resource management, it turns out I'm able to complete Demolition first as everything it does is required for Domination too. Since it's almost done, I actually have a fully playable game at this point. It still needs a lot of polish, and is far from done, as I still need to update all the inventory, fine tune the balance of power across the inventory items and many more tweaks, but the beauty is, it's done enough to consider creating an alpha release in the near future. I'm really excited about all the progress and I hope you are too.

I have a ton more to share, getting into details about the various inventory items, and how to blend different choices into unique playing styles. I think I'll save some of those details for my next post, so stay tuned, tell your friends about it, and let me know what you think. I'd love to hear your feedback to make Pulsar the best Team based Space Combat game from a humble little indie game studio. 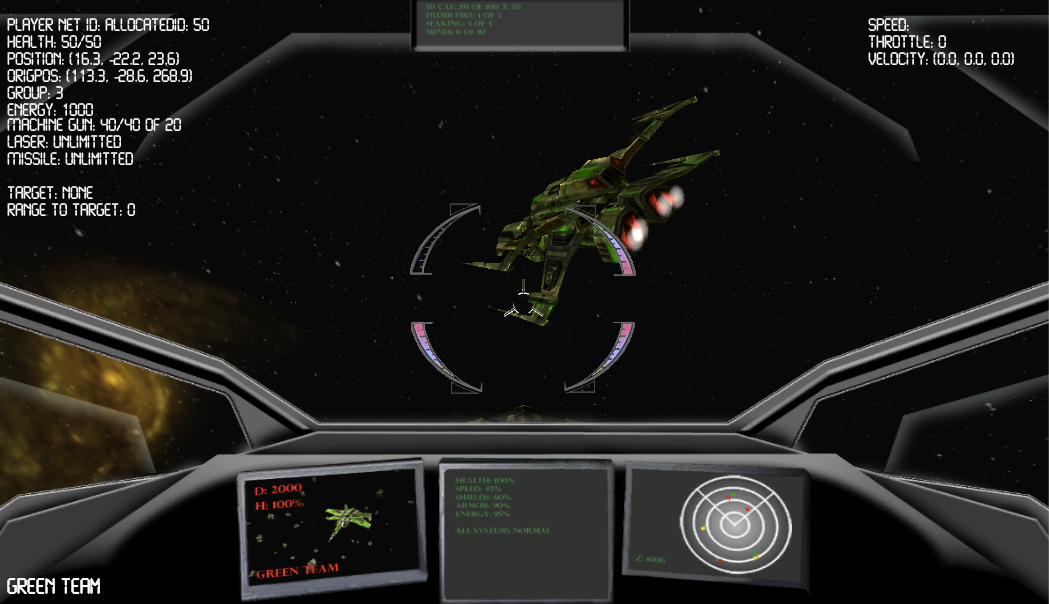 The UI Reminds me so much of Decent

hah, well I don't know if that's a good thing or bad, but I do plan on redesigning the HUD once I have a real artist join me. I'm looking if you know anyone :-) For now things are placeholders, and the text in the upper left and right corners wont be there.

As for looking like Decent that was a first person pseudo space combat shooter so yes there's a similarity. I'm outdoors in space, not inside a bunch of cavernous hallways of a ship. However, I think the biggest difference of what makes Pulsar unique and special even by todays standards is the gameplay. I'll do my best as a single indie developer with the graphics, but the team oriented, multi-player constructs I think are what set Pulsar aside and hopefully everyone will agree it'll be a really fun game to play with a group of friends.

This is looking better all the time!