'Bernie Needs Love', a lighthearted yet irreverent platformer currently in development by Protomni Multimedia, is available for free play on Kongregate as a preview version with 5 levels, and on IndieCity for pre-purchase. 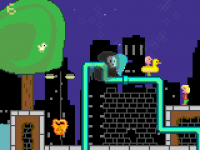 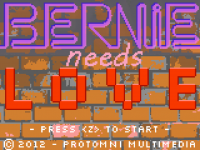 Those who give the game a spin will experience expressive pixelated graphics, an engaging chiptune soundtrack, and an increasingly hard difficulty level that will put a smile on your face yet make you curse the many obstacles you'll find along the way — specially the disrespectful pigeons that insist on pooping all over the place. Other perils include exploding manholes, leaking pipes, and muggers, for example. To conquer such challenges, Bernie relies on the assistance items such as garbage cans that act as jumping pads, and duck floaters that keep him from drowning in flooded areas.

The full version is scheduled for release on February/March, 2013, but you can pre-purchase the current beta on IndieCity with a 50% off discount and and start playing it right away, as well as frequent and automatic updates with more levels and features through the IndieCity client.

Click here to play 'Benie Needs Love' on Kongregate and see if you can survive the first 5 levels! If you like it, be sure to add the game to your watch list in order to be informed of future updates.

Hello Babeco! I'm glad you liked it!
Who knows? I might add some more animations in a future update! ;)
Thanks for the feedback!