'Bernie Needs Love' is a simple and lighthearted platformer in which the player must guide Bernie, a nice but anguished old man chased by death, towards his girlfriend, while avoiding the many hazards of a poorly maintained city and collecting blue 'love-enhancing' pills.

The first 5 stages are already available on Kongregate as a preview of what the full game will be. This web-based version will be updated frequently as new levels and features are added and bugs are fixed — so you can rely on being able to enjoy a lot of the game online for free.

For those who wish to own a copy of 'Bernie Needs Love', with all the content of the web version plus many extra levels, enemies and features, there will be a commercial multiplatform version — initially built for Windows, Android, and the Chrome Web Store. Other systems might be added further down the line, so let us know if your favorite platform is not included.

The availability of Meatballphobia on Google Play and Amazon marks the first stage of the release of our new game, which will soon be available for Windows, Linux, and Windows Phone as well.

We've put a lot of effort into creating a modern puzzle experience with a retro feel that plays naturally and smoothly on both desktops and mobile platforms, and we are glad to say we truly believe we have succeeded at doing so, as do our testers - but you will be the judge of that.

Compared to our beloved platformer Bernie Needs Love - currently in development for Windows and Linux and available with a 50% discount while in beta right here on Desura - Meatballphobia is a much more relaxed experience, with no timer, no highscores, no competitive elements whatsoever: just 50 mind-bending levels of increasing difficulty, all unlocked and available since the first run. The goal is quite simple: you must manipulate the levels in order to drive a meatball onto an unfortunate hysterical head.

This premise might sound over-simplistic and somewhat absurd at first, but we assure you there are many deeper layers of meaning in this. As the description of the game fittingly says, "Meatballphobia is a 2D physics puzzle game about flesh and meat, about the enslavement of both the consumed and the consumer, about life and the systems built around it".

To better illustrate what the theme Meatballphobia is all about, please allow me to quote one of my replies to a question made on the Reddit thread we sent to /r/AndroidGaming last Sunday: "...the idea came from my own discomfort with not only the way meat is produced and the fact it is a fundamental part of my diet, but with the very natural rule that forces one creature to devour another in order to survive. Since the other members of my team share those issues, it was easy convincing them we should invest our efforts in the development of Meatballphobia. I'm not a vegetarian for many reasons, nor does the game have a vegetarian subtext, but I really wanted to create an engaging and entertaining puzzle game that makes the player think about life, about animal and human enslavement, and about the brutality of our current food production and distribution methods."

If you take a look at the following screenshots, you might see that we went for a slightly unsettling 8-bit aesthetics, while permeating the whole thing with a very humorous tone: 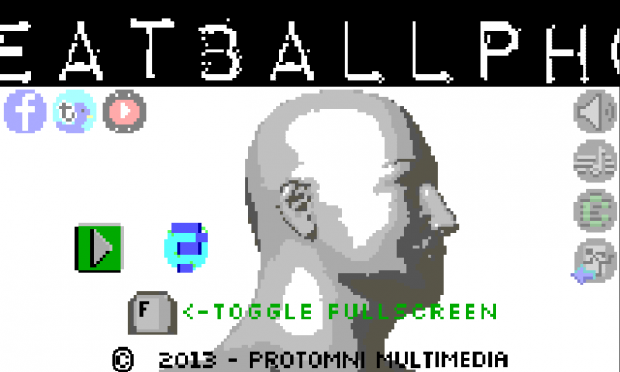 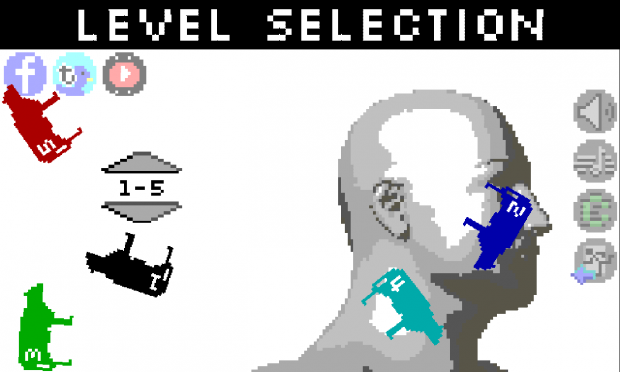 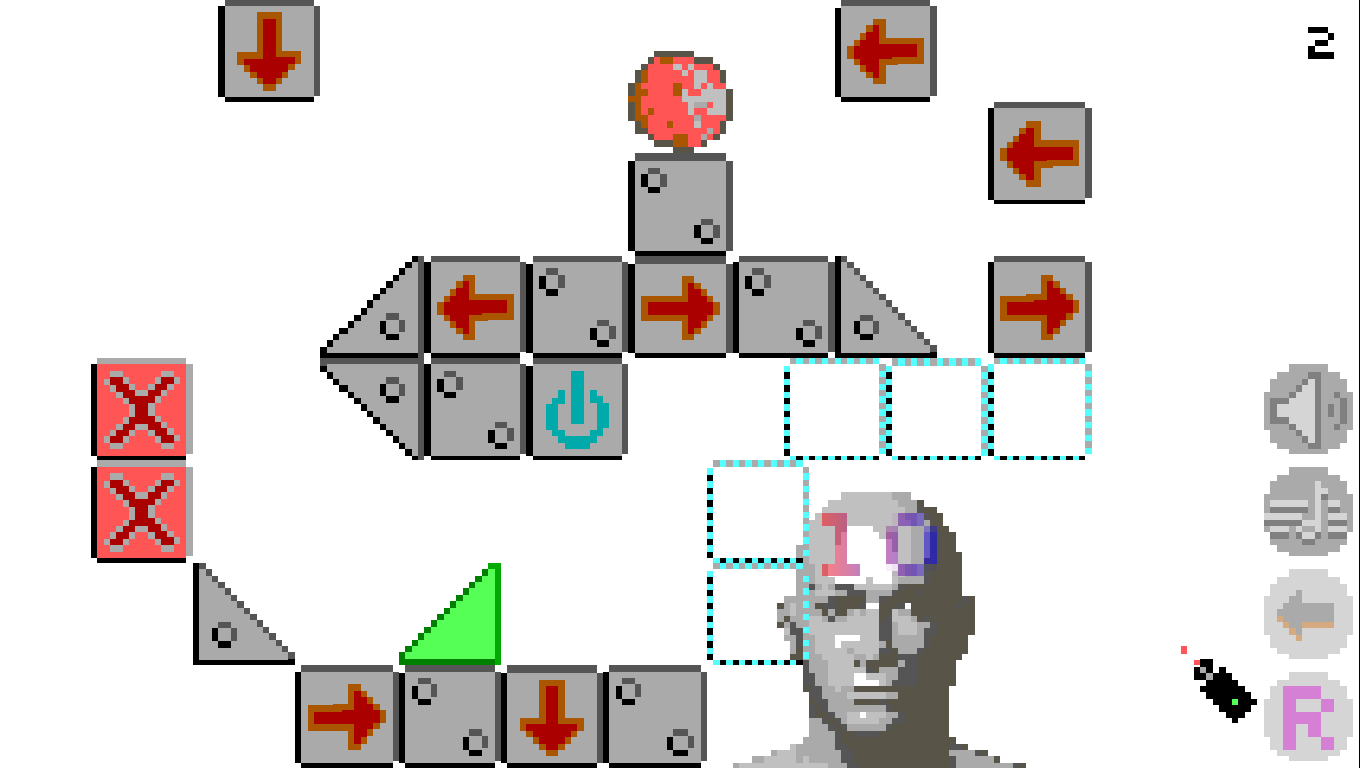 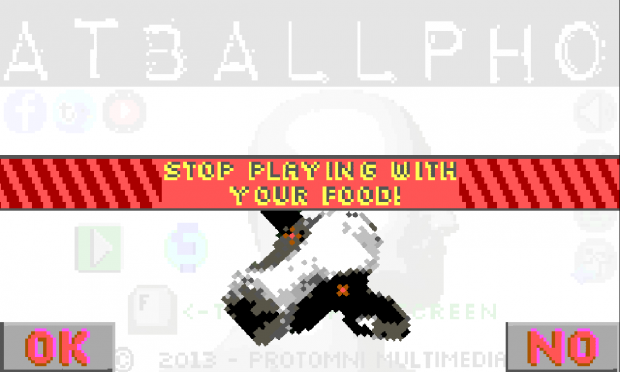 You might also want to take a look at the promo video we've made for the Google Play release of the game, as it is much more illustrative of the player experience than any screenshot we can provide:

Finally, regarding Bernie Needs Love, we'd like to add that development is going strong and the next update will introduce many bug-fixes and nice features such as widescreen support. We are also working hard on adding much more variety in levels 2-1 to 2-10 (which will take place in carnival-related areas). Moreover, we expect to add a new 64-bit Linux build with that update, since a couple of users brought to our attention they had to install additional packages to run the game in that environment.

If you have any questions, comments, or feedback, feel free to let us know.

Thank you for reading this and have fun! We truly appreciate your support!

A simple and lighthearted platformer in which the player must guide Bernie towards his girlfriend.

Protomni Multimedia has just made its retro platformer 'Bernie Needs Love' available for pre-purchase on IndieCity with a 50% discount.

Well, it looks like launching the game from the Desura client should work fine now. Thanks, Desura staff!

If the game fails to launch, please try reinstalling, and please let us know if any issue comes up.

The good news is that the update to version 0.805 is online! Widescreen and all!

The bad news is that there's been some executable naming errors and, thus, both the Windows and Linux Desura clients fail to open the game when it's launched. We are already talking to Desura staff in order to fix this, but, for now, there are three ways to circumvent this problem:

- you can rename the executable accordingly to the warning message;

- you can simply double-click the file itself;

- you can play the standalone builds, which are also updated.

We expect this error to be fixed very soon.

Thank you all for the support and have fun!

You might want to think about providing a 64bit version. I have been installing libraries to get the 32bit version to work for over half an hour now lol

We're very sorry for the trouble and also very glad you told us about it: our Linux test machine is 32bit, so thank you for the important feedback!

The next update — which should be available in a week or so — will be 100% focused on bug-fixes and new features, and we'll be sure to do add a 64bit Linux build along with the 32bit version. Just for the sake of completeness, would you mind sharing with us the OS you're running?

That said, we truly hope this unexpected library-installation session does not detract from the game experience.

Once more, thank you for informing us about this and be assured we'll do our best to fix this issue on the next update.

Until then, have fun, take care, and please let us know is any other issue comes up!

Hi,
Thanks for the reply,
Its not your fault, I am running Arch Linux but am almost certain every 64bit Linux distro will have some of the 32bit libraries needed.

I look forward to the update and the 64bit version,

Thanks again for a great game.

Thank you for the information and for the kind support!

This is a really cool boss fight. I've been stuck on it for almost two hours and I still feel like I'm refining my strategy and improving my timing rather than just banging my head into a wall. Good stuff.

I finally got the [SPOILER] to [SPOILER] all of the [SPOILERS] and... wow, I guess there's a Phase Two? Then I got scythed in the face. Back to this later.

Thank you very much for the kind comment! We've put a lot of effort in this boss fight and it's a great joy for us to know you are enjoying it!

This week, we'll probably publish another update with a couple of bug fixes so that we can start implementing stages 2-1 to 2-10.

Until then, take care and, once more, thank you very much for the kind support — now go show that Reaper who's the boss! ;)

I recently purchased "Bernie" and I've been excited to play this sweet looking game. Unfortunately the installation seems to occur a MCF install error (pretty much tried everything, reinstalling, forced Desura update etc...) Nothing seemed to work, so I tried to download the full installer here. But as it seems after the installation there's no .exe within the destination folder. I got a shortcut on the desktop but the exe couldn't be found. (Tried to search for manually but without any luck).

Any ideas/suggestions please? :) I'd love to play this little charm! Thanks in advance o/

Well, I've just tested the Windows installer and it's fine.

Is there any chance your antivirus software is deleting the game executable?

EDIT: And sorry for the divided reply.

Thanks a million! :) Once again this shows why I love supporting indiegames, what a kind, helpflu reply. I almost couldn't believe it but yes, it seemed to be avast! causing the troubles during the installation. Game runs fine as long as it's deactivated. Weird, never heard about something like that :) But as I said, it works fine now and I'm really enjoying it! Thanks again for the quick/kind and helpful reply :)

Thank you very much for the support and for the uplifting compliments! It made our day!

As for Avast, there might be a way to add the game to a safe list so that you can leave it running, keeping your system protected. Usually, these programs keep some sort of log of blocked executables, so that might help setting it up.

Once more, thank you very much for the kind support and have fun!

By the way, I'll check the standalone installer right now and will let you know how it goes in a second.

On a Windows system, the executable can be found in 'Program Files (x86)\Desura\Common\bernie-needs-love\', and is named 'Bernie Needs Love.exe'.

I am really sorry to know you are having trouble launching the game and I'll do my best to help you through it.

If you are running the Linux version, it seems the official Desura client is still very unstable, so it is recommendable to install Desurium. You can get the source code of Desurium and compile yourself, or you can install the Stable Release — which is much faster.

Personally, I've been having an issue with launching the game on Ubuntu through the client — but, as I checked with the Desura staff and they said it was working, I suppose it's something on my client. If I right-click the game in the client and create a desktop shortcut, however, the game launches fine by double-clicking the icon.

If none of these options work, please let us know your system specifications so that we can troubleshoot this together.

Also, please remember you can always download the standalone versions, which are available both for Windows and for Linux right here on Desura.

Finally, thank you very much for your support and for the kind comment. We are very happy to have you with us and we hope this initial difficulty does not detract from your experience playing our game.

Thanks, good luck, and have fun!