In these devlogs, I will show you the development process from start to finish, for an archery game. This post will consist of the game idea, game design, start on prototype of voxel art form and some simple animations. Let's get started!

In these devlogs, I will show you the development process from start to finish, for an archery game. Before I begin developing, I like to brainstorm ideas and create a Game Design Document (GDD). Here is a link to a template GDD. This post will consist of the game idea, game design, start on prototype of voxel art form and some simple animations. Let's get started!

The game will be a 3D FPS, arcade like game, where the object is to have the best accuracy to obtain the highest score. The game will be available on mobile and desktop, possibility of VR. The player is an Archer. You and other players will shoot at targets to get points. The art style will be made in voxels. Voxels are like pixels but instead of each color being a 2D pixel they are 3D cubes.

I started by making some basic voxel assets in Magicavoxel. Export those to .obj. Then exported the ones I will animate to Blender, so I can rig their parts. After that, you can export as an .obj to use in Unity along with the .png you get from Magicavoxel. Here I have placed them in the Unity Scene on a flat ground: 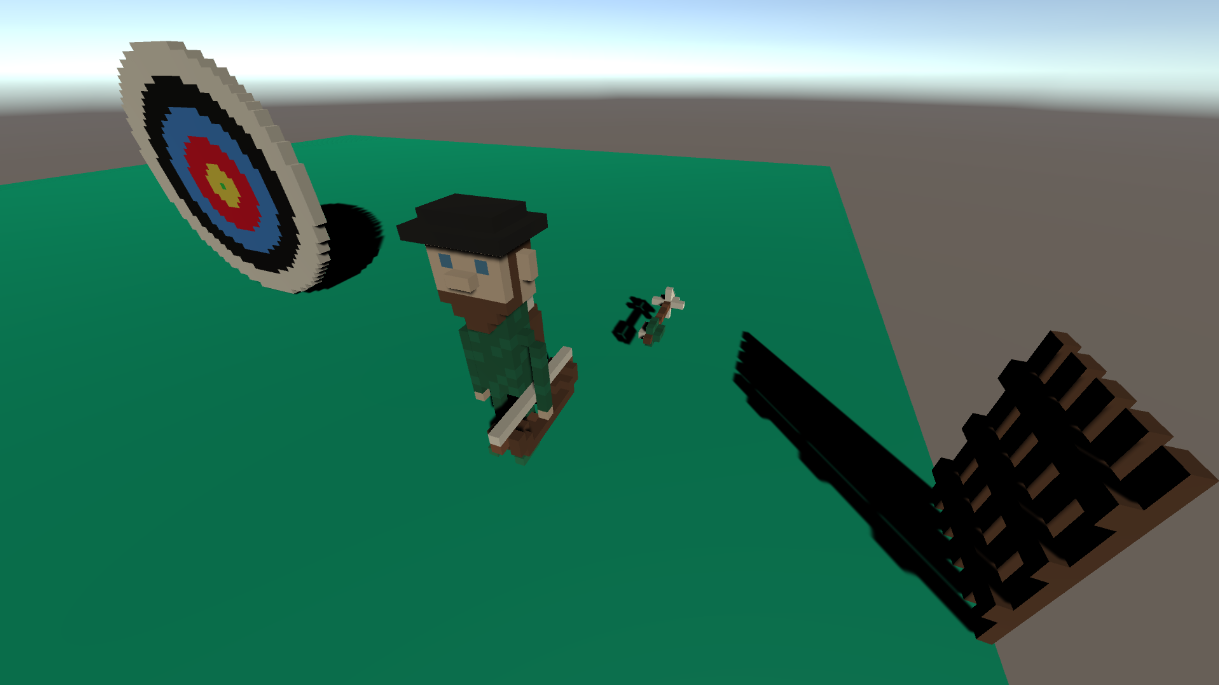 Next, I wanted to see how hard it would be to animate them. I created an idle and a simple walking animation, even though the Player may not be able to walk in-game.

It was not too difficult to animate the assets with Unity's built-in animator. I think I am going to stick with the Voxel art form as assets are fairly easy to create, export, and animate.

Now that I have a character, I need to create shooting animations and add colliders to the target. I will be going by outside imperial rounds under AGB rules, where they have score values 1, 3, 5, 7 and 9. In addition, there is an inner 10 ring, sometimes called the X ring. I think I will achieve this with a lot of box colliders. If you have another way, please comment below.