Hello everyone! Joshua here. It is time for another progress update for NAIRI! Check out a video and read about technical/art bits of the dev-process!

Hello everyone! Joshua here.
It is time for another progress update! First up?
Check out the video below for some new information on how things are going for NAIRI!

In case you’re not in a movie watching mood, here’s the most important stuff in the video:

- The intro-scene is finished and in the game.
- We created a working, flexible dialogue system.
- All data can be saved properly per save-file.

With the laborious intro-sequence done, You can now put all her energy into drawing new backgrounds and character art.
Programming-wise, now that the ‘boring’ stuff is out of the way – think menus, saving, dialogue system, inventory management...
I can focus more on level design stuff as I implement new content into the game. Right now, we’re working on the prologue part of the game.
Did you see Nairi’s room in the video? That’s where it all starts!
And for those of you who care about programming and art details - read on!

Let’s start with some technical stuff for the programming-inclined people here.

One caveat I was dealing with was taking dialogue text from an XML file and scrolling it into view, formatted as rich text – without showing actual tags such as and .
This was hard - it’s easy to forget how complex text formatting can be in programming!

At first I wanted to go Rambo with a bunch of regular expressions, but instead decided to solve the problem with some masking-magic. It works great now! 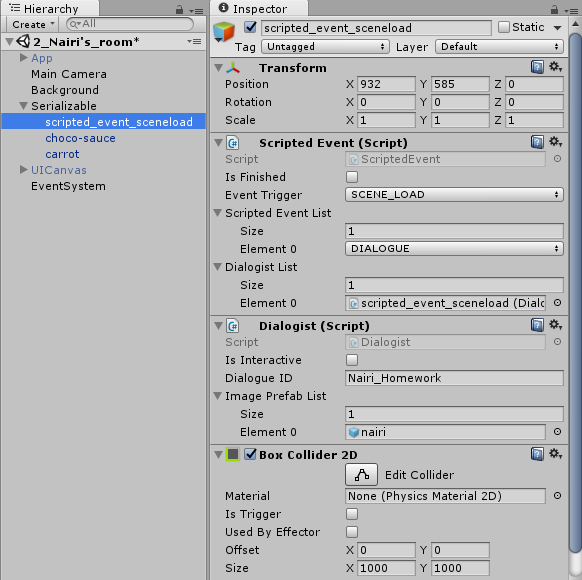 Another cool thing we have in NAIRI now is scripted events! We needed a system to decide how, when and what should happen during set scripted-events.
For now, I came up with a solution that takes certain triggers and events and fires them at the right time.
Not too exciting to show, but super important!
This can be seen in how Nairi’s dialogue triggers right after the intro-sequence without the player doing anything. Yes, that’s a scripted event! 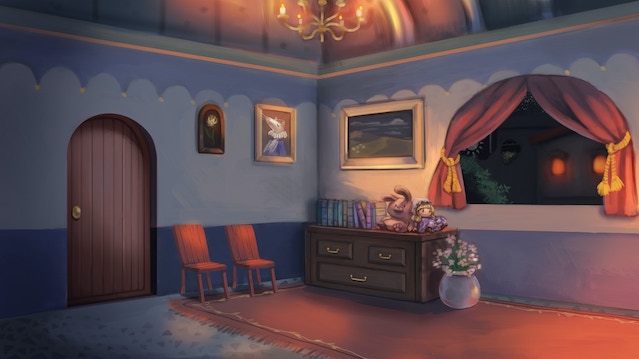 Nairi’s room is one of the newest backgrounds made for the game - right after You finished with the time-consuming intro-sequence, she went to town on this one!
It’s exciting to have the actual first ‘level’ in the game now.
We’re both hard at work on making actual content now, after all these weeks of working towards laying the base for the game to be built on. 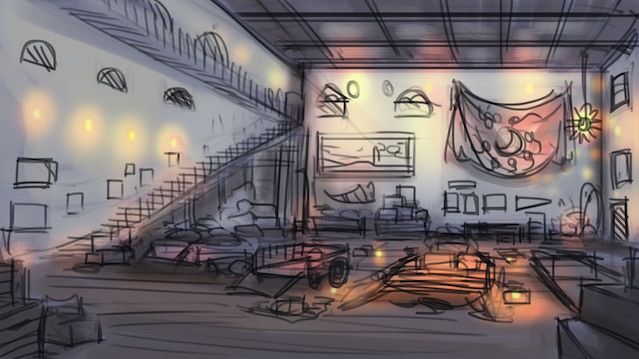 We can’t tell you what is going on, but here’s another glimpse at something else early in the game.
Do you have any idea of what this place might be? 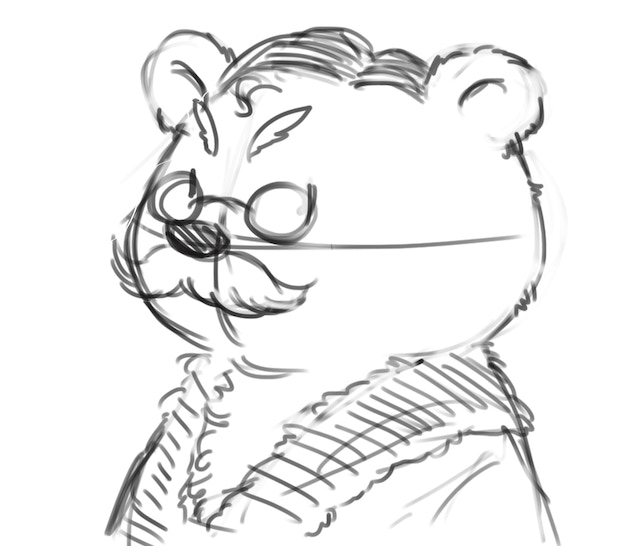 And here’s an early sketch of a character we’ve never talked about before!
His name is Fredrick and he provides a valuable service to the people living in the rich-district.
What’s Fredrick’s business? We can't tell you yet!

And before we go, we will show some stuff from the intro sequence! 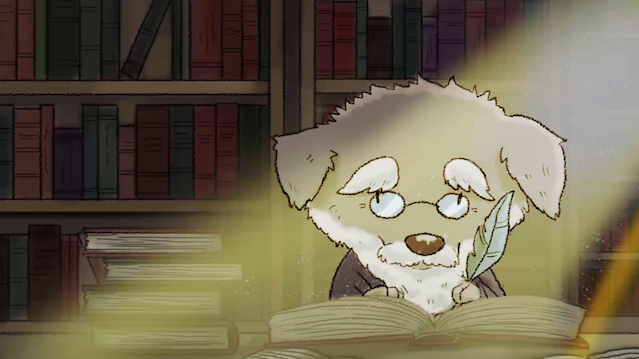 It’s a cute scholar dog! Remember how the middle-district is famous its colleges and spiritual scribes?

And now, here’s what the sequence looks like... animated! In the end, it took too much time for You to make the entire sequence 100% frame-by-frame!
We are an indie team after all, and she's our only artist.
She saved time by adding a subtle "children’s crayon art book" style to the line work and some cross-fading between her hand-drawn key frames.
It was a clever idea on You’s part that we’re both really happy with!

Alright!
That’s it, for now. As always, we hope you had fun reading through the update!
We’ll get back to work – see you later!