Duck and cover! (... and shoot) Doing a little press re-cap and sharing some thoughts on level design. Also showing some new functionality.

I haven't updated the devlog for a little while since I've been off doing some freelance work and been busy trying to get the word out about this game!

The first website to pick up on the game was actually my favorite Swedish gaming news site FZ.se:
Fz.se

I also did an interview for lv.80, which you can check out here:
80.lv

And last but not least, Indie Game Magazine also wrote about it! Check it out here:
Indiegamemag.com


It's so nice to having revealed the game and seeing people talk about it, and actually getting excited about it! Somehow it feels more like I'm actually making a proper game now

So, now that the initial "marketing-push" has happened I feel like I can go back to focusing more on making the game again. I've been warming up my game-making-muscles with a bit of level design. It felt really good focusing on gameplay again, after having had the focus on the visuals of the game for so long.

I also made another wall and floor theme which is completely "white-box" to be used for making the initial white-box levels, to stop myself from getting distracted from the flow and functional aspect of the level.

Example of a level built in one go.

Currently I'm approaching level-making in two ways. One way is to just start making the level (usually in the middle of the level) and keep building upon it linearly. This way of making levels usually requires me to really 'get in the zone' mentally, and usually gives the levels a better 'flow' feeling to them.

The other approach is to make levels in different "chunks" or "motifs", as I usually call them. This approach is great for when you want to explore a certain mechanic or "hook". It usually involves trying all the different combinations and abuses of the functionally I'm trying to explore. However, putting all of these "motifs" one after another doesn't always equate to a good level. Therefore I like to keep a little library of different motifs that I can pull in to a level that needs some more gameplay sections. Or just starting from scratch and putting together various motifs which might work well together. Keeping the motifs in groups makes them easy to move around to try different combinations. 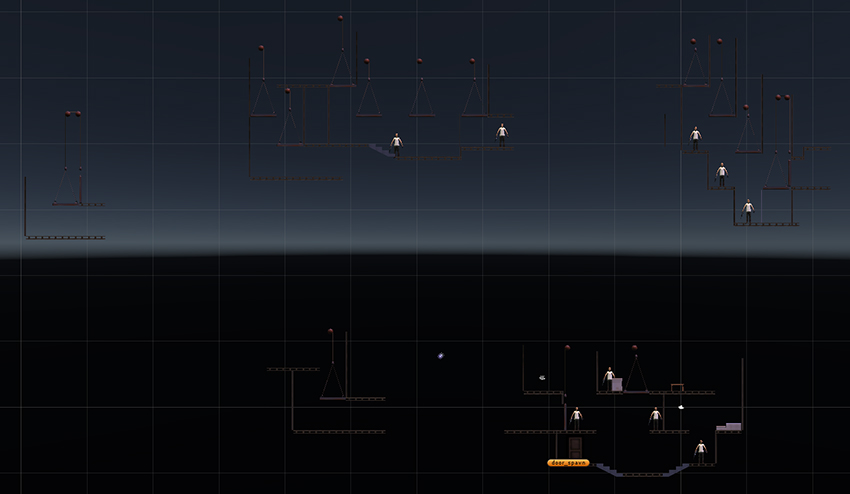 Eventually I will probably approach level making in a third manner, namely from a visual or "event" aspect. That is, making pieces of level that maybe wouldn't be so interesting if it was plainly white box, but that focus more on the dressing of that particular moment.

However for now I want to keep the focus more on the "pure gameplay" and be sure there's enough good stuff to cover the whole game, and in the process of doing so invent new mechanics to be used for designing levels.

Not sure how long it will be until my next entry. For a while I will probably just be making levels, and not sure how much of that I should be showing at this point

Let me know if there is anything you would like to know more about, or just any general thoughts you might have!

Until next time! Ta!

Phhewiiee... What a week!
I've been busy doing levels most of the week. I now have about 10ish levels with a grand total of about 20-30 minutes worth of gameplay! Hurrah! Though most of these levels are still only whiteboxed, and they will probably be iterated further in the future... but still. Hurrah!

Just for the heck of it, here's a GIF from one of the new whiteboxed levels showing a bit of brutal shotgun action.

It's funny how when you work on something for a long time eventually you get blind to the little things you told yourself you'd fix later... That's why I was really happy to hear feedback from ya'll out there! One obvious thing that somehow I had gotten used to seeing was how the arms used to spin around the back of the main character when aiming in 360 in the middle of the air. But no more!

Now the main character spins to face the direction he's aiming in. It's great because it makes you feel even more acrobatic when playing the game!

Another week has passed and progress has been made! This week I've been wearing my coder hat and trying to wrap my head around my previously written code.

The focus has been on small details in the players movement, animation and poses. I've also experimented with a new ability, namely being able to shoot from cover. Check it out here:

After sorting out the major quirks in the players movement that bugged me I moved on to some enemy work.
I always struggled with how to solve the issue of being able to shoot enemies half way through them spawning from a door. However I now believe I have found a fairly neat solution. The enemies now try to take cover in the door opening if you shoot at them before they're fully spawned.

I've also tweaked and added some new animations for the enemies, trying to make them act a bit less... dumb.
They now react when there is a gunshot happening that they can't see, like so:

Next I might do some work on the actual models of the enemies. I've still got loads to learn in terms of 3D modelling and skinning...