So let's sum up what's been going on since the last development report.

I've finished the textures of the two new monsters this last week, aswell as implemented them into the game.
The Martyr is a fast moving and agressive monster of the Forsaken faction, it will attack by biting you or vomitting toxic liquids all over you. Something to keep in mind is that the Martyr have three "Spore" bombs attached on it's belly that the monster may detonate when close to you. While the monster will die by this action it will also deal alot of damage to your character if you're standing too close to the explosion.

I accidentally made the character alot larger than I intended, so the size of the creature in the screenshot below will be changed as it was first intended to be only half or 2/3 of the current size.

The Fatboy, a relatively slow moving (and oversized) fly, it replaces the "Pawn" monster as the weakest link in the Forsaken faction. It is quite dumb, but hungry and will try to eat you.

Pawns may still appear on the maps but can only do so by beeing summoned by a "Conjurer" monster.
I've also started working on a new Void Map called "Lost City", I was intending to show some pictures and info about it here but I will save it until next weekend when I've made some better progress on the map as it is still in a very early stage. The "Lost City" map is the last thing left to do of what I had planned for the 4.22x release though so with that said, it's getting close! :)

As for the UI there are some changes made, when approaching a Map Entry or Exit Point the UI will now, besides the monster count, also display the amount of Markers that has been activated, secret areas remaining undiscovered and rare chests that are still in the map.

Also the message box (far left) has been updated, messages appear in sharp red color to make them stick out, and the messages will stay on screen for a longer duration aswell! 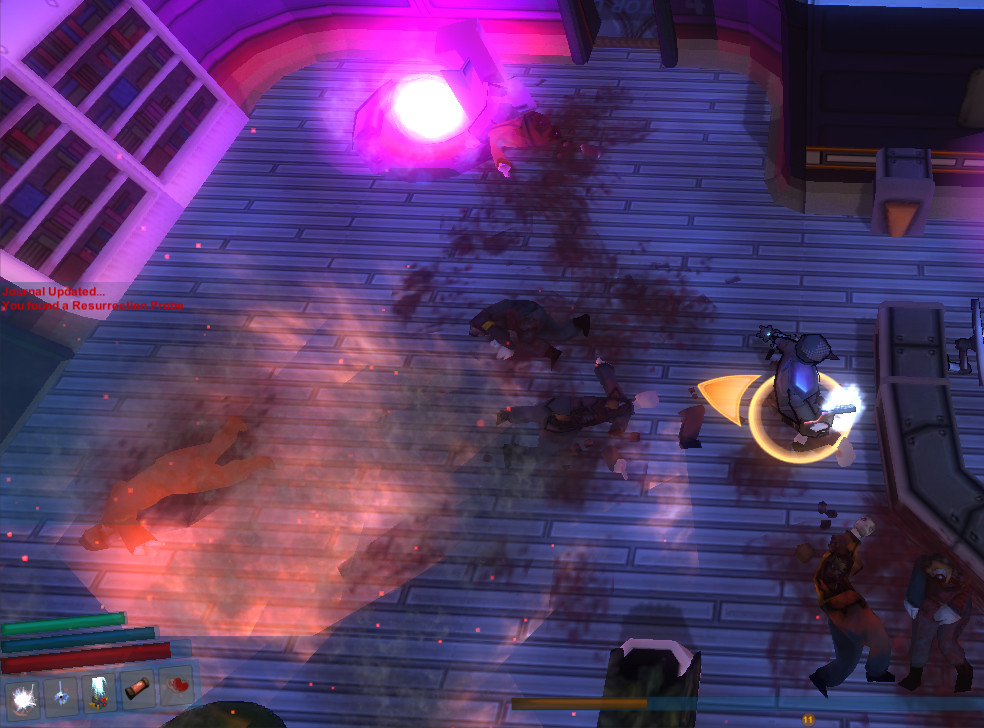 A new item has been added, it's a bird-face-helmet-thingie. It's of exquisite rarity and can only be aquired by finding the wandering merchant who sell it though.

The Shop UI now look more similar to your Inventory Window, the style of these two UI elements were too different and I found it sort of confusing. Also the Archeologist (Formerly known as "Enhancer", found in Secure Command) will now generate items for his stock. The items he sell are portals that lead to Forsaken Void maps, you will need to discover the voids before he can sell them to you though.

I've added a new Damage Effect called "Bleed", it works very similar to the Damage Over Time effect, but it will not deal any elemental damage however, it will inflict damage on it's target until the target has died. This effect is to representate a severe wound inflicted on a monster, each time you hit a monster with a critical hit there's a very small chance that this effect is cast. Also some abilities will now be using the Bleed effect. (With better chances of beeing cast than from the critical-hit-situation though!)

I've also adjusted some of the more powerful monsters so that they can't be scared while some no longer will try to escape if they are severely wounded. (Minibosses and bosses excluded though, since they will do neither by default!)

As I mentioned earlier, the amount of markers, rare chests and secret areas can now be seen when near a zone portal and there are reasons for this.
As goes for the secret areas it's simply to tell the player if there are still undiscovered things on the current map, since some secret areas hold unique items, map portals, monsters or merchants but as goes for the Markers and chests might not be so clear I suppose.
I wanted it to be more rewarding for the player to explore each map so I've set it up so that when you have opened all chests on the current map you will receive Void Crystals, the most rare crafting material, required to modify Mythical and Exquisite items. When all Markers are activated you will receive 50 points per Marker to your Bounty Reputation (eg. if there are 3 markers you will get 50 * 3 pts, ie. 150 points)

Awesome work! Glad to see you are updating and improving the game and user interface. Keep up the hard work!