In which the woodworker's workshop is just about complete; the associated puzzle is done; "grouping" items are improved; lockpicking gains an example; the minigame introductory-sound proves troublesome; progress towards the demo is, I think, made; and the side-game editor continues to slowly develop.

This week's screenshot shows the woodworking workshop that I described last week, now implemented in the level: 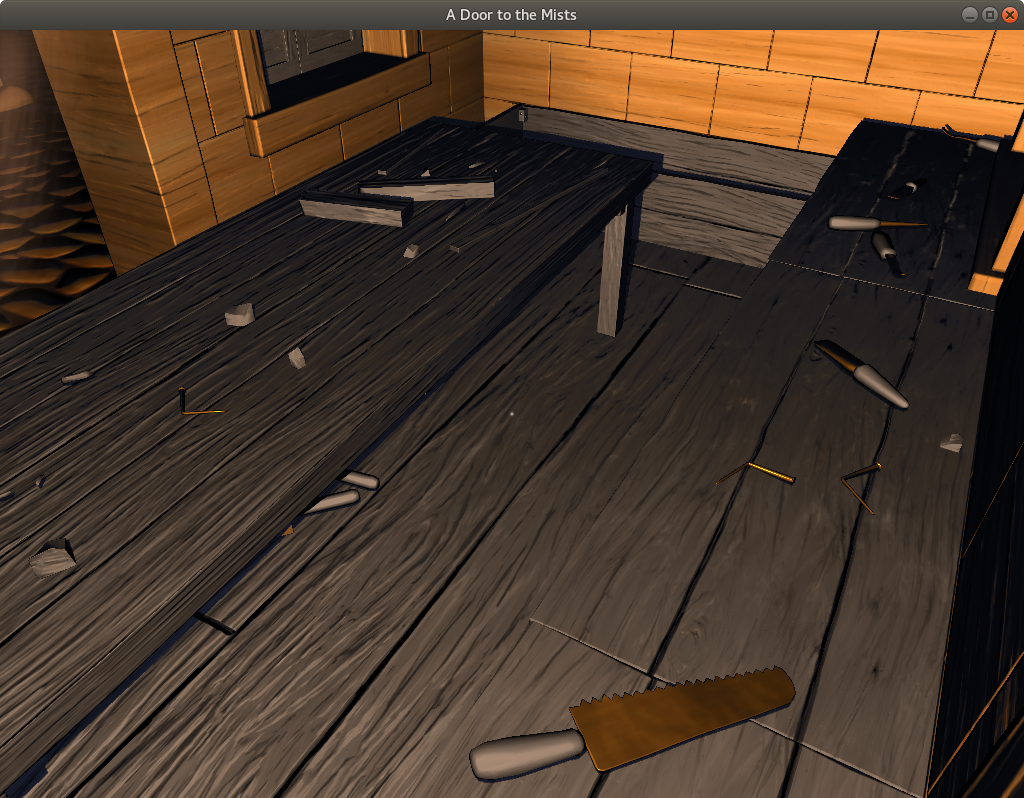 The week just past saw puzzle-implementation, level-work, bug-fixing, and polishing:

To start with, work continued on the scene shown above, and on the logic for it. Props were edited; the contents of the workshop were laid out and adjusted; the inventory items found therein were placed; the logic for the associated puzzle was developed; and a sound effect was made to depict the action performed on succeeding at said puzzle.

Furthermore, a nearby building which is also involved in that puzzle (as well as its immediate surrounds) saw some minor adjustments, such that the player should no longer be able to simply jump up onto the wall that is the puzzle's goal.

As it stands, the whole thing works, I do believe! The player can find the various items involved in the puzzle, and use them to construct a ramp in that nearby building. ^_^

That said, there are a few touch-ups that I yet want to make, including the moving of objects that turned out to overlap windowsills, and adjustments to certain props.

In doing so, I found that there was a bit of a problem with my "grouping" inventory items--that is, items that group together in a single inventory-slot. When the items being grouped together differed significantly in their sizes, the overall scaling could result in smaller items being a little hard to make out. In addition, the presence of large items could result in the set overlapping a bit too much for my liking.

So I spent some time improving the presentation of these "grouping" items. They now better-adjust to various sizes of grouped item, including rescaling smaller items to be more visible alongside larger ones, I do believe.

My lockpicking minigame is, I think, a little unusual. It involves having the player blindly probe at the contours of a lock, seeking the narrowest inset within.

I felt a little uncertain that my introductory-text for it would adequately convey the concept to new players. So, in the week just past, I decided to add an example to that introductory text: when the text is opened, with it comes a little diagram showing visible contours, and an arrow pointing to the narrowest inset. Hopefully this will help to explain the minigame! 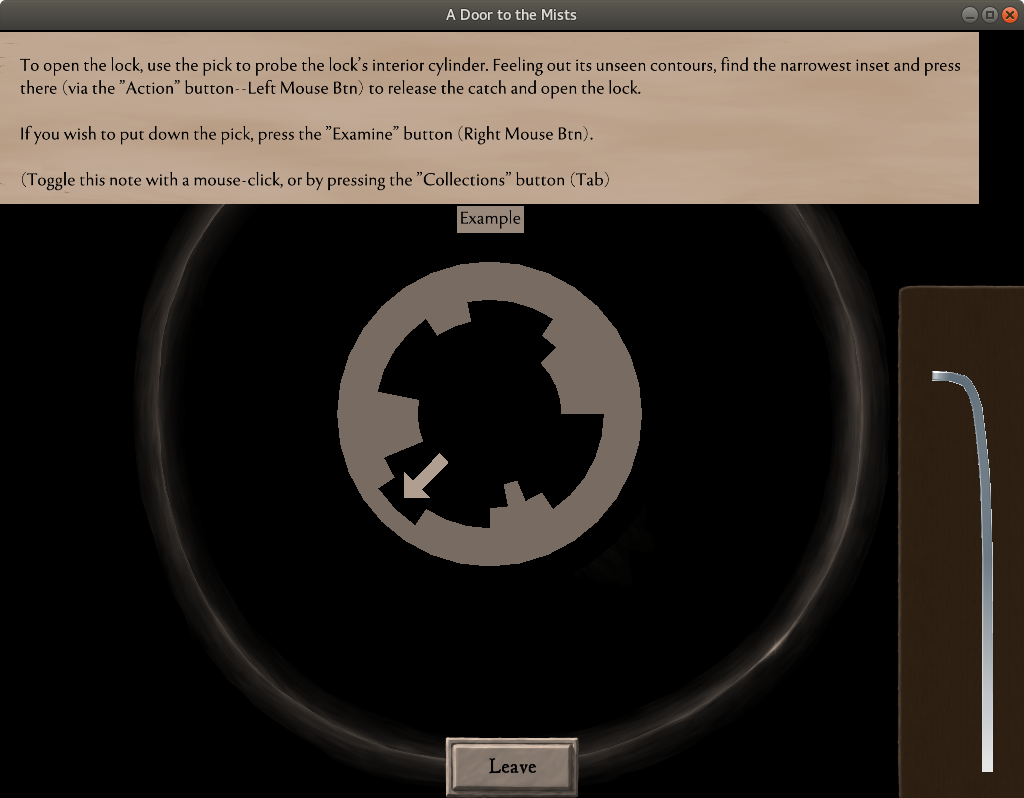 Speaking of minigames, I've been having some trouble coming up with a sound to play when they start. I think that I mentioned last week that I had a prospective sound-effect for this; as it turns out, I wasn't happy with that effect when tried in-game.

I think that the problem, in essence, is this:

I don't want something connected to the physical actions taking place, as I want a sound that works for all minigames, regardless of what objects might have prompted them. That leaves me wanting something less representational.

Elsewhere in the game I've been using gongs, bells, and drums for various purposes, and these seem like they could make for nice introductory sounds. But, alongside the sudden switch to the minigame view, one or two chimes or beats can feel a bit too abrupt and unwelcoming, I fear.

I have another idea in mind, sticking with the idea of drums, but have yet to try it out...

As to progress towards the demo, I think that I'm getting there, bit by bit. I still don't yet know when it might be released--but soon, I hope!

And along the way, I performed a variety of fixes and touch-ups that don't seem worth mentioning here!

And finally, as to my little side-game, the tile-editor that I'm building for it is making progress, I do think, as I slowly build out its features and figure out how I want it to work.