We begin to get into one of our core boss designs- multiple strong bosses that the Player must engage with simultaneously. With the completion of our Lesser Dragons, its time to conjoin them into a much more difficult fight.

The Lesser Dragons are intended as miniboss fights, preliminary to their greater forms.

As a final test, we think conjoining our 3 Lesser Dragons, which we’ll be referring to as the Souls of the Lesser Dragons, would suffice for showing the Player how we wish to advance this game’s boss fights, alongside giving an even more interesting and difficult challenge.

While we don’t know at this time exactly where the Souls of the Lesser Dragons fight will go, we imagine either before the greater Dragons, or before the Dragon’s Master, the Hydra. That’s their currently determined place in regards to ‘difficulty’ (Hydra being the highest level of difficulty for the game’s Beta stage).

This is the fight that has come as a result. This is the Souls of the Lesser Dragons boss fight. 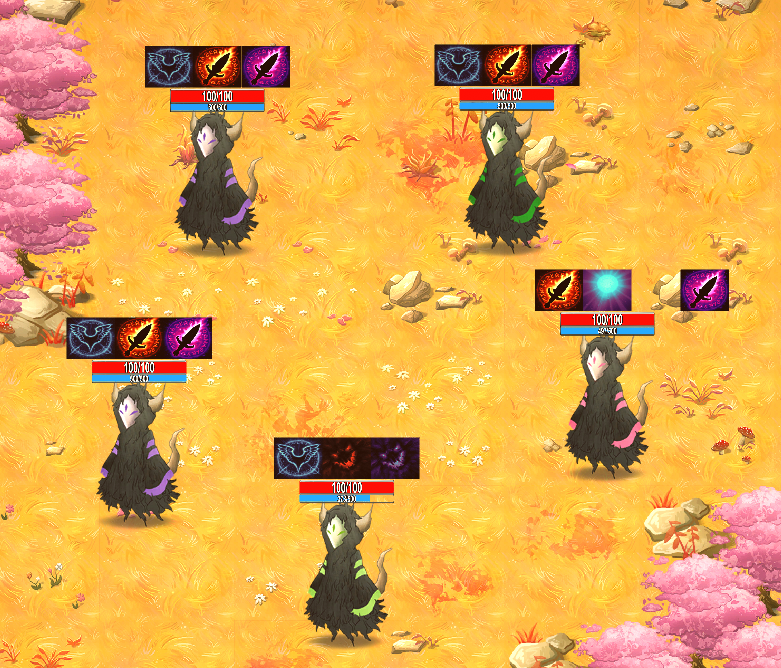 First, we need to discuss some balance adjustments. Because they are definitely needed. Given that the Player has yet to acquire the resources necessary for advancing their Units into their final tier, they are stuck with Apprentices, a Tier 3 Unit. Apprentices are designed to have minimal spells to cast in order to give Player full opportunity to micro their Units, and are balanced around such a philosophy. This fight is almost no different, except it will demand a few extra spellcasts from player, given that it is intending to be a transitional boss.

For balance, we first started by halving the health of all the Dragons, alongside halving their resistances. This is very important because mana is limited among Apprentices, alongside damage output. In the single fights, one’s mana pool can be fully expunged into the target. But here, it must be split among the three.

The Soul of the Lesser Dragon of Lightning is now incredibly frail and weak given its halved HP. However, its health regeneration is still too powerful, even in this current state. Dodging the spells of the other two Dragons is complicated enough, and having to do that while simultaneously bursting down the SotL Lightning Dragon can sometimes be outright unfair. Therefore, it deserves some health regeneration, to keep you on your toes, but not a lot, so its still reasonably defeat-able.

The Soul of the Lesser Dragon of Flame is a different story. It references back to what we said previously- the role of the healer. All damage done to the SotL Flame Dragon, given its nonexistent health regeneration, can be considered ‘permanent’ for the duration of the fight. That is, of course, if the healer doesn’t step in.

That’s where the Soul of the Lesser Dragon of Frost comes into play. In the previous blog post, you may have recalled the SotL Frost Dragon’s “Rain of Frost” spell. This heals itself, anything nearby, AND summons Frost Arkoyles for everything touched by the healing. In the original fight against the Lesser Dragon of Frost, the mechanic was oriented around dodging its healing spell to avoid it summoning too many Frost Arkoyles. Well, in this version, that mechanic has been postponed. Because the real part we care about is its ability to heal those nearby for quite a bit of health. And this mechanic is ONLY triggered if and only if the SotL Frost Dragon is damaged. Meaning, if said Dragon is hurt, it will attempt to cast its healing spell (the spell has a 60 second cooldown, which is very short given the complexity of this fight and how long it can go on, and works out to about 2.5 hp regen/s). Which in turn means that if you refrain from attacking the SotL Frost Dragon, you can keep it from healing both itself AND the Soul of the Lesser Dragon of Flame (+SotL Lightning Dragon, if its still alive), making it so ‘permanently’ damaging the SotL Flame Dragon is tied directly to damaging the SotL Frost Dragon. This, in turn, means that there is the role of a ‘dedicated’ healer into this fight alongside emphasizing that Player should enact a clever use of mechanics in order to reduce the difficulty of the fight. If Player recalls how the original Lesser Dragon of Frost’s heal works, they’ll know its something that should definitely be avoided in this fight, and that attacking either the SotL Flame or Frost Dragon solely is the better decision, but not both simultaneously.

Finally, the Soul of the Lesser Dragon of Frost has minor health regeneration. Given that its the best candidate to slay last for both reasons mentioned above alongside reasons we’ll mention below, it needs some but not a lot of regeneration- its core health regen is in its healing spell itself. The mechanic for dodging its healing spell returns, so the final goal is to manage your mana pool correctly enough to still be able to kill it without it absorbing all the damage. All of these Dragons are lethal, and will kill you if you aren’t careful. But you must also ensure proper technique is in order to slay them as well.

A final augmentation is to the Soul of the Lesser Dragon of Flame. Its non-Soul version contains an Aura, the Aura of Gust, which invokes powerful winds to push all your warriors back. During this state, your warriors are thrown back and also unable to attack; this made the fight fairly unforgiving, since most of the time your warriors could not even get a spell off. Given the abhorrent amount of stuns already listed between the SotL Flame and Frost Dragons, a third one (that you cannot dodge) is just outright imbalanced (especially since your Apprentices have no current way of dealing with this Aura).

To make the fight feasible, we also had to change some things around in regards to enemy mechanics. Normal enemies are fully deactivated by the Fog, as discussed in the Lesser Dragon of Lightning blog post. So we utilized the code to keep the Unit from being disabled in order to make this fight function. We also boosted the Sight of the Dragons, to always keep them aggro’d accordingly.

Now, we can get into the fight itself.

The fight is almost broken into 3 stages, respective of the 3 Dragons.

The initial stage begins with the elimination of the primary threat: the Soul of the Lesser Dragon of Lightning. The SotL Lightning Dragon is the first Dragon we must slay due to the fact that its spells cannot be easily dodged. Whereas the other two Dragons have attacks you can avoid, the speed and area effect of the Dragon’s Lightning is almost unavoidable. Therefore, the best strategy you can enact is to burst down the Dragon before it has the opportunity to deal too much damage to you.

Next, we have the SotL Dragons of Flame and Frost. As we discussed previously, your best strategy is to defeat the Flame first. Its attacks are the most devastating, its stun has the widest area, but it lacks any form of healing itself. Taking advantage of the fact that the SotL Frost Dragon cannot use its healing spell without first being injured, we can defeat the SotL Flame Dragon without worry of regeneration, and this can be done at a slow enough pace in which we can successfully dodge the majority of incoming spells. For, if there is no health regeneration taking place, we can take our time and pick our shots carefully to avoid as much damage as possible, alongside stalling for a bit of extra mana regeneration before the last phase of the fight ensues. Its of critical importance that we carefully aim all our shots accordingly, as to minimize mana waste.

Finally, the SotL Frost Dragon. Since its by itself, we can fight it like an easier version of the original beast. And, given that its resistances have been greatly reduced, we can burst it down with powerful mysticism.

Two key spells are utilized throughout this fight-

The first is Fear, a spell which forces the hit target to flee for a few moments. This is important for zoning, because while dealing with the initial threat, we want to try to avoid confrontation from the others. Its of critical importance to not lose your Apprentice of Sound, for zoning via Fear is one of the few tools you have to protect yourself from the onslaught of the collective Dragons.

The second is Mystic Energy- our main damage dealer. These Dragons are very, very powerful, and can kill us almost instantly. A quick stun from the Frost or Flame can be followed up with all 3 Dragon’s powerful attacks combined, an attack none of our warriors can survive from. Bursting them down with Mystic Energy is the key to slaying them quickly, before too many attacks can come at once. Especially since Fear only lasts but a few moments before the Dragon is back in the fight. Given their halved resistances, they no longer have the high Mystic Resistance as their originals did. Therefore, Mystic Energy is the best tool for this particular fight.

Now, we have yet to address the video. As, if you watched the whole thing through, you’d realize we didn’t quite defeat the boss. Not yet. After hours of attempts, the video shows our progress towards actually defeating the boss, and being able to label it completable. As of right now, we have yet to fully prove that. When we first started fighting this boss, we thought it was impossible to even slay the SotL Lightning Dragon, and that the boss as a whole was in need of some great adjustments. Now, we have a full understanding of how the complexities of this fight progress, and know its possible, even though we have yet to actually pull off a successful fight. We hope in the next blog post we can delve deeper into the progress and technical skill we needed to employ just to slay this brutal boss. And we hope you look forward to it.