Post news RSS Empires in Ruins - To tame a land

I would say that Empires in Ruins can certainly be defined a 4X game, but with the same certainty it is quite an atypical one at that.

I think the most fundamental one is that in EiR, the eXpand factor is not depicted as a war of conquest towards new territories. It is instead a defensive war of re-conquest, in territories supposedly once already owned by the player.
That also impacts the definition of eXplore. Yes, after all the contact was lost with the rebelling provinces, the map blanked out for the player. No more idea of the state of the land, of its internal borders, etc. 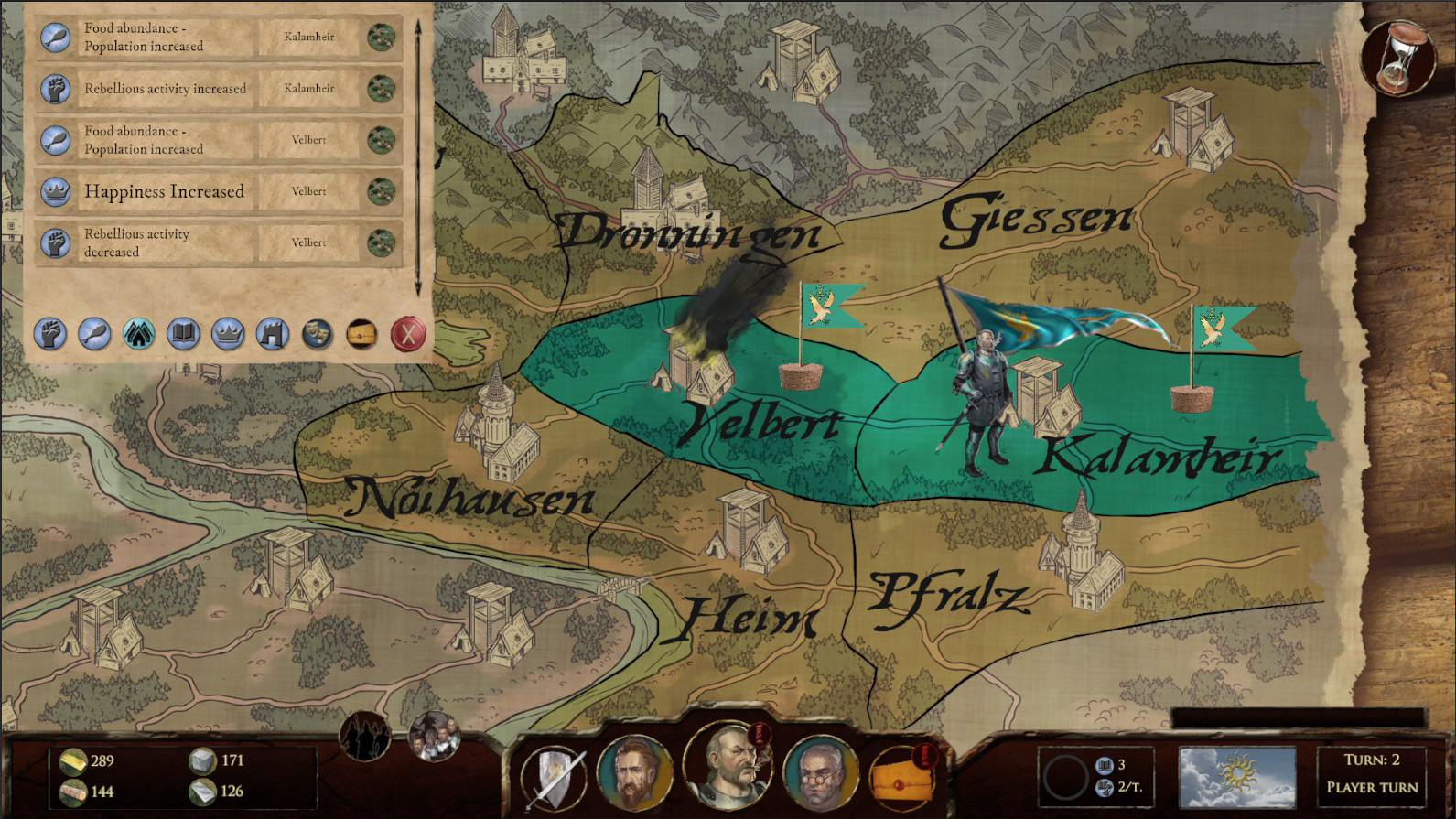 The "hopeless" military campaign lead by Sergeant Heimer starts with the premise of a dramatic shortage men and resources for a classic frontal war. Therefore Corporal Turg, that is often sharper than how he looks like, suggests the Sergeant to take a different approach. Setting glory aside, the ragtag army can sneak into abandoned defenses still present in the rebelling provinces, and ambush or bait the enemy into attacking them (eXterminate).

Unfortunately, once a province battle is won, the struggle to tame the province has just began. 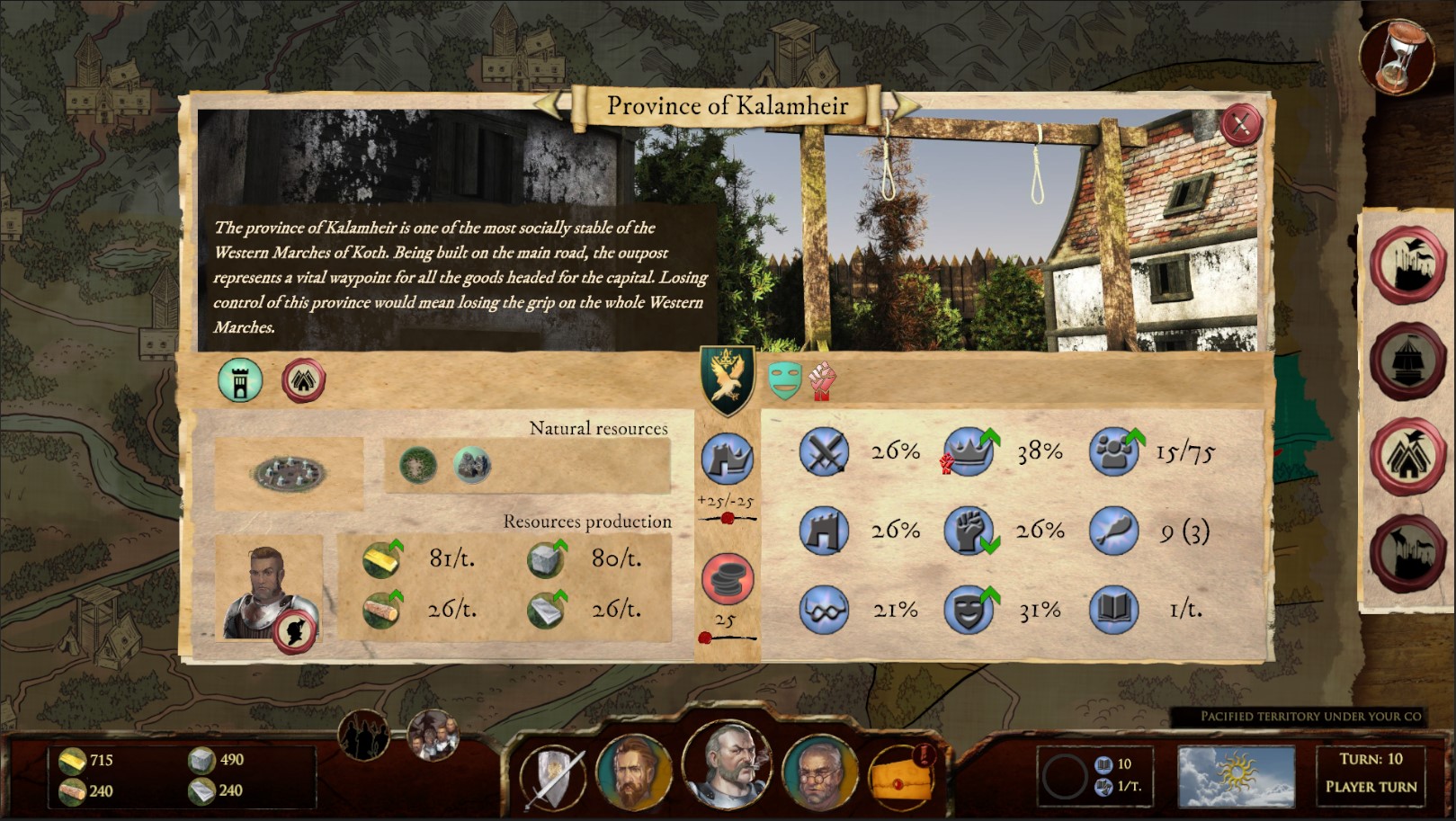 In order to understand what we are talking about, it's necessary to clarify 3 out of the 9 statistics describing a province.

Authority: Represents the Player authoritative grasp on the province. How much the government IS there. Can be raised through skilled governors, assigning more guards and building and raising command infrastructures. 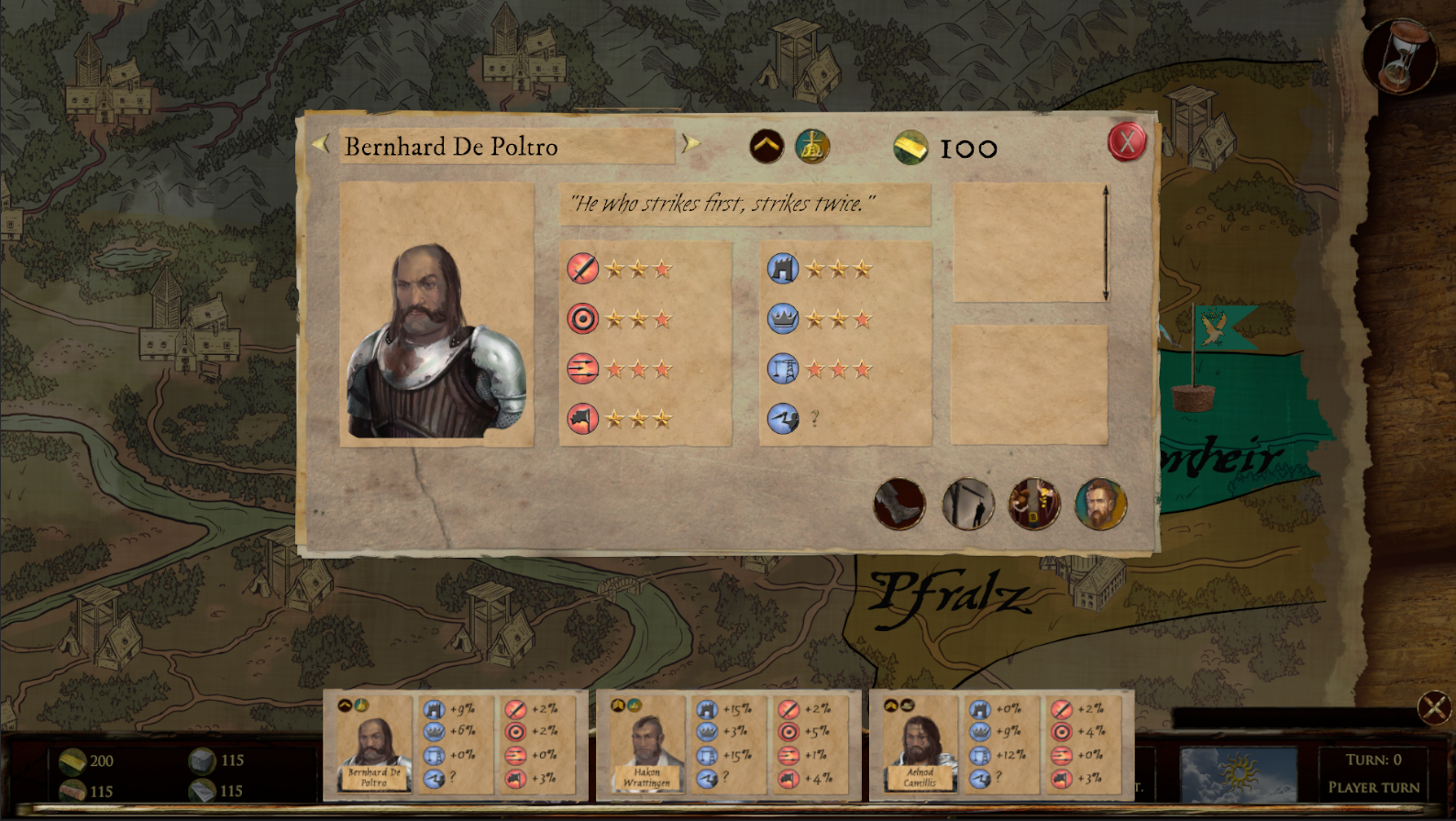 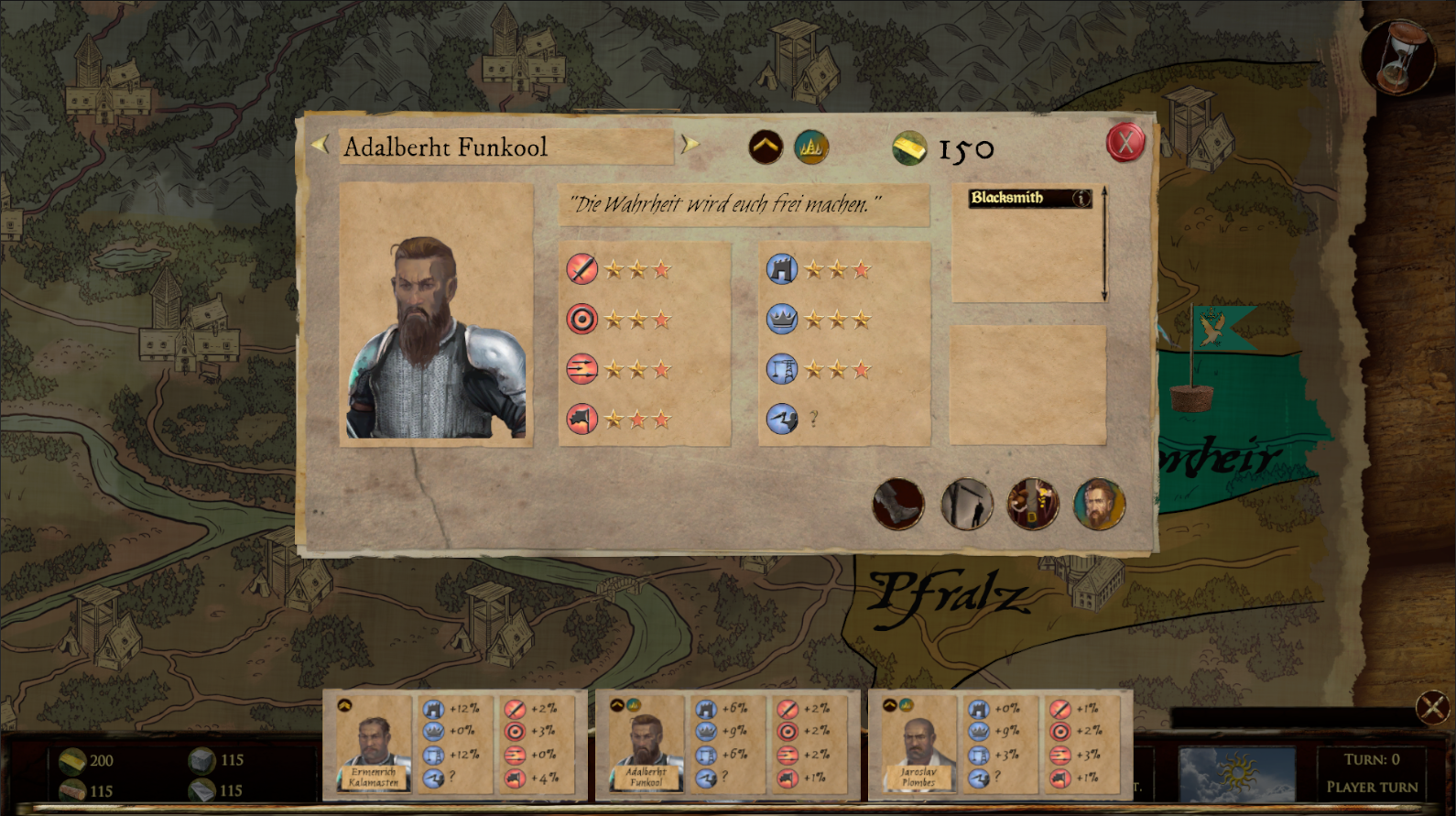 Rebellion: This stat describes how much is a province on fire with rebellion and above all the determine the occurrence chance of rebellious events during a turn. It's a value that changes pretty often, and oscillates according to the happiness and authority stats of a province. It is influenced by a series of more or less controllable factors, including neighboring enemy-controlled provinces and more.

Happiness: Well, what happiness describes it's pretty clear. Lack or abundance of food, high or low taxes and external effects (c'mon, everybody is happy when the circus' in town!) influence this factor, that is, together with Authority, paramount in determining the growth or reduction of the Rebellion in the province. 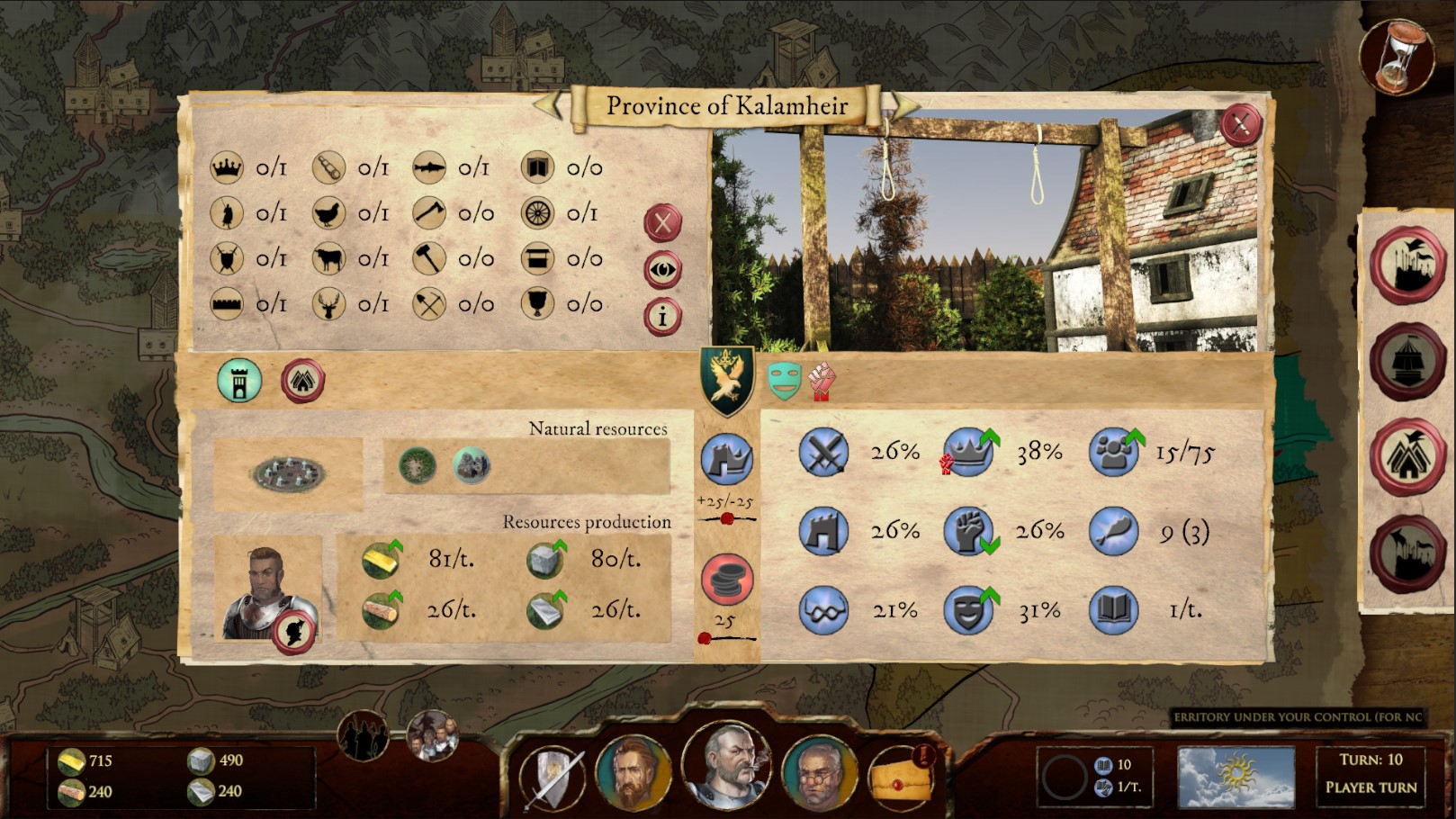 That said, what can be done a bit more in detail in order to influence the factors above:

Authority:
* Command Center and Guards Post assets both provide a bonus to Authority that increases with each tier (1 to 3) of the asset.
* If the province has a governor, his Social skills value sums up to the Authority value.
* When the player choses the balance between Soldiers and Guards in a province, each point assigned to Guards provides a bonus to Authority (up to 25. Worth remembering that for each +1 received by Guards, Soldiers will receive a -1, that will influence both Attack and Defense of the province).
* Move Sarge's headquarter to the province will provide a modifier to authority (Heimer might not be the perfect leader, but he surely knows how to shout loud)

Happiness
* Make sure the food production in the province is appropriate for the population size. A surplus of food always produces happiness per turn.
* Lower the taxes. By default they are set to a value of 25% and can be taken as high as 50%. For each 5% of taxes above 25, happines is reduced by 1% (so at 50% taxes happiness receives a -5%), while if you lower them to 0%, happiness will receive a +5% bonus.

Rebellion, at the contrary, most of the time can't be directly controlled by the player. Its growth or decrease, like said before, it's determined at each turn by the player Authority and Happiness in that same province (no, I will not tell you the full formula, knowing the formulas is one of those things that ruins the immersion IMO). Ah, and obviously during the night turns, Rebellion is higher than during the day turns.

Once we defined the above, we can spend a few last words on the biggest problem caused by high Rebellion values in your provinces: Rebellious Events. 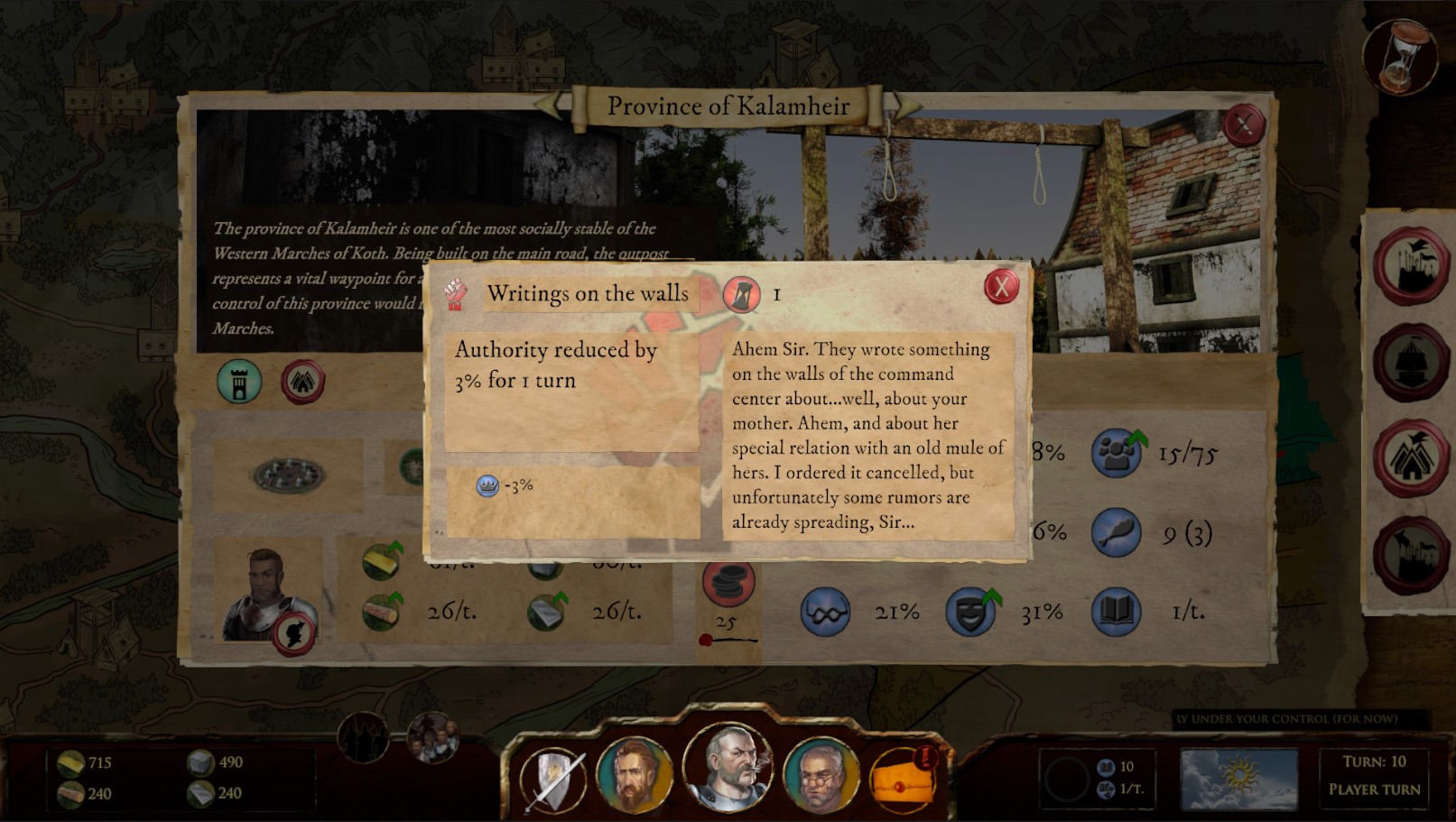 We will try to write an entry specifically about them in some time as the details are many. For now it's enough to say that their occurrence chance andtheir seriousness are directly related to the Rebellion value of a province. They come in 4 flavors, from almost harmless ones like someone drawing mustaches on the statue of the Princess to far less pleasant ones like the hanging of your governor and the burning of your palace.

More about all this in the next entry!
Cheers,
Dr.H, Game Designer