Finished a lot of stuff! A new improved demo, some new features, and a few new classes.

There are a lot of things that have been finished since November. And there is more to come. But, let's talk about the things that there are already finished in this article.

Upgraded the AI schematics to allow AI to take account of elemental advantages and affinity. In this new setup, the AI will compute all possible flow of actions of a single turn while taking account of its personality, AI type, movement focus, action type favoritism, target priority, tag team and elemental knowledge to calculate the final value of each flow. After all is calculated within nanoseconds, thanks to all the necessary variables are already inside data tables beforehand, the AI will always choose the flow of actions with the highest value and enact it.

A new demo has been released with the top two features being added into it. I have also finished some minor bugs and dialog fixes in the demo. In addition, the demo have been changed to allow players to skip character creation if they wished so. Sadly, Linux and Mac build is discontinued to my inability to address any issues those users have with the demo because I don't have any Linux or Mac machine available. 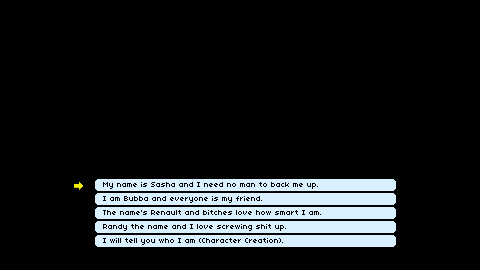 While you can't enjoy these in the demo, there are some new classes being added into the game. They are:

Fullback
This heavily armored fella finally bring his formidable skills to the streets.

Technician
Handy to have when your appliances are broken yet again.

Chemist
A sadistic fucker who use his knowledge of chemistry to screw with others.

Outcast
An unhinged person that nobody want to be caught associating with. The strong BO doesn't help either.

Dealer
Packing a helluva lot of drugs, this guy is every student best friend and every parent worst nightmare.

And that's all for this update. As usual, the demo link is below. Enjoy yourself!

It caught my attention you talking about iniciative dices, maybe you know the original table RPG like me? As dices are not used in desktop anymore (old games used them digitally). As for the linux and mac versions dying out it was expected, windows has far more users, althought linux and mac ones are more passionated and maybe are interested in paying a bit more since they do not have much games. I guess you could add linux and mac if you windows version give you enough money.

I am a regular tabletop DM, and my previous projects also have a lot of tabletop concepts and mechanics bought into the game design, as with this one.

For Linux and Mac, yeah you are right, I won't make a build that I can't support since that's pretty insulting to people who willing to give a chance to my game. I will probably wait until I have the funds to do so first before making Linux and Mac builds again.