As it is with every city, crime is unavoidable in Oaksville, but the situation has gotten worse over the recent years. It was bad enough that most of the wealthy residents have left, fleeing for greener and safer pastures. Without the income or taxes from those people, the city cannot afford to maintain the size of the existing police force. Therefore, with great pain, they downsize the cops to less than a quarter of their previous number.

Without most of the cops, the crimes have increased and the situation on the streets has gotten more chaotic as various groups struggle for dominance. At present, whatever your past and reason is, you have decided to fight back with a group of people dissatisfied with the current situation. How will you fight? Whom will you let into your posse? And what future will you decide to pursue?

That’s up to you, leader. Welcome to Street Posse Showdown. 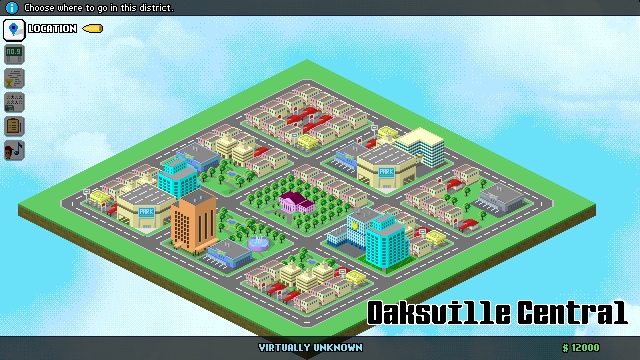 The decaying city centre of Oaksville

No Permadeath. However, Injuries Are In.

Faction Knowledge Is Crucial To Success. 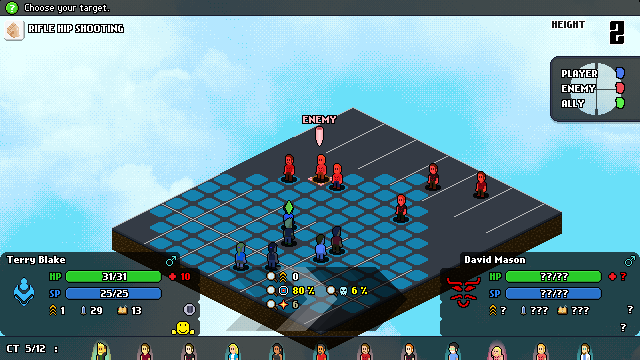 Assault Rifles and the likes are in this game. Train in their use to wreck havoc upon your victims. 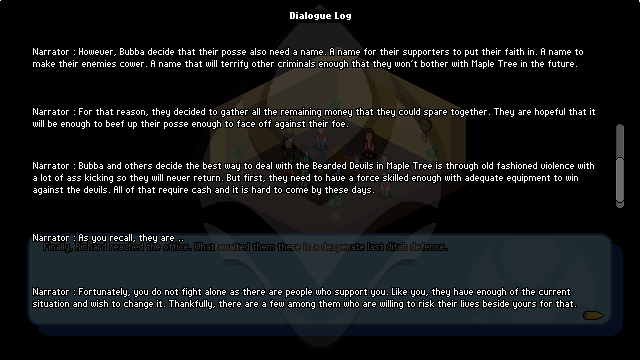 For people with short term memory or strategists.

Thanks for voting and helping Street Posse Showdown on it's quest to become the 2021 Indie of the Year. You are now in with a chance to score some free games. Help this game secure more votes by embedding the widget (or link) we have included below on your favorite sites.

In developing the game, one of the new features of Street Posse Showdown is Activities. To put it simply, all your characters can do activities outside of beating the living shit out of everyone they dislike in Oaksville.

Many activities cost effort and some also cost money to do it. Moreover, each of your character has a number of effort points per rest, to indicate how much activities they can perform. And of course, lazy people get less effort points to use. There are many activities to do and let's delve into them. 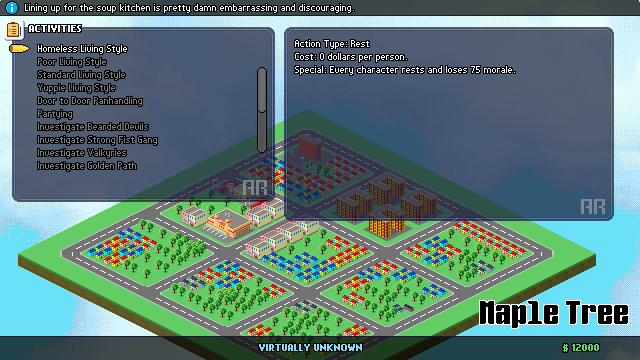 In the past, Street Posse Showdown utilizes a similar feature in other SRPG that after a mission (series of battle and actions) is over, the entire party health, stamina and recovery points are replenished. This currently changes to a resting feature which pretty much is similar to other RPG. To put it simply, your posse need to rest to recover their health and everything else. 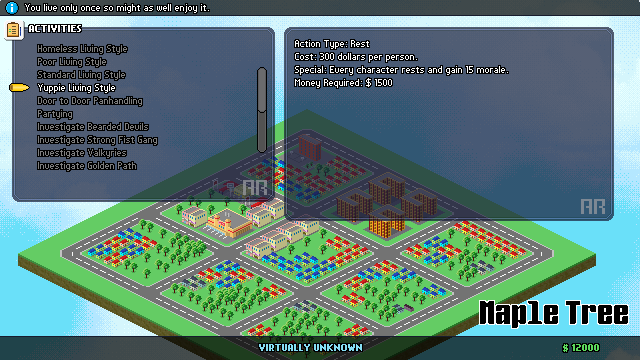 The cost of resting would be decided by the player depending on what he believes the posse lifestyle should be. Are they are homeless hobos dining in soup kitchens? Or are they enjoying life by spending frivolously? The total cost is calculated by the base living expense of the lifestyle multiply by the number of your posse members. 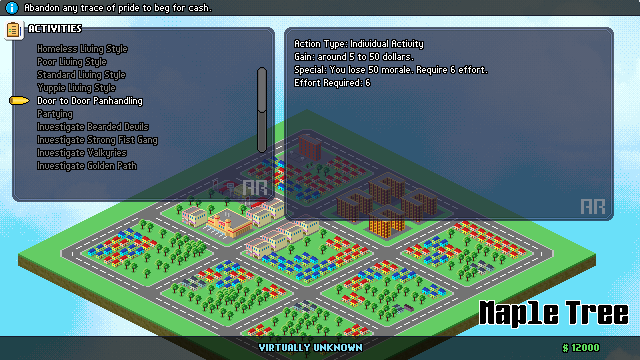 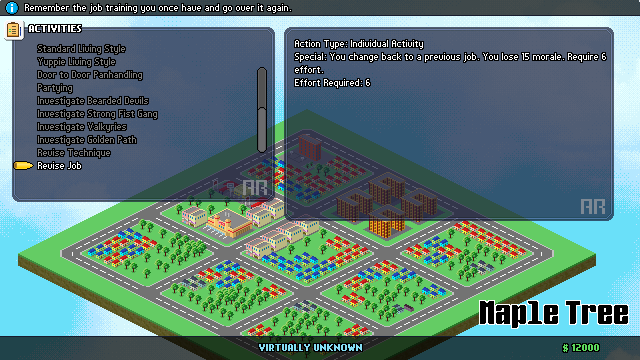 One of the beginning individual activities. As explained in previous article, each character has a job. When your character learns a new job, the old one isn't simply removed forever. The character in question can go back to his old job at any given time, provided he still has the effort to do so. This encourages players to invest job training for their characters and switching as the situation demanded. 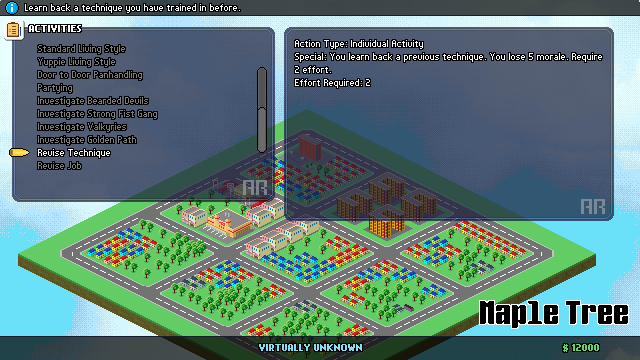 Similar to above but for techniques. Any technique removed from going over the maximum limit still remains with the character and he can relearn it back at any given time. This ensures none of the player education investment on his characters will ever be wasted while removing some of the drastic cost of switching technique loadouts. 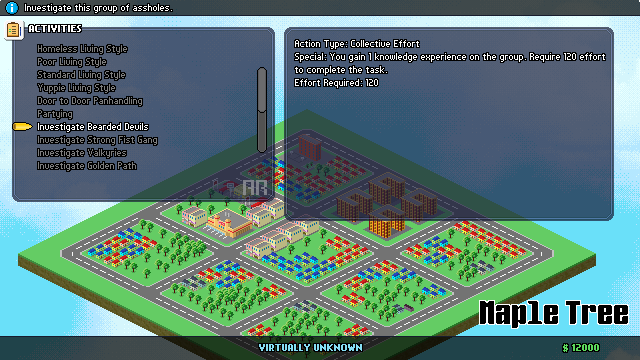 This type of activities involved all of the characters in your posse. All of your characters can pool their effort in order to conduct the activity. Typically, they have a great benefit but the benefit is only given once all of the cost have been paid and not a moment sooner. You usually can do this type of activities as often as you like as long as your posse have some spare effort remaining.

And that's it for this article. I will talk about the new schools that are already implemented in the game in the next article. Enjoy yourself.

Significant amount of changes in the game since the last update. Enjoy yourself reading about it.

Some new features and mechanics. If you are interested, play the demo to experience them.

The game got greenlighted in under a month, thanks to everyone support. There are lot of changes and improvement to the game features so read on to find...

Finally the trailer have been completed. So, I push the game to Steam Greenlight. Cross fingers and hope for the best.

This is the newest demo for the march update. Check the article for more details on what have changed.

Demo showcasing classless system and a lot of other features. Check the january update articles for more info.

This is a Win32 alpha demo of the game. Enjoy yourself.

Hey, just wanted to say I love the artstyle and theme :) I'm working on side-project and it was exactly the artstyle I wanted but due to my lacking artistic abilities and not wanting to hire an artist at this time, settled for full 3D instead (ironic that was actually easier to do these days).

Anyway, just added to my watchlist, hopefully all goes well :)