Posted by CorrectureGames on Mar 8th, 2020

Hey!
A new version will be live in a bit.

Tweaks/minor additions:
- Food requirements rebalanced for residential buildings. Overall demands are now lower, but the highest tier had mistankenly been set to low requirements, so they now have higher food demands (in line what they should have had). Conversely, the fourth tier had very high demands, but now has lower.
- The board of citizens now demand changes to welfare levels and enacting/repealing specific policies.
- Conglomerates can now demand adjustments to the financial transactions tax. Preparations made for hotel tax level demands as well.
- Some minor tweaks in the building information panel.
- Cost and effect of policy adjusted (costs generally adjusted down and effects slightly up).
- Research tool tip now displays description in the text bar at the bottom of the research window when hovering over research icon.
- Fixed wages not displaying in stats window.

Other:
- Polish translation expanded.
- Lighting from street lights improved.
- Fog override fixed so that retro levels have the proper fog color regardless of chosen theme.
- Fixed bridge description being incorrectly mapped in english.
- Reordered some of the production buildings in the menu.

This time around, there aren't that many new additions. I've been putting quite a bit of work into refactoring code and improvement overall performance. There's also been quite a bit of work put into simplifying code so that the upcoming additions (primarily new zone densities, hotels and also ideology-specific buildings) are easier to implement and maintain.

The hydrogen resource now has a production facility. Currently hydrogen is only used in the newly added hydrogen power plant, a pricey, but clean way to produce big amounts of electricity. These two new buildings can be seen below. Also in the picture, the absorbent building has been made smaller so that it's easier to stack together. 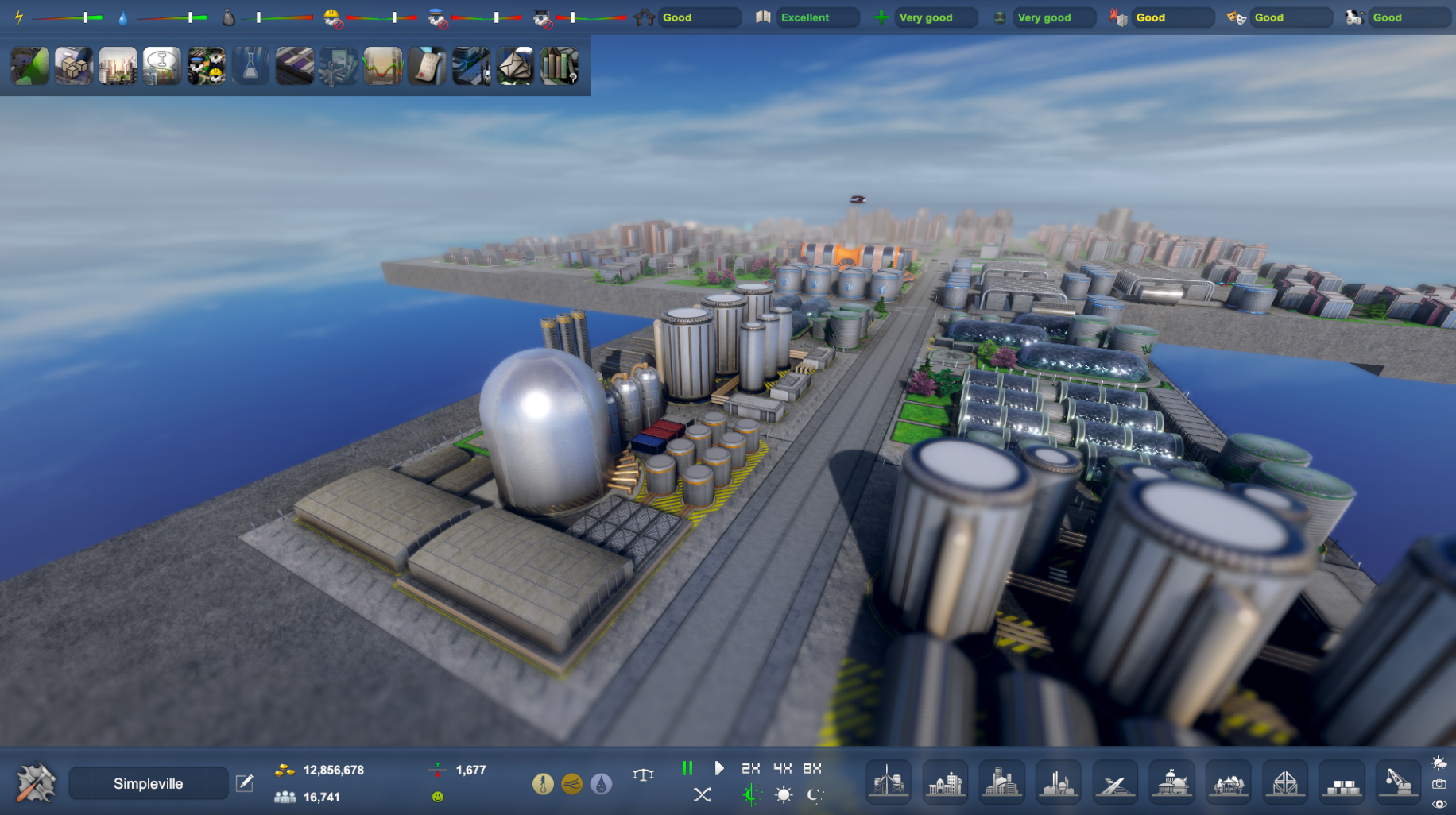 The effector type has been deprecated. This was essentially building type groups checked when placing a new building (good/bad nearby buildings). Previously, when a building had all nearby good buildings and no bad buildings it would run at 100% efficiency. This has now been redone to work in tandem with the local area effects system. Local area effects account for 40% efficiency, presence of all required good buildings another 30% and the lack of bad buildings another 30%. This change also allows being informed exactly of what building is required or is considered a bad neighbor, instead of buildings being grouped. This is a big change to one of the core systems of the game, so there might be some minor unexpected issues. Also, in the old system, each type of building would only be counted once, so having two pollutant power plants near a residential building was just as bad as having one. Now, each bad neighbor is counted, while good neighbors are still only counted once. 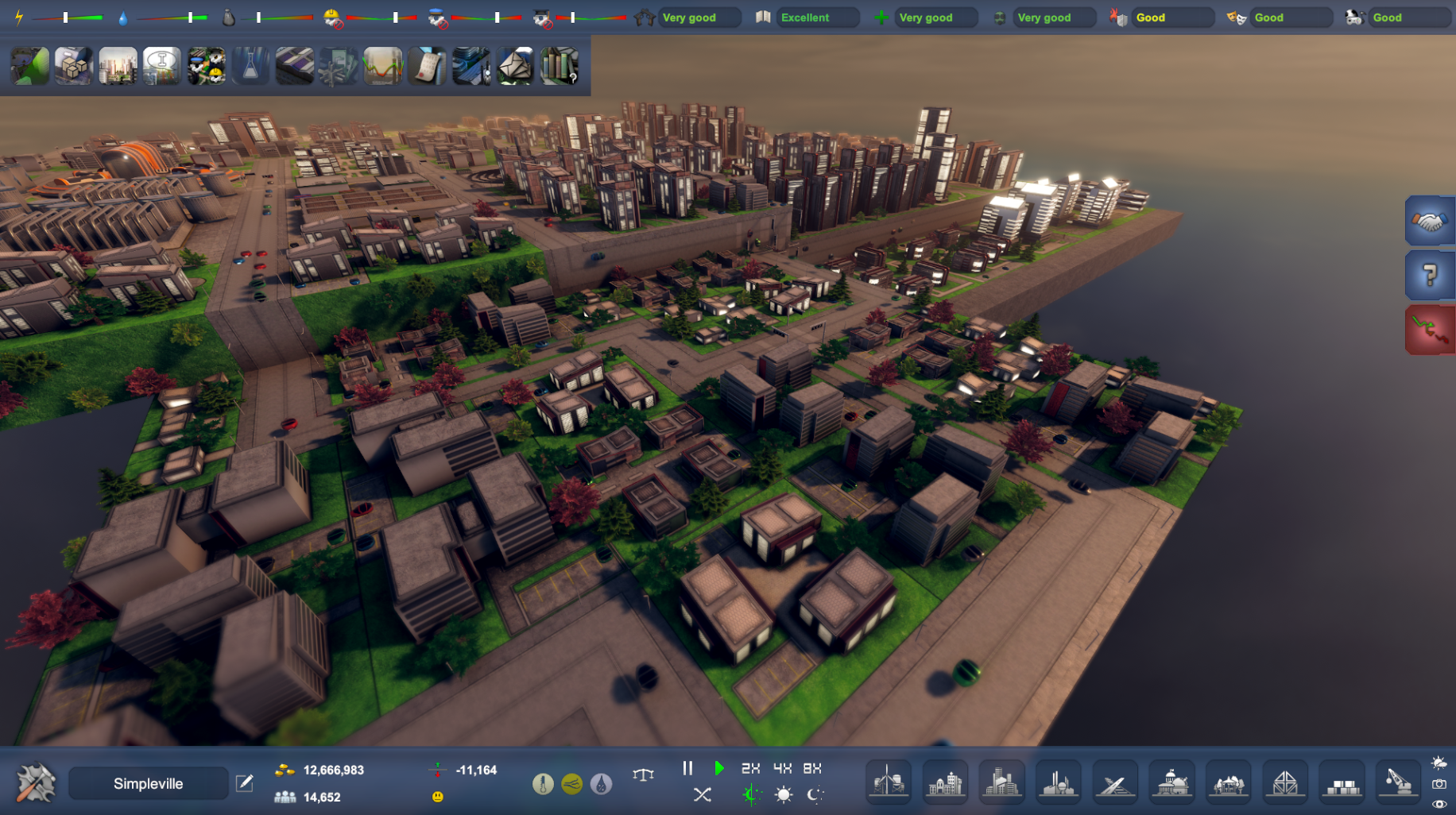 Climate effects have been added. In campaign, challenge and free roam levels, these effects don't affect things greatly. There might be a shorter period when there is less wind which means less output from wind farms for example,but overall, these effects are discrete. They are more prominent in the retro mode levels where the levels are themed. Ruined earth for example is dry, windy and warm, so farms are affected a bit, solar farms and wind farms are a good choices for electricity production etc.

Graphics are currently not a high priority, except when it comes to optimizations, but there are some new building props added, a water tank for example. Street lights now emit light as well. 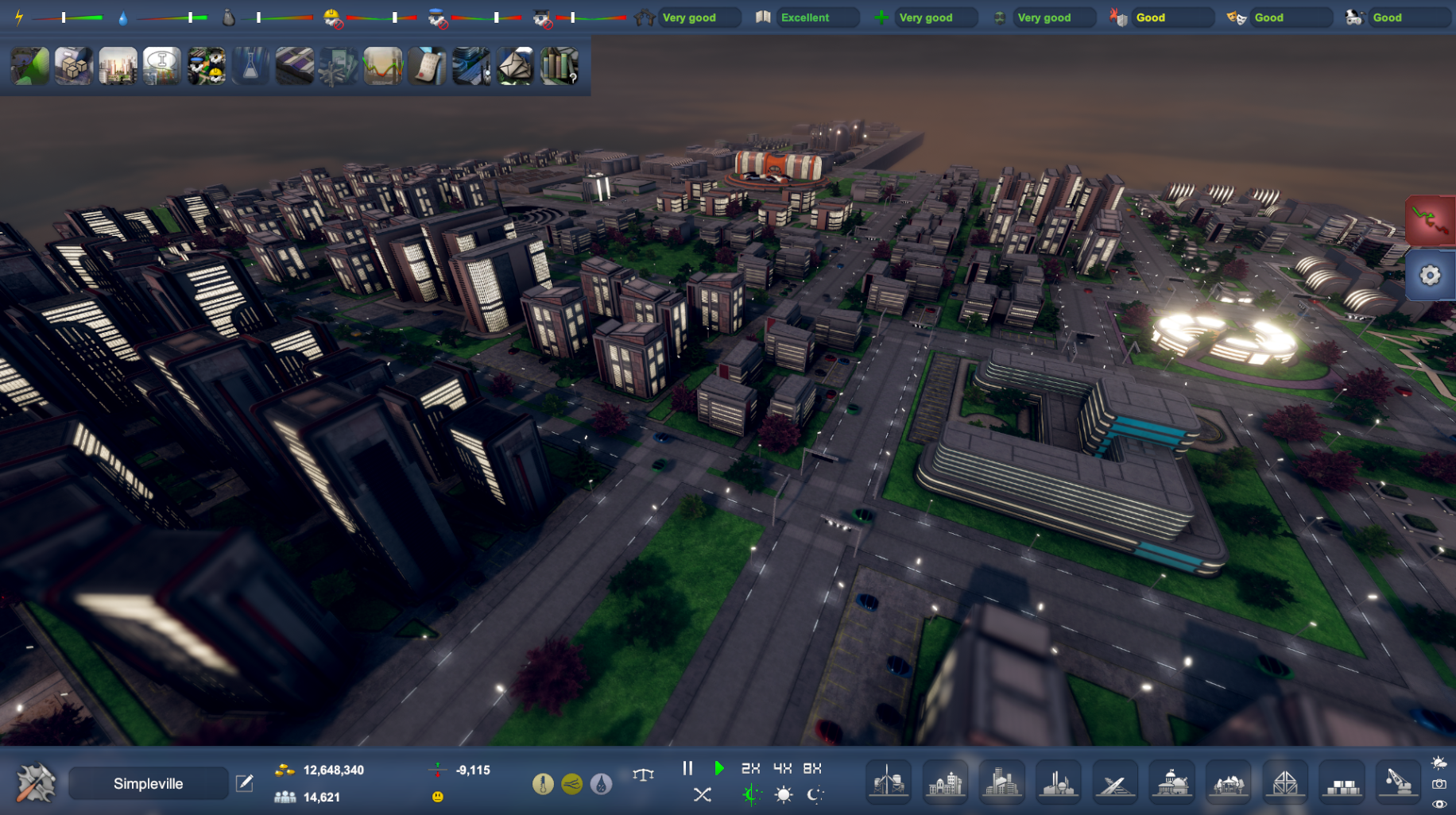 Policy costs and food demands have been tweaked. Since the addition of coffee, cocoa and tea, the food/drinks demands of buildings has gotten rather costly. So I've adjusted most demands down. But in checking through all demands, I noticed the upper class residential buildings were not scaled properly, so they now demand slightly more food than before. The fourth tier on the other hand, demanded way too much, so their demands have now been lowered substantially. Policy costs were way to high compared to their effects, so cost and effects have been tweaked to make them more viable. The citizens now also demand specific policies be enacted or repealed. Keeping citizens happy will prevent them from making too many demands. 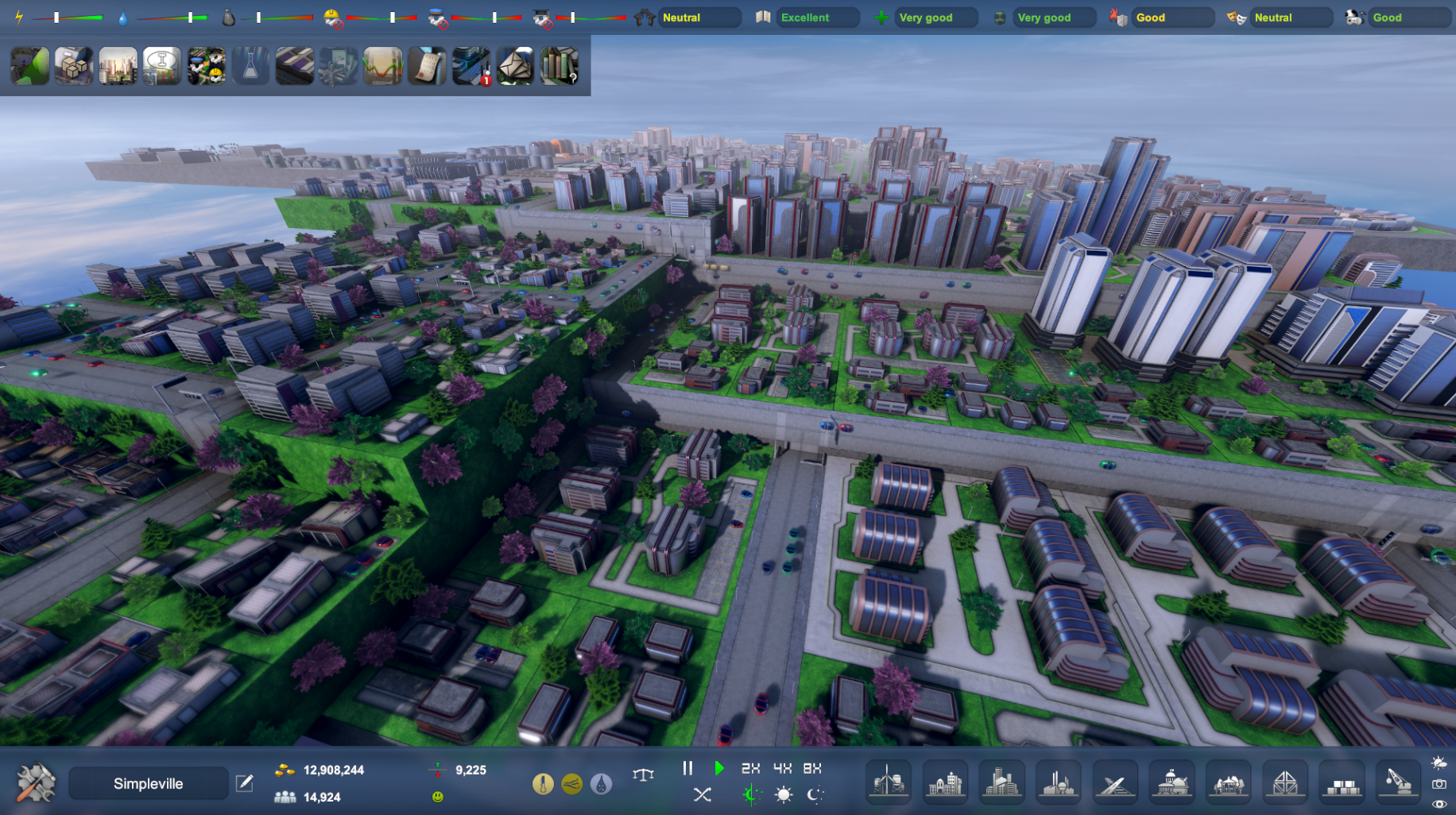 There's been some minor fixes on top of all this, fog having the proper color in the retro levels for example and some other bug fixes (listed above for the most part, but also some really minor stuff aside from those). 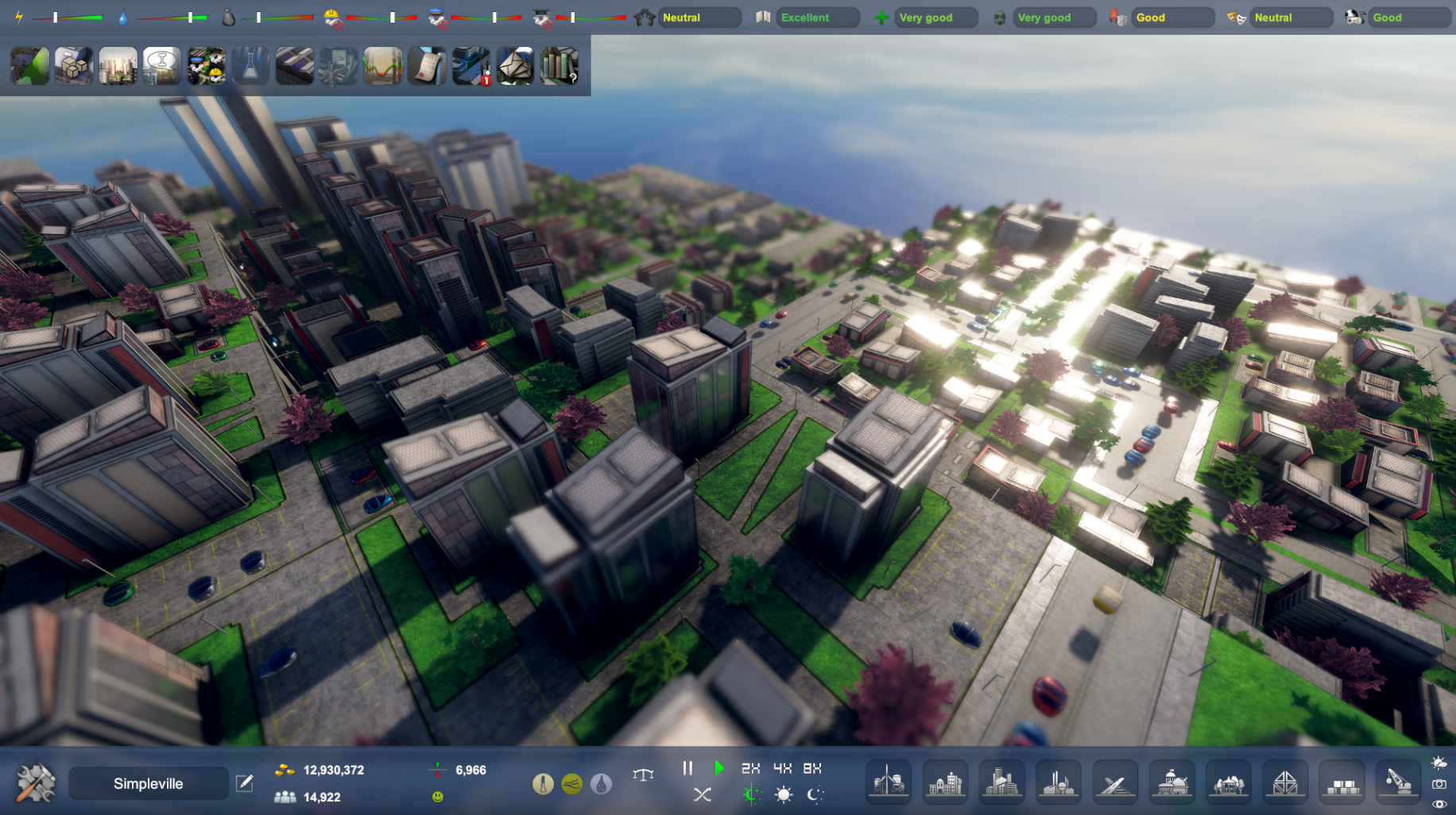 The next update, 0.24, is scheduled for march 22nd or 23rd. Planned for this update is a new controls tutorial, which sadly didn't make it in this time around along with some additional controls fixes and simplifications. I'll also be focusing heavily on adding the foundations for the features listed in the latest road map so that most of it can be finished around summer this year.