We would like to introduce some game mechanic to you that you will see quite a lot in Vagrus. The acquiring and delivering of news across vast tracts of wasteland, another crucial game mechanic is a system of Rumors and the last is that you will come across many people who want to get from one place to another on the broken continent of Xeryn. 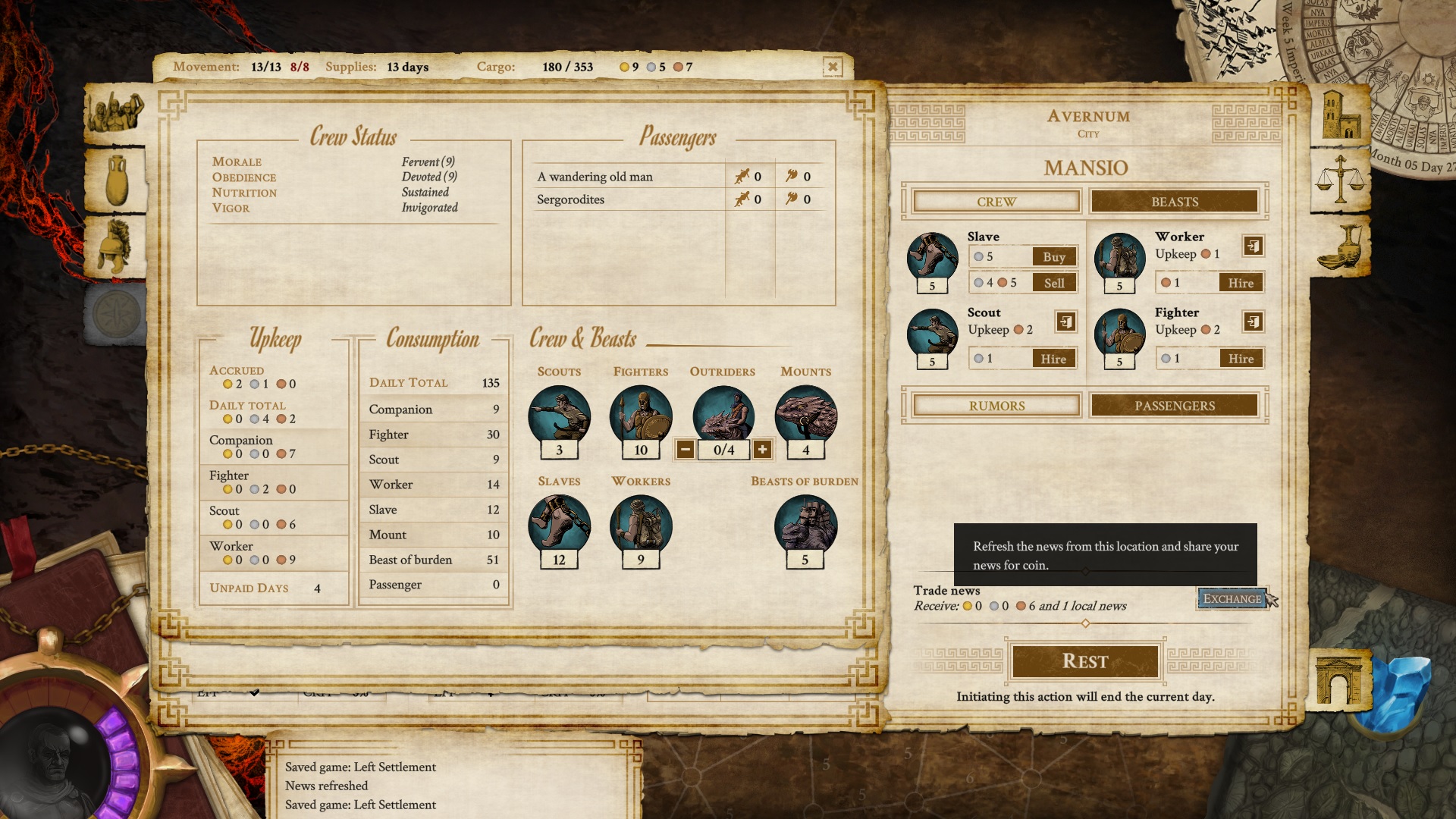 News are tied to settlements: each settlement, however small, has its own News entry. You will acquire the entry for the given settlement when you enter the mansio in it. Alternatively, if you already have the entry in your Journal, it is reset to the freshest state when you enter the mansio. Sometimes you can also find News entries through Events as well - these often give you entries from faraway places.

You can deliver news by turning them in at the mansio in settlements. Doing so will grant you coins depending on the number of entries, their freshness, and your current distance from their source. Note that News entries are not lost when you turn them in but you can not turn them in at that settlement again for a while. Entries can only disappear from your Journal when they lose all their freshness (but this can be reset by acquiring that same entry again).

The Value of News

Each News entry is slowly becoming less fresh and thus its value is constantly degrading. This is balanced by the fact that the farther the source of the entry to the turn-in point, the greater its value. Single entries are worth very little but turning in several in as many places as you can, you will gain a constant and fairly reliable side income. Yet you will not be able to sustain a caravan only by taking news between settlements.

How to Use News

All the above results in a system that encourages planning journeys ahead and including as many settlements as possible along the way as well as getting to them as fast as possible. This means more News entries plus more deliveries and thus more income. Yet the mechanic is non-intrusive and works mostly automatically, rewarding players who plan ahead. 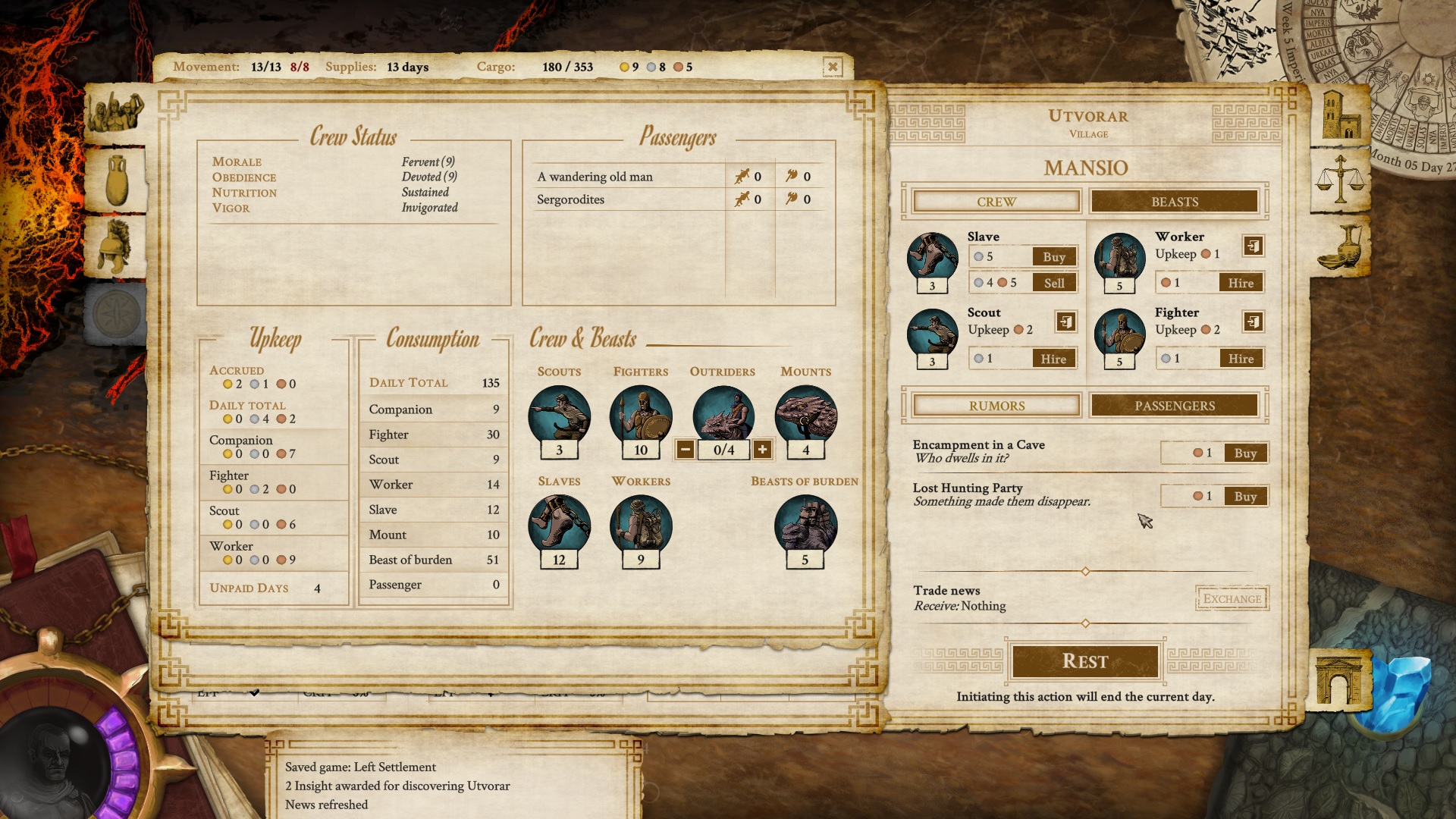 Rumors can be found in Events sometimes or can be bought in settlements (in mansios, specifically) from a semi-randomly generated list. You will be able to discern from the list what each Rumor can grant you but not the specifics. We are still tweaking the way they generate but a certain randomness is going to play into it, so expect to rarely see the same set of Rumors in different playthroughs.

There are several types of Rumors we are planning to add:

Unlocks a Chart Item
This type of Rumor unlocks a settlement or point of interest location on your Chart. Apart from running into such places by wandering around, this is the only way to discover map locations.

Provides Information on a Storyline
This kind of Rumor points the player in the direction of a potential storyline or quest and gives hints on how to initiate it. Though the text is short, players may have to consult the Chart or explore a bit to find the exact place.

Provides Information on a Settlement
Information on a settlement's trade opportunities (what goods sell there for a good price), unique inhabitants, or important characters (such as the rare blacksmith or a powerful mage). Some of these might end up being generated to match the ebb and flow of markets around the Empire.

Gives Information on Encounters
These Rumors inform players about the dangers of a certain region or even provide hints on creatures and their habits that dwell there.

There might be other types added later but these four we would certainly like to appear in the game eventually. 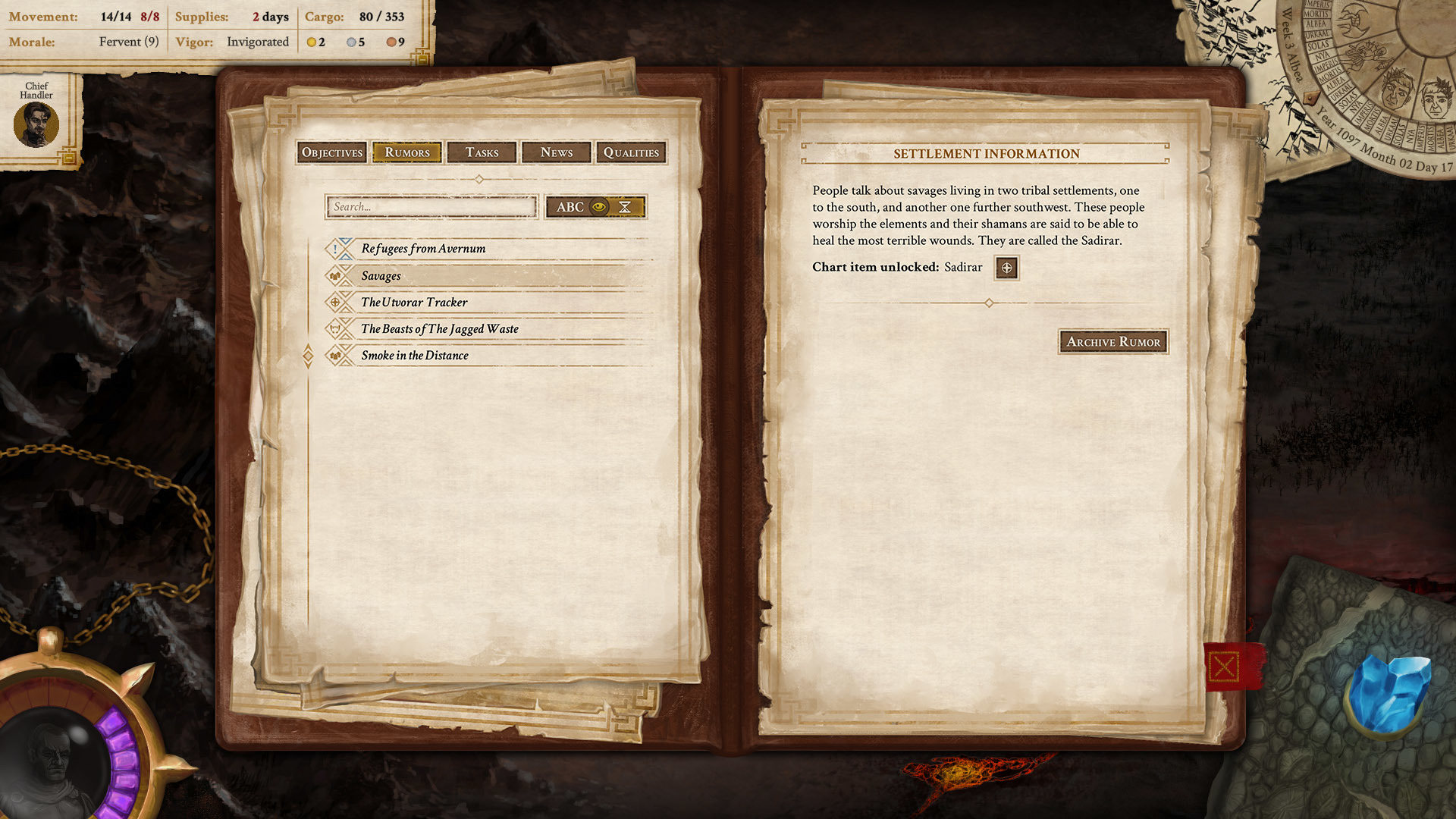 In order to avoid keeping track of a huge amount of already obsolete Rumors, players will have the option to 'retire' a Rumor, that is, to move it into a searchable archive section of the Rumors list. This will be necessary to do from time to time for transparency's sake.

We feel that Rumors will play an important role in how players manage their goals and objectives, as well as in the way they explore the unknown and perilous reaches of the Riven Realms, so we will most definitely keep expanding on the concept as development goes along. 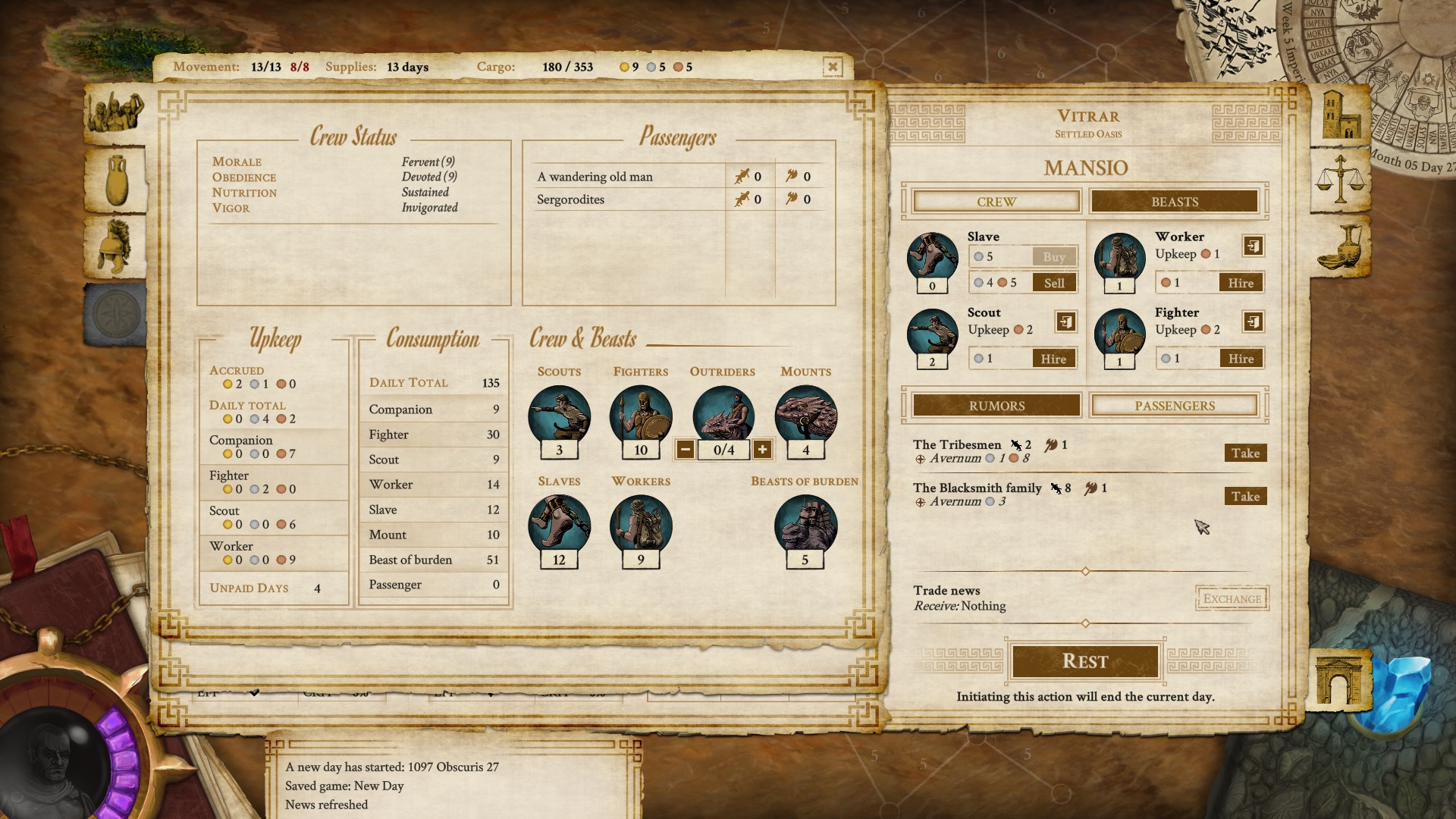 Those who that do undertake journeys often pay comitati such as yours to take them where they want to be. In-game, this provides an optional source of revenue to help you keep afloat but one that requires you to plan your path ahead considering several factors, including where your passengers wish to go and how long you have to deliver them there.

Passengers are available at mansios (and are randomized) or sometimes in events (where they are specific). You do not only have to feed them on the way but also have to protect them as attacking monster or outlaws can easily slay them. Mind you, some of them can even give you a hand in defending your comitatus (more on that later). 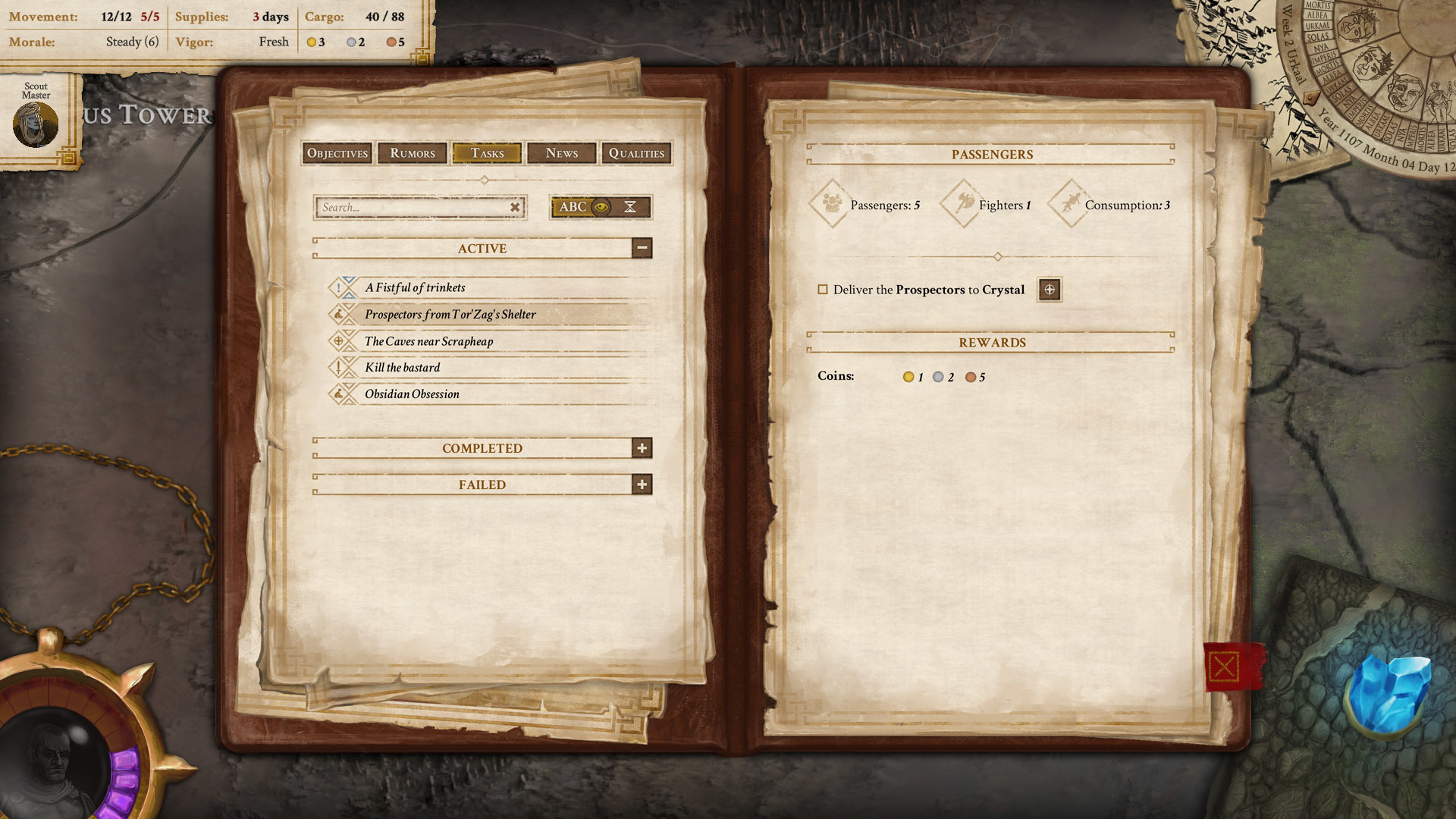 You can see the statistics of passengers related to crew on the Crew Pane, while other information can be observed in your Journal (redesigned to include a Passengers Page).

We feel this system adds another layer to planning and risks during travels in Vagrus, one which also has the potential to tell tiny stories of people who risk a lot by venturing forth with you.