What is Battle Of The Realms - The main concept and much more!

Posted by WarPenguinStudios on May 30th, 2016

My name is Scott Canavan, I am a solo developer from the UK, today I want to show you the game I have been working on using Unreal Engine called Battle Of The Realms. I hope the ideas and concepts I have come up with are interesting. Let's talk about what Battle Of The Realms is.

The main ideas and principles for the game will be an open world role-playing game with a medieval/fantasy setting. There will be three alliances with each player choosing an alliance to join or choosing to go "freelance". Freelancers can become mercenaries, freelance merchants, freelance crafters and so on. Each alliance will have several player created guilds, who, over time, will have their own fort/village. Each guild gives out daily and weekly tasks and the guild members achieve these tasks together (E.g 1000 wood is required by next week to finish off the fort structure). When goals are completed the guild and it's members are rewarded by the alliance. Guilds can declare war on other alliance's guilds and there can be several guilds involved in a war. Players can hunt, craft, build, kill, deceive, even develop mercenary clans and be paid riches for fighting someone else's war. 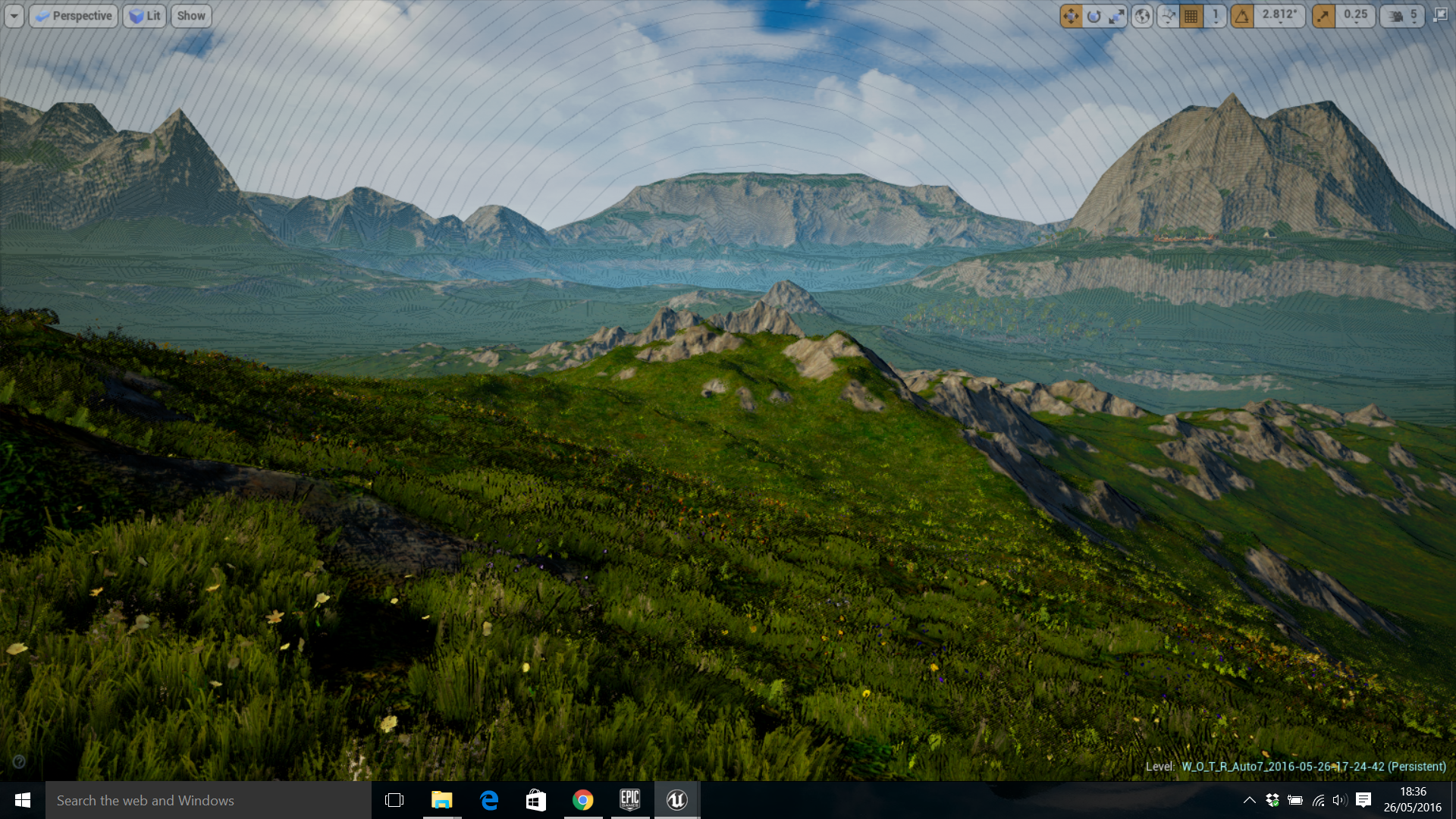 Although there will be no quests as such, as the player is dropped in a world with nothing more than a sword (depending on you class). It is up to the player to progress in the game and set their own challenges. If a player is within a guild their expertise will come in handy (fighting, crafting, resource gathering levels) and they can be set individual tasks as well as the guild group tasks. A player who started early by increasing their crafting rank, may become the guild's expert craftsman for 40 people.

The player sets their own path from the very beginning. Firstly, they choose their starting class; this is a work in progress, but at the moment they will be Warrior, Mage, Cleric and Archer. The player will then choose their starting alliance or they will decide to go freelance. Whether or not a player chooses an alliance, this does not restrict them to this faction and they can leave or move between alliances and freelance. For example, a player may join an alliance and become a very experienced resource gatherer. This player realizes the worth of the materials he is providing for his guild (due to rarity or resources left), he decides to leave his alliance and guild to become a freelance merchant. He then roams the land going to each player built fort and village setting up merchant shops to sell his goods. Each player carves their own path; but each player's actions can affect the rest of the game. 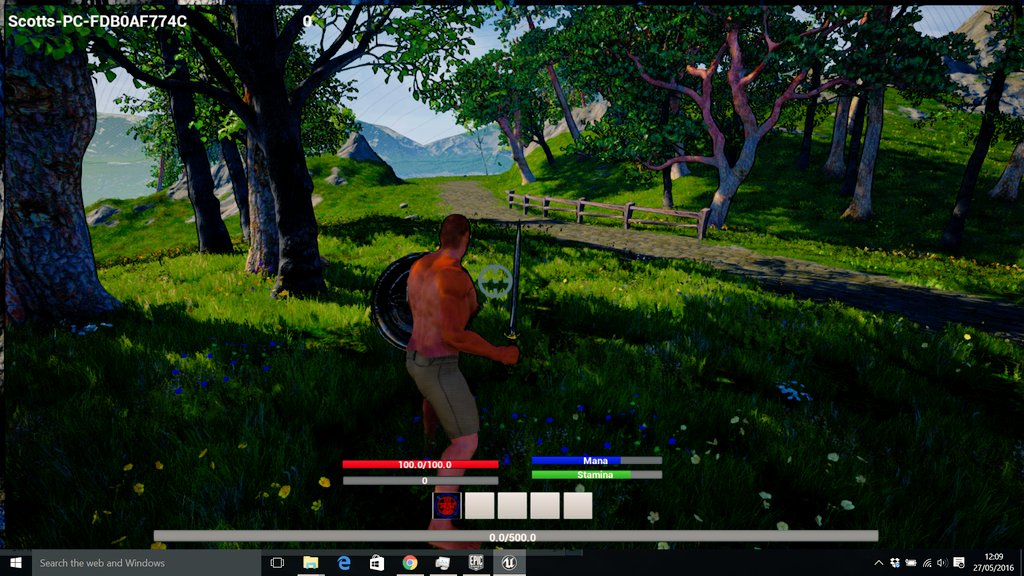 I have uploaded a video showing the basic combat system at present. I have set up the player in a third person camera and made it so that all combat is free-aim. This means there will be no target locking. This allows for more dodging of attacks, and also a higher skill base to land strikes/magic spells. 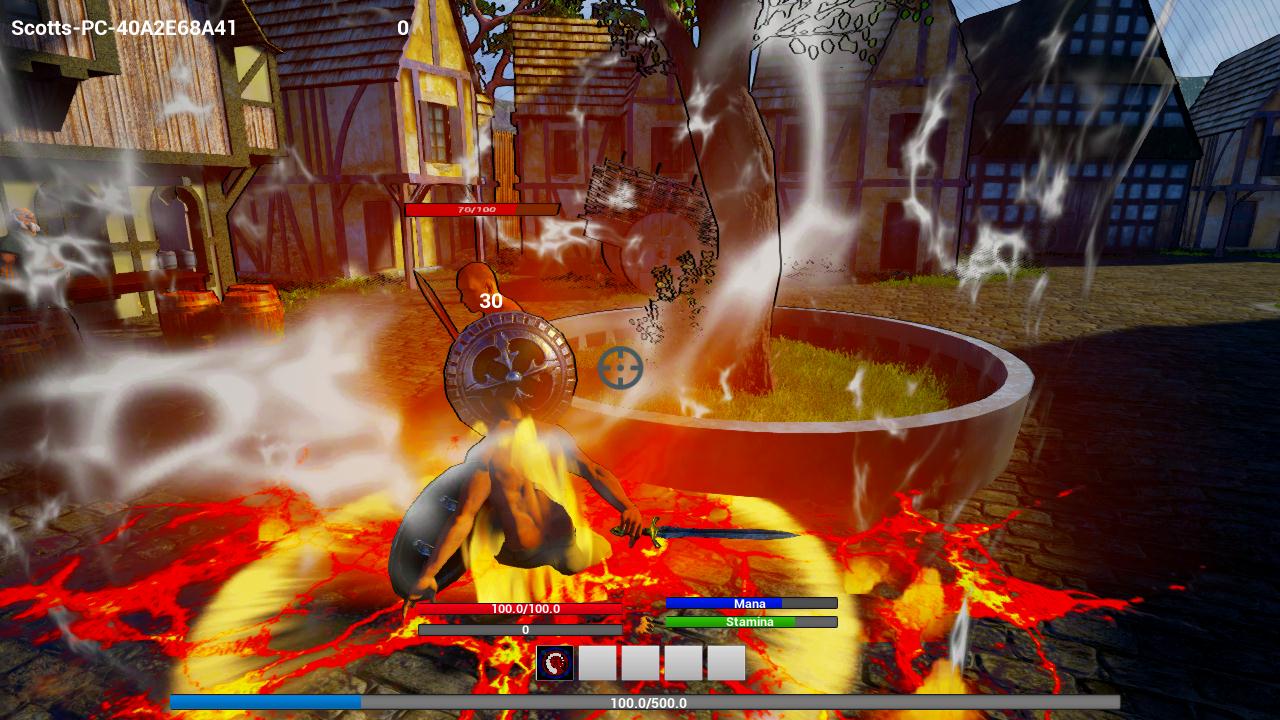 (Slam attack by the warrior)

The economy within the game will be player driven; either by player to player trade, guild to guild trade or through market stalls set up by players.

***WIP*** Resources will be plentiful in the start, however they will reduce over time (trees will grow back) this causes players and guilds to manage their resources responsibly; but also adds another level of depth in item pricing and economy (For example, iron resources deplete and merchants begin selling iron products at an increased price, due to their rarity). 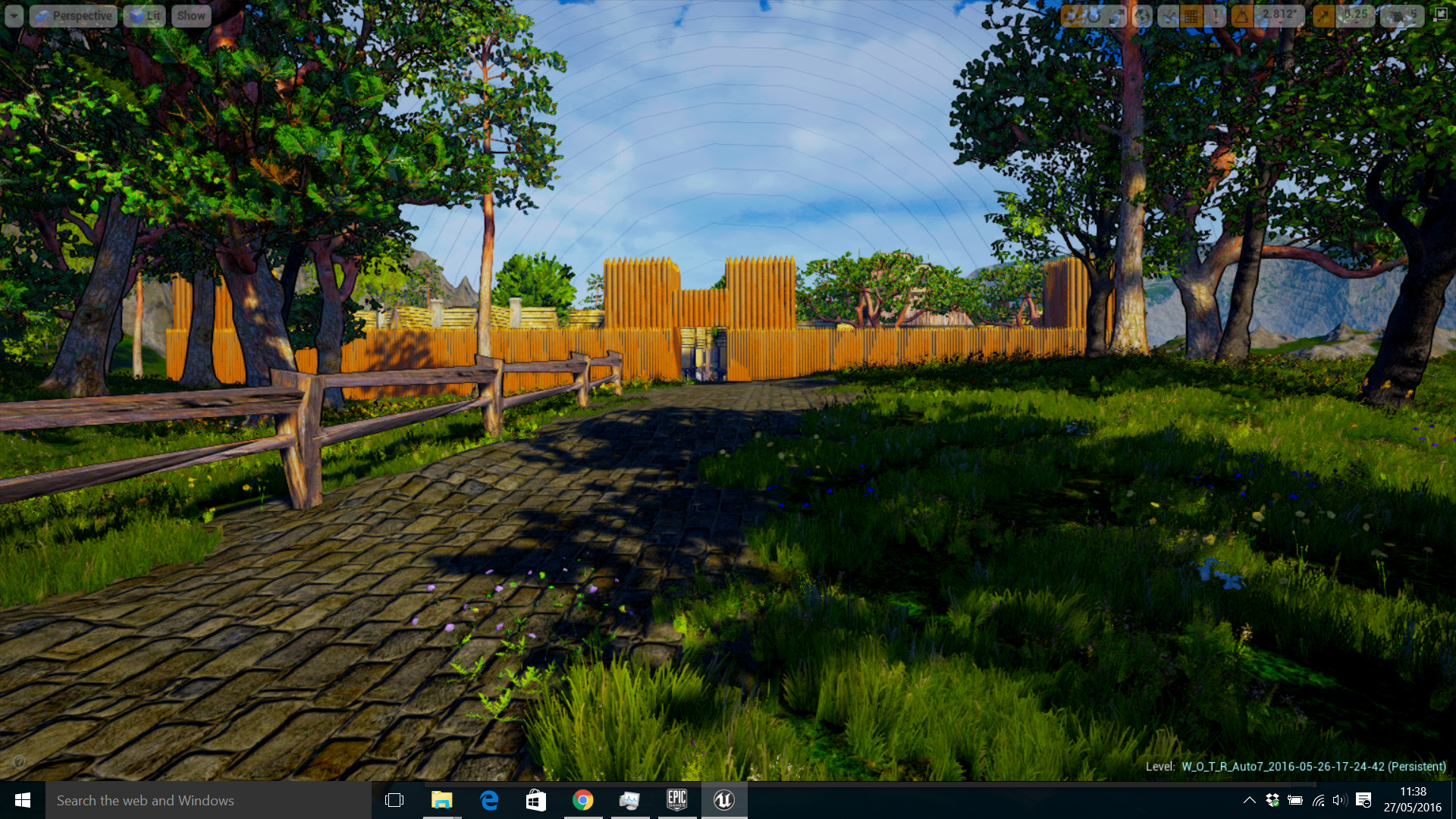 I have chosen to use the very powerful Unreal Engine to build my game. This has proven to be very efficient in what I want to achieve. Originally, I set the visuals to be a more realistic setting; however, I decided that in order to better suit the style of the game, I would change them to be a more stylized look. Unreal Engine has accompanied this change with ease. 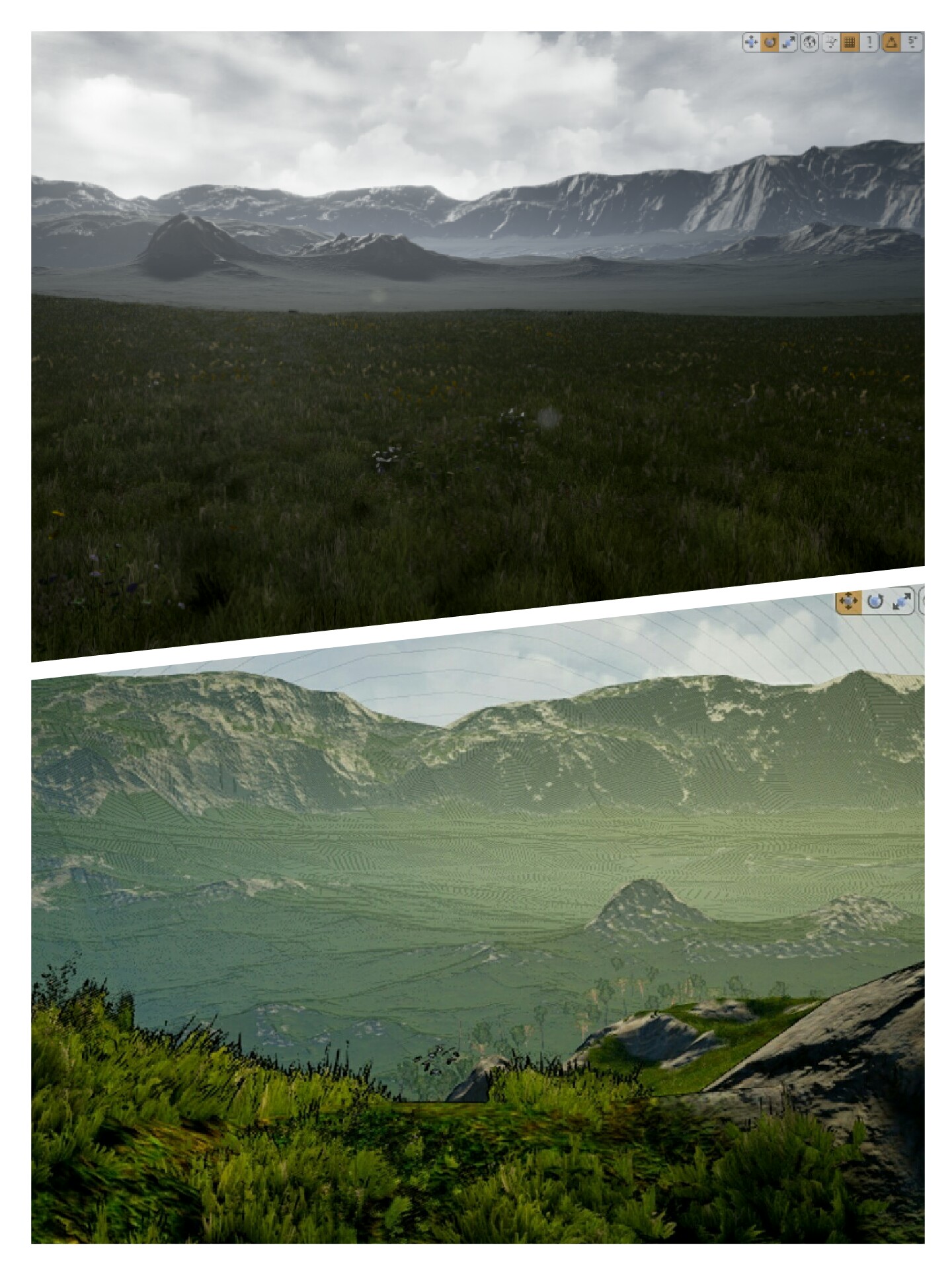 Please comment below! I would love to here your thoughts on the game!

Wow, I'm the first one to comment :)
Ok so, It's great to see someone chasing after their dream and just start like you stated on your blog! This game already looks better than some other games that have been in development for multiple years.

Nice Concept! The combat is solid and the graphics are nice, the stylized cartoony-look may be something that you can expand upon and go full toon style - I think this wouldn't make the game any less appealing! The main focus being on the players is something that really amazes me, I'd love to see living in a village founded by me and some friends!

A thing that i have some questions about would be the guild/village system: Are those two connected or are they seperate things like, e.g. i join a guild and this guild is in a village, does this village belong to the guild or is it the other way round? Or are they completely seperate from each other?

At the end I just have to say: It's great what you're making here and I'm defenitely tracking this game.

PS: I'm german, and although I'm not that great in Game Development, I could be of use with the translation, to german, that is ^^. If you need something like that I would be honoured to help you out.

Good morning, the reply to this message is below, I must not of pressed reply when posting it

Thank you very much for your comment and support it does mean a lot.. It was only a couple of days ago that I had no idea how to approach making my work known! Ha. I'm currently in the process of experimenting with new handpainted textures to create a full toon style :) I prefer the cartoony style over the realistic version.

The way I have it planned it out, a guild will own a fort that they must build and upgrade. Near to each fort, guild members can build their houses to make a guild village (belonging to the guild). A clan (a group of players either of the same alliance, but not in a guild, or freelancers) can build their own buildings to make a village. For example 5 freelance players are friends and decide to be mercenaries, they can build their houses and set up a mercenary board to keep a look at the latest jobs they can accept.
A single player without a guild or a clan can only build simple shelters for basic protection/storage.

There is alot I have missed off this update that I want to implement first before releasing, such as bandits attacking trading carts in transit etc.

Thank you again for your kind words it means a lot. I am making this game in my spare time when I'm not at work and in the near future I may take you up on your offer.

If you have any other questions let me know and I appreciate your support.

Got you, I'll spread the word of the game, everyone needs to know about this ^^. Anyways, thanks for the answer, if i have any questions I'll just ask, and if you need translations, then just send me a message :)

Thank you very much mate, ask any questions you want I will always be free to answer them :) and don't worry if I need your help I'll be in touch :)

Interesting game idea here, and so far good job. Though how/when do you expect to finish this as a one man team?

Thank you! :) honestly, I couldn't say.. I've been working on this since around February/March. My original aim is to have an early release by next year, but I wouldn't want to promise that. I would want to expand the team making it in the near future though.

Thank you! I'm currently working towards getting a demo working (probably a combat demo for feedback). Then not long after hopefully released early access