On last week's Devstream, we talked about Bunker Bases, which are forward operating bases that are built directly into Bunker networks. Our goal for the Bunker system was to give players the feeling that they are designing their own underground bases, with custom layouts and modifications. Since the new year, we've been tinkering with various designs, trying to merge theme and functionality.Our initial visual references pointed to the entry points into the Maginot Line in France and doorways into abandoned underground storage facilities. You can see some of these references below.Functionally, we had several requirements. First, the base had to be upgradable from an existing Bunker network, meaning it had to occupy a single Bunker segment. Second, it had to exist at the outer edge of a Bunker network so it could be supplied by Trucks and other logistics vehicles. Our first attempt at a mockup can be seen below. 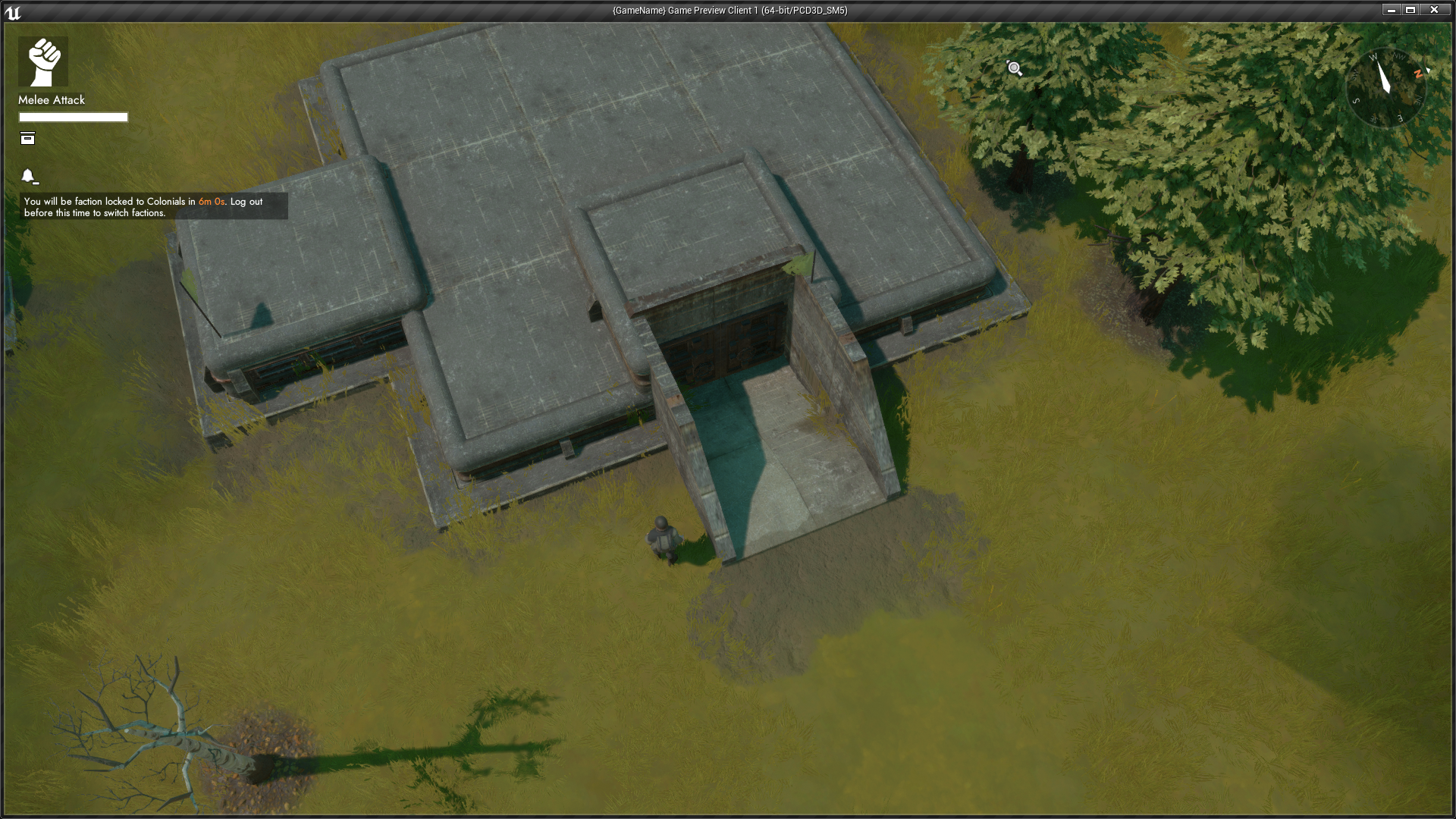 We implemented this mockup into an initial prototype and did some playtesting to see how it felt. Thematically, it met our expectations, but functionally it was missing a few things. First, we immediately wanted to be able to walk down the ramp and enter the door at the front. We weren't able to do that because the door was just a prop that did not open. It was meant to convey the notion that there was a "stockpile" hidden behind the door. If we opened the door and allowed for passage through, the immersion would be broken. Second, we felt like wanted to be able to spawn at an advantageous position for the purposes of being able to make a last stand.We went through several iterations, but in the end, we settled on the version below, which allows for passage through while moving the "stockpile" facade to an underground hatch and 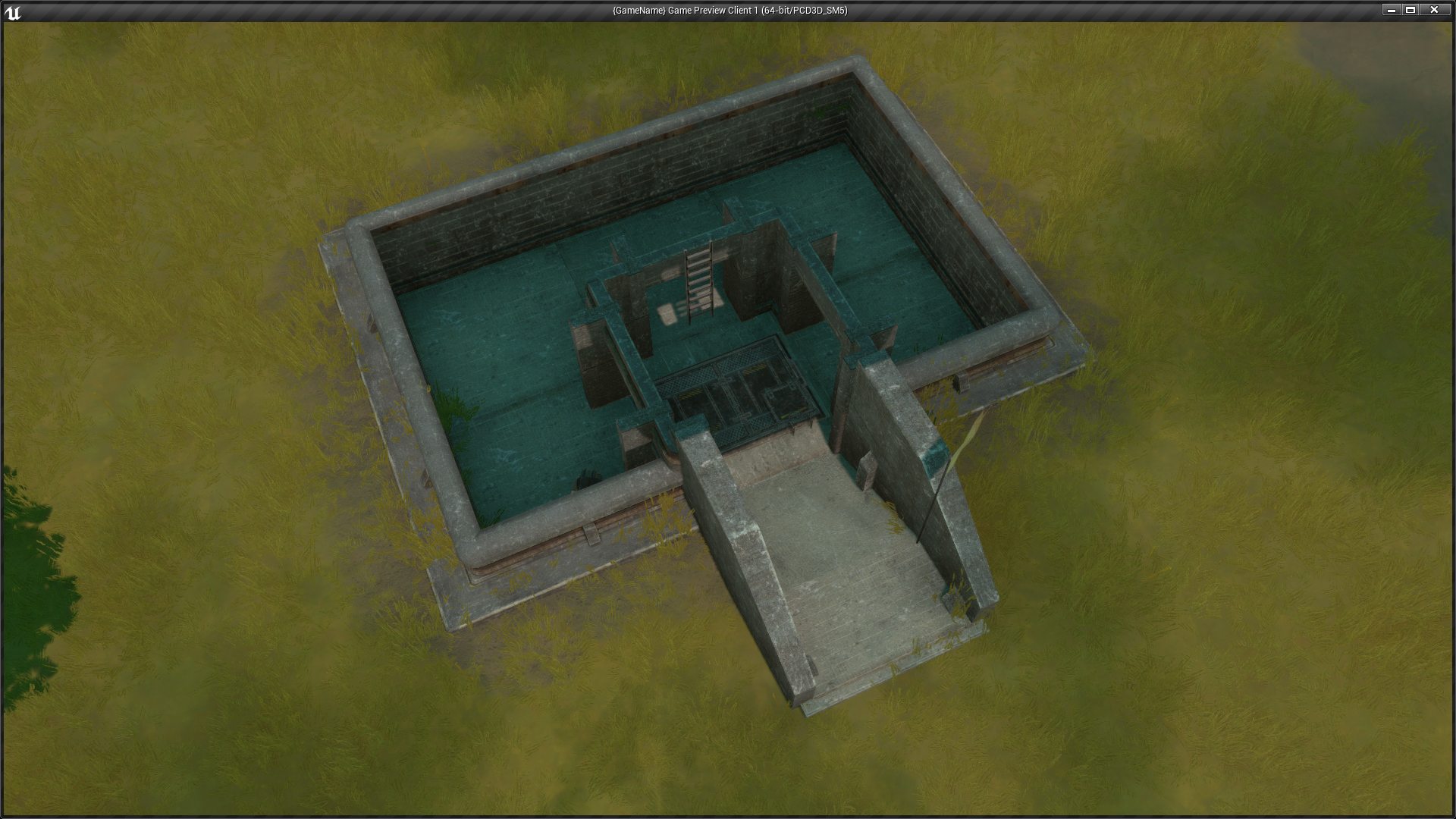 This version also provides a "crow's nest" at the top that's accessible via a ladder. Players will spawn at the top so they can be at an advantageous position during a siege. 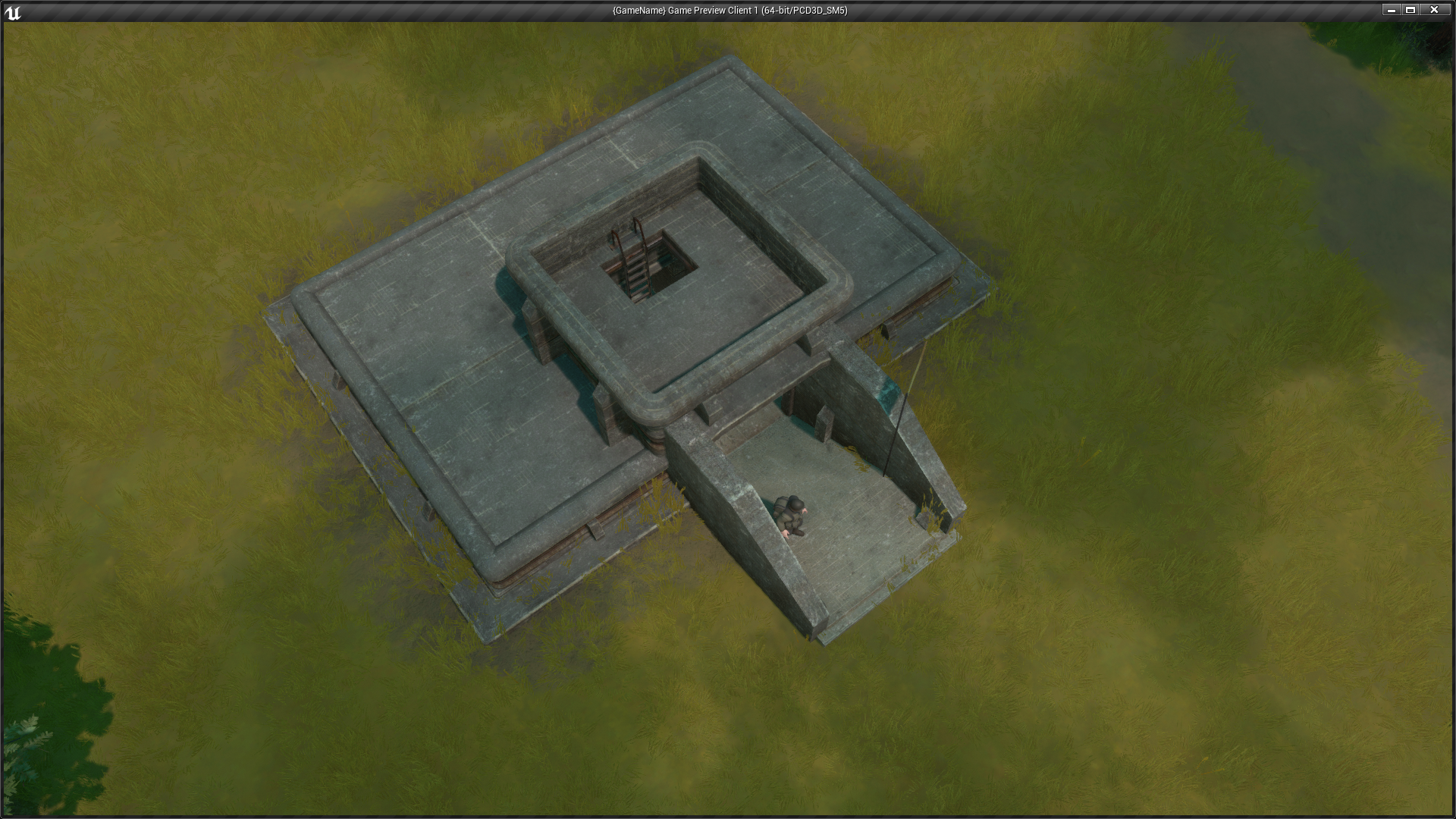 There's a lot more to reveal about Bunker bases on the next Devstream. They are soon going to have a huge impact on the outcome of wars. Stay tuned!

@MattI heard you like lore.Let's face it, that old lore screen—even when it was given a bit of a facelift—isn't exactly the prettiest screen. It's hard to read, it's kinda small on screen, doesn't exactly fit a lot of text. Not to mention the fact that it took over three years for us to add line breaks. Did you know that adding line breaks to was, ironically, a single line of code?When Phil and I finally brought in the line breaks, it became painfully obvious there was tons of room for improvement in the user experience.

This is an example of what our very first 'lore screen' looked likeWe knew, at some point, if we wanted to include something like A Chronicle of Ashes in the game, our current delivery system wasn't exactly up to the task. On top of that, Adam and I have talked repeatedly about how cool it would be to add little animated or interactive lore pieces to create a deeper connection to the world.

Naturally, when we talk about expanding what's possible, there are millions of different ideas. A few that didn't make the cut (at least yet!) include lore-focused item flavour text. Faction specific items. Detailed 3D models on a turntable. Camera zooms. A catalogue of all the pieces you've found and oh so many more. 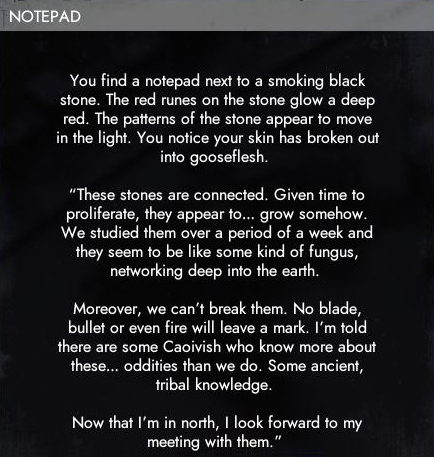 The Current lore screen in-game as of this writing.As I talk about a lot in these dev blogs, you can't always get what you want, but working within limitations is key to success as a game developer. With that being said, we did, in fact, make a few changes.First, let's talk about formatting.Glory be! We have formatting. Here's our general mockup for what each part of the new lore screen represents. 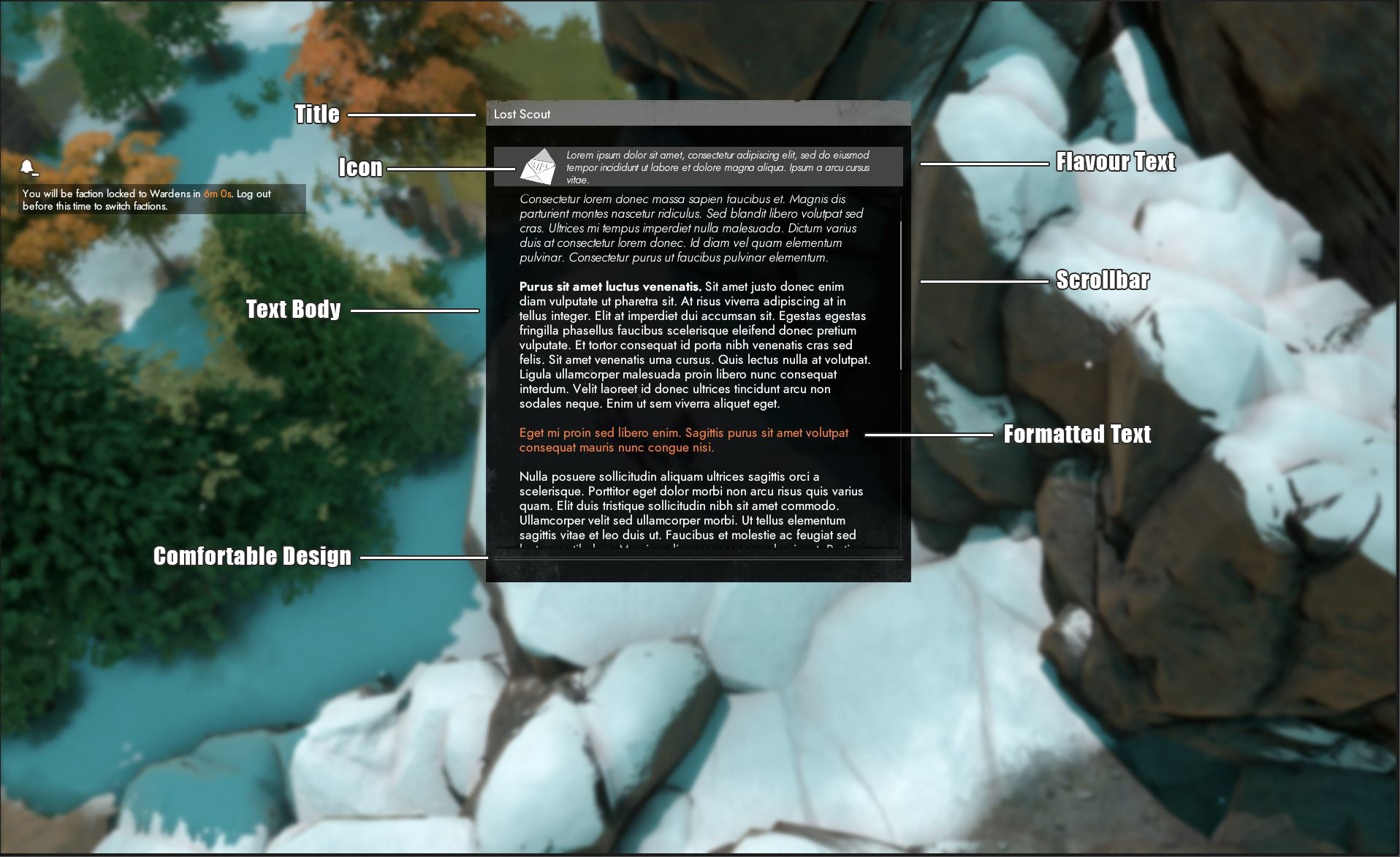 Our new lore screen, coming in a future update.This is the new standard from now on. Giving some more contextual information and better organization will hopefully provide more clarity to individual lore pieces. On top of that, there's also no longer a text limit. Previously, you would find pieces that would be cut off by just a hair on one side. This is because the frame clipped things slightly in the editor than in the live game. NO MORE! Now I can use as much text as I want! (While this is not strictly true, the limit is dumb, and I'll never hit it.) Next, we've added the ability to trigger animations, visual effects, and sounds. Here's a mockup of how that might look.

I'm sure if you're like me, you're thinking of all the different ways this could be used. This coffin animation is probably the simplest example. Have no fear, the mad bastards gave me an event hook, so I can script anything I want after that now.There's one catch, it can't be a permanent change to the world. These effects and animations will only occur on the client. However, we'd like to make that happen before 1.0. It would be awesome if some objects held a permanent state in the world.Did you know, I manually set each lore item, in the world, in the maps? It's really not the most optimized way to work. In the past, I'd have to save and check-in a map simply to fix a typo. This is bad. Map changes should be done only when you need to make a change to a map, not something as trivial as a spelling mistake in a lore item. They can break easily, and there's no way to compare individual changes from one file iteration to another.

Lore will be organized in a manageable list and won't require us to save a map to change the text. So, we've compiled all lore entries into a list that's referenced by readable components in-game. I'm happy with past-Matt for cataloging all entries by number because now I can put that organization to use.With that, I hope you enjoy this look into reformatting the lore screen and the thought processes behind it. There's much more we'd ultimately love to do, but this first step is a big one.

@LeonAs time goes by, the quality and standards of the Foxhole environment are increasing. We not only want to improve the art but also improve the gameplay surrounding these set pieces. I began to revamp the fortress walls in Weathered Expanse as an experimental task to get the necessary experience for the real challenge: the Bulwark. 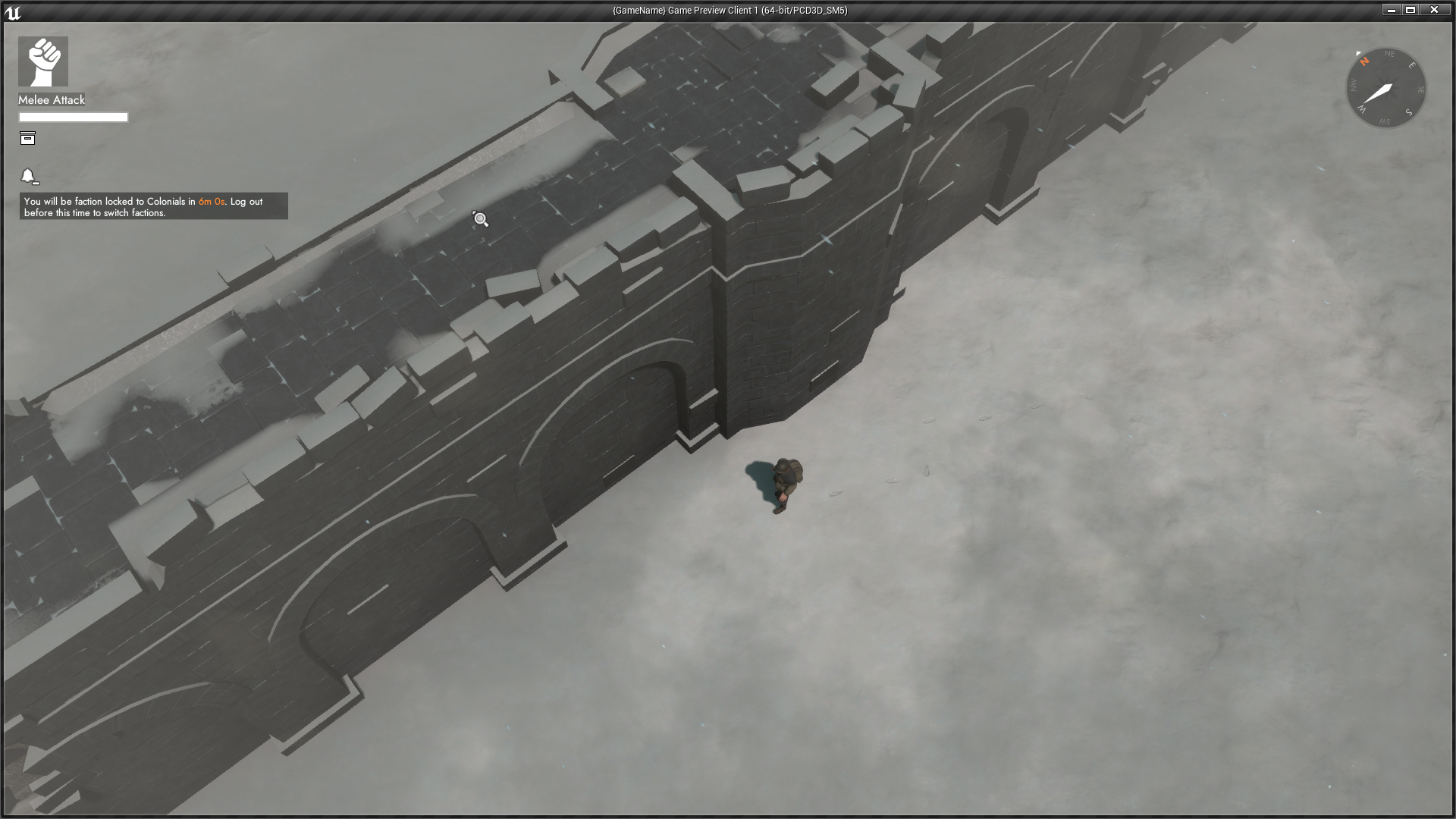 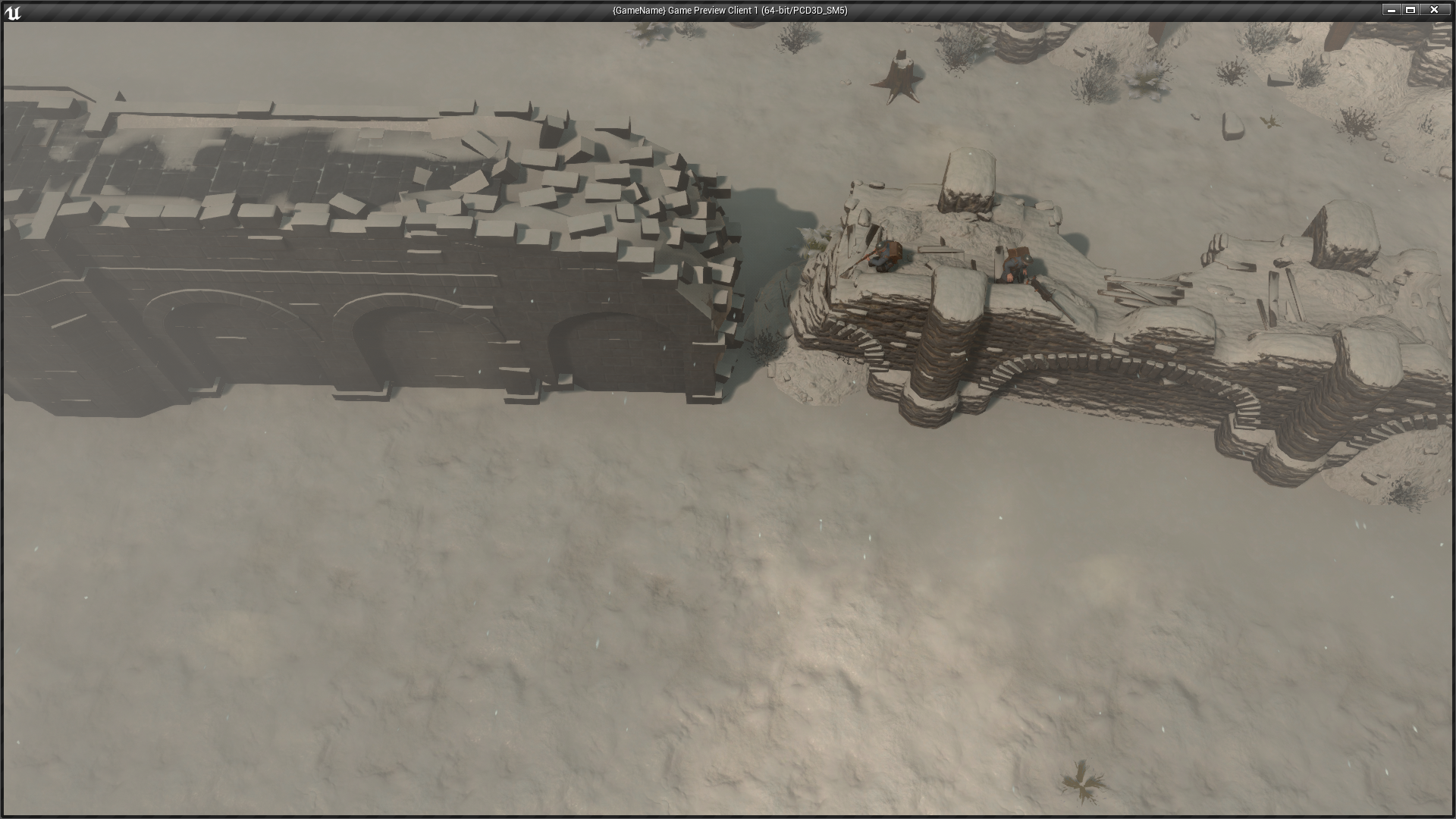 The hardest part was starting. These walls must ensure that defenders have enough protection, yet remain vulnerable to attack. After many tests, we settled on a size, then I began work on an each basic “Lego" modular wall pieces like the wall, the pillar, and the stairs 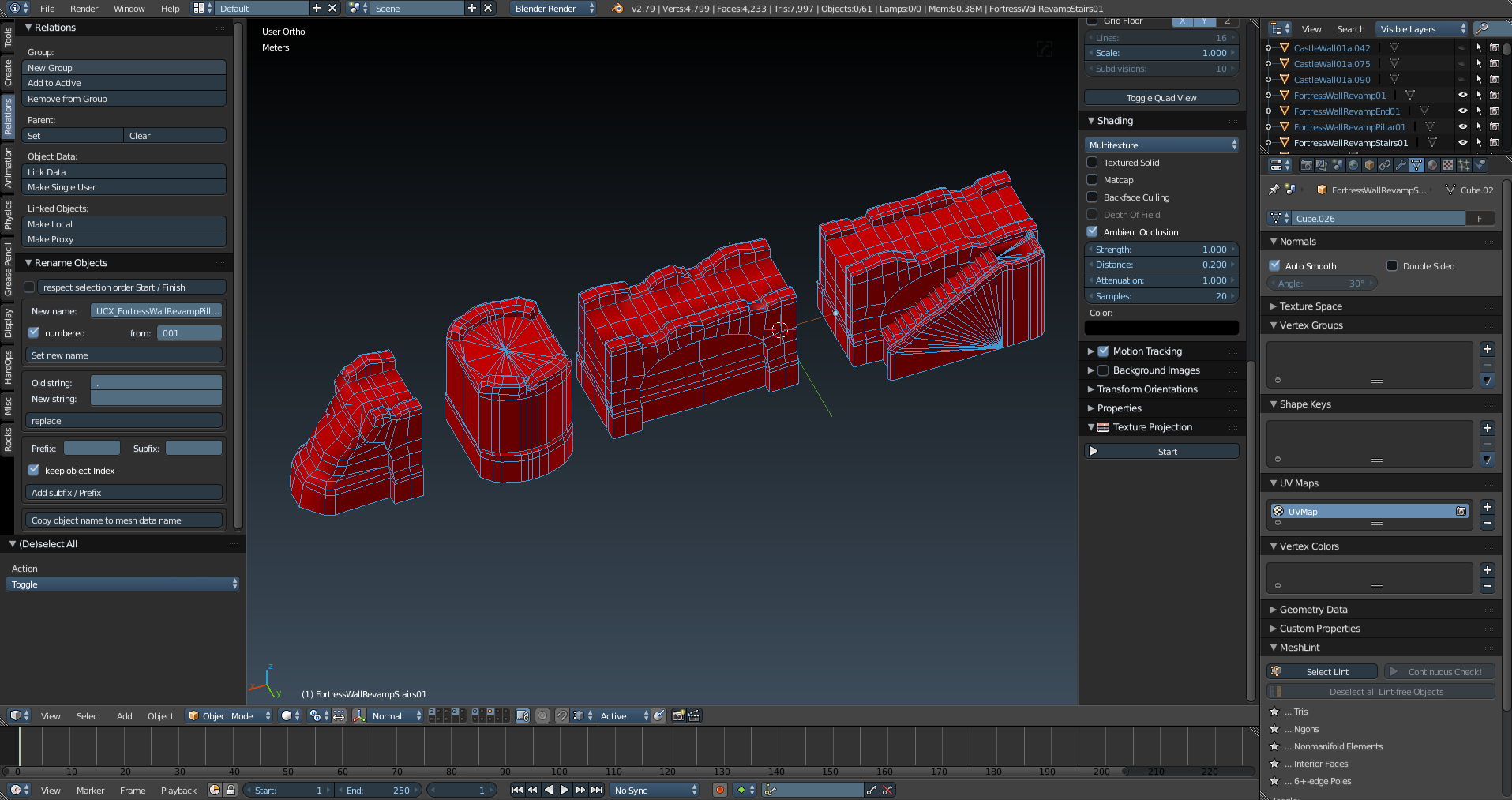 Once the block ins were approved I could begin the material work. I used a material generation program called Substance Designer for the creation of repeating textures. I based this wall off of the Viperpit as they are built historically around the same time in Foxhole. 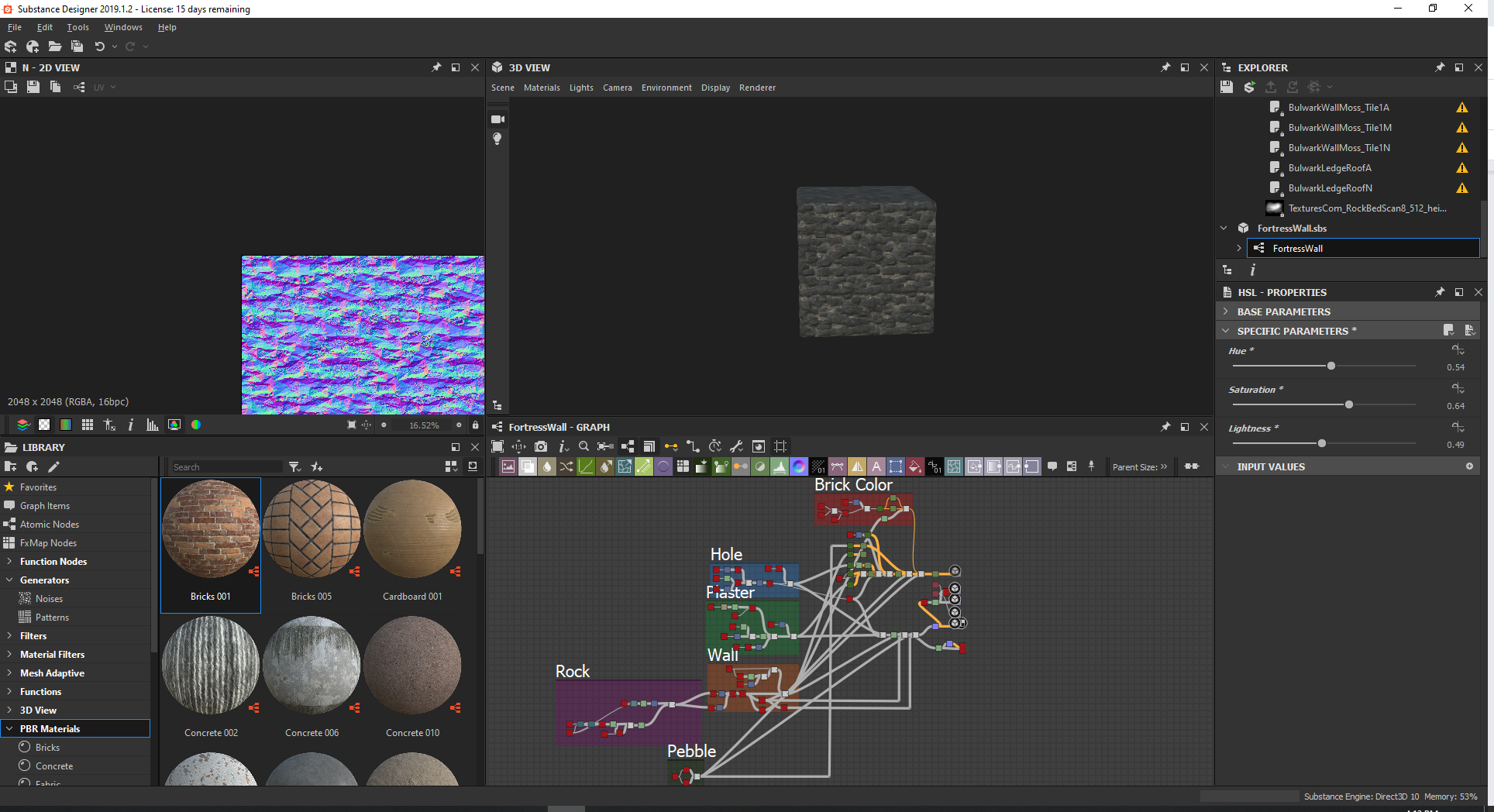 Now, with all things prepared, I could take my time to enhance the variations of each “Lego" piece to make sure the repetition is not that noticeable well lined up and that they have enough interesting gameplay possibilities. 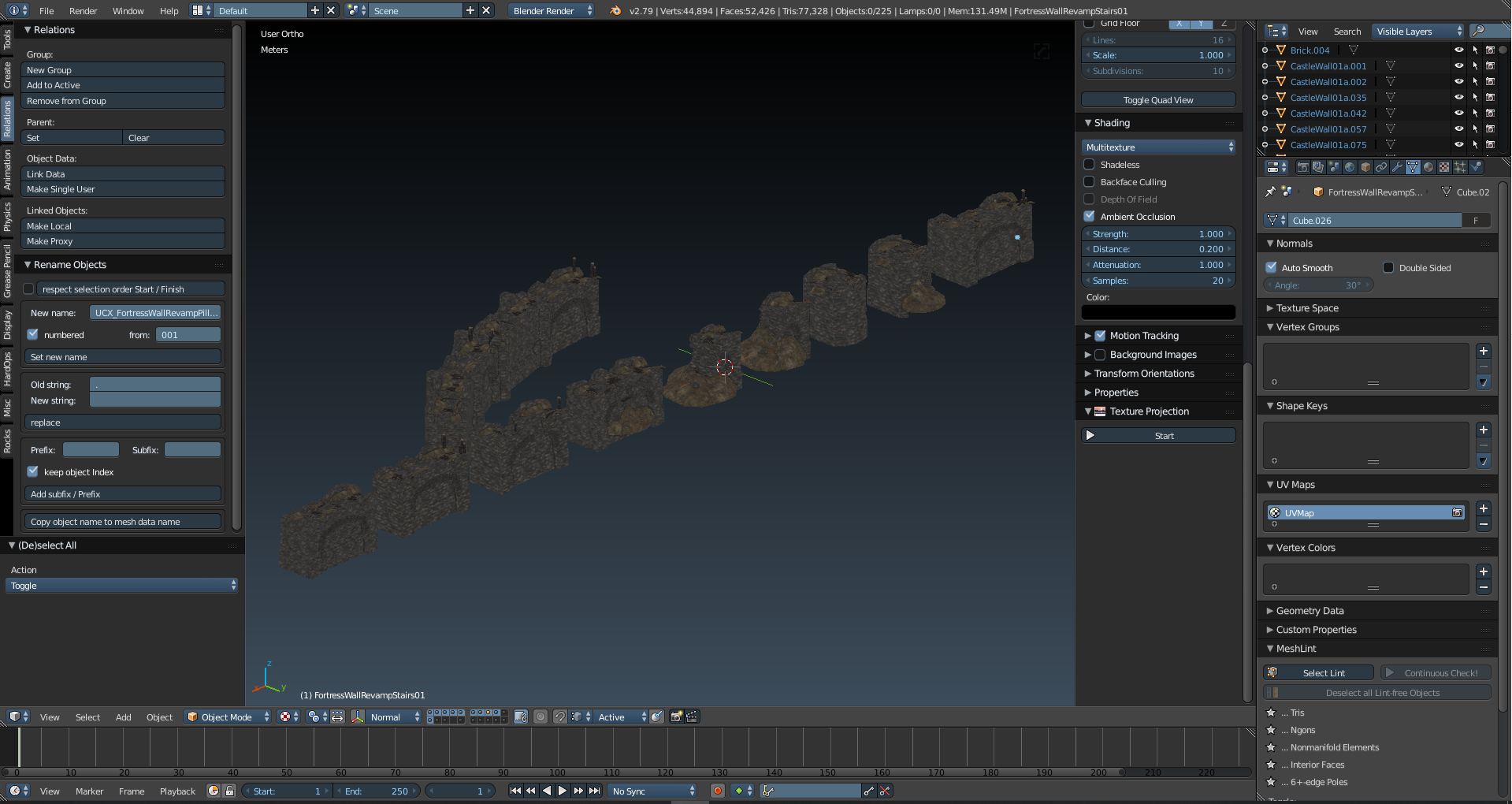 Finally, when I had enough pieces, I assembled all of them on the map to replace the old wall and decorated them with foliage, decals, and other interesting small props to make sure the wall can naturally fit in the surrounding. In the end, after many rounds of tests, the wall successfully merged into the map, functionally worked well, and provided enough possibilities for both attackers and defenders on gameplay. I’m happy with the result, and gained some experience to tackle my next task --- the Bulwark revamp. 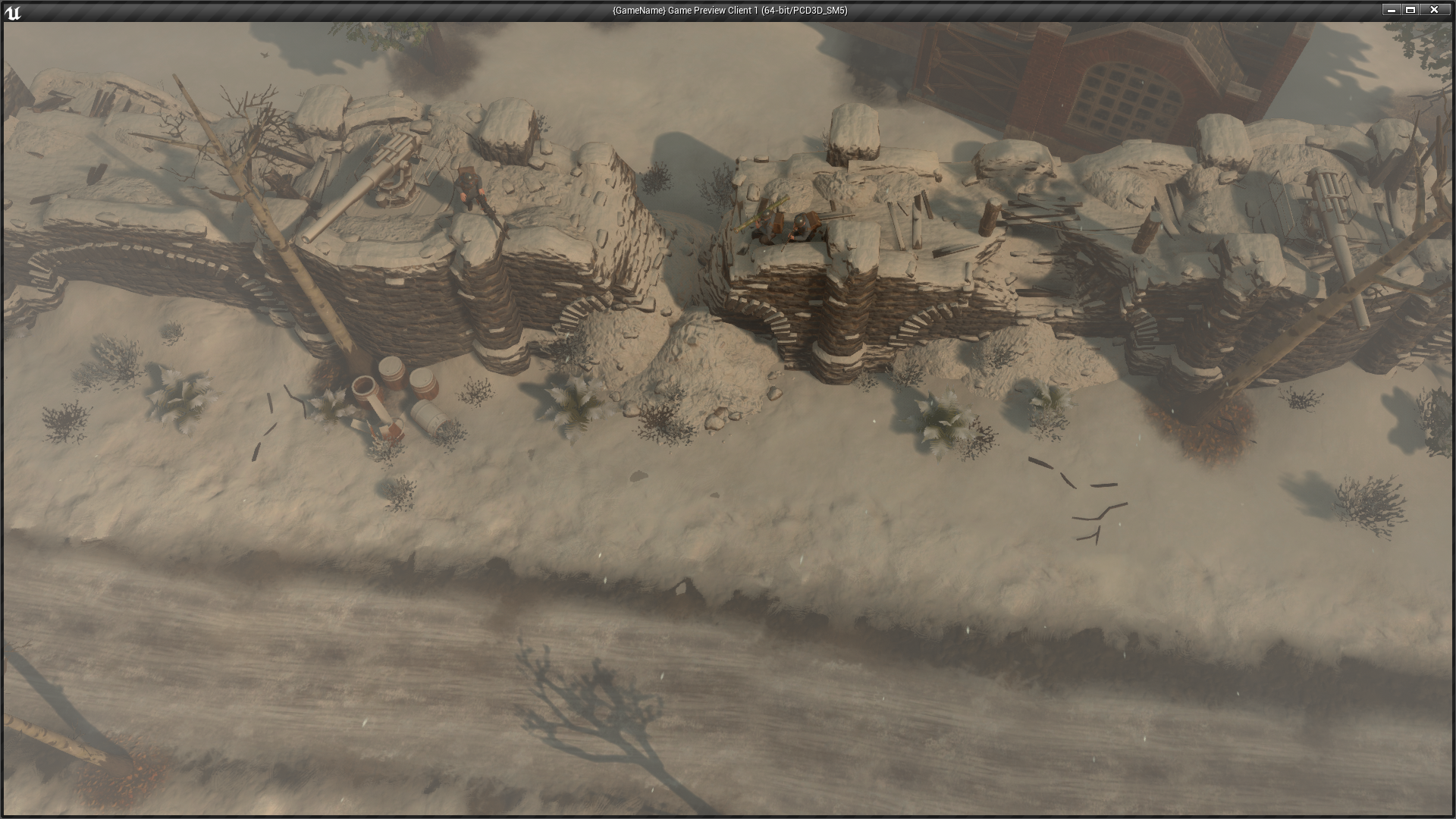 The Bulwark is not like the little fortress wall, it crosses 5 maps on the south and is one of the most important and the largest structure in the lore of the game. We have many vertical restrictions in-game, so our only course of action is making it hollow so players can fight inside instead of on top. For the art style, we used a lot of the Great Wall in China as a reference to study what an aged tough wall looks like. Historically, the bulwark was built by Wardens to defend against the Colonials from the south, but eventually, it was overtaken. So while making this asset, I need to deliver a feeling that this wall has been repurposed by Colonials to defend enemies from another side. Overall, the new Bulwark is a bigger challenge and will have more complex pieces. With all the experience I’ve learned from the Fortress wall, I hope the new Bulwark can be both fun and attractive. 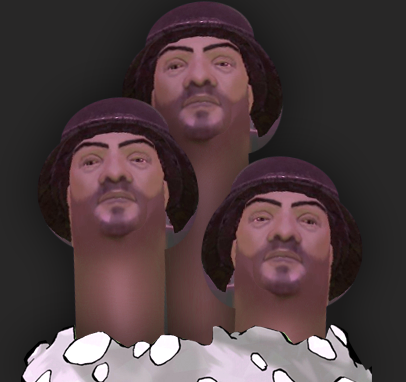