In this Dev. Diary we'll talk about upcoming levels for the game, how we are developing them and how you can get early access to the game.

Hello everyone and welcome to a new Dev. Diary. Now that the Pre-Alpha demo is finished and we have the core functionality already in the game, we are moving forward with the development of the first three episodes.

These episodes however, invlove a series of technical and development challenges that we are solving, including the development of fully functional net code for the multiplayer portion of the game.

In this article we will talk about the development of the level and a few characters, as well as how you can get early access (or beta access) to the game and try these episodes before the final release.

The first episode of the game requires an open map of around 3.5 square kilometers, including a farm, cropfields, a small section of forest, mountains, roads, gas stations as well as an additional smaller map that features part of a town.

Unlike the demo, this first episode will occur during the late hours of the day but still with daylight, and being an outdoors environment it presented challenges for the performance and high quality rendering we wanted to achieve.

The first steps were to create a simple draft of the terrain and cover it with several layers of dense grass. This caused a major performance hiccup in our development machine, but it also allows us to work from a high quality setting and downgrade it slowly from there till we find the perfect balance. There are PCs far more powerful than ours, and because of that the game should support higher qualities than the one we can run smoothly in the editor. However, we still optimized every resource to get the highest quality to framerate ratio and ensure that the game performs without any issues. 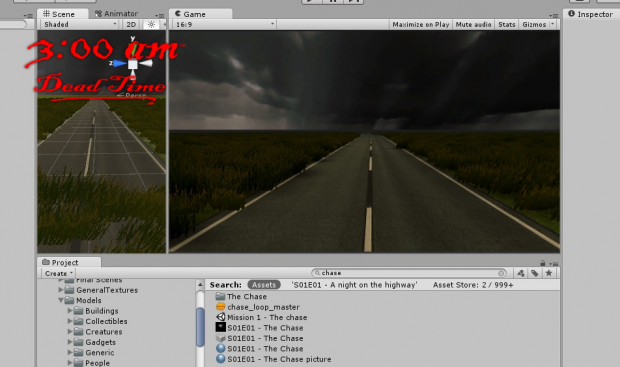 The second step was to add the first roads and then "trim" the grass over them, to keep them clean, as well as finding a good placeholder skybox as a reference to configure our procedural weather system to match it. In the picture above, the sky, while pretty epic at some points, was also too contrasted to represent well the mood we want for this particular location. 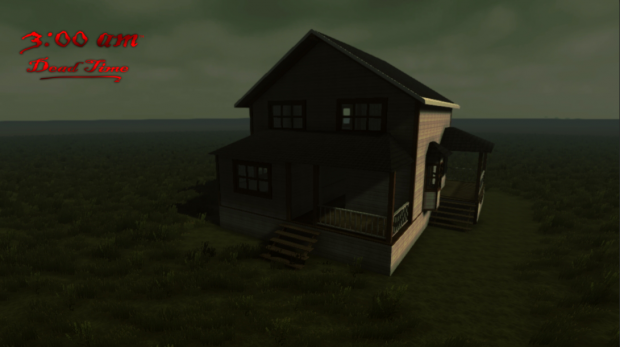 Then we finally found the exact mood we wanted for the scene, and proceeded to develop all the needed art assets, or upgrade the ones we already had. The house above was made months ago, and it has a very high amount of detail (including for example, completely functional, animated and interactive light switches in every room), but all its textures had to be upgraded to 1024x1024 and 2048x2048 files to better reflect the quality of the rest of the assets. A full, complex raytraced occlusion and lighting map was also baked directly into the model for a better quality lighting. 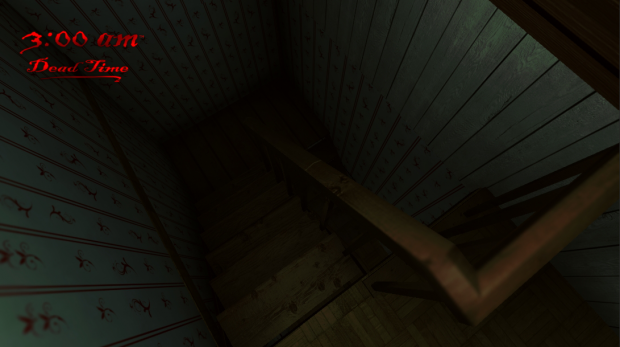 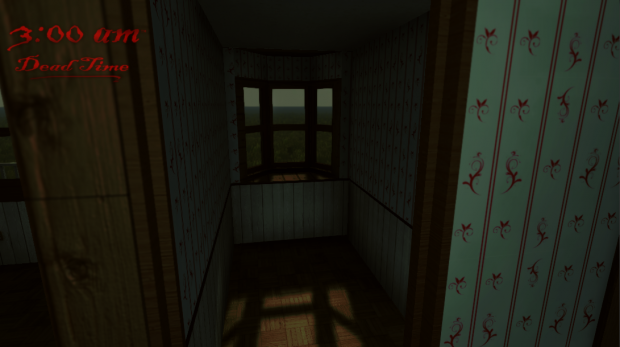 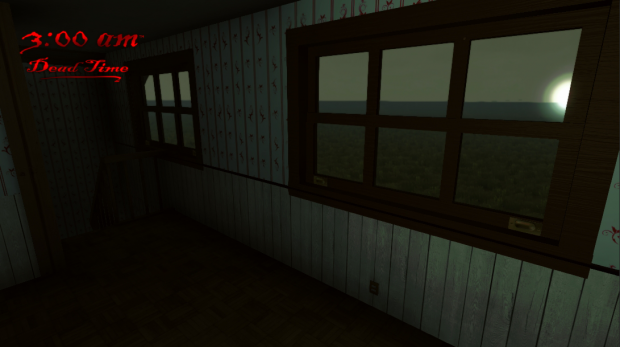 All the postprocess filters in the scene, the fog calculations, the lightmaps, the individual textures and several custom shaders were made to make this scene look and feel like a real stormy day. We are now in the process of fine tunning all the audio files and the atmosphere to make you really feel the slight goosebump of being outdoors during a stormy day in the countryside. 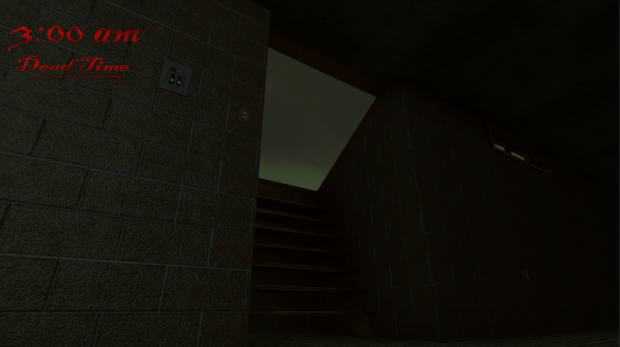 And here is one of our results, an animated wallpaper of sorts, a small video of the scene in the distance running in a test build of the level.

THE CREATURES FOR THIS EPISODE

We will avoid spoilers, but we will also let you take a peek at what this first episode will include. If you have played and completed the demo you also know what to expect for the first full episode of the game. There are however plenty of surprises, creatures and plot points that we are keeping in secret to make sure the experience you get while playing this level is great, and will not spoil in this article.

This is the new creature we are working on and that you can expect to see in the level : 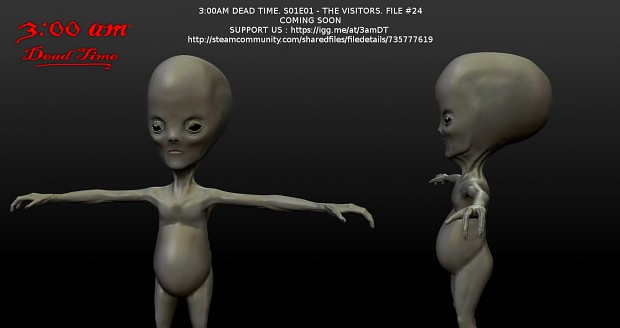 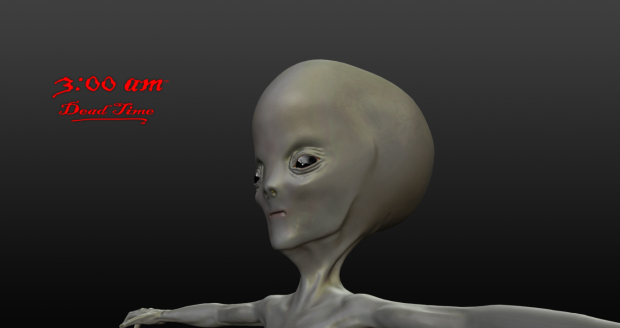 This creature is a full reimagining of our old, very old version of the gray alien. It has been reworked, resculpted, and reintroduced in the game with a better topology to allow for highly expressive facial movements. They will play an important part in the story.

Making each creature in the game takes several days, from the first drafts in paper, to the digital concept art, then to the 3D sculpting, painting and shading process, to retopology, rigging, vertex assignation and shading in Unity3D. Once in the engine, we add them to the AI bank we have, and configure its very unique behavior.

The AI is being reworked to allow several human players, as this will be the first episode in the game to feature cooperative multiplayer for up to 4 players. You will be able to arrive to the place together, investigate as a team, explore the map, fight against the different creatures and try to record as much evidence as possible as a unit. Think of the tactical gameplay of a SWAT game, used in a horror game. The future for 3:00am Dead Time as we move forward and start implementing all the features that will make this game a unique experience.

3:00am Dead Time is currently in active and fast development. The work on the first three episodes is going on at full speed as you can see, and soon we will also start looking out for ways to add voice acting into the game. But we need all your help to make this game and all the plans we have for it a success. If you want to see more of 3:00am Dead Time and get early access to its episodes and content, there several ways you can help :

Vote for us on Steam Greenlight

this will help the game be released in Steam and eventually, once it is in a further development stage, enter the Early Access program. This will help us greatly to get more exposure for the game, a better and easier release for you, and also to improve the speed of development.

There you can get a copy of the game at release with a heavily discounted price for only 8 USD, or get full early/beta access to the game for 15 dollars (this early access is limited in number). You can even become a character in the game, as part of one of the stories. Helping us through IndieGoGo is the best way to help the development as it will give us the funds we need to upgrade our tools and hardware, as well as to pay for the voice work that the game will soon require. So far the game has been funded entirely by ourselves, but we need your help to make it come true and reach its full potential.

Spreading the word about 3:00am Dead Time is a great way to help us reach more people and makes easier for us to get feedback and improve the game. It also will make the development easier when we start the multiplayer beta testing.

Thank you very much for reading this article and supporting this game. We will be posting weekly articles covering the development of the game as well as the latest news and features we add to it. Your feedback is very very important to us, so please leave a comment below and ask any questions or doubts you may have about 3:00am Dead Time. We will be replying to every comment here :)

Again, thanks, and have an excellent weekend!

I remember when this game was just you in a car that breaks down and you come to a locked house. You've come so far. Good luck.

Thank you very much! The game had a quite troubled development at first due to several personal issues, but we are back on track and adding tons and tons of new content to the game. This is the just the beggining, and week after week we will be showing newer content :)

Thanks again for your support and good wishes, and glad to see you are still with us!
The Irreverent Software Team