This week Ian talks about the improvements made to the player UI and the progress on the crypt.

Hey everyone, Ian here, game designer and artist for Crimson Keep. Over the last week we've made some strides with the player UI and a new area of the game, the crypt, as well as setting up enemy progression. 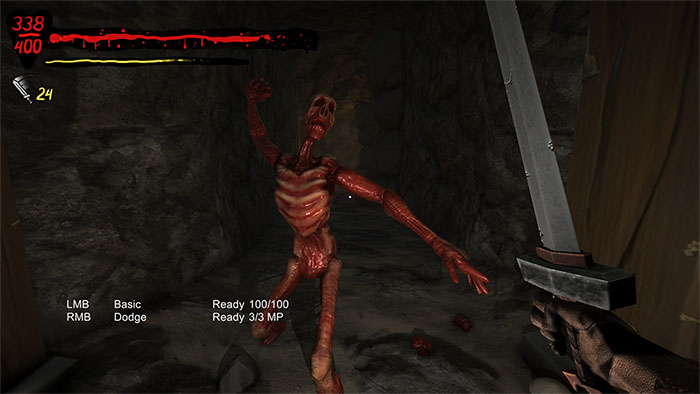 After a couple publishers showed interest in playing the game, we felt it was time again to introduce a little more polish into the look and feel of the game. User interface tends to be a big part of this. Although the art I made for the interface is far from finished, it sets the mood better than plain white text with the Arial font did. There's still a lot of work to do with UI, but I think we've taken some good first steps.

Getting the game setup so that we can place monsters of varying difficulties in each subsequent area of the game, and balancing their stats with the player's is an important task. So over the last couple weeks Ben got the game hooked up so it knows how far into the game each area is, and can spawn different monsters depending on that. In the end we really want to avoid just doing basic reskins with different stats, fortunately there is a lot of things that can be tuned: attack speed, attack range, turn speed, charge stun/snare power/duration, personal buffs, and a lot more. We aim to have around unique enemies in each tileset, with their own strengths, weaknesses, and abilities. The plan is to have 9 levels of the dungeon, with 7 distinct tilesets.

Thanks for your continued interest and support for our game! Stay tuned for more articles in the coming weeks. Please feel free to offer up any questions or comments you might have about the game, we're always looking for more feedback.

Wow I never heard the music before. I like it a lot! It really sets the mood and it's very nice on the area transitions.
I think you have a good balance of colors going at the moment. You have spots of color now so they are not over represented. It definitely feels spooky overall, and the purple/pinkish lights you have seem that much more magical because their color stands out. If you use the colors sparingly like that I think it will work fine.

Thanks isbeorn, yeah I'm very happy with this music so far. There's only 1 track at the moment, but we're working on that. Thanks for your comments, I'm hoping to hit that sweet spot of color and looking interesting while still being a little creepy.

Very cool, I love the crypt area already, though it seemed like the exit was too readily accessed in it. I don't know if this has been a recent change but I have noticed a lot of static in the last two videos, it's kind of distracting especially because I have headphones.

Thanks. Yeah just getting started on the crypt so not that many rooms, and not populated with monsters yet.

I don't have the best mic, so that's the cause of the static, will try and work on that.

For your question about more and less colours id suggest to go to a place in real life that has such an atmosphere and get a vision from there. i think you shuld check out painkiller the first game and battle out of hell. its more colourfull then diablo and yet it has that horror vibe going on.