I’ve been worrying about music for a long time. I’m an extremely amateur musician and I’ve made track after track for this game. I’ve tried to create scores that I felt fit the atmosphere I wanted but even the tracks I’ve really liked got tiring after I’ve put them in the game and heard them a lot.

I wanted to have music sync with the combat so for a long time my solution was to start the music when a battle began and then fade it out when all the enemies were gone. Well even when switching which tracks play depending on the progress of the run and for variety each time, I was just finding the music to get stale.

Here’s my favorite track from before I solved my music problem:

I decided that with this type of game, where you are going to be dying over and over, you don’t want to respawn and then go have vastly the same experience with the music over and over again. Plus only having the music queue up when you are doing specific tasks made the music feel really choppy and turned it into more of an annoyance than part of the experience.

I eventually noticed that when I play the game, I have the most fun with the game when music is just playing all the time. So I started working on how I could have music playing all the time and make it natural. I’ve also been wanting to incorporate more dialog for the sidekick character in the game, Wordsworth.

I realized these 2 problems could be solved together, so I decided to give Wordsworth a radio station. He makes stupid comments about the songs and then plays tracks for the player. It’s one of his software features he has been outfitted with to keep you happier so survival isn’t so hard. 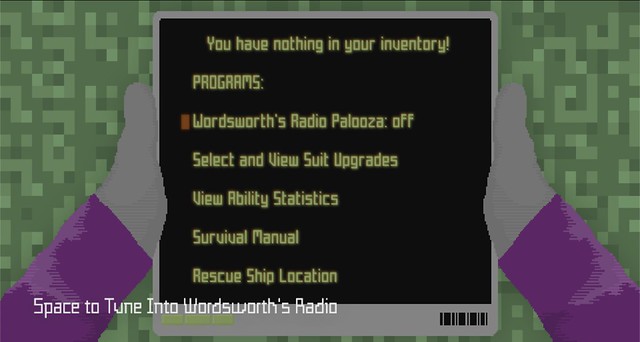 Each track he plays is randomly generated, so that there will be a lot of variety. The algorithm isn’t very advanced. It only puts together preexisting sequences of music, rather than generating melodies. I really feel like game music needs to have easy listening, and be very catchy, but not too distracting.

Here’s an example of a track that could be generated:

All in all, I’m really happy with what Ive got for the music. It adds a lot to the experience and brings more character to the world.

Contingency is coming soon, and is available to wishlist on Steam.