The latest update has released! This update features what the we've been up to, what's being worked on and what to expect from us next and a new map being shown off!

Hey everyone, so as always it's been a super long time since we've put out any form of real update. Well here's what's been going on and what else we have planned!

So if you were left feeling a little bit confused by our April update, it was indeed an April Fools joke. We aren't going to be moving over to an RTS, I'm sorry to those who were looking forward to the idea but we're still working towards a release with our current project!

What's been going on?

Quite recently we made the jump to the latest scripts build that TT has to offer, version 5.0. This is the version that the currently released APB Delta uses and TS: Reborn are planning on releasing with soon! With these new scripts comes a lot of features with both graphical things and with what we can do.

As most of you who have been following the project might of seen that we've had sprinting for awhile now in a video feature, and those who have played APB will have seen a different version, their's is thanks to 5.0 and ours is thanks to a script by triattack.

Other things we can do with 5.0 is improve upon old features and create them closer to how we originally wanted them implemented, but couldn't due to limitations such as the Carryall and Harvester logic. Along with changing how Carryalls and Harvesters behave we also plan to completely redo the Sandworm script, as this can be improved majorly!

With new scripts builds come bugs and broken features. We've been busy fixing everything that broke when we moved over to 5.0 but there are still some issues that need ironing out, mostly with harvesting. Our version of sprinting is also not working 100% currently, which is a bit of a drag but should be a-ok next build!

The current maps we have ingame are fairly old, and look it. So the objective is to get them up to scratch, make improvements where needed, and update the texture work. They also lack detail in some ways, even more so in light of recent W3D levels! 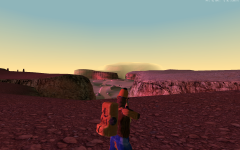 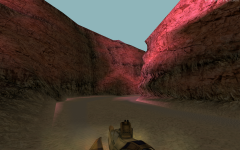 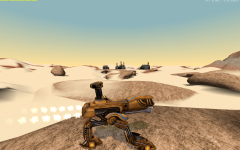 Some of our core gameplay isn't exactly where we want it to be, so extra effort is being put in to make sure this changes. We're constantly taking a look at what's working, what doesn't and what just doesn't make sense. All with the hope that when we do get a release out to you guys, it's something we can truly be proud of!

So for those of you who saw our little April Fools update, you may have noticed a new map poking it's head out. This is in fact a new TDM map called Lima Outpost! It's a remake of the Renegade Tutorial terrain, which is a small Harkonnen outpost shielded in a cliff circle. 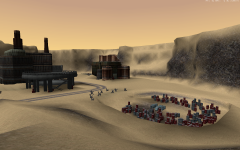 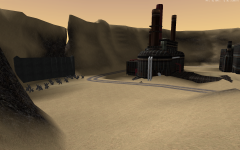 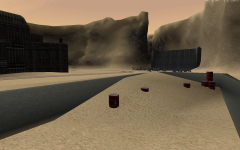 There will be weapons, health packs and shield packs to pick up that will spawn in random locations. The time limit will be set to around 5 minutes, expect to hear more on this soon!

We still have a fair amount left to do before we can release. With this, we are going to try and keep you as updated as possible with small new feeds of our progress!

Some things we hope to show to you soon are;

With the standards of our levels falling behind other W3D projects we are revamping what we currently have. On top of this we are also working on new maps which we'll hopefully be able to show off soon!

We have a couple of new Harkonnen weapons that we need to rig up and get ingame, what they are and how they'll work we'll hopefully be demonstrating in our next update.

Since day one, we've been using the old C&C Renegade hands and we thought that it was about time that we finally set up our own. There isn't much else to say on the matter right now, but hopefully in the near future we'll have something to show off!

Do not trust the Lady Elara

That's it once again for another one of our rare updates (hopefully not so rare from here on..), as always be sure to tell us what you think and keep following us here, on Facebook, Twitter and Forums!