Hey everyone, it has been a while since our last update, but let's take a look at what the Battle for Dune team been up to in our silence.

First off, allow me to introduce myself, I'm NodFan. I have been a longtime member of the community and have recently joined the Public Relations Department for W3D Hub. It is my duty to assist the community with any questions you may have regarding our projects. I am also responsible for keeping YOU updated on our latest progress.

Right, that's enough about me, let's see what we've been up to!

First Person View
Eggman891 has been busy with rigging up the Pistol and Sub-machine Gun for House Atreides, the first weapons with new First Person Hand rigs. Here are a couple of shots of the two weapons in-game! 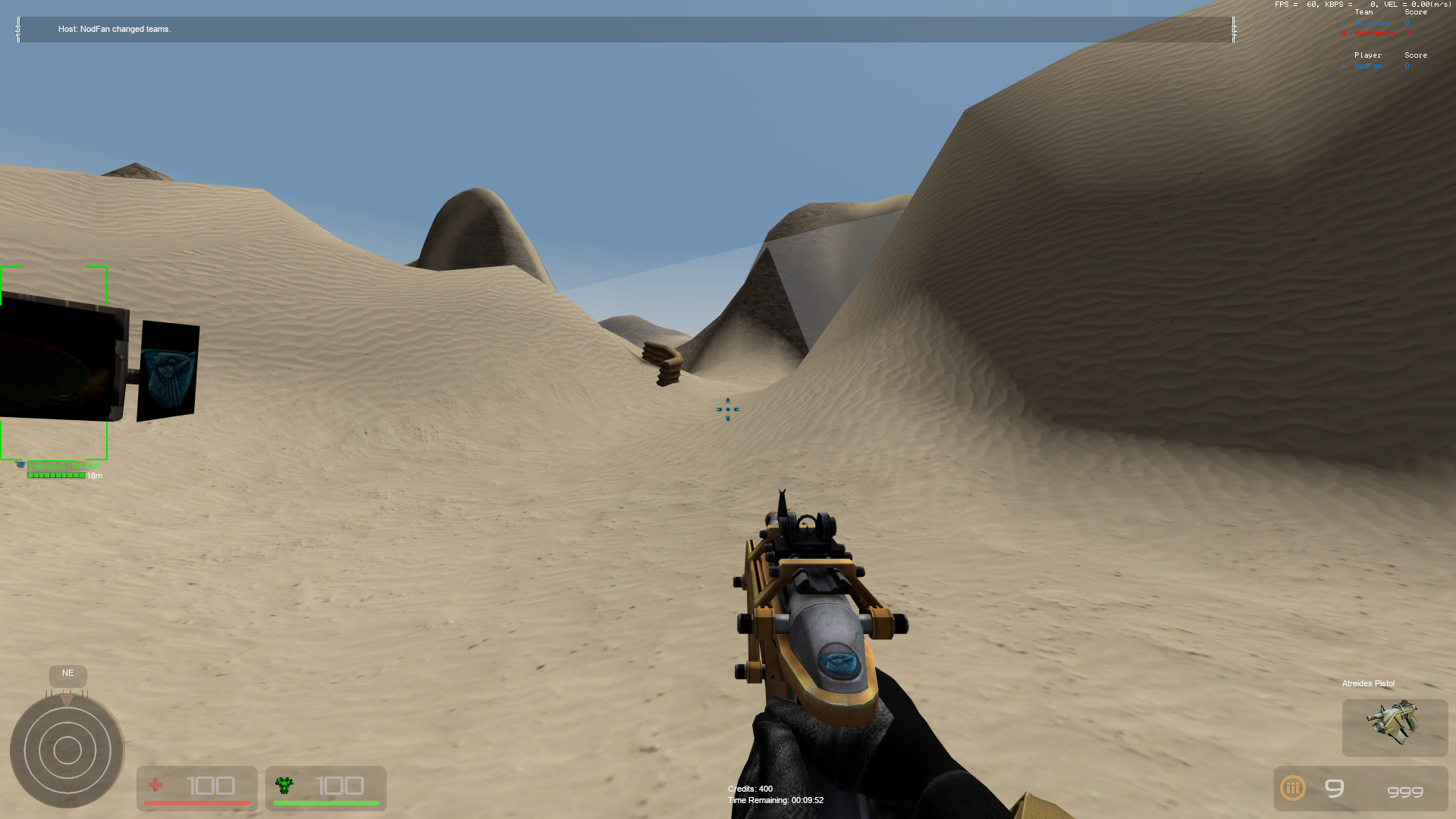 "The Talon Pistol is the basic sidearm for all of House Atreides combat personnel. It is a fairly accurate gun with a decent rate of fire and damage." 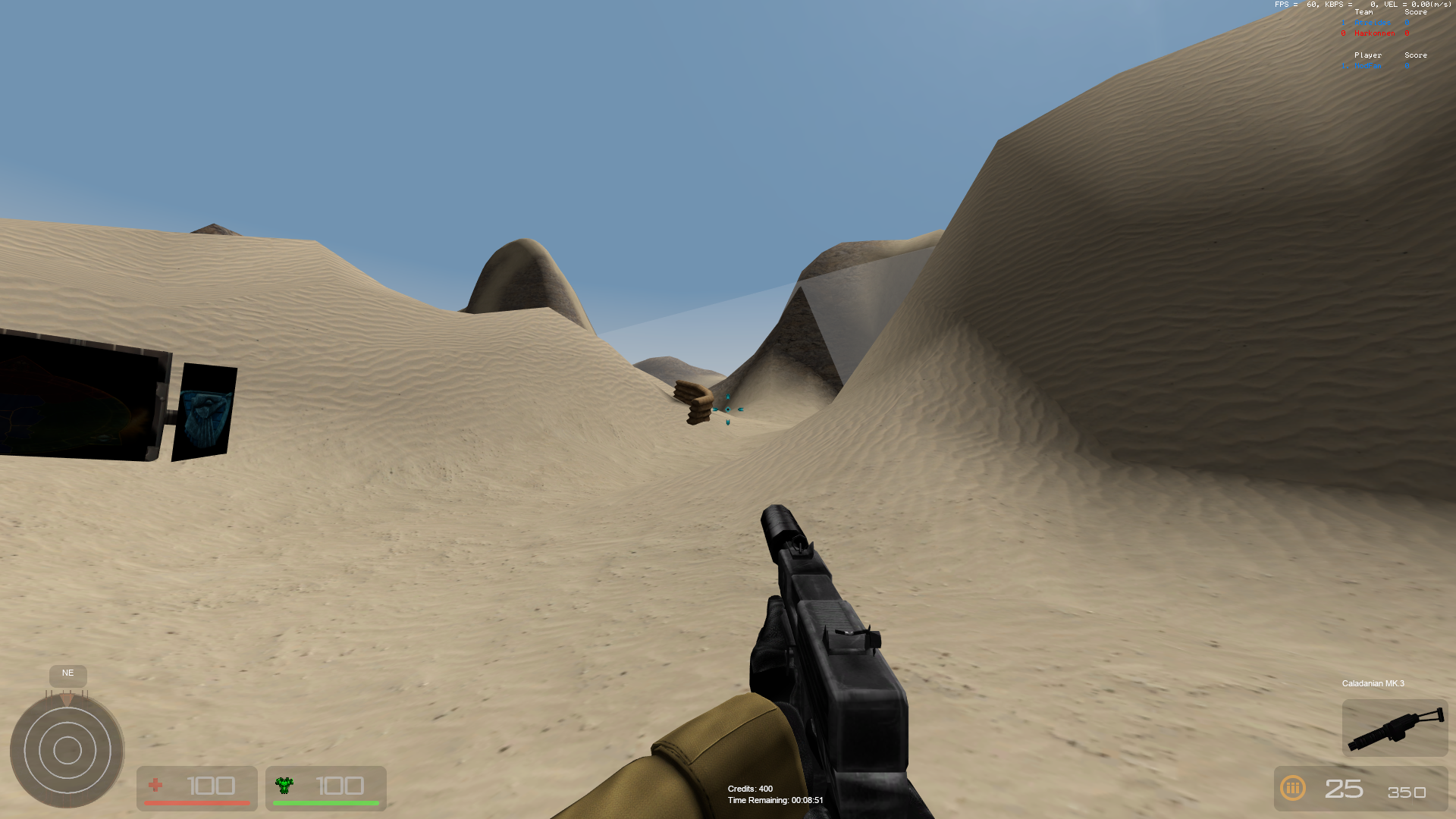 "The Caladanian MK.3 Sub-machine Gun is the standard issue automatic weapon for the standard Light Infantryman, which make up the bulk of the House Atreides army. A light, slightly inaccurate but fast firing weapon, it is a suitable choice for close encounters."

Conquest
The team has been continously working on the upcoming release. We are currently testing the balance between House Atreides and House Harkonnen infantry weapons.

Along with this, we have also been working on a new Game Type. This Game Type pits the two Great Houses against each other to go out across the map and capture strategic locations, referred to as Capture Points or Control Zones. 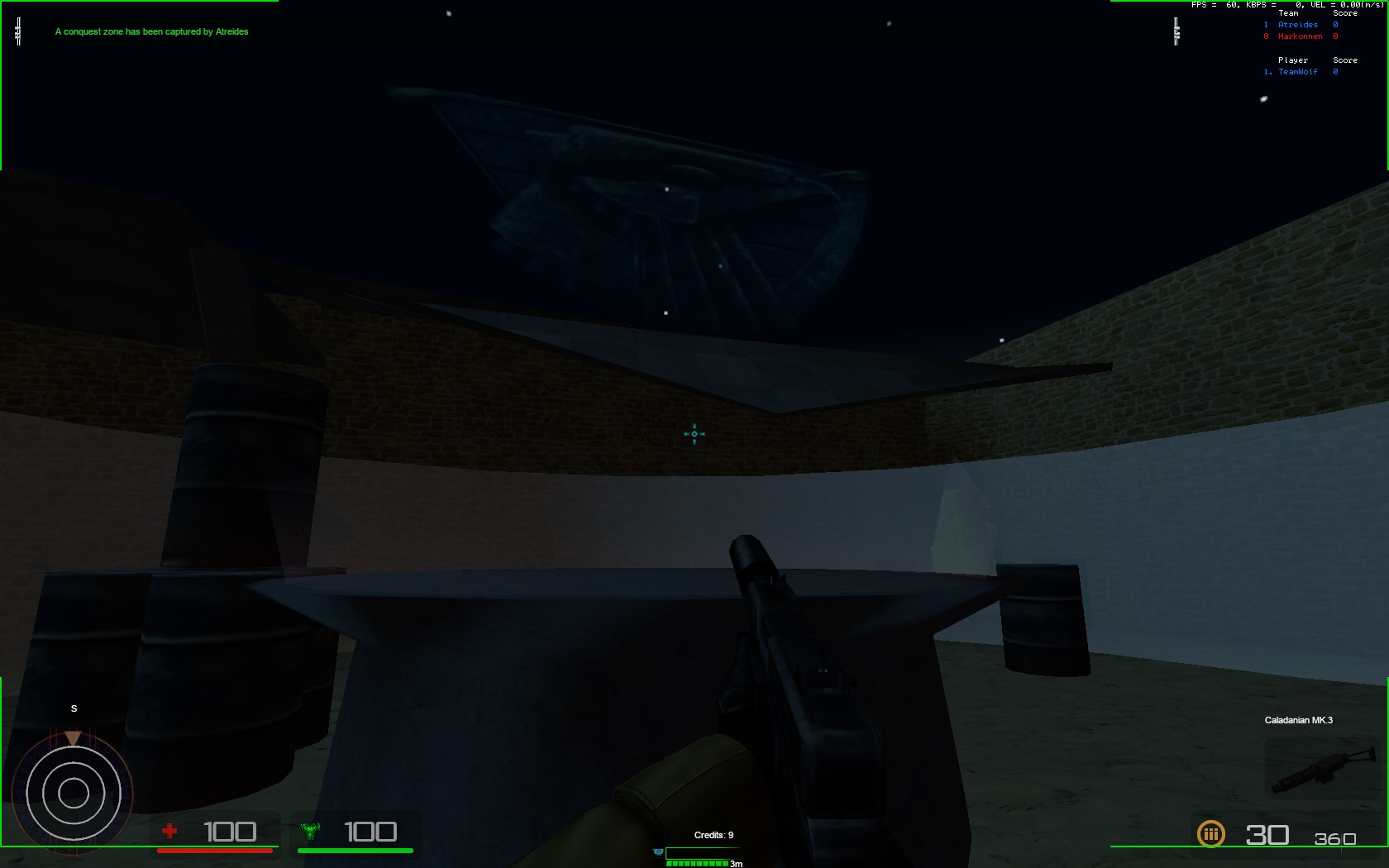 These Zones will take time to capture, with more people on the point, the quicker it will take to capture. Each Zone capture will generate a credit trickle every second, along with score points.
These Zone locations will be objects of importance, such as Artillery or Anti-Air guns, Water reserves, Ammunition stocks, etc. Each House will need to capture as many locations as possible to reach the point limit and win the game! 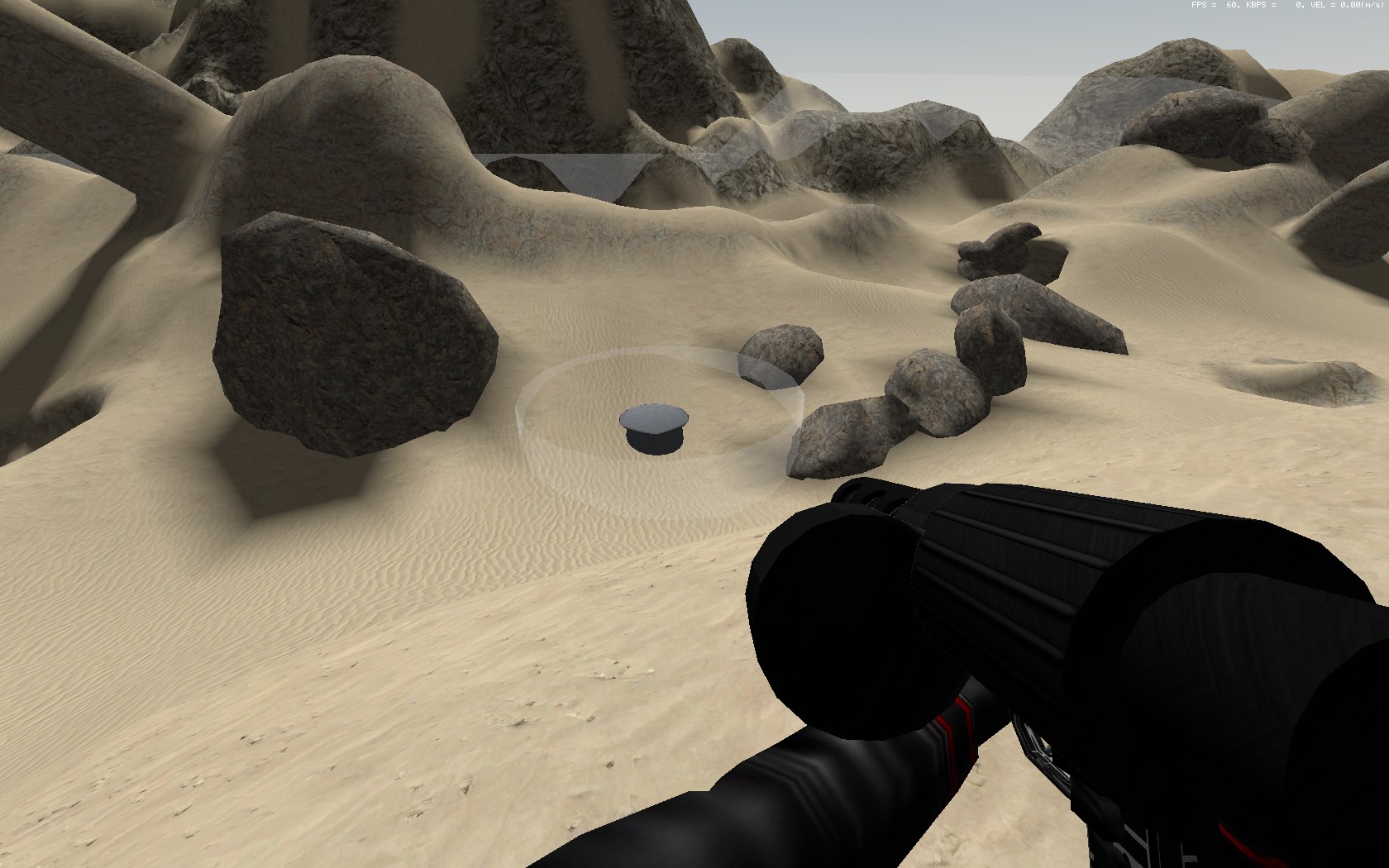 As shown in a previous blog from FORCE, the first release will include infantry only and we plan on having three game-modes: Team Death Match, Conquest, and C&C/AOW (the last game-mode featuring buildings). Unfortunately, there will be no vehicles in the initial release as they have been slated for the second release. By third release, we plan on including the Ordos as a playable faction.

Along side our new direction, CMDBob and Yah-Nosh have been incredibly busy working on completely overhauling weapon mechanics and how they play!

Here's a quick breakdown of what this means;

Your weapon will start out with a base accuracy, each time you shoot your accuracy will decrease, making your reticle bloom out. This will hit a maximum point that it can decrease to.
Much like Red Alert: A Path Beyond, Jumping will heavily decrease your accuracy meaning that you can no longer bunny hop in infantry fire exchanges. While Crouching will tighten your accuracy, allowing you to shoot at targets for longer before the accuracy becomes unmanageable, but also helps recover your accuracy more quickly.

With this, weapon ranges have been heavily increased. From standard bullet base ranges being 30-50 meters, new ranges now being 150-200 meters. Now obviously, if we only changed the ranges this would turn every weapon into a Sniper Rifle! However, bullets now have drop off over time and damage falloff, dictated by distance, so a weapon dealing 30 damage per bullet at 30 meters would only deal 5 damage at 100 meters.

With all of this combined, shooting for short bursts and moving into cover while your accuracy recovers becomes almost critical!

Expect a video showcasing this and the new Conquest Game Type soon!

FOR SHAI-HULUD! AND LONG LIVE THE FIGHTERS! 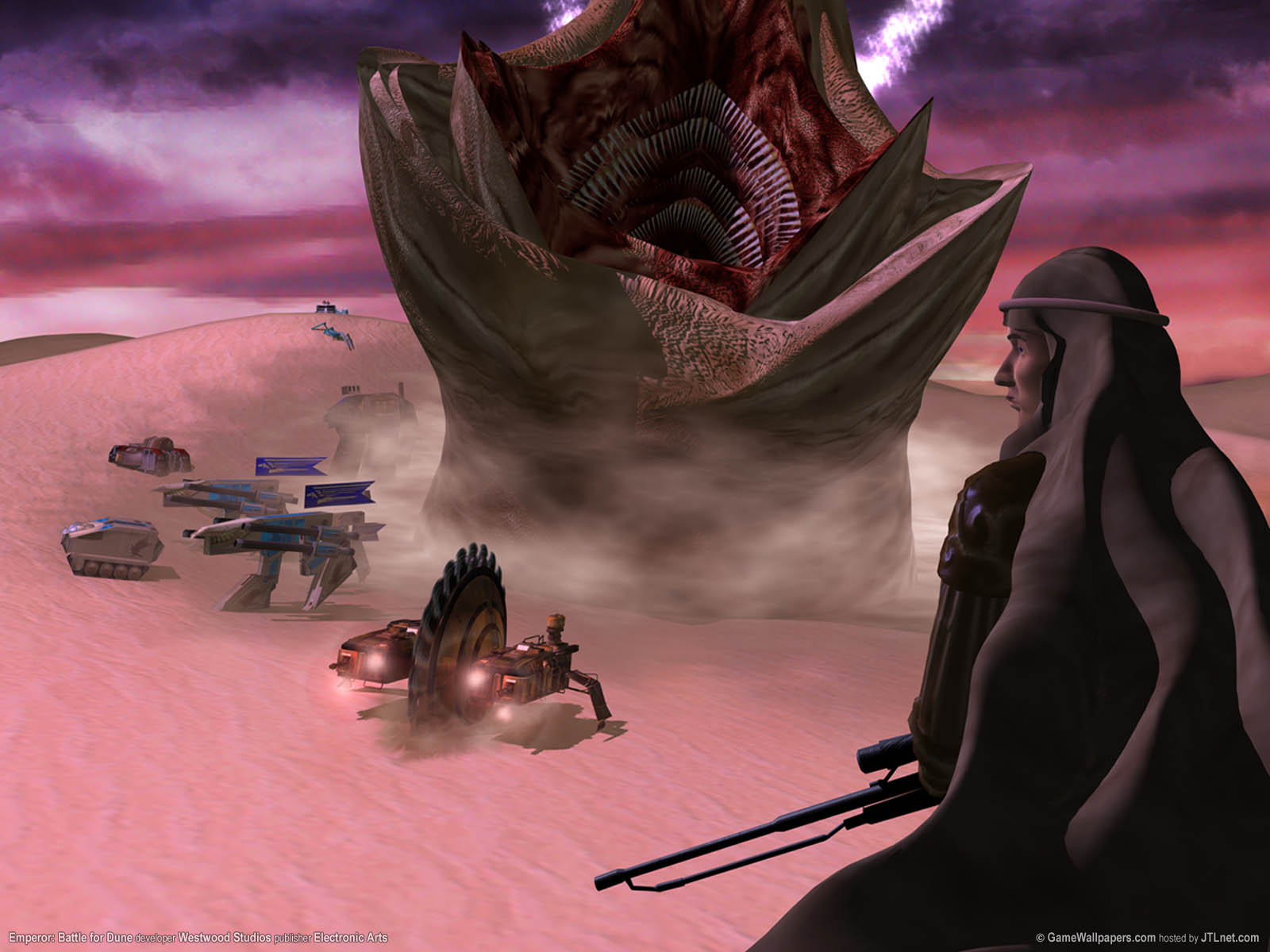 That is all for now this installment of Battle For Dune news, we've got to run now before the Sandworm gets us!!

Happy to hear from you!

Thank you for following us for all these years!