Extra juicy info this week on the development progress for the expanded multiplayer Island.

This week the Flix team have been continuing work on exciting new features, abilities, enemies and environments. From high level progression design to new build and power system implementation, from huge map development to increasing the creepy nature of the swamp areas… Take it away John!

I’ve been working on getting the upgrades defined and the progression system nailed down, there’s plenty of nerfing that i’m looking at balancing with new features such as takedown/instant kill executions. I’ve also been pushing the full designs through for the armour types and perks, feel free to ask questions in the comments below and i’ll elaborate! Also been overseeing the new build system implementation this week which includes the new power generators and a power bar so that you know what you’re building and how much power you have left. 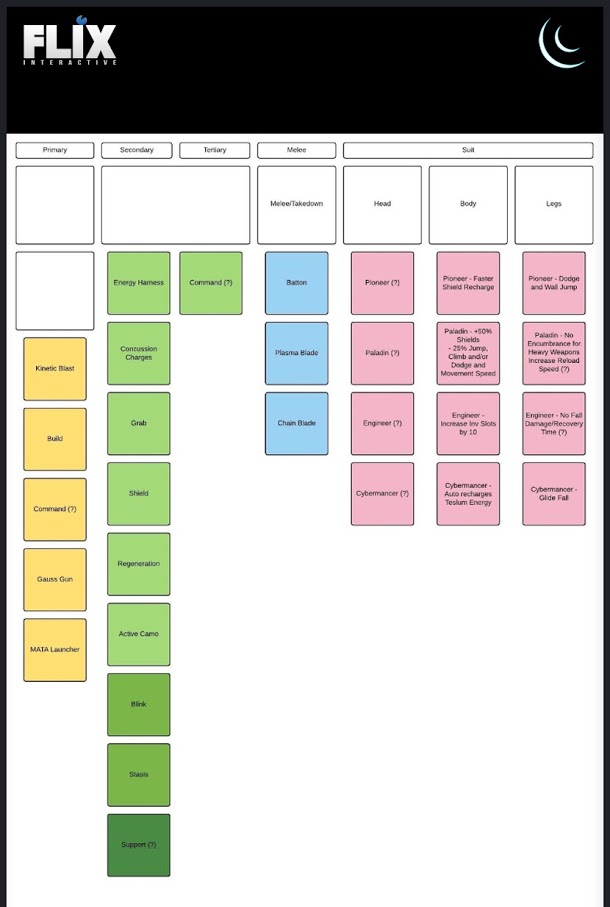 Part of the progression system I’m playing with includes such placeholder item names as; construction kit, armoury of destiny and wobbly turrets. There’s a bit of micromanagement, but i’ll post the details on trello next week once we get there, but for now I thought i’d share a small nugget of the ideas here. (Please note - all of this is work in progress and subject to change!)

This week I have been continuing to work on the new Juggernaut. I’ve also been taking a look at the performance issue which was introduced from our last update with the new in-engine perception component. I want to see if it can be improved or possibly re-written for our own needs.

This past week I have been working on visuals for future underwater sections of the new Swamp Biome, which has also seen a bunch of internal fixes. I have also finalised my initial setup of the terrain for a brand new map - we think you’ll be impressed!

This week I’ve been getting my teeth in to the new build mechanic building loads of epic bases that will, I’m sure, make you pioneers feel even more awesome. Remember “A Pioneers base is his castle” Well now you can actually build a castle!!

I’ve been working on the latest addition to the Swamp, the Swamp Walker. Really trying to push the creepy vibe for this one!

Working with Gav and Joe on the initial design and feel for the new map including establishing design rules for making different biomes feel realistic in the world. Created rough terrain geometry before passing it over to Joe. Begun the setup and blockout of the world.

Finalising all our tasty production timelines all the way through to Version 1.0. I’ve also been sadly saying my goodbyes to the team, this has been the best two years of my life, it's been a blast...thank you

Over the past few weeks we’ve made some major changes to the build system, including a slightly larger grid size. The new assets for the base build set (of which there are now over a dozen unique pieces) are my primary focus, getting them made and set up correctly. With the help of Andy ‘the man’ Simkin testing the new pieces we are hopefully going to be getting them into an updated build of the game sooner than later! I’ve also been working on HUD graphic updates with the boys from the UI department, aka Ricky.

This week I have been refining 1st person swimming animations and setting up the blending in engine to allow use of the right hand for underwater combat. I have also been continuing work on the Swamp Snake and Juggernaut and have started work on the animations for a new creepy swamp critter, the Swamp Walker.

Animations are work in progress and subject to change

This week I have been working mainly on refining version two of build which we are hoping to get to you as soon as possible. It’s a huge step forward from the original build and I’m really looking forward to seeing the structures that our community build. Also squashing bugs like a demon.

I have been working on integrating the new power system into the new build system and setting up the utilities and defences to work with them.

Finalising the work and visuals of the new UMG HUD to ensure everything is in order. The shiny new Build Menu is in UMG, as well as the Power System HUD bar which I am also adding finishing touches to and ensuring efficiency on. I’ve been phasing out the old menus, to make way for the new UMG HUD which allows FOV changes. I’ve also completed some code functionality to control the scale of Construction UI, Loadout UI and Eden Kit UI menus.

Gavin - Concept Artist Chris, Joe and I have been exploring some of the possibilities for biomes for the aforementioned new map; it’s going to be absolutely huge and filled with cool things!

I’ve been converting our current HUD into our new shiny UMG HUD! I’ve also been working on some functionality which will allow us to control what elements of the HUD stay on and which elements start fading away if not in use, this should all hopefully clean the viewport so that only the necessary information stays on at the correct times!

I’ve reworked the way that some of our HUD works, making it efficient in some parts as well as add little bits of functionality where needed. Along with our new HUD, we have started our work with Field of View changes.

Our new UMG elements allow us to control this value whilst resizing the HUD elements perfectly to stay within scale. Lastly I’ve been turning a lot of our on screen text into a localised text format which should hopefully allow us to look at localization!

Lastly, as you might have seen above, we are saying goodbye to our wonderful producer Kyle (don't worry we plan on throwing him an awesome party). Over the past two years he has been staring at spreadsheets, gantt charts and our multiple internal Trello boards, organising tasks in the backlog so we have everything planned out up to v1.0. Not to mention cooking the team delicious lunches to keep us going. Everyone here at Flix wishes him all the best for the future, take care and good luck!

why is kyle leaving?