Solo development is a very special approach to create a game. I would like to give you a condensed overview about how I faced this challenge for my recently released RTS game.

Well, first of all: I am not an expert concerning game development, so please do not understand this article as some kind of how-to, I just want to talk a little bit about the way I did it – maybe including a few recommendations.

That being said, I wish to start with some short explanations about the game itself and some ingame screens. The game was released about 2 weeks ago to iOS and Google Play, but most of you won’t know it. 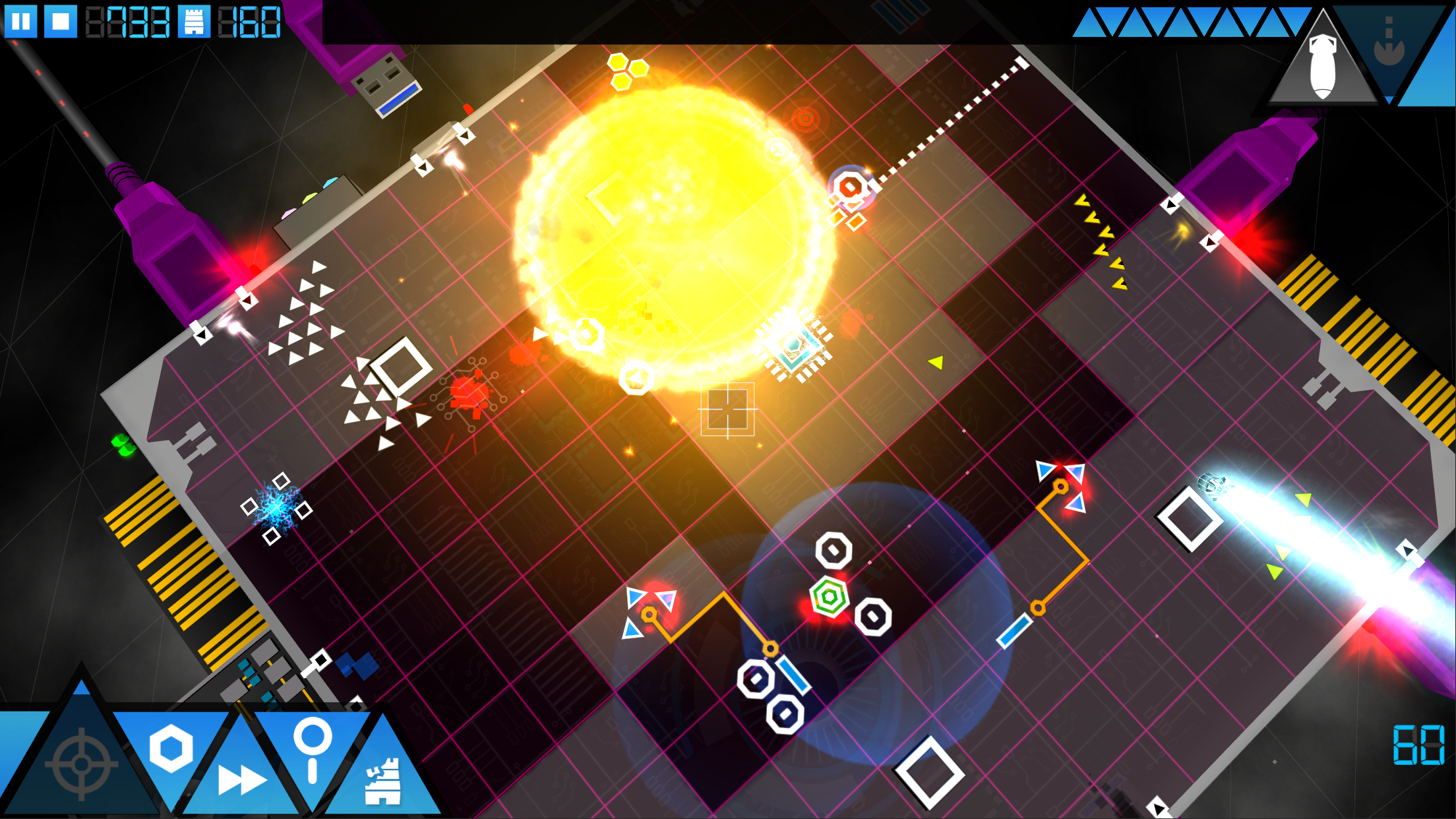 Look & Feel:
The levels (called systems or servers) look like abstract circuit boards. On these board you can find a lot of system structures like (backdoors, databases, firewalls, OS, back-device, defense-modes, scanners, etc.).

The basic idea is:
Backdoors spawn creeps (bad guys), which want to get in to your OS or corrupt system structures like databases. You job is to defend your OS and hold back the crowd as long as possible by: 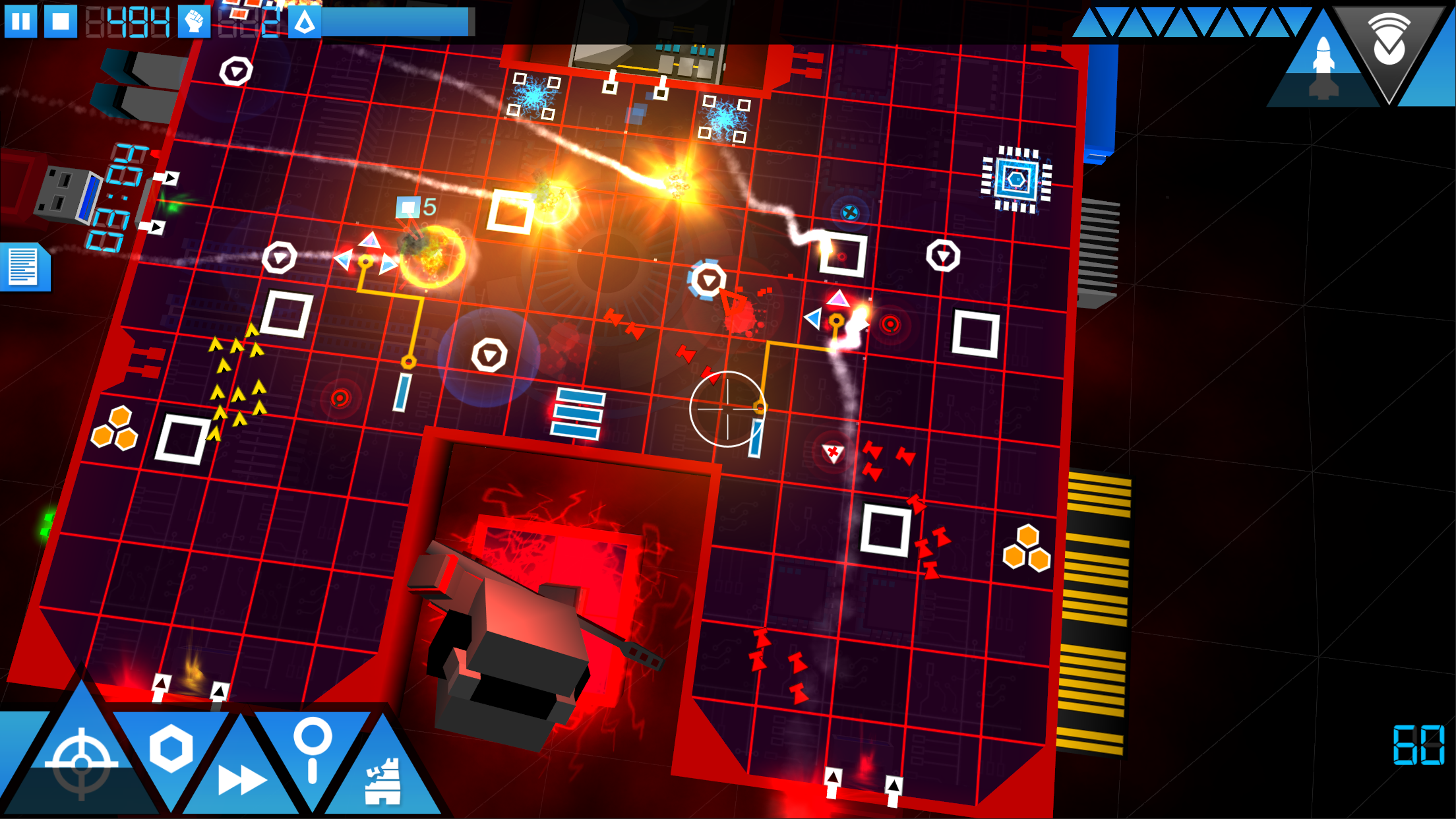 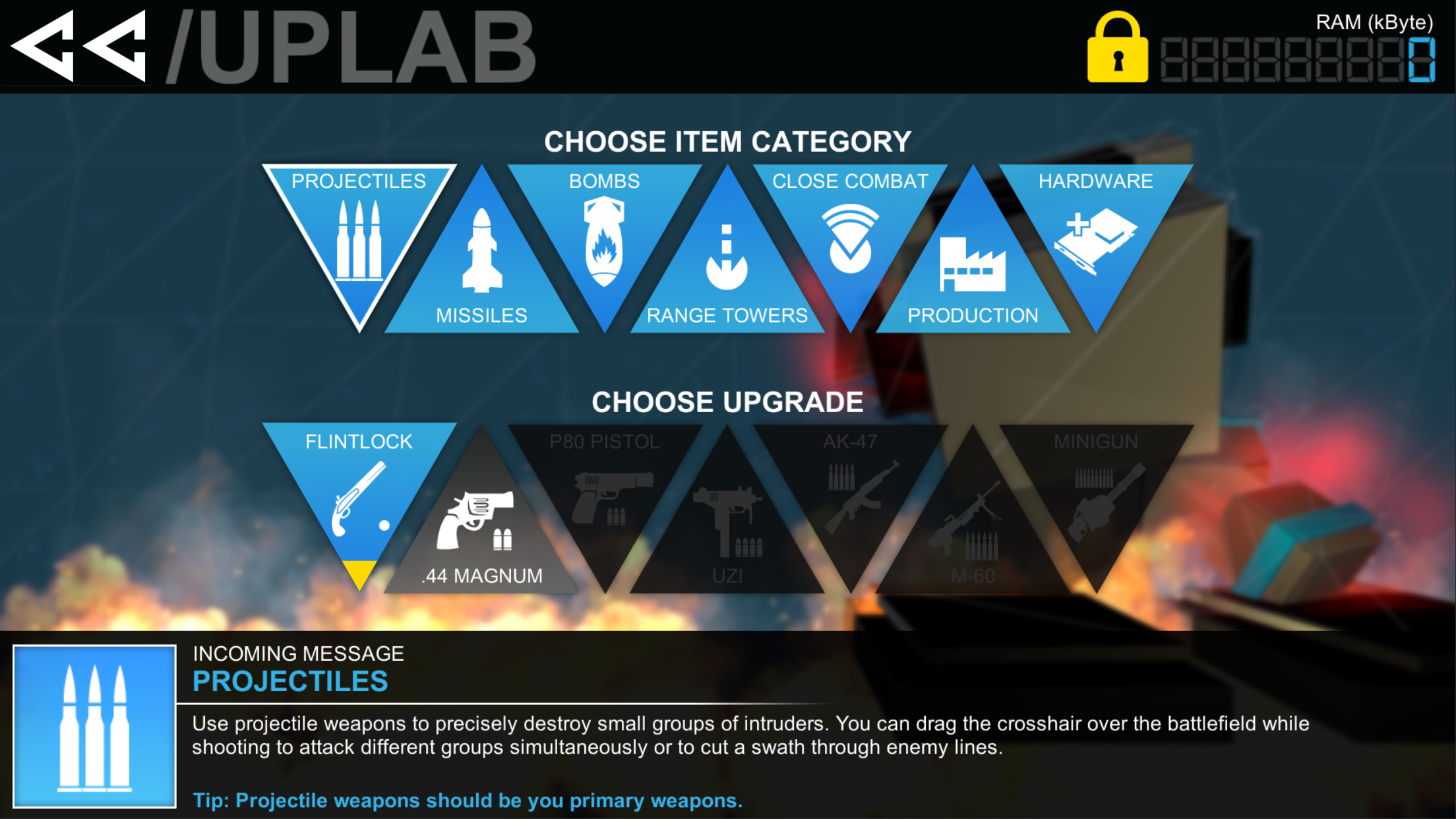 Engine
First of all, I used the Unity engine. I started to develop the game with Unity 4 and moved the game onto the Unity 5 platform some months ago. I really love this development environment.

Platforms
The game is currently available for iOS and Google Play. A steam version got greenlit some days ago and there are a couple of other platforms, which are waiting for my attention. But unfortunately the day has only 24hours and I do not want to rush my releases.

Coding
95% of the game is written in javascript. Some newer parts are written in C#. Yes, it is possible to use both at the same time, but this is definitely not recommended (compilation order trouble). The next game will be a 100% C# project for sure.

3D-GFX
I use blender for all my models and pre-backed animations. I have only some amateurish skills concerning modelling, so I made friends with this abstract virtual reality environment, which does not require complex geometry or any uv-mapped texturing. All models are vertex colored by the way. I really like to skip the texturing phase completely, if I can. 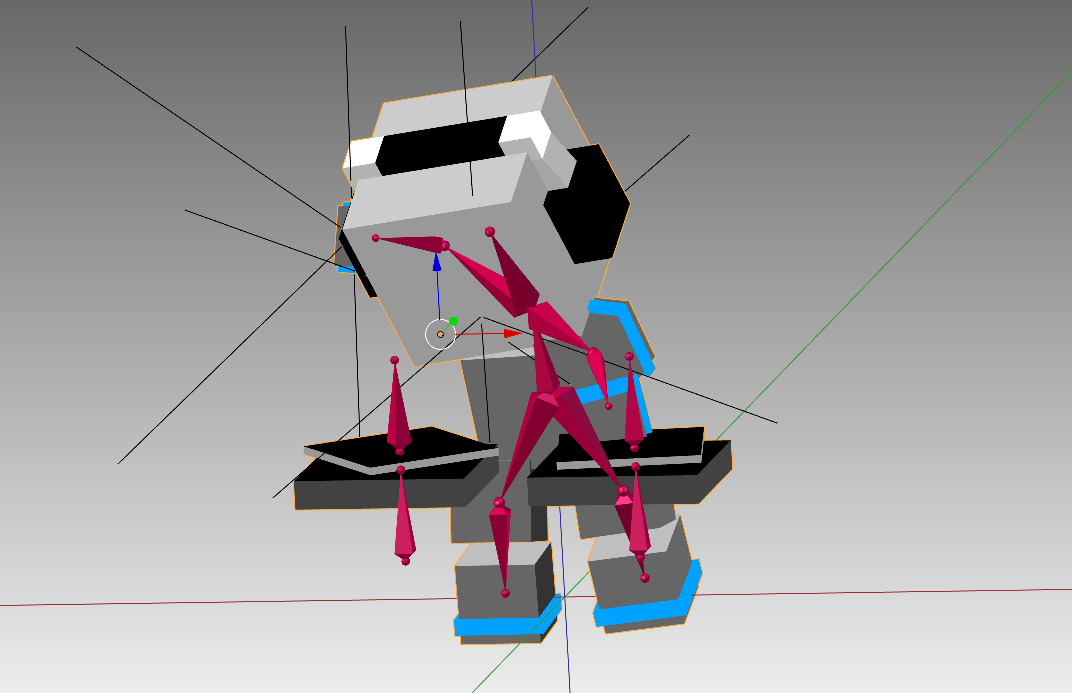 2D-GFX
I use Adobe PS for all ingame textures like: buttons, symbols, etc. In order to stay resolution independent I also often use Illustrator to create button symbols, which are then imported into PS.

SFX
I recorded some of the sounds by myself, actually with my old gaming headset – but most of them are free, creative common sounds. I did the editing using Audacity by the way.

Music
Artificial Defense has 13 different music tracks, so I could not afford a professional studio. In the end I licensed those 13 music tracks – and I am quite happy with it in the moment. Every level (server) has its own music actually.

Voiceover
Well, I used my old headset for this again and edited the recordings then with Audacity. Next time I will hire a voice actor for sure. It would have been so much easier (and much better of course) …

Publishing / Marketing
After I finished the game I actually hoped that the next weeks/months would be more relaxing. But the opposite happened – of course. Marketing is a monster task, especially for a homebody like me – but I am working on it as you can see. ;-)

Planning & Game Design
There are a lot of solo devs out there, who start game projects, but only a few really finish / release a game. Since you have no boss in your neck - forcing your progress, your most valuable solo-development resource is MOTIVATION. If you lose it, your project dies.

In order to have a clear understand of what I am trying to do, I invest weeks into the planning phase, I actually write complete GDDs – Game Design Documents.

Solo development is the opposite of beeing objective
Formulating my game idea and every single gameplay logic helps me to get a much more clinical perspective concerning for my own ideas. Of course everybody likes his own ideas, so you may have to force yourself to a more objective view.

Most game ideas went into the basket before finishing the first 10 gdd pages. The Artificial Defense GDD has about 60 pages by the way – yes, it was a lot of work. But if you can’t find the motivation to finish a proper GDD for your game, chances are very high, that you won’t finish your game project anyway.

GDDs also help you to talk about your game. Maybe you want to show it to some publishers, wait … honestly I never met a publisher who actually read more than the first 5 lines of my document. They are always in a hurry, want to play, not read – so basically you are writing this GDD for yourself – but that’s good enough I guess.

Prototype
After writing a GDD you know the technical needs of your game. I always create prototypes to prove the feasibility. The next image shows one of my first playable prototypes. 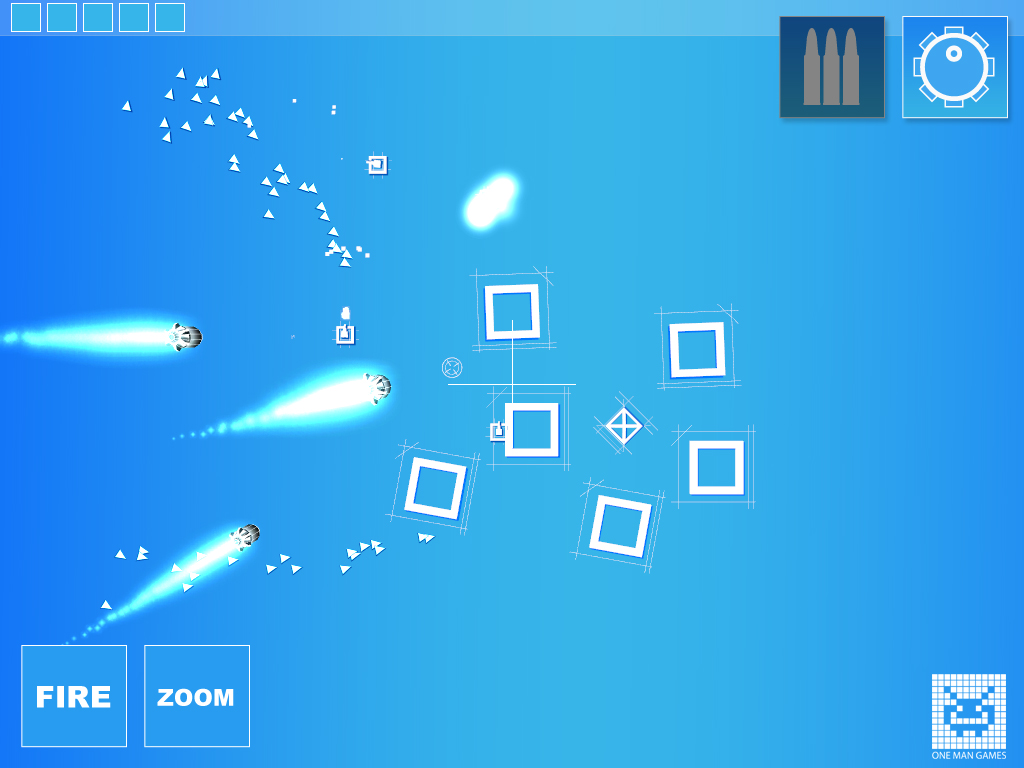 Great ideas
During the prototype phase you will encounter a lot of problems and hopefully the same amount of solutions. As a consequence, the masterplan – as described in your GDD – has to be modified, but I always try to keep as close as possible to the initial idea. New features can destroy a game logic in the same way major bugs do. Of cause there can be quick wins during the development, but I recommend to be very careful with all kinds of masterplan modifications and I avoid spontaneous edits at all. Think about the consequences for the gameplay before you start implementing “great ideas”.

Nice article, thanks for sharing Thiemo! I recently started to dive more into gamedev myself. I picked up GameMaker in the latest HumbleBundle which is quite nice and enables me to realize small ideas quickly. Even though I'm comfortable with C# and basic Unity stuff my overall knowledge of how "things" like particles etc. work is still very limited :]. Also tried to pick-up on blender, but boy is the UI confusing for someone who has absolutely no idea what they're looking for ^^. Looking forward to more dev articles!