Hey guys, Shockworks here with a report of probably the biggest update to Alder’s Blood yet!

Since we are done with the “guts” of the game we can finally slow down and look at the details of Alder’s Blood, talk with the community about their experience and polish the game.

One of the aspects that we felt was something still needing changes was monsters AI. If you played for at least a few hours, you could quickly find a way to abuse the system and instead of playing a stealth game you would play a hit and run game.

I’m not gonna lie, that we were really scared to change that so far into the development of the game, but we took the risk...and it was totally worth it!

The question remains: how does it work now?
When a hunter walks into the vision cone of an enemy he will immediately stop now and the monster reactions start.
This can be a free attack for the monster or an alarming scream, it depends on which monster spotted the hunter.

But wait, there’s more!
Remember how pebbles work? Hunter can throw them to change the direction of the monster, god for cleaning up movement lines right? Well, now every sound will trigger the same reaction.

In practice, you will have to be way more careful with any firearm within the game. As it can be as deadly to the monster as to your hunter.

These two things changed the way you play Alder’s Blood quite dramatically, but only for the better. You need to be more careful with what you do, use your gear way more and try to look for creative ways of dealing with dangerous situations.

Want an example? Here you go!

Here we have a Brawler, quite a strong enemy, more than capable of trashing a single hunter all on his own. We know we won’t be able to bring him down with one shot of the rifle and by shooting we will trigger a reaction. But we have some traps equipped, so let’s use them.
First, let’s place the traps between our gunner and the monster and then open fire. The Brawler takes some damage, then tries to attack the hunter and walks right into the trap!

We are really happy with how the system evolved and we hope you will like it as well. If you are a Backer with the Beta access, you will have the chance to test it very very soon.

If you want to help us and make Alder’s Blood a successful game, wishlist it on Steam! 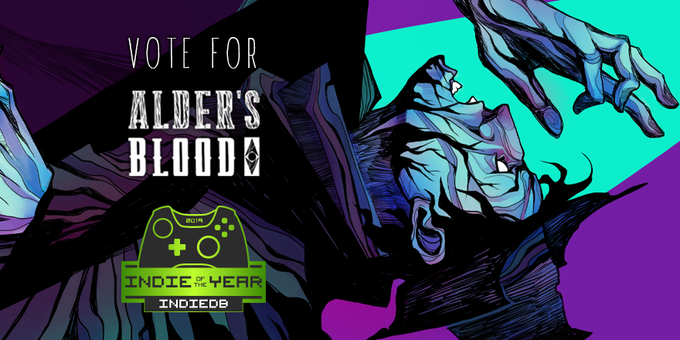 Last but not least - we'll be really grateful if you'd decide to vote for us in IndieDB "Indie of the Year" competition!