Wrath Of The Goliaths: Dinosaurs is a hunting game, set in a future where plants have took over the planet and hunters have to go through intense military type training in order to gain access to the hunting grounds.* The game will features many huntable and unlockable dinosaurs, from Apatosaurus to Tyrannosaurus Rex. The hunter has access to military weapons in order to control the population of the dinosaurs. To begin hunting, the player will use their "perma-money", currency you earn with each kill and depending on the size of the animal, you get more or less. This money is then used as credit, it is your spending limit, but you will have the same amount of money next time you go hunting. Each dinosaur costs a certain amount of currency, and you can not hunt if you go over the budget Death surrounds you as you go hunting through various levels throughout the game, from a crocodilian like monster, to a towering beast who's flick of their tail can kill you. * - A work in progress

Thanks for voting and helping Wrath Of The Goliaths: Dinosaurs on it's quest to become the 2021 Indie of the Year. You are now in with a chance to score some free games. Help this game secure more votes by embedding the widget (or link) we have included below on your favorite sites.

Wrath of the Goliaths: Dinosaurs - Release onto Early Access

Wrath of the Goliaths: Dinosaurs launches today on Steam Early Access. It has been a pleasure to work on this project with the many talents that make up Ascendence Studios. We thank you all for having the patience to watch this project evolve overtime. We hope you are able to enjoy it as it launches into early access with a 33% launch discount!
Hunt several dinosaurs including Carnotaurus, Ceratosaurus, and Allosaurus with a large arsenal of weapons. With over 10 dinosaurs to hunt, and more to unlock, we wish you luck in surviving the Wrath of the Goliaths!
WOGD Early Access Steam Page

The launch is imminent for WOGD, coming this September! Check out the Steam page and teaser trailer here.

The update to the demo fans got to play in December is on it's way! The update after 0.1.0.5 will be on Greenlight!

The Exclusive members on the forum now have their demo! Thank you to everyone who's supported us, and we look forward to being on Steam Greenlight in...

Hi, the game looks fantastic and I have a few questions about it:
1. How big will the map size be, and how many maps (if there are multiple)?
2. Can we tame a select few (like a Pachycephalosaurus) and mount them in game?
3. Is there a goal or rough estimate of the date you have for the Switch version?

1. The first big map is 10km x 10km, we do plan to have more maps later on. Currently more than one map is being worked on, so we are playing around with the idea.

2. At the moment, no. We did play around with the idea of a type hunting "dog"

3. We hope the Switch will be our first console launch, so once we are fiscally able. We will begin work on the Switch version

We will have the game on Steam Greenlight, which we hope will get us onto Steam Early Access. Unfortunately, we don't have a public demo out; and it doesn't seem likely that we will.

cant wait to see some of the animations. maybe some comparison shots of the lower poly vs the highpoly.

We will definitely do that soon :)

As you can hopefully tell, the videos all show case the in-game lowpoly models. And yes we will hopefully have some animations to show very soon!

Thank you! We plan to show off the first map and some animations very soon.

how can we play the game

Either on Steam (Once we go through the Steam Greenlight process) or become an "Exclusive" Member on our forums. 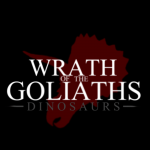 Twitter
Tags
Embed Buttons
Link to Wrath Of The Goliaths: Dinosaurs by selecting a button and using the embed code provided more...