Citadel is a faithful remake of the original game System Shock created in 1994 by Looking Glass Studios. The purpose of this recreation is to present the story of the original to a wider audience, provide an enjoyable experience to a new generation of hackers, and keep true to the original style.

Citadel will also include support for cooperative play, deathmatch.

After release, all assets, tools, editors, and source code will be available so that new levels or mods can be created.

The game is set in the cyberpunk and not too distant future of 2072. You, the hacker, find yourself waking up on board Citadel Station facing an artificial intelligence that has gone rogue taking over the entire space station.

No release for you at the moment.

Shocked? Don't be. Life gets in the way of projects at times. I have had a lot of late nights at work, disrupting business trips, and other personal matters
get in the way of achieving as much on this project as I would have liked by this point. Not to mention that I have had little support from other developers in
creating all of the 3D models needed. I would like to give a tremendous shout out to bastardrodent, however, since he has made half of the enemy models for
Citadel or at least the base unanimated versions. Bastardrodent, if you read this, please know that you have been extremely helpful and thank you for all that
you've done!

Even so, I have a completed a large amount of work on Citadel this year in spite of life getting in the way. Now to get on to the juicy status updates...

Items: Done! Modeled, textured, prefabs made in Unity, code done for using in-game. Items are anything that can be picked up by the player such as hardware,
medkits, and weapons. Whole lotta goodies! 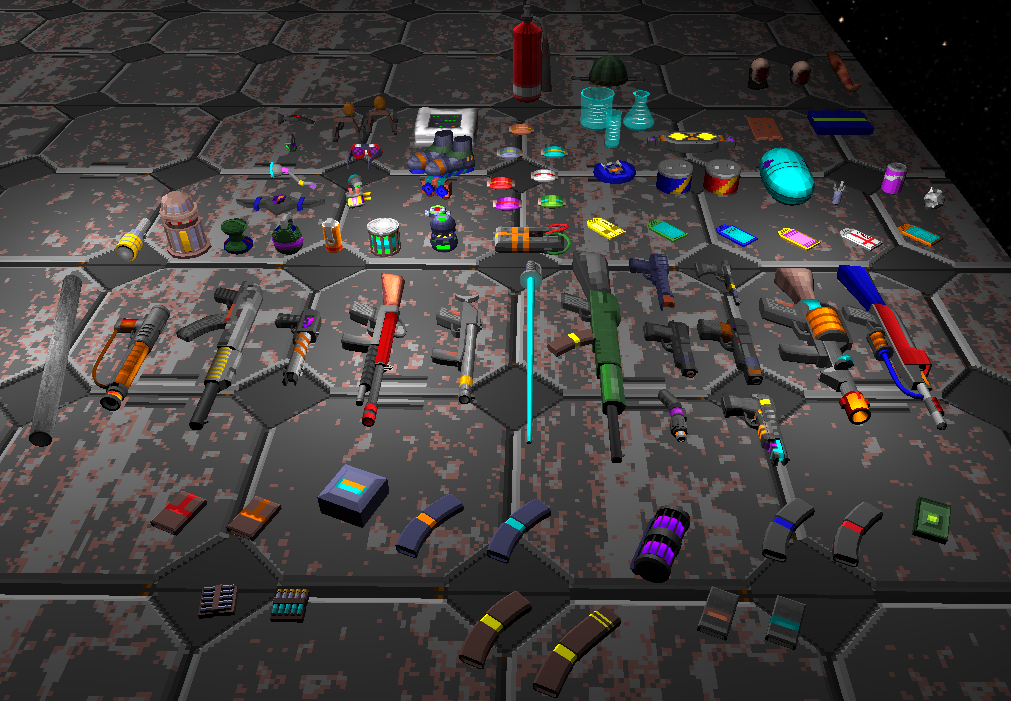 Objects: Done! Modeled, textured, prefabs made in Unity, code done for using in-game. Objects are anything that can't be picked up but that don't make up the
level geometry. For instance, chairs, crates, switches, cyber port, force bridges, etc. 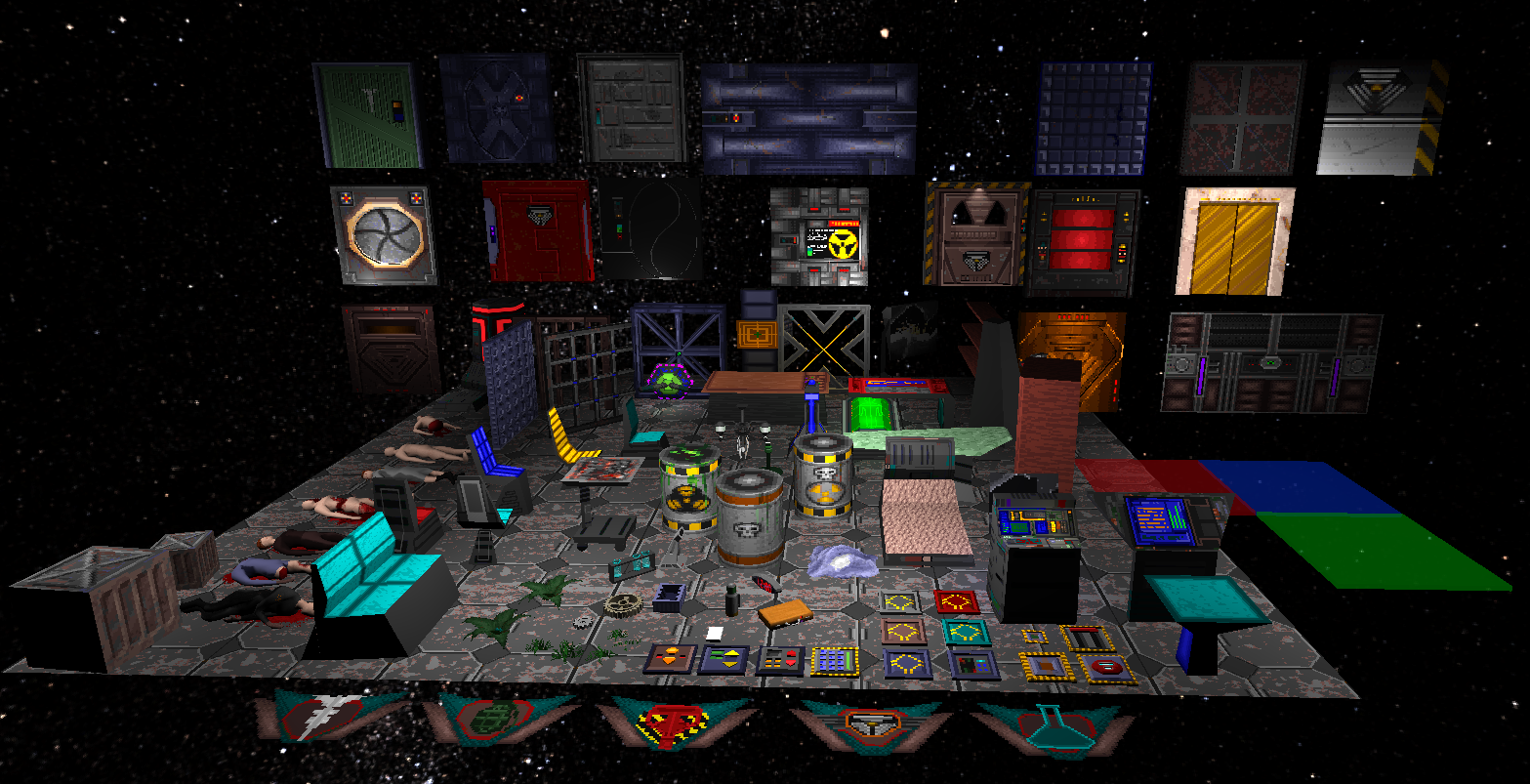 Levels: Initial un-enhanced version done! Base geometry, lighting, level transitions, dynamic object handling code, and saving code are done. Levels are
currently made up of temporary flat cards that will be later enhanced to the higher-poly 3-dimensional level chunks. The enhanced level chunks will cull better,
react with physics more reliably, and allow for enhanced AI pathfinding since they can double as node points. These reasons should offset the impact on
performance from having a higher level of polygons on screen (most graphics cards are optimized for handling large amounts of polygons these days anyways).
Below you can see the subtle yet tremendous impact this will have on the level. This is just the first room to give you a taste of the eventual enhancement: 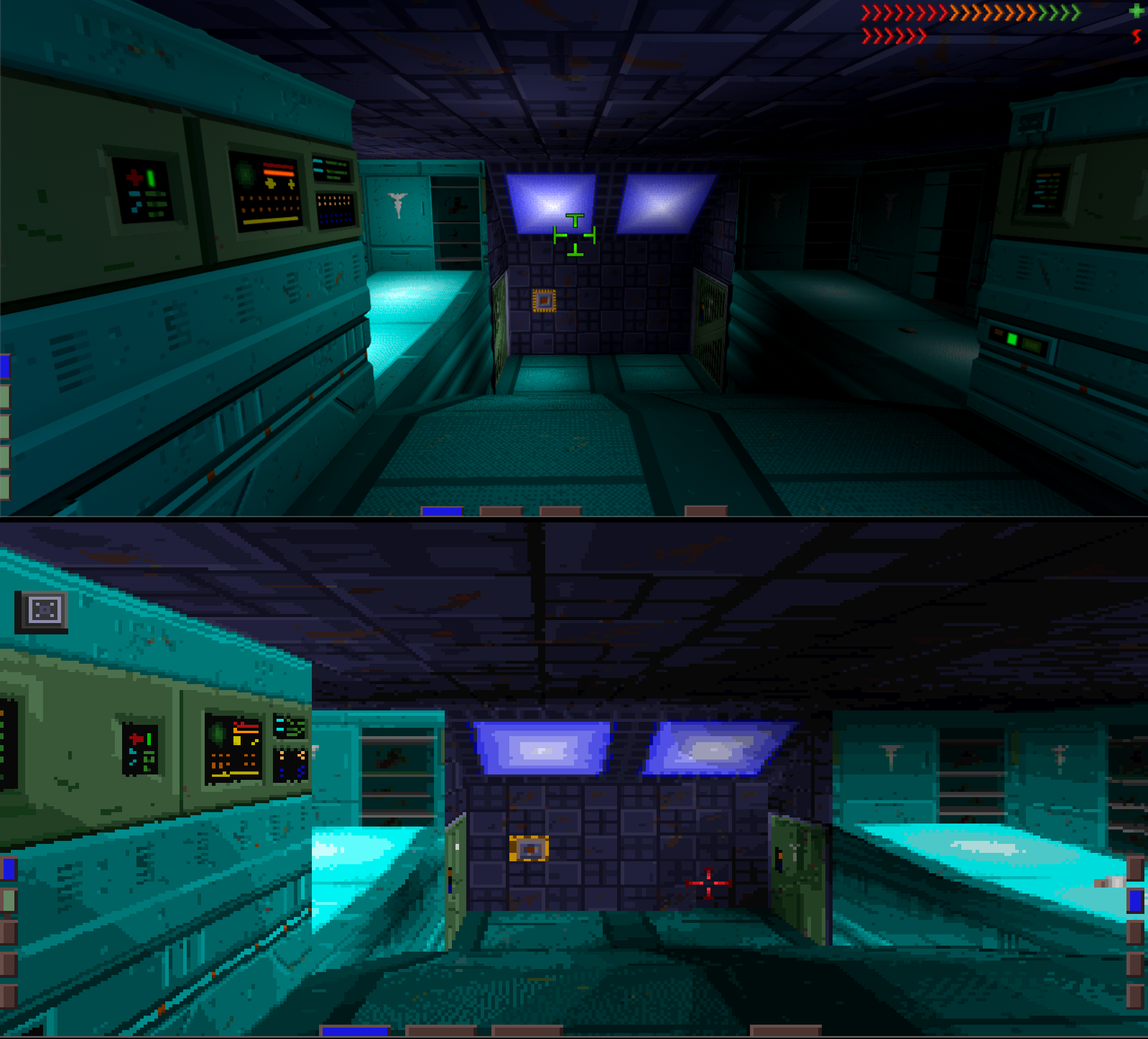 Having modular level chunks also will enable the creation of an easy to use level editor, likely to be a modded version of the Unity editor using Editor scripts.

UI: The in-game HUD is almost finished. The only areas that are incomplete are the data tab of the email reader, in-game minigame player, automap (this will be
nigh on impossible without the above mentioned level chunks, at least for custom levels anyway), and creation of a mirrored righthand MFD panel. Code is
complete that allows for proper handling of which MFD side to use, lefthand or righthand, such that when an action hijacks the MFD (e.g. keypad or puzzle) it
will return to showing the previous data such as weapon stats or automap.

Also, the main menu is nearly complete as well: 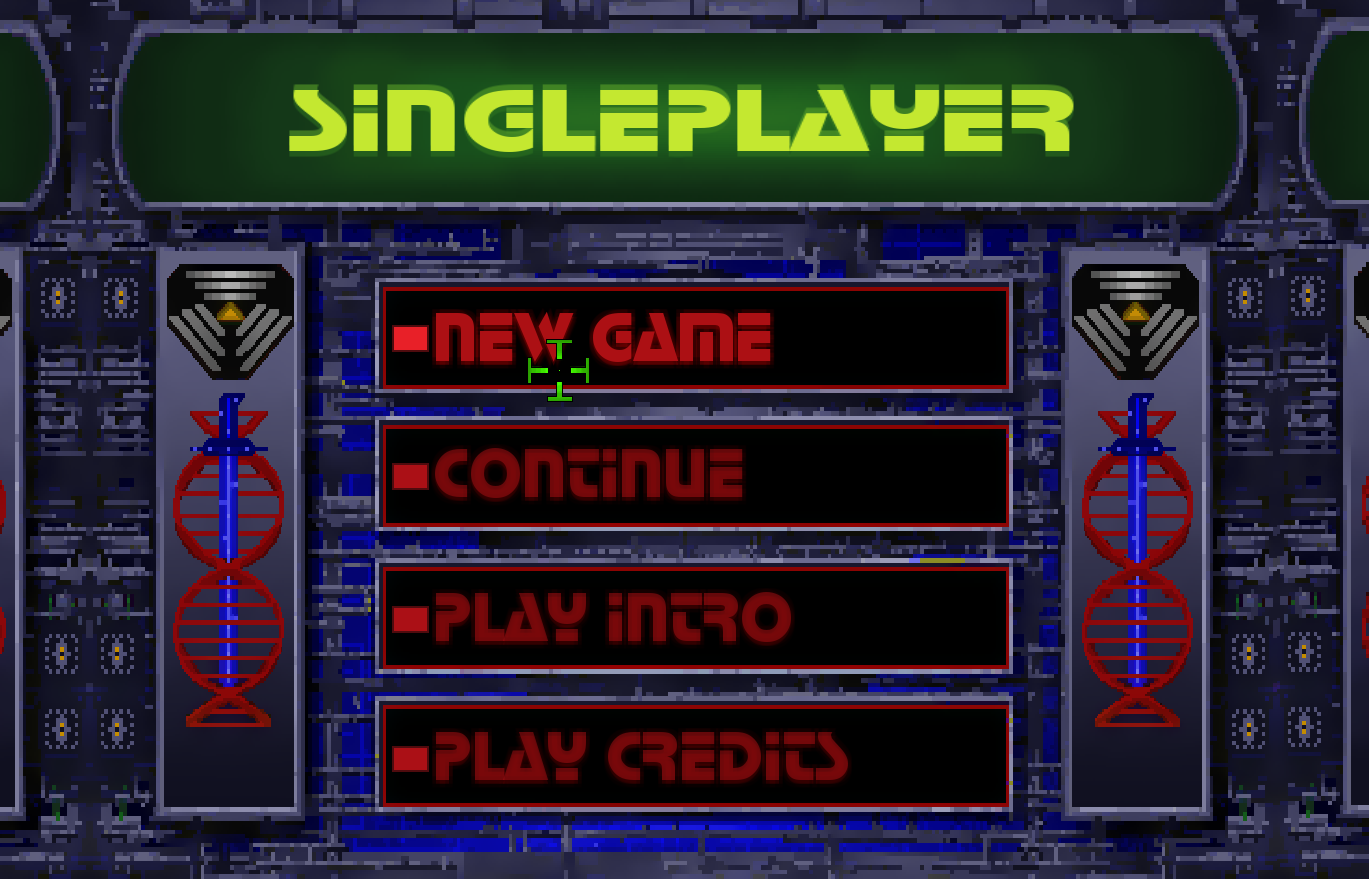 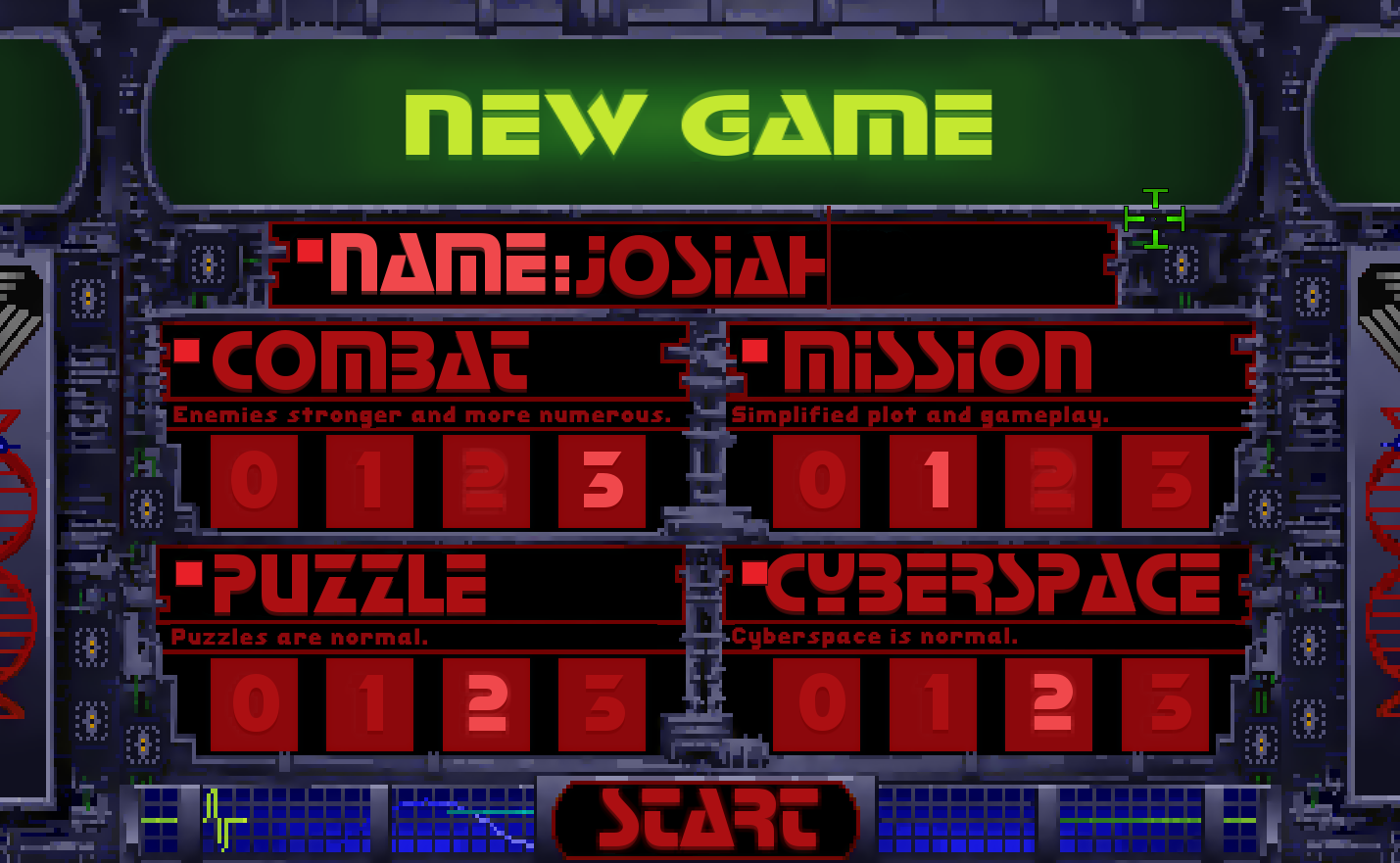 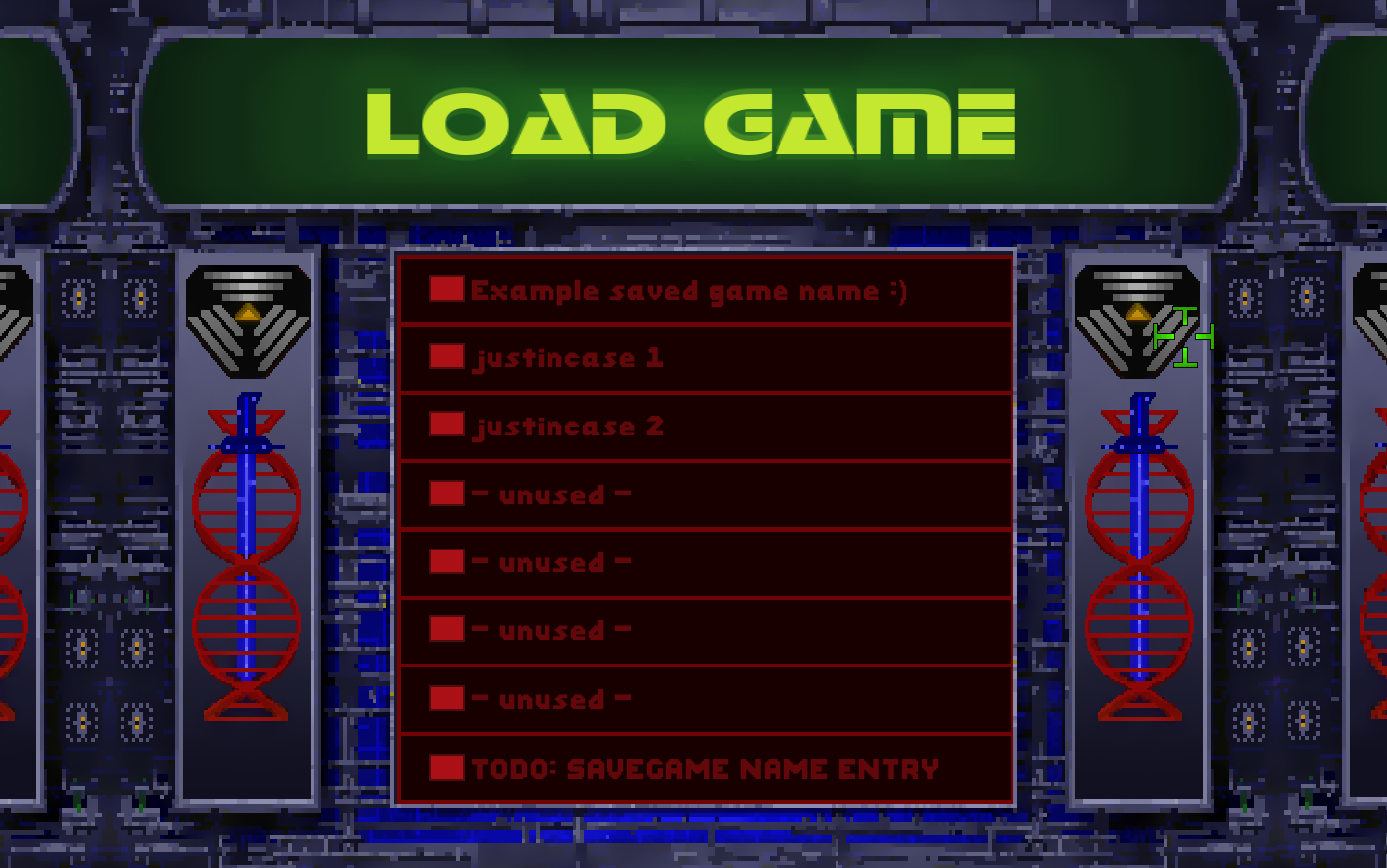 Enemies: Enemies are nearing completion. The only enemies left in need of 3D models are the Cyborg Enforcer, Elite Cyborg, and Security 1 Bot. There are a few
enemies that still need texturing done, such as the cortex reaver, cyborg drone (low res at the moment), zero gravity mutant, cyborg Diego, and a retouch of the
Exec bot. Current status in image form below! All pictures shown are subject to improvement!

The work continues! It will be done "when it's done".

Citadel - Now Being Developed in Unity 5 - And Open Source

Lots of progress since the last news posting! The engine has been changed from the DarkPlaces Engine to Unity 5. The previous engine had some major technical...

We've Been Shocked! Citadel to Be Released Sometime in Spring 2015

Shodan, up to her tricks again, has prevented Citadel from being released this December 23. But don't fear! Hacking on Citadel is going very well.

This is my custom bitfont for UI text in Citadel. Created using BitFontMaker2(TM).

If you've never used the 3D modelling package Blender, download it. Open the .blend file in this download, and use Shift+F to enable fly-thru mode with...

Awesome,something to play while waiting for the official remake.

It is really a shame that this isn't getting like 1,000 times the amount of attention it is currently getting, it looks like it will turn out really good

Will send out closed test builds with all 3 Win, MAC, Linux tomorrow evening. I want to polish up a few things first and double check for any gamebreakers tonight and part of tomorrow evening.

I had some work issues so it will be a little bit yet until I can send out test builds.

what is the current progress on the game?

Slowly but surely bugs are getting fixed. Some are taking way longer to track down than one would think. About to send out 3rd round of closed alpha builds.