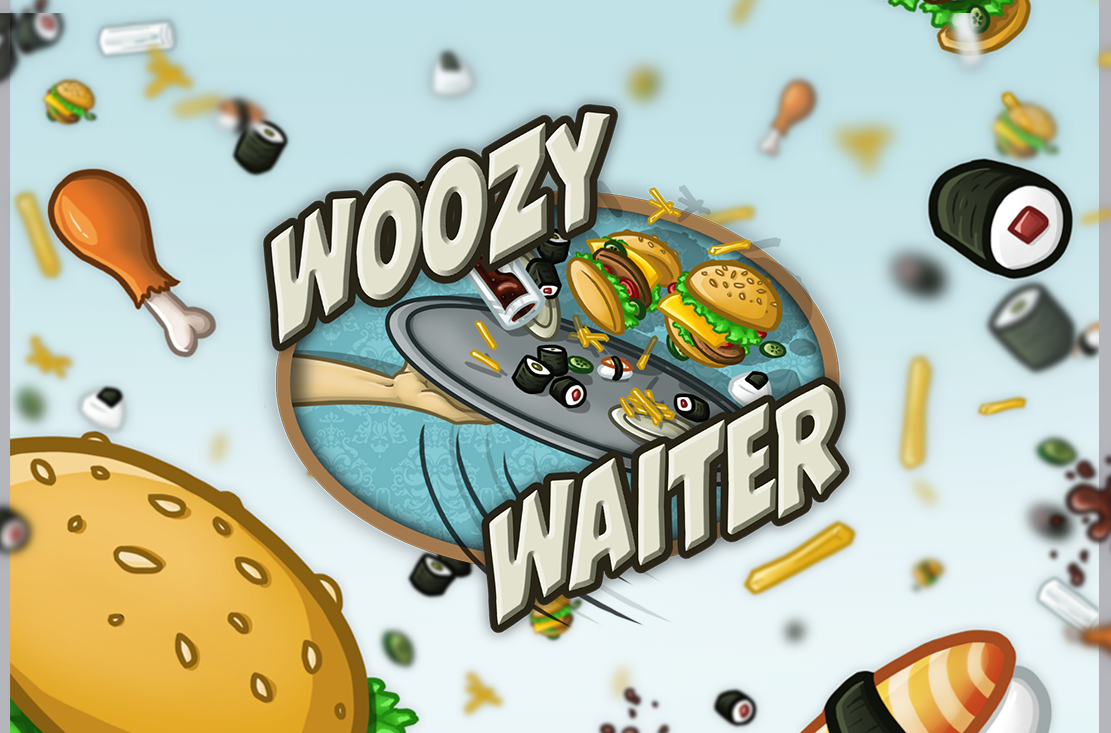 Woozy Waiter is a game played on Windows machines, using both a Tobii EyeX eye tracker and a Sphero. Woozy Waiter is a first-person, physics-based party game, aimed at a casual audience of ages.
The webplayer as well as the windows build include support for Keyboard and Mouse where WASD is used to control both the character as well as the tray and the mouse to look at tables & get information regarding their status.

The objective of Woozy Waiter is to deliver restaurant products to tables as a waiter. To do this, players need to navigate through a restaurant, manoeuvring around tables, chairs and people sitting in the restaurant. All tables that the player needs to deliver their food to have a timer above them, which is of random duration and can be anywhere between 30 seconds to 6 minutes.

The game ends when a player successfully delivers food to all tables. Any amount of delivered food is counted as a success. The game will also end when a player drops all food on their plate, which happens when a player fails to balance their plate using the Sphero. The challenge here is that the Sphero is also used to control the player's movements, meaning that to move around the restaurant space the player has to tilt their plate of food in different angles constantly. The goal of the game is to get the highest score possible based on the amount of food delivered.

Our art style is a stylized, cartoony, low poly style. It features art that resembles Rayman Raving Rabbits, whilst keeping reality in mind. It creates low poly cartoony assets based on real life objects and locations.

In the Woozy Waiter, the player assumes to role of a drunk waiter who has to deliver food to the tables of hungry customers. The art style should reflect and suit the type of gameplay, so we chose for a style which could emphasize on the funky setting: a stylized, cartoony, low poly style. We made sure to make good use of different colours, which is often identified with a fun and humoristic situation (a drunk waiter).

The game is set in a restaurant environment, players navigate through a filled up environment with medium sized objects

Controlling movement and balancing with the Sphero

Focusing on timers using the Eyetracker

Whilst the player has to focus on not dropping their tray and its contents they also have to look around to each table to reveal said table's timer, this is done with a Tobii EyeX or the Mouse. The Tobii EyeX eye tracker will track which table the player is looking at, and will reveal the amount of time left before that table runs out of time and the customers won't pay anymore. This creates a dynamic where players will constantly want to look at their plate to make sure it's balanced correctly, but also have to look around the room to the various timers around the room and have a chance to slip up and drop their plate.

The objective of the game is to deliver plates to all tables with a timer above them. These timers are allocated randomly and are also of random length, though with some logic behind them. At the start of the game or when a player goes back to the kitchen for another delivery, food is dropped on the player's plate through a chute. The player can then deliver the food to any table they wish (though they should go for the table with the least time remaining). Food delivery happens automatically when the player is close to the table. The player then receives a tip, which when delivered back to the kitchen results in some amount of scorepoints. This cycle repeats itself until the player drops their plate or delivers all food.

When a player successfully delivers a serving tray full of food, they receive a number of gold bars (points) that count toward their high score. This amount is based on the time they needed to deliver the serving tray. When the player arrives at a table that still has time left on its timer the food is automatically removed from the tray and replaced with gold bars. These gold bars need to be delivered at the food pick-up point near the kitchen. When the player delivers these bars they will count towards the total high score of the player. The score is always displayed prominently on screen, and is what players can use to compare their performance with each other.

The restaurant scene is filled with objects: tables, chairs, people, plants and fish tanks. The player needs to avoid these obstacles else they will drop their entire serving tray, and/or the food on it, resulting in a game loss. Another conflict stems from the timers of different durations above each table - the player has to look at each table, evaluate how look it will take them to reach them and prioritize different tables for delivery accordingly.

The audio that is in Woozy Waiter has a comedic over-the-top feel to it, similar to the art style. For example, when food falls of the tray an enormous wave of glass falling on the floor is played. Any background audio, such as the murmur of customers in the restaurant, are a bit more realistic, in an attempt to not draw too much attention.

Woozy Waiter is the initial release for this project. We created this prototype in around 4 days to research market value for this genre of games and to see whether it is worth it to continue development. We have received some valuable feedback and noticed a wide public who is interested in this game on either PC or Mobile markets. We hope to continue development soon and plan on submitting new versions to IndieDB whenever we have the time to.

9 Controls / How To Play

The IndieDB version has no tutorial in the game screen. This is the full version playable with a Sphero and Tobii EyeX as well as Keyboard and Mouse!

Using Keyboard and Mouse:
- Tap the W.A.S.D. keys to alter the character's direction and to tilt the tray.
- Tap the Q & E keys to rotate the camera to the left and to the right.
- Aim at tables using the Mouse to see the timers which show the time that remains to deliver food to the table.

Sphero (2.0) Connect:
- Connect your Sphero to your pc via Bluetooth.
- Find the COM port the Sphero is connected to (usually two, remember the top one, so if 3 and 4 are connected you need to remember 3).
- Fill in the COM port in the menu & press connect, wait until the game says connected. If this does not work either your Sphero is not connected or the false COM port is entered.
- Hold the Sphero in your hand, tilt your wrist forward and backward, assure the green bar moves straight away and towards you, you can alter it's rotation with the slider.
- If the green bar is calibrated correctly rotate the Sphero on it's Y axis until the blue bar points away from the screen and the red bar is aimed at the right.
- Now you are ready to start the game while using the Sphero as a controller, the game will automatically disable keyboard controls once a Sphero is connected.

Tobii EyeX Connect:
- Connect & Calibrate your Tobii EyeX .
- The game will automatically recognize the device and disable the mouse, look at tables within the game to show the times.

Play the game at:
Yanknoop.itch.io
or
Kongregate.com

Thanks for voting and helping Woozy Waiter on it's quest to become the 2021 Indie of the Year. You are now in with a chance to score some free games. Help this game secure more votes by embedding the widget (or link) we have included below on your favorite sites.

A full build of the current version of Woozy Waiter. This build can be played using Keyboard & Mouse (Similar to the Itch and Kongregate web build) or...

I made a gameplay video of your game - Youtu.be
Nice game :)

It's pure fun!
I started laughing when I watched the trailer.
I didn't stop until I had played several sessions. Guys, you're awesome!
I played using keyboard and it was hard, really hard, but I was happy when I managed to earn some money)
Thank you! ;)

Woosyy.. DID HIS FOOD TURN INTO GOLD!?

Just like Infinitrap Classic but with all the flaws removed :)

Protect an oyster from sea monsters that are tired of hearing his puns.

Alien Patrol is a fast-paced comedy shooting game that puts the player in the shoes of a grumpy rural gentleman who spends most of his time neutralizing...