We are Clyde (may not be the final name) is a game set in the same reality as Brilliant Blue-G's platformer Chester. It is not a direct sequel and will have a completely different gameplay style but will feature several recurring themes and characters. Support for the Oculus Rift is planned.

Introducing We Are Clyde 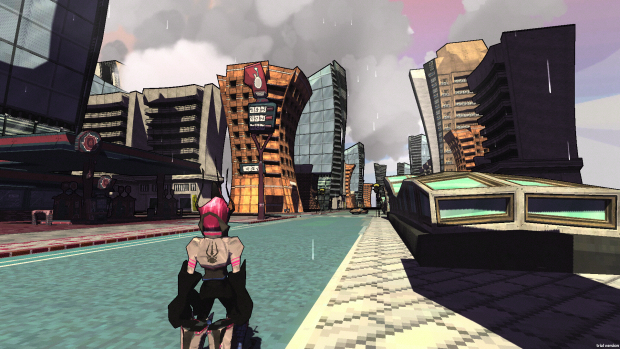 We Are Clyde is the upcoming third person action/exploration title from Brilliant Blue-G. Set in a world where pretty much everything is powered by cans of spraypaint, it is up to Clyde to track down and stop a mysterious and destructive foe known only as The Destroyer.

WaC will feature environments loosely based off a real world locations, a unique art style, third person action and exploration, and (hopefully) support for the Oculus Rift. It will also be set in the same "Chester-verse" as Brilliant Blue-G's Chester, but is not a direct sequel.

The game is currently being developed for Windows, Mac, and Linux and is targeting a late 2013/early 2014 release.

looks really cool, can't wait to see some video of this in action! tracking.

Hoping to get a short video or two up soon, possibly over this next week!

I like the graphic style, it has a lovely Jet Set Radio feeling

Thanks, that has definitely been one of the main inspirations while working on this.

We are Clyde Third Person Shooter
Play With

Oculus Rift Oculus Headset
Tags
Embed Buttons
Link to We are Clyde by selecting a button and using the embed code provided more...