Short Information about Warmerise:-
-------------------------------------------------------------
Game Type: First Person Shooter multiplayer browser game-
Game Modes: Elimination Game Mode (EGM), Team Deathmatch (TDM)-
Maps: SkyGates, Zone A, Snowy Canyon-
Weapons: Machine Gun, Rocket Launcher, Sniper Rifle, Flame Thrower, Heavy Machinegun, Shotgun. Each weapon could be upgraded in upgrade menu (NOTE: weapon could be upgraded after reaching certain number of kills - individual for every type)- Ability to use JetPack instead of normal jump (Hold Space in game)So if you interested in this game, you are welcome to try it on official website (It's Free!)To see screenshots and other updates, check official facebook pagefacebook warmeriseNOTE: This game is still in Alpha stage, so new stuff will be added in future updates dailyAlso since web player is streamed, after main menu is loaded, wait around 1 -2 mins till all maps are loaded too

Version - 1.2.2 (31.12.2012)
-Removed CTA game mode
-Added new game mode EGM - Elimination game mode. Now match is splitted into small rounds. Each match have 10 rounds. In order to win, one team need to eliminate other. Round ends if there is no players left in some team or time is over
-Added new weapon - Shotgun
-Added Mini and Duel rooms for each map

Version - 1.1.6 (28.12.2012)
-Added game mode notfication near score tab
-Reduced machine gun fire sound intensity for a bit
-Now all players are sorted correctly by kills. Fixed bug when sometimes player with most kills wasnt at the top of list

Version - 1.1.3 (27.12.2012)
-Changed Machine Gun fire sound
-Added notification for hit direction. Now player is able to see from where he got shot.
(NOTE: It not indicates enemy player position but the part of our player which received damage impact
-Other small fixes and improvements

Verison - 1.1.1 (25.12.2012)
-Added armory points (1 on each base). So in order to change weapon, player should walk inside area and press G - default key
-Added ability to zoom with each weapon (RMB - default key)
-Improved room liist menu
-Added 3 extra rooms for each map with 8 players limit and TDM game mode

Version - 0.8.7 (10.12.2012)
-Added new field (Map/Game Mode rotation). The name speak for itself. In rooms with Rotation mode enabled, after round is finished Map/Game Mode are changed randomly
-Other small improvements

Version - 0.8.6 (9.12.2012)
-Now after player was killed, it drops the weapon which was holding before. When other player pick it up, ammo from that weapon adds to our which is correspond to picked. Also ammo quantity we can pick is same as player had before got killed
-Added sound effect and screen effect for picking up dropped guns
-Now player can shoot even when falling
-Minor bug fixes and improvements

Version - 0.8.1 (4.12.2012)
Changes for CTA (Catch the Area) mode:
-Added spectator mode
-Now when player got killed, will not able to respawn till next round
-Team got win if one of next conditions are done:
1. Opposite team were eliminated
2. Area were holded for certain time
3. Round time is over and team with more points win (Draw is possible for all previous conditions)
-CTA round duration were changed to 2 min 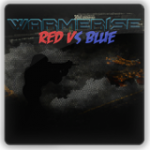 Tags
Embed Buttons
Link to Warmerise | Red vs Blue by selecting a button and using the embed code provided more...