War of Rights is a multiplayer game set during the perilous days of the American Civil War, in the Maryland Campaign of September, 1862. Campfire Games is devoted to presenting the gruesome and glorious elements of the period, while maintaining the highest level of historical accuracy and realism as is possible with the wonders of CRYENGINE.

Players in the game will be able to play on multiple battlefields of the campaign, from the confluence of the Potomac and Shenandoah Rivers where the Siege of Harper's Ferry took place, to the ridgelines of South Mountain, and to the meandering waters of Antietam Creek at the Battle of Antietam. Additionally, players will also be able to choose from a list of regiments that fought in each battle as well as what rank to fight as, whether they want to slog it out as a lowly private, or if you want to orchestrate the carnage and mayhem as a major general.

Uniforms and bodily features will all be customizable for other players to see as you march and fight in the lines of battle according to the tactics of the period. As a General, you will operate in your headquarters equiped with a map of the battlefield and constantly receiving reports of friendly and enemy positions. Send out new orders to the regiments to move forward, or fall back - all in real time. The orders will move down the chain of command, to the Colonels, Majors, down to the Captains in charge of the individual regiments, all of whom have the option to follow the orders of their trusted commander, or rebel against his wishes and fight as you see fit.

Each map contains a period reconstruction of the buildings, farms, forests, roads & rocks that existed so players can fight through the streets of Harper's Ferry, in the wooded heights of Fox's Gap at South Mountain, or in the wheatfields and Bloody Lanes of Antietam. Players can feel the whiz of deadly shot and shell fly by their bodies, or hit their comrades or themselves as they scream in a bloody hail from their wounds. Limbs will fly and blood will be spilt once again as Campfire Games brings the fighting of the Civil War right to the player's computer screen!

Will you heed the Union call against the traitors? Or will you fight to defend your family and livelyhood with the Confederacy? You decide!

Hello and welcome to our thirty-third field report!

Today, we have just released the final content update of the year for the Technical Alpha: The Winter Edition! While we all wait on Skirmishes, the first combat oriented test phase to arrive (more on that later) we thought some visual change would do our Technical Alpha testers good. 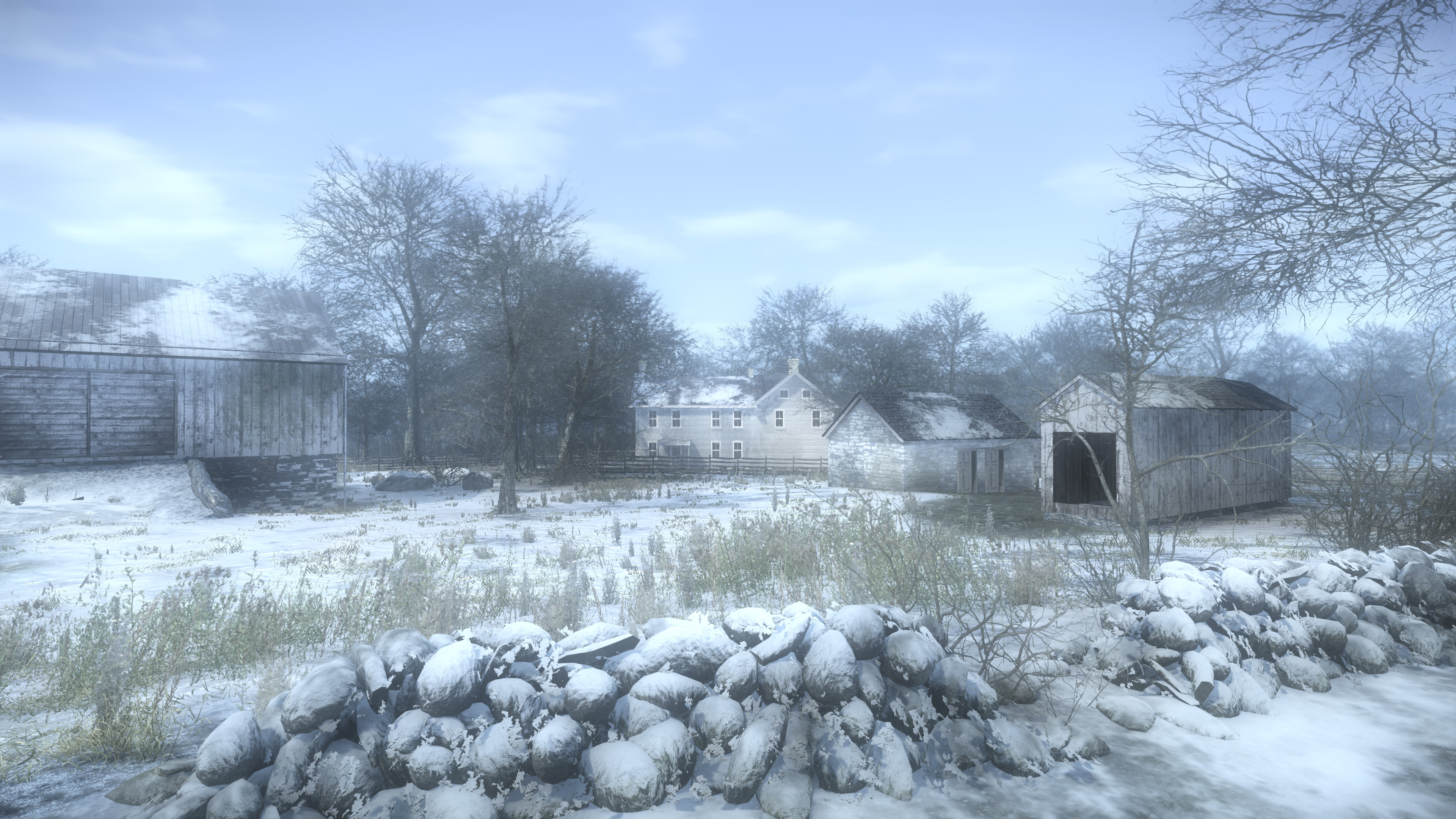 The entire playable drill camp areas have been updated in order to better reflect the season of the holidays. This change is by no means considered by us as a “complete” graphical change from late summer to winter however - it’s primarily meant as an event update and will soon enough make room for the standard drill camp. 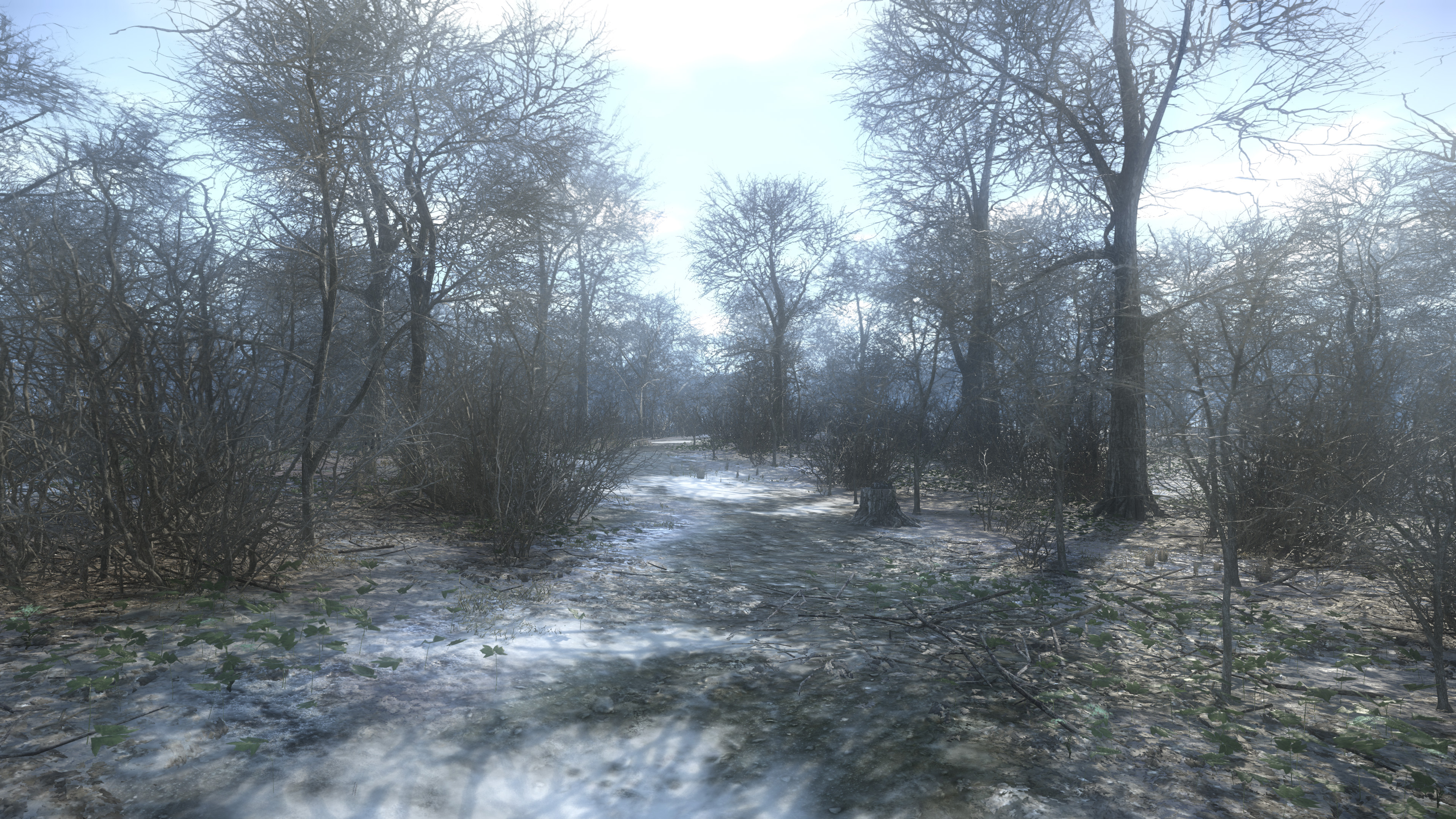 The whole process was a relatively quick one - about 7 days of work for a couple of developers on the team. That being said, the foundation laid by the work done will be able to be expanded upon should we ever cover engagements in the winter. 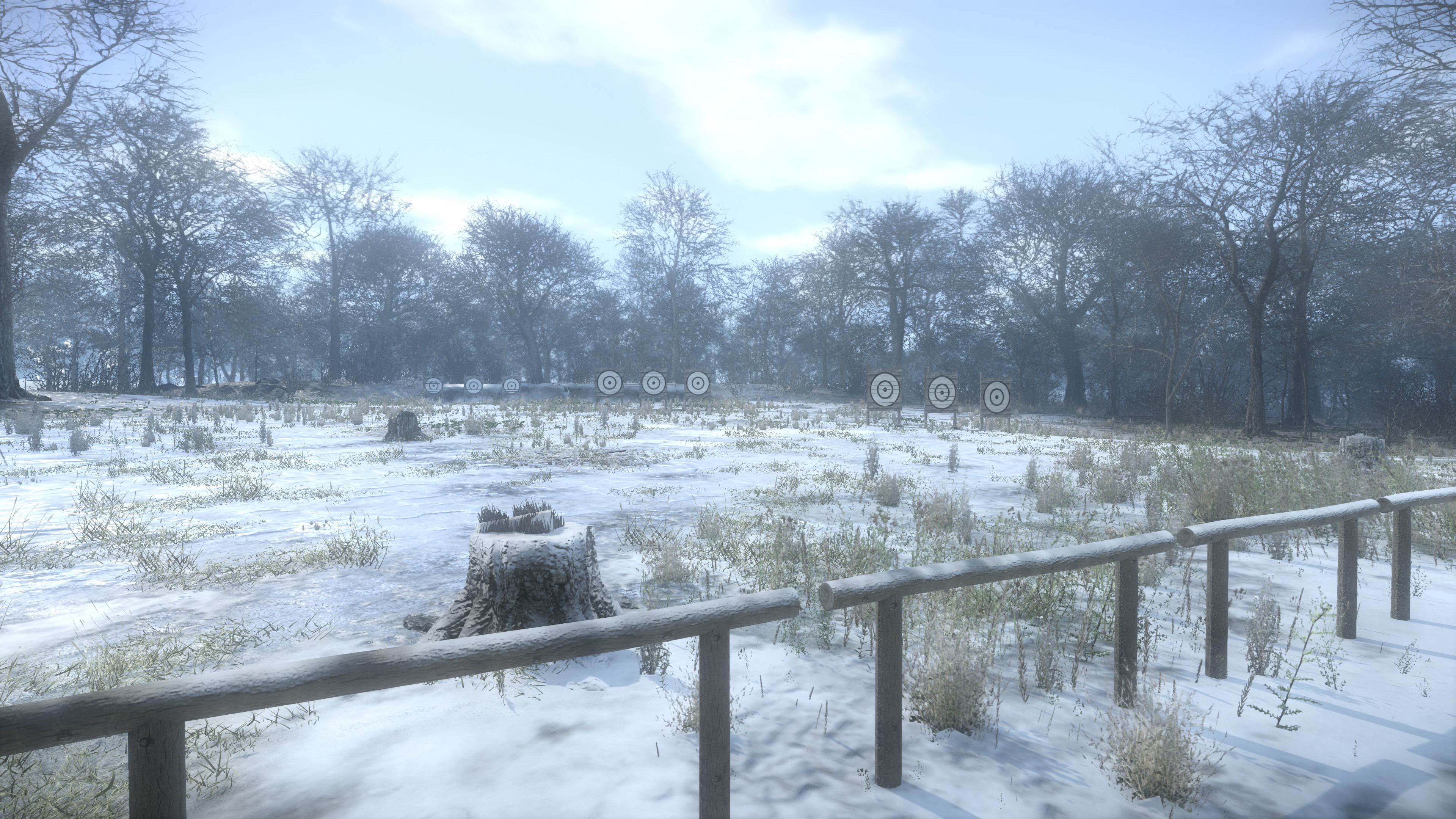 Apart from the obvious changes in visuals, the update also brings new wintery sounds as well as slippery frozen lakes. 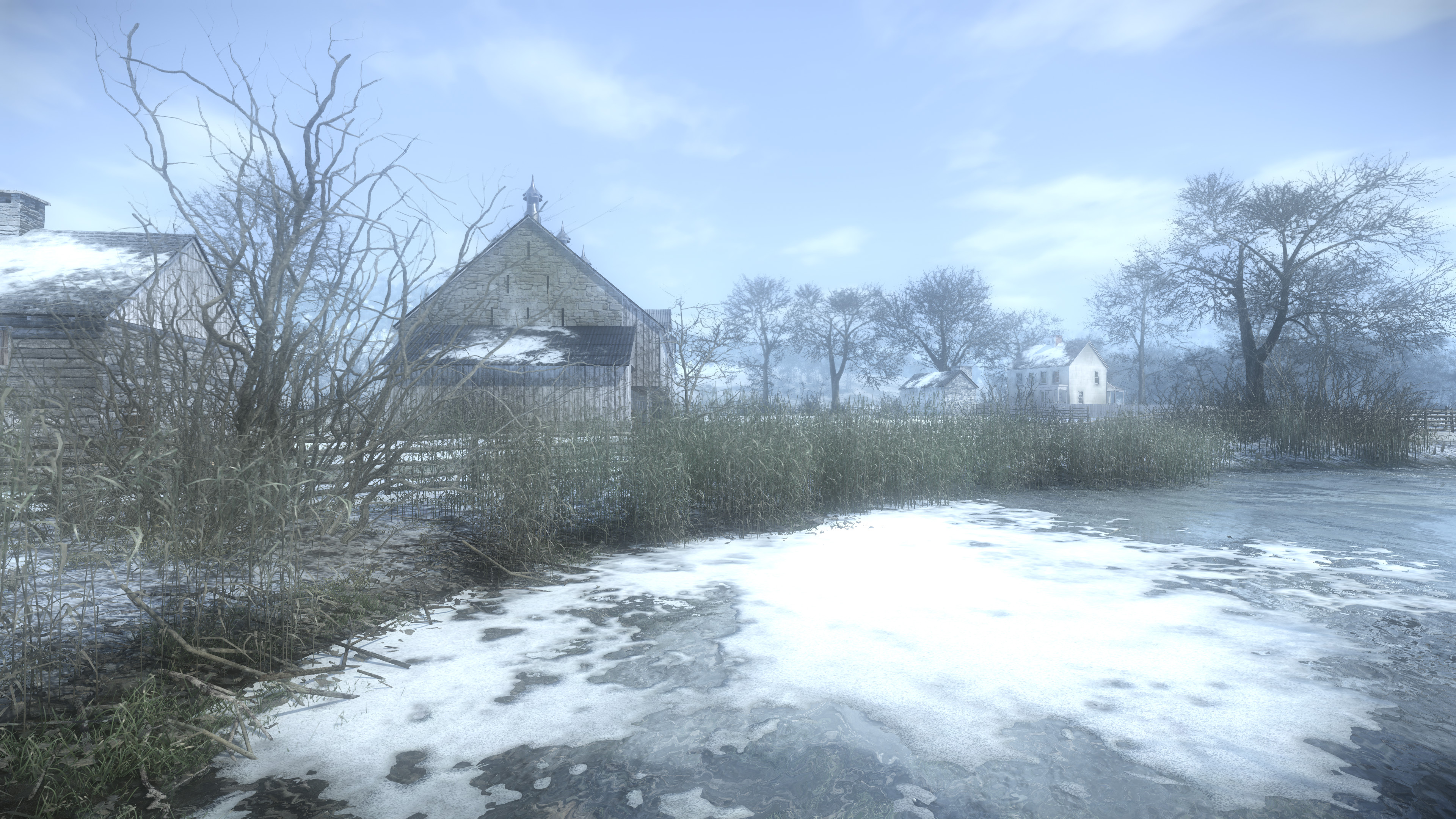 The winter update marks the beginning of a bit of a break in updates for the Technical Alpha as the team celebrates Christmas and the start of a new year. Have no fear though, we’ll be back in early 2017 well rested and ready to push forward! 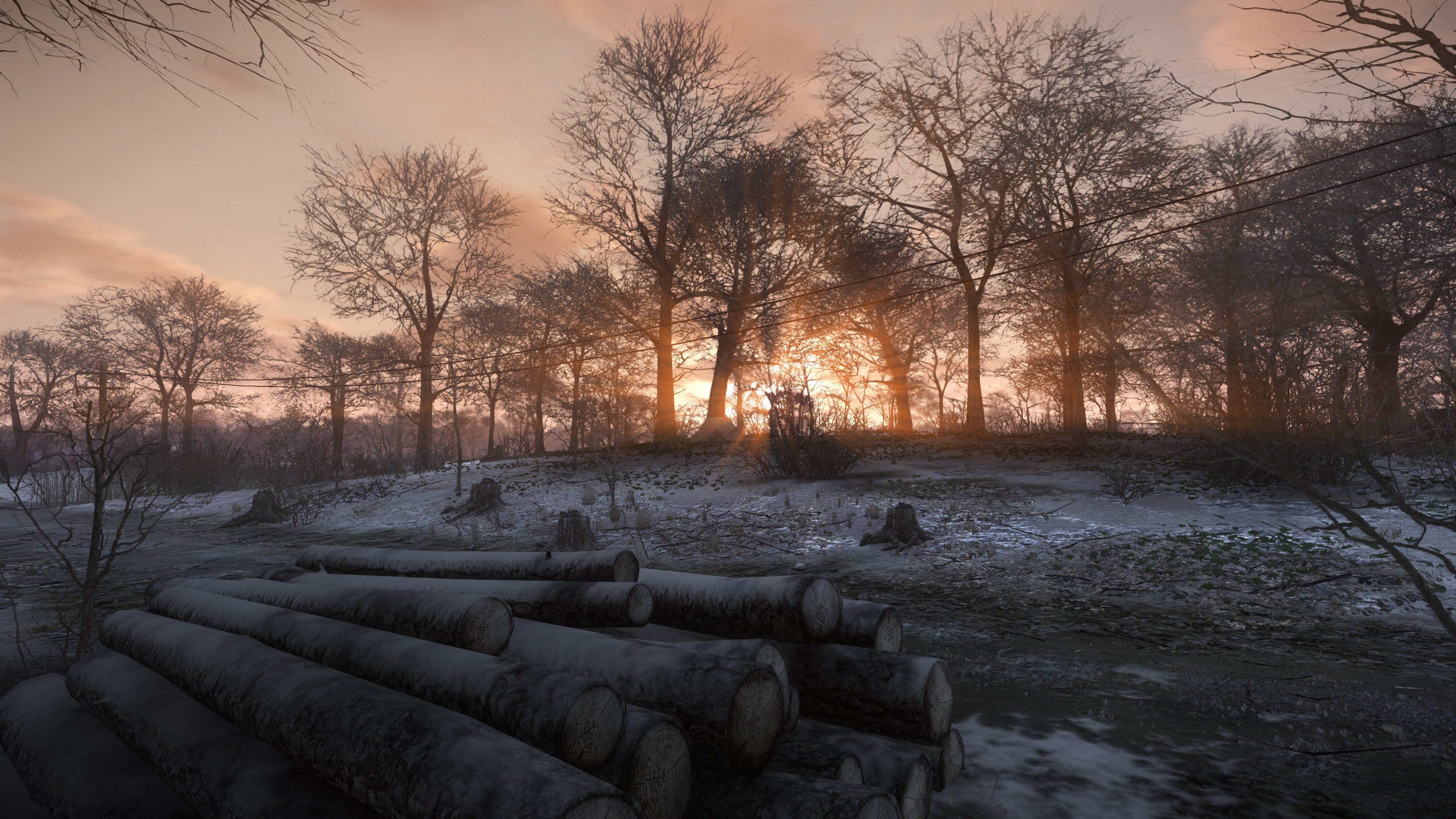 Looking ahead.. And a tad back

Before leaving we promised to talk a bit more about Skirmishes so here goes. The programmers are still hard at work on the core systems needed before we can release the first Skirmish areas. Some of those systems include capture areas, ticket systems, spawn mechanics, etc. They are progressing steadily and we expect we’ll be able to kill each other in glorious combat before too long - sometime in early 2017 is a good bet.

While we can’t give you a set release date yet we can give you a bit of information about what the very first Skirmish release is going to include.

While tempting to throw all or most of the planned Skirmish areas out there with the very first update we’re not going to be doing so. Instead, we’ll start with the release of three areas and make sure they play right in terms of balance before releasing more.

The initial three Skirmish areas released will be some very well known ones.

The skirmish of Dunker Church will be based upon Greene’s 2nd Division of the 12th Corps push towards, and eventually past, Dunker Church and into the West Woods. The Union direction of attack will thus be from the direction of the Mumma Farm as seen in the screenshot below. 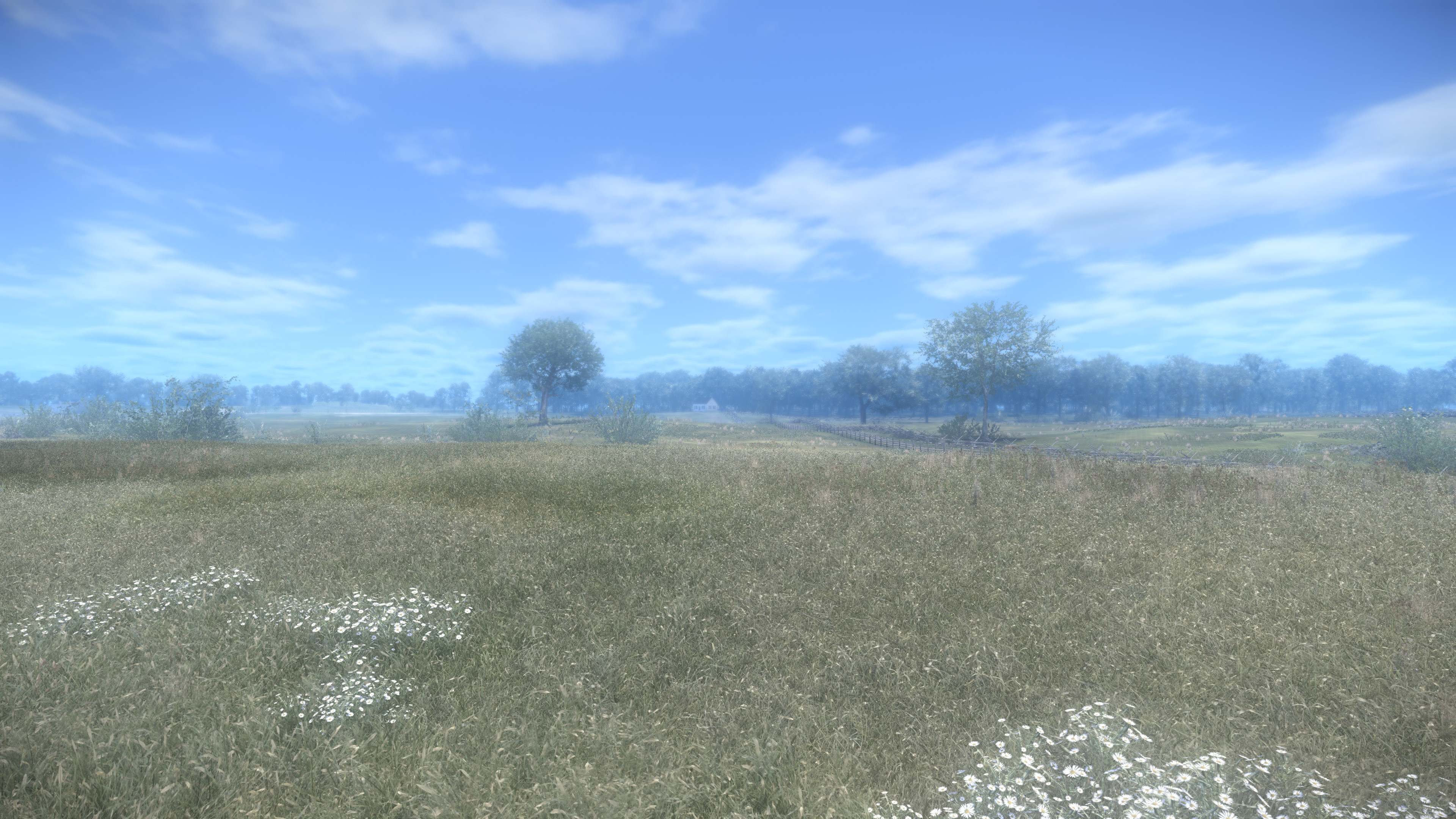 The Confederates are going to be spawning a ways in the West Woods at the location of Walker’s Division and will have to rush forward to defend the area surrounding Dunker Church. The screenshot below shows the view from just in front of Dunker Church, with the Hagerstown Turnpike to the left and Smoketown Road to the center. 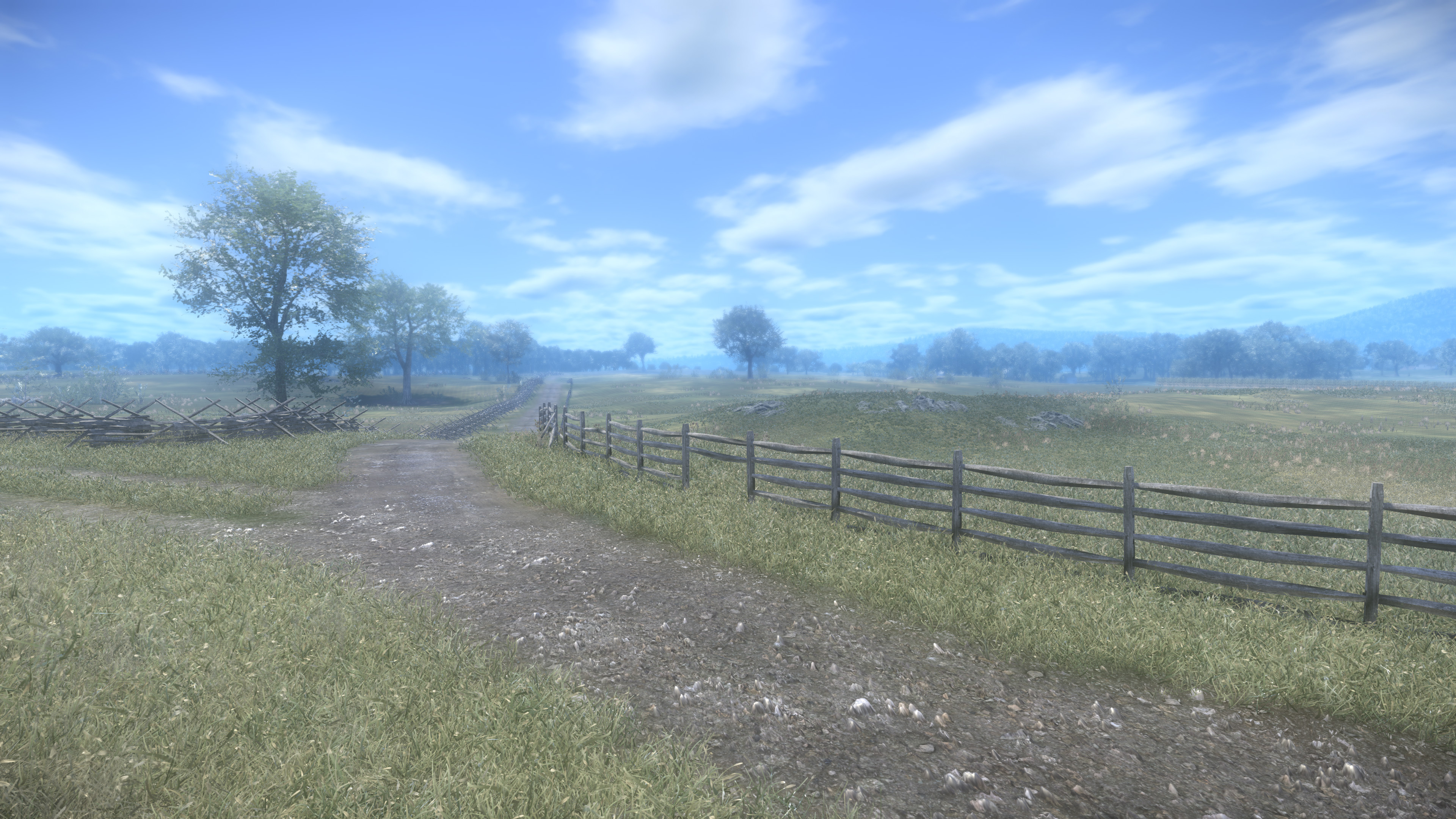 Next up is the Sunken Road or Bloody Lane as it would become known after the slaughter that happened there during the battle. The image below is captured from Piper’s Cornfield looking down on the road and with the slope behind it that functioned as a cover between the two factions until they were but a relatively few yards from each other. The Confederate spawn area is close to Piper Farm, the headquaters of General Longstreet and will require the force to navigate the Piper cornfield before arriving as the defender of the Sunken Road. 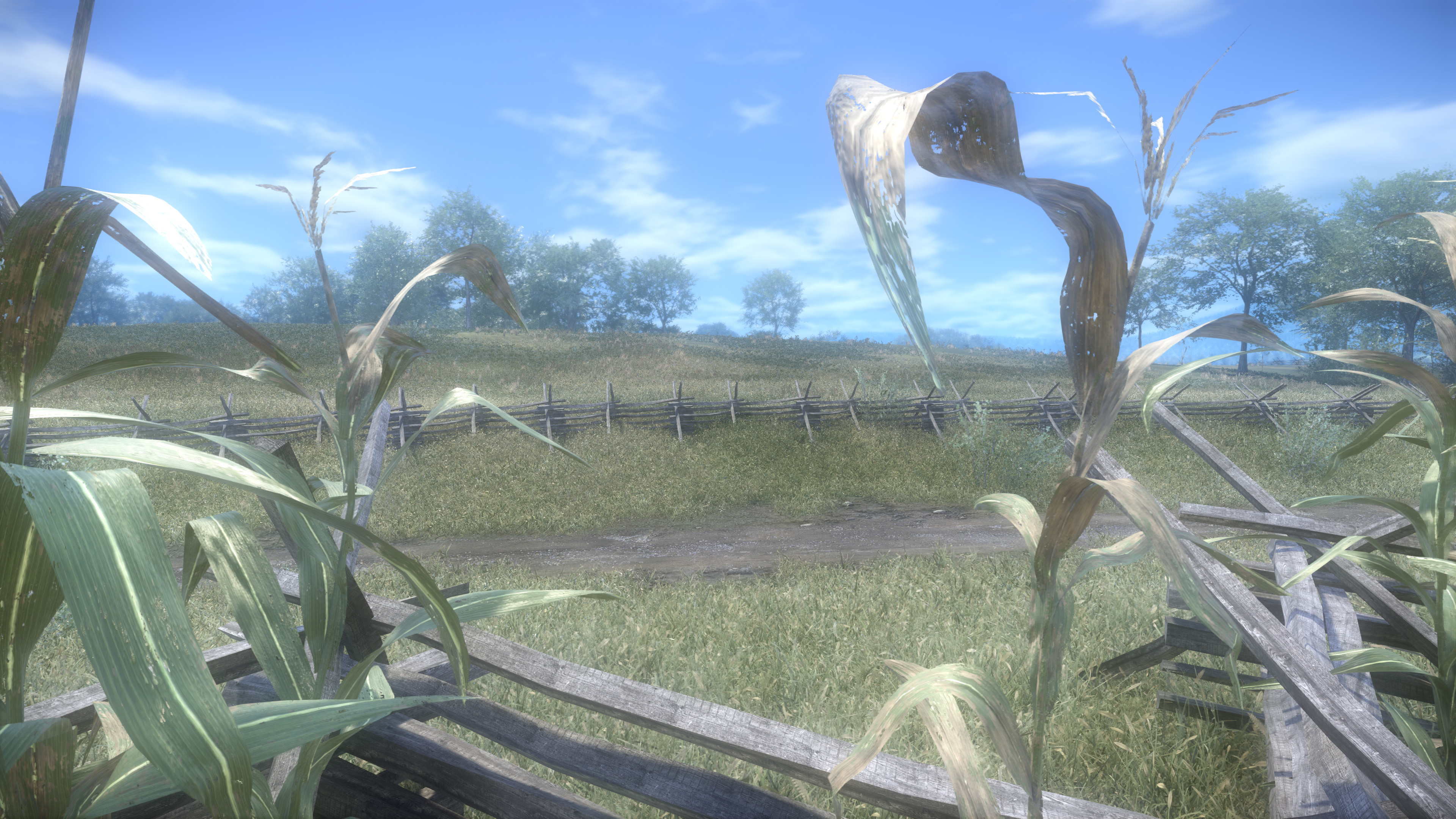 The Union forces deploy at the Roulette Farm and remains sheltered by the contours of the sloping landscape until they are faced with strong defensive position in the form of the Sunken Road. A head on charge might not be advisable and thus flanking possibilities are worth looking into. 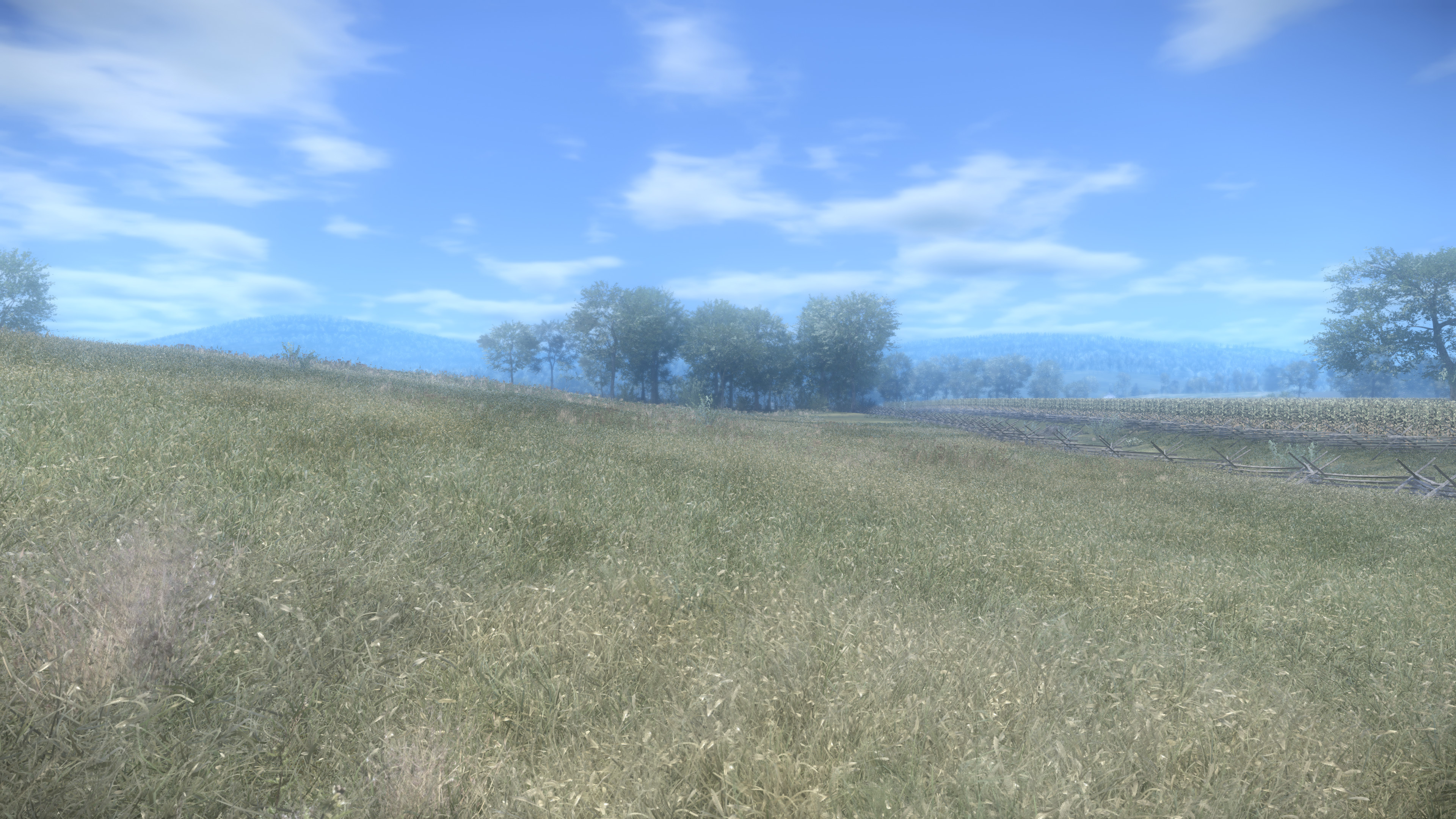 The Rohrbach Bridge or Burnside Bridge as it would be known as after the battle, proved to be quite a bottleneck for the Union forces trying to cross it and Antietam creek. The Union deploys in the vicinity of the Rohrbach Farm and must attempt to cross the bridge, capture the heights and thus force the Confederate defenders to withdraw. 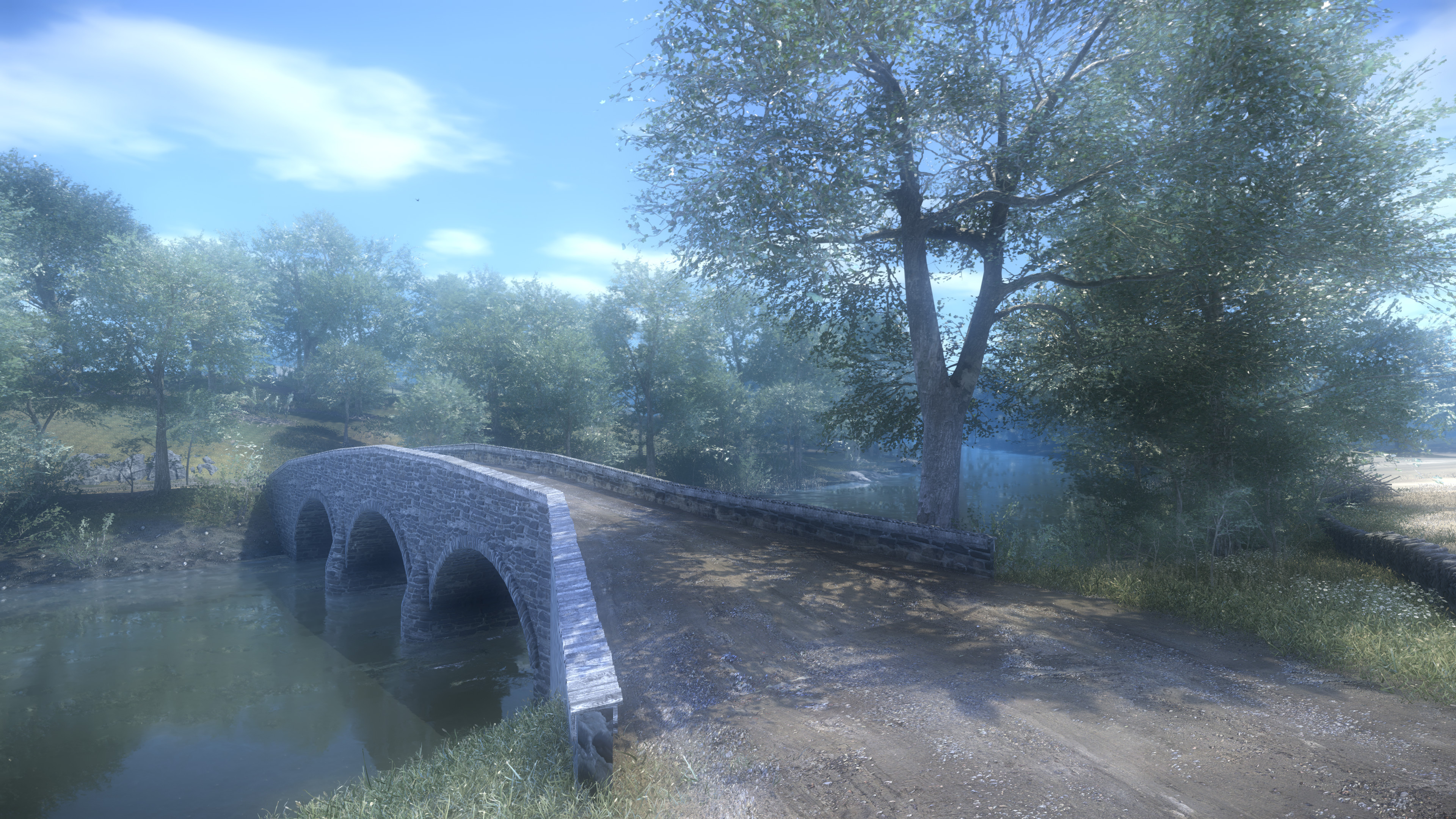 While the Confederates have a huge advantage in terms of terrain and the bottleneck of the bridge - they face some disadvantages also. The heights have quite a lot of vegetation on them making a clear shot at the bridge a bit hard to achieve from certain angles. Furthermore, the steepness of the heights, while making them hard to traverse, is also providing the attackers with some cover if they manage to cross the bridge. 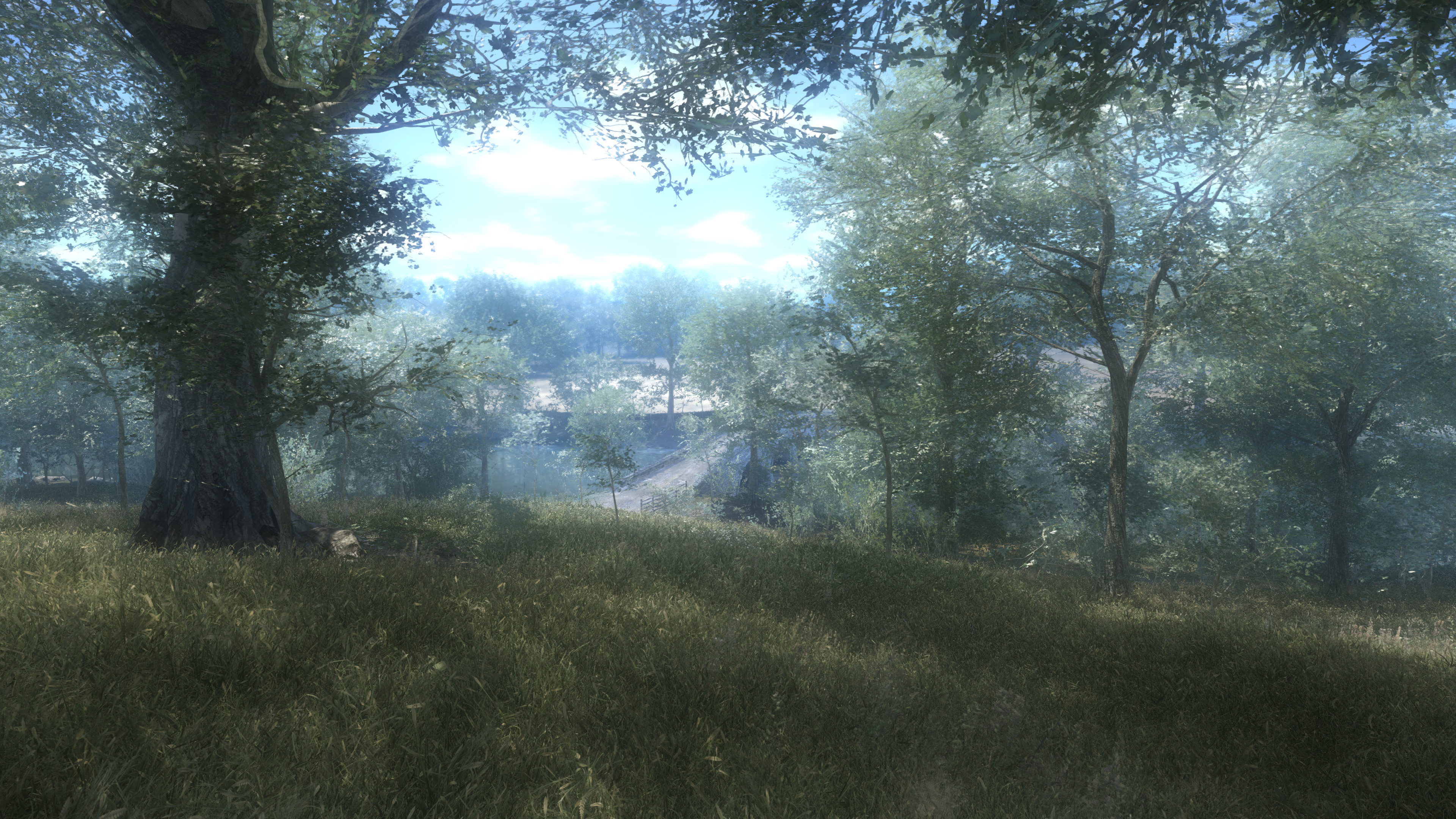 2016 has been a great year for War of Rights - the best one by far yet thanks to all of our backers and Technical Alpha testers. We cannot thank you enough for your support and dedication. Without your help finding and reporting bugs we’d be nowhere near the point at which we’re currently at (even though there are still plenty of bugs and issues!).

With close to 40 released updates since we released the Technical Alpha back in late May, including several rather big content updates and a huge engine upgrade we hope you have been able to notice a continuous improvement throughout the year even though there is no player versus player combat yet. 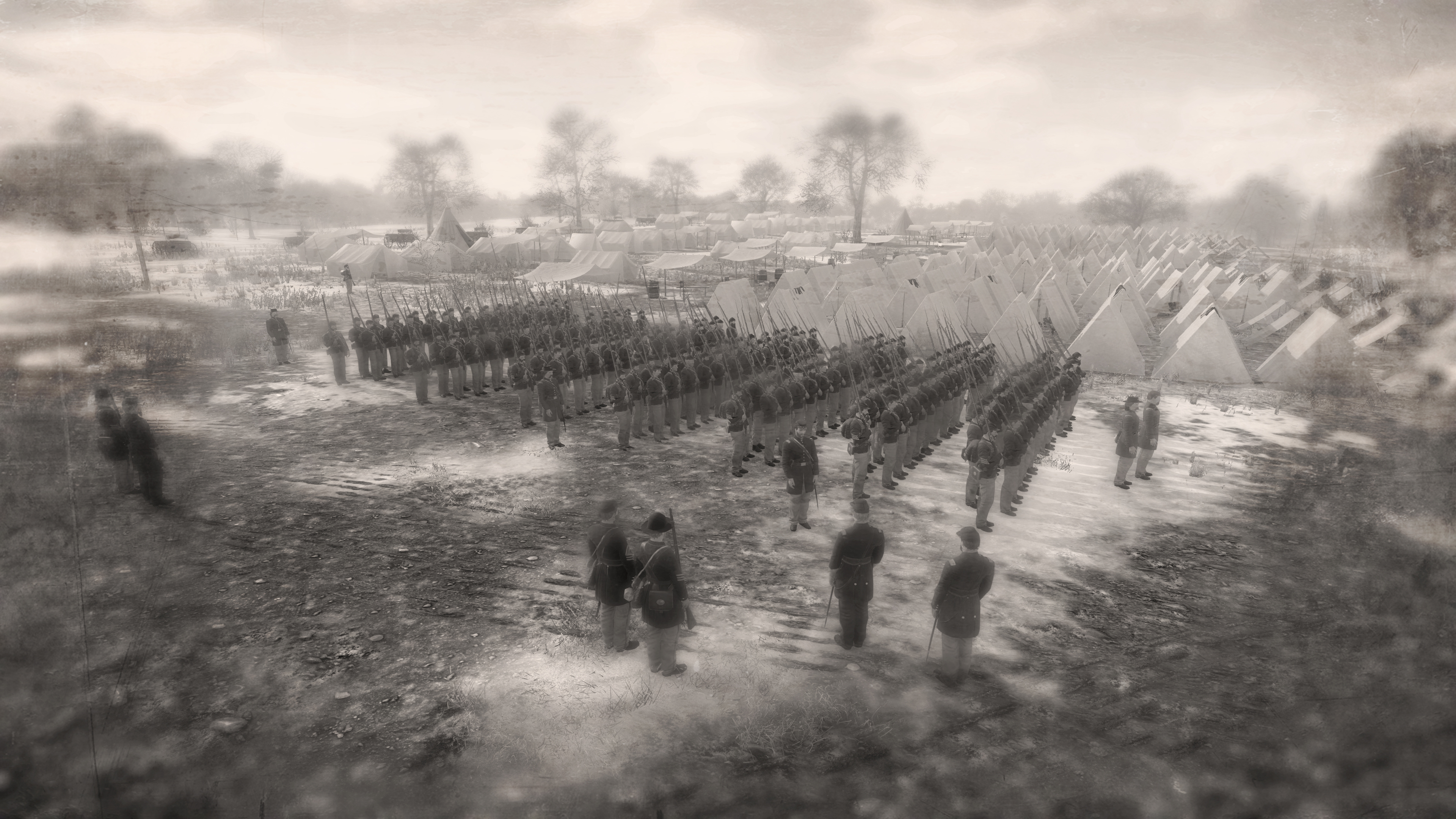 We're extremely happy to announce that today marks the release of the next big milestone update to the Technical Alpha: The game engine upgrade from CRYENGINE...

Please help us get the chance of getting funding from Crytek's Indie Development Fund that recently released by liking War of Rights following the link...

Field report about the release of our technical alpha "The Drill Camp".

I meant to say esrb

Does anybody know the Serb rating

and is it free

how do i download it or is it out

will be f2p game?

hello, I am a huge civil war buff and the game itself looks amazing. i was speaking to one of my professors about the game. And he mentioned something to me that turned on a light bulb. I was telling the professor about the realism of the game and how historically accurate the game has the potential to be. He said and i quote " The one part of the civil war that people must be aware of its the carnage and surreal atmosphere of battle. That my friend is the true realism of war." What my professor was saying is that anyone can make a game with historically accurate battle grounds. But, what separates a war game and a accurate game is the carnage of war

So true!
We see so many war games, but hardly ever the true realism of carnage is shown.
Still i do understand why most games are not realistic in that way because of severel issues.

Indie
Tags
Embed Buttons
Link to War of Rights by selecting a button and using the embed code provided more...