War of Kosovo: 2033 is first-person shooter game where it represents a war that will take place in modern times in which the year will be 2033. Since the game will be modern, the game will include modern weapons, futuristic tanks and fighter planes. Game modes are Competitive, Deathmatch, Conquest, Team-Deathmatch and in the future Battle Royale. The characters of the game will be different, representing the army of Kosovo and that of Albania. Maps are edited and created based on realistic cities of Kosovo. Ranking up is available where players rank up during the matchmaking and level up on the leaderboard on Main Menu. Each player has its own inventory where it owns its skins, weapons, animations, effects and sounds. Profile level represents the current level of the player with its information that includes kills, deaths, assists and KDA. Smooth gameplay is set-up on the game for every player for better performance during the matchmaking.

Classes and Special Skills of War of Kosovo: 2033

There are four Classes each player can use in War of Kosovo: 2033. Each class has its own role in the overall team combat, and each has their own Kit filled with unique Weapons and Gadgets.

Players can change their Classes before respawn and customize their weapons for each Class.

There are specific weapons and gadgets for every Class.

Each role has their own special skill :

See how Game Mechanics work inside War of Kosovo: 2033

The Release Date have been Postponed

The release date have been postponed due to some unfinished features that the game currently misses them. We are sorry to announce this but we promise...

There will be different weapons on each class. These weapons showed below are officially accepted and will be ready to be shown on players hands on the... 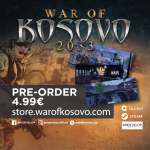 Tags
Embed Buttons
Link to War of Kosovo: 2033 by selecting a button and using the embed code provided more...